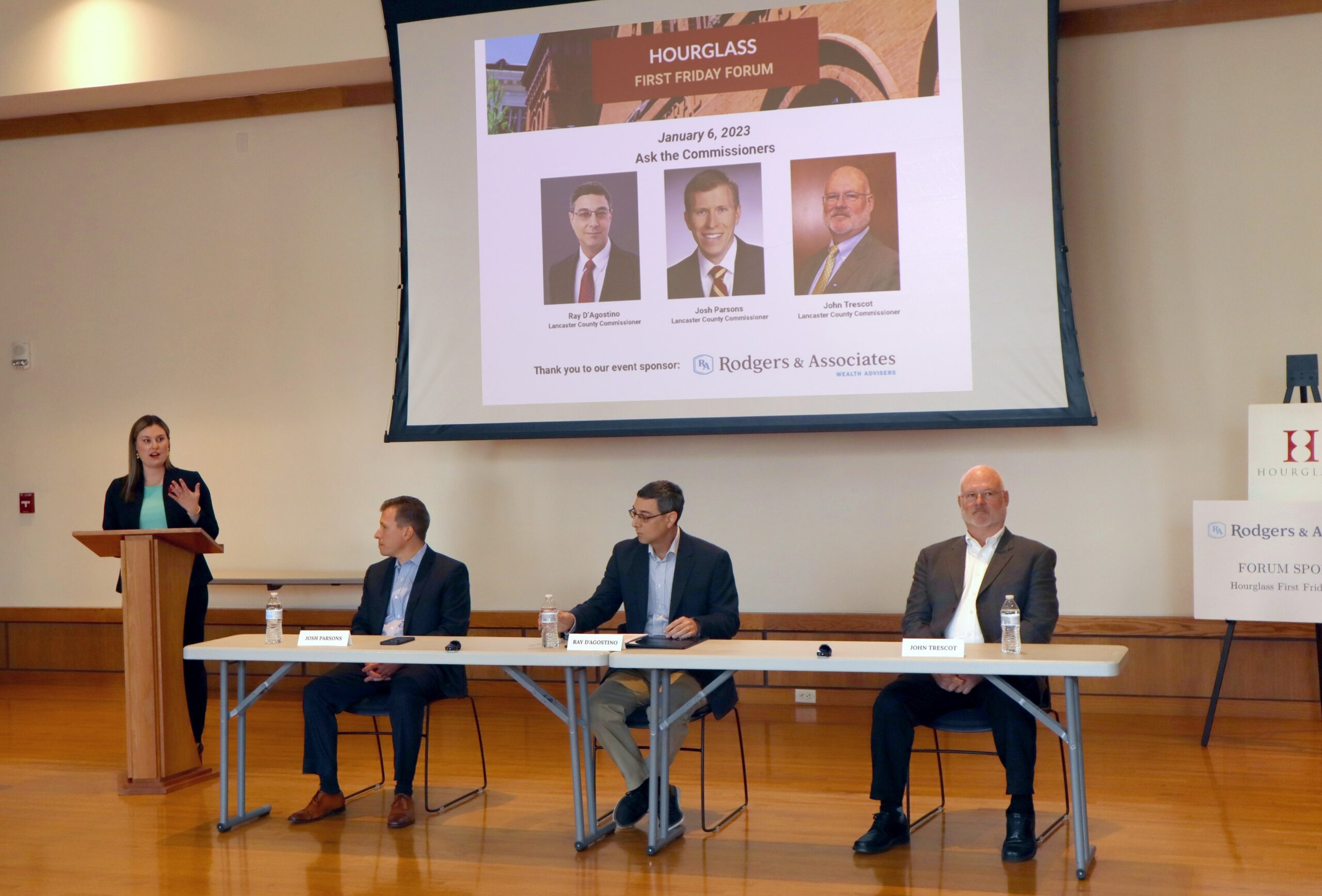 Lancaster County government is working effectively on behalf of its constituents, the three county commissioners told their audience at Hourglass’ First Friday Forum.

“We’re just proud and happy and excited about where Lancaster County is,” Commissioner Josh Parsons said.

Hourglass is a nonprofit devoted to disseminating information and encouraging collaboration and innovation to protect Lancaster County’s quality of life. It hosts monthly First Friday forums with community leaders. For more than a decade, each annual series has kicked off in January with a session featuring the commissioners.

Here are five takeaways from this year’s event:

In 2021, turnover in county government was about 25% — “not a very sustainable model,” Commissioner John Trescot said. So, the county undertook a comprehensive salary study, headed by Human Resources Director Michelle Gallo (who has since departed for Chester County), looking at how to standardize and regularize job classifications and groupings and bring salaries into line with peer counties.

The study led to the county implementing a minimum hourly wage of $15 last year, a change that affected about 300 positions. This year, it is implementing its new salary structure, with raises in some cases of 15% to 20%. They are being implemented in three stages: 50% on Jan. 1, 25% mid-year and the final 25% next January.

The early signs are promising, Trescot said: Turnover dropped in the last quarter of 2022 and the county ended the year with fewer unfilled positions. He said he’s hoping for retention to improve further in 2023.

In 2022, Lancaster County acquired land for a new correctional facility and began the planning process. Officials hope to break ground in spring 2024 and complete construction in 2026.

The Lancaster Township site is “perfect,” Parsons said: It’s secluded and bounded on three sides by the Conestoga River. The recent release of the project’s needs assessment sets the stage for discussions of new facility’s size and features, and public input will be part of that.

A needs assessment is a snapshot of current data, Trescot said: A previous one, undertaken in the mid-1990s, projected that Lancaster County would be housing 1,926 inmates in 2020, Trescot said. Today’s average population is below 800, thanks to reforms that reduced the time defendants spent waiting for trial. (Parsons, then clerk of courts, was instrumental in developing and implementing those changes.)

Ultimately, judicial policy rests with the court system, and no one has a crystal ball to predict what changes may be in store, Trescot said. The planning team’s job is thus to design the best correctional facility they can with the information available, “and make it so it works well for the next 40 years,” he said.

As for the existing County Prison site, the county hopes to sell it as soon as it’s vacant to someone who will make “great use” of it, Commissioner Ray D’Agostino. But it’s up to city government to rezone the site and work with a developer to repurpose it, he said.

Lancaster County, like much of the country, has a shortage of affordable housing and is seeing sharp increases in rents.

Housing isn’t just a government responsibility, D’Agostino said. Indeed, he said, government has made matters worse: These days, regulation can account for one-third to one-half of the cost of construction. Asked to drill down to specifics, he cited the added regulations on affordable housing, over and above what is required of market-rate development.

Noting that municipalities have jurisdiction over zoning and land use, he said the county Planning Department has been working with them on more regional approaches to housing and economic development. A positive development, he said, is the move of the Lancaster County Homelessness Coalition to the county Redevelopment Authority. Along with more federal money, “you will see greater synergies,” he said, enabling better planning, more thorough data collection and analysis and improved client services.

The limits of county government

Some important issues largely lie outside the scope of county government, the commissioners said. Two that came up Friday are climate change and immigration.

In response to a question about climate change from healthcare administrator Alice Yoder, who has announced her candidacy for county commissioner on the Democratic ticket, Trescot said the county can ensure its buildings and fleets are energy efficient and continue to support land preservation and good environmental practices, but other levels of government have primary responsibility for taking the lead.

Similarly, responding to a question from Matt Johnson of Church World Services about how to make Lancaster County more hospitable to new arrivals, Parsons said immigration is a federal issue, not a local one.

Organizations like CWS are continuing Lancaster County’s tradition of welcoming newcomers from around the world, and “we should all be proud about that,” Parsons said. He said there should be a pathway for legal immigration, but within a framework that assures it’s beneficial both for immigrants and the communities receiving them.

“We should all also be opposed to illegal immigration,” he said.

Asked to define the county’s character, Parsons said it’s not just the area’s agricultural heritage, but also things like Lancaster city’s cultural vibrancy. It’s good to be a growing county, he said, but it’s important that growth be managed.

“I think we’re striking the right mix,” he said, but conceded that not everyone might agree, such as residents in areas with high traffic congestion.

The three commissioners noted the county’s investments in preserving farmland and undeveloped land and restoring waterways, as well as the work of third parties such as the Lancaster Conservancy and Lancaster Farmland Trust. Trescot said he’s concerned about maintaining the economic viability of preserved farms, so they can remain in use and be passed down as a productive asset from generation to generation.

Lancaster County is an exceptionally caring and resilient community, D’Agostino said: “We have a spirit here that, quite frankly, you’re not going to find anywhere else.”