In this image from online video, members of Lancaster Stands Up present a paper banner of comments collected at a public event to the Lancaster County commissioners on Wednesday, May 4, 2022. (Source: Lancaster County) 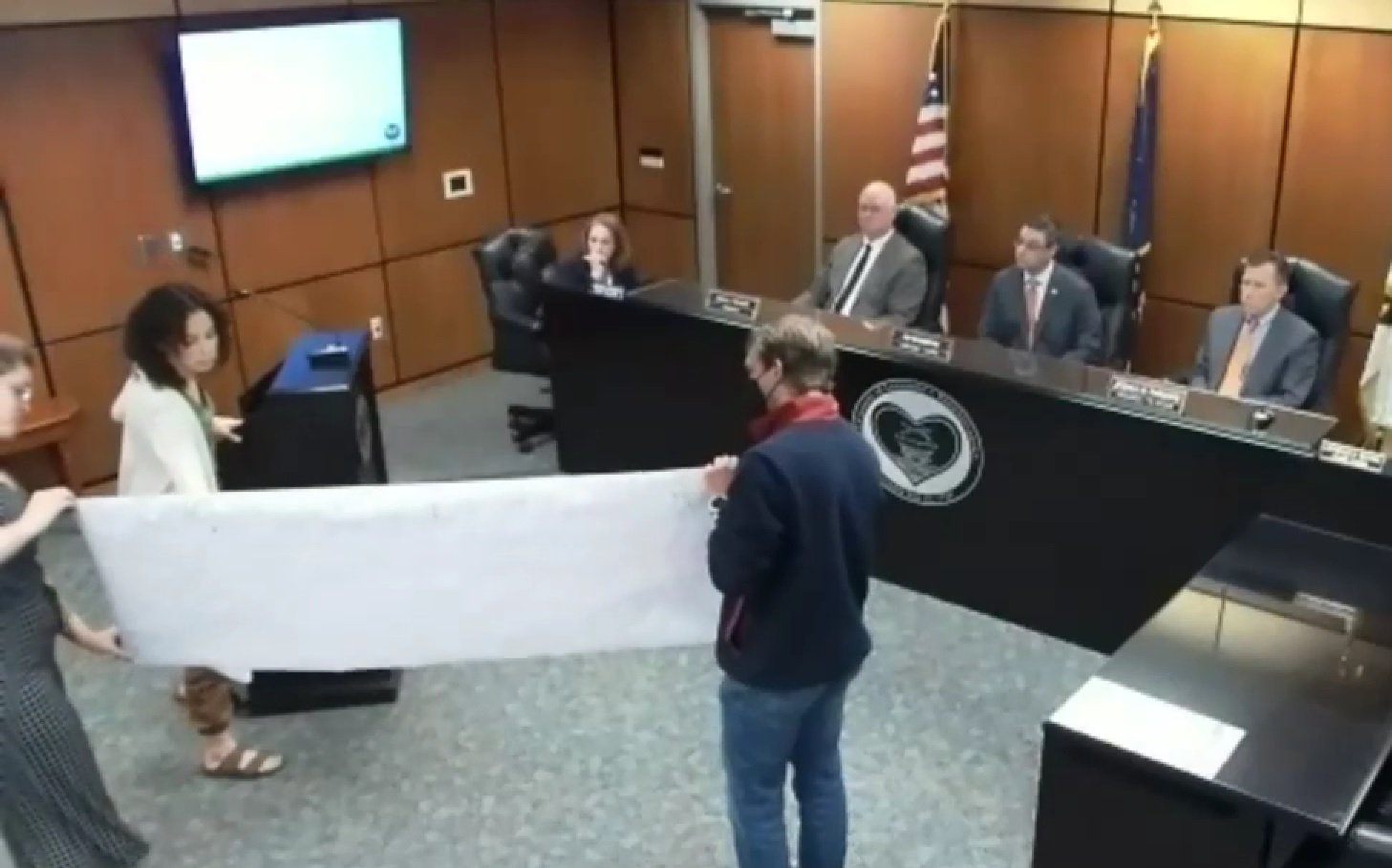 In discussing his objections to YWCA Lancaster’s advocacy on political issues, Commissioner Josh Parsons said on Wednesday that he hadn’t known the organization was behind the Lancaster Votes voter-registration initiative until YWCA’s Chief Equity Officer Adam Hosey brought it up during his comments opposing removal of the county’s ballot drop box.

Looking online, Parsons said, he found numerous partners listed on Lancaster Votes’ website, including the city and county Democratic committees and Lancaster Stands Up, which he described as “a socialist, communist organization.”

It would never be appropriate for the county to partner with a political committee that way, he said, and nor is it right for “purportedly nonpolitical nonprofit organizations” to do so. YWCA Lancaster’s Lancaster Votes partnerships deserve scrutiny, he said.

Parsons and fellow Republican Ray D’Agostino both said this week that they are unwilling to consider YWCA Lancaster for county contracts in future unless it ceases political activism. D’Agostino joined Democrat John Trescot Wednesday in approving a contract for YWCA’s Parent Empowerment Program as part of a larger social services package but said he did so only to avoid disruption to families served by the program. Parsons voted against the contract award.

Asked at Wednesday’s meeting about his characterization of Lancaster Stands Up by Have a Heart for Persons in the Criminal Justice System member Jonathan Fox, Parsons said that’s how the organization identifies itself.

As illustration, he cited a paper banner submitted by Lancaster Stands Up members at the commissioners’ May 4 meeting. It includes a small hammer-and-sickle drawing and statements such as “Revolution” and “Watch your back, 1917 can come twice,” a reference to the Russian Revolution.

On Thursday, he posted images of those portions of the banner online, condemning both “the implied threat of violence against the Board of Commissioners” and the lack of media attention given it.

Other conservative critics of Lancaster Stands Up have described it as socialist, noting statements on social media and its support for Bernie Sanders’ campaigns.

Founded in the wake of the 2016 election, Lancaster Stands Up is avowedly progressive and advocates much greater social spending and attention to the welfare of working-class and minority communities. Asked about the group’s orientation, organizer Eliza Booth referenced the mission statement on its home page, which says Lancaster Stands Up is a “grassroots force” that is “founded on a commitment to the common good” and is mobilizing and “taking back our democracy” from elite interests.

The statements on the banner didn’t come from Lancaster Stands Up leadership, Booth said in an email. The banner began as a blank sheet at a public event “where anyone and everyone was invited to tell the county commissioners how they would like to see the county’s ARPA money spent.”

“Is it ‘communist’ to demand that our elected officials should use ARPA funds for their intended purpose — to provide support and economic relief for Lancaster County’s working families?” she said.

“Instead of seeking out feedback from the people of Lancaster County on important questions like ARPA spending, Mr. Parsons is attacking us for doing so. It is unbecoming of an elected representative to so frequently attack his constituents, rather than respecting and listening to them.”

Parsons said Thursday he stands by his condemnation of the banner.

“Lancaster Stands Up submitted this document to the Board of Commissioners as their document at a public meeting,” he said in an email. “In fact, they were very proud of it.  There is no question it represented their positions.  It contains an inferred threat of violence against us.  … [T]his would be huge news if it were a conservative group submitting that to elected officials.”

Update: After this article was posted, Lancaster Stands Up provided One United Lancaster with an image showing more of the banner:

In a statement, YWCA Lancaster CEO Stacie Blake and spokesman Aaron Spangler said Lancaster Votes was launched in 2020 in recognition of the centenary of women’s suffrage. It was felt to be needed in part because the local League of Women Voters was no longer active in voter registration.

“YWCA Lancaster (Stacie Blake personally) made calls to both party headquarters with the invitation to participate,” the statement said, adding that “voter registration efforts happened leading up to the 2020 election, with limited options due to Covid.”

Lancaster Votes was reactivated this spring, YWCA Lancaster said, in part with the idea of registering newly naturalized U.S. citizens after their naturalization ceremonies.

“In an abundance of caution,” Lancaster Stands Up and the Democratic committees were removed from the Lancaster Votes website “to ensure there was no confusion or feeling of influence,” it said.

Parsons said it was the community’s increased interest and questions that led to removing Lancaster Stands Up and the Democratic committees from the Lancaster Votes partner list.

“This indicates they knew what they were doing was wrong,” he said.

Kirk Radanovic, chairman of the Republican Committee of Lancaster County, said the committee has no record of a call from Blake.

“To exclude us from the initiative is a great disservice to Lancaster County’s voters, a majority of whom share our values,” he said.

Diane Topakian was the chair of the Lancaster County Democratic Committee in 2020. She confirmed the partnership with YWCA Lancaster on Lancaster Votes.

Booth said Lancaster Stands Up had no part in setting up or running Lancaster Votes. Her group’s involvement, she said, was limited to loaning out some tables and chairs and sending “a couple of emails to our email list letting them know about the volunteer opportunity.”