Lancaster County’s mail-in ballot drop box is seen at the entrance to the Lancaster County Government Center shortly before its removal on Monday, May 16, 2022. (Photo: Tim Stuhldreher) 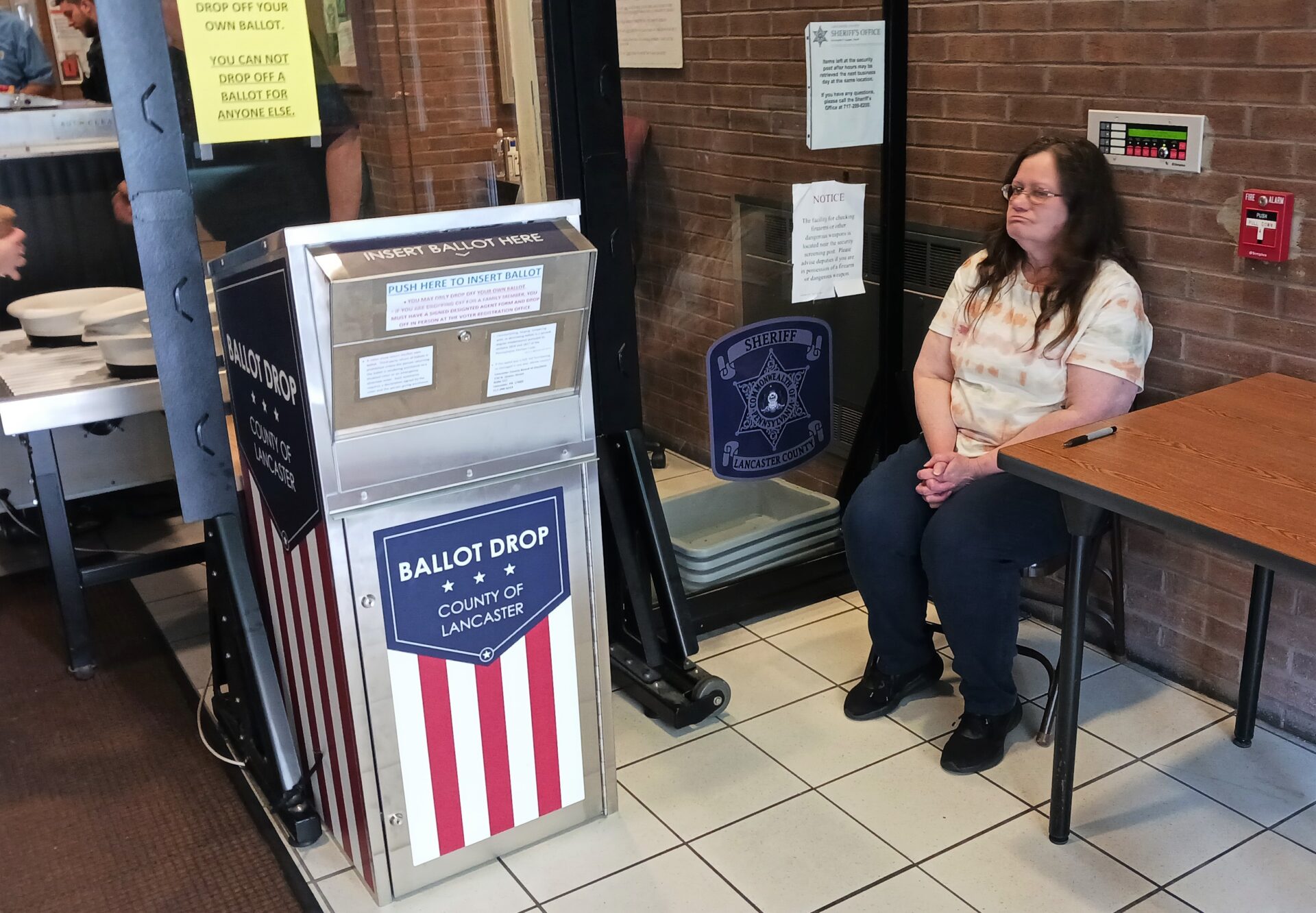 Lancaster County's mail-in ballot drop box is seen at the entrance to the Lancaster County Government Center shortly before its removal on Monday, May 16, 2022. (Photo: Tim Stuhldreher)

Acting in their capacity as the Board of Elections, Lancaster County's two Republican commissioners voted Monday to remove the mail-in ballot drop box in the entry of the county Government Center.

Shortly afterward, the drop box, which had been re-installed Friday, was once again removed, less than 24 hours before the opening of polls Tuesday for Pennsylvania's primary election.

Commissioners Josh Parsons and Ray D'Agostino acted Monday in response to Judge Leonard Brown's order Friday granting a preliminary injunction in a lawsuit filed earlier that week. The suit, filed by the American Civil Liberties Union on behalf of two county plaintiffs, alleged the commissioners' decision on April 13 to remove the drop box was an official action requiring advance notice in an agenda under Pennsylvania's Sunshine Act.

The commissioners had argued it was an administrative move or a "de minimus" action, and that advance notice wasn't required. Brown ruled that the plaintiffs were likely to prevail in court, and were entitled to have the drop box replaced in the interim, until and unless the Board of Elections conducted a properly advertised vote to remove it -- which the board did Monday.

One United Lancaster saw two voters place ballots in the drop box shortly before the 11 a.m. Elections Board meeting. Ballots placed in the drop box will indeed be collected and tabulated in Tuesday's election, D'Agostino confirmed. 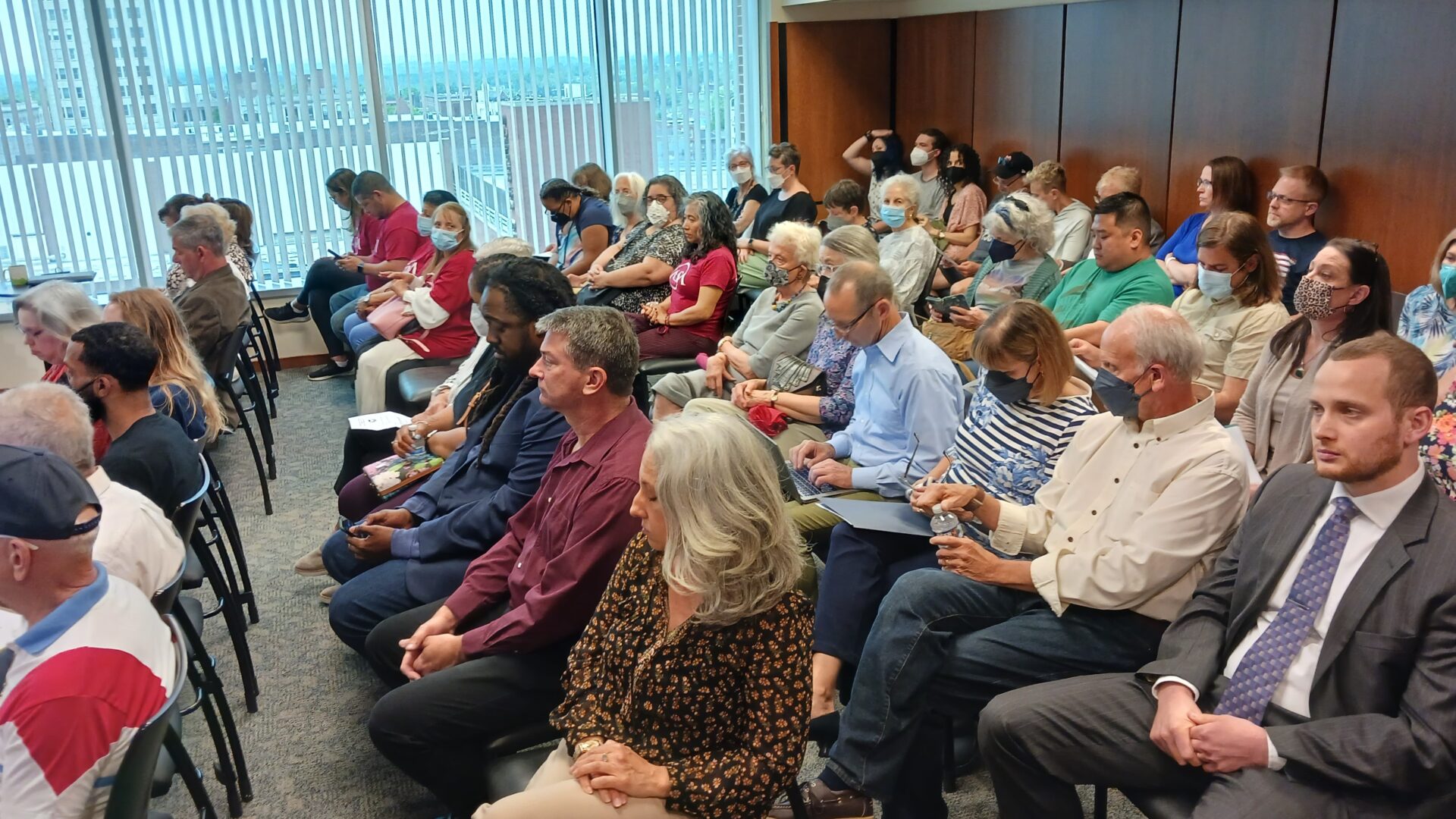 Members of the public fill the Lancaster County commissioners' conference room for a Board of Elections meeting on Monday, May 16, 2022. (Photo: Tim Stuhldreher)

More than 30 members of the public spoke to the Elections Board before the vote. While most condemned the pending removal of the drop box and called for keeping it, if not adding more, half a dozen spoke in favor of the removal.

Kirk Radanovic, chair of the Republican Committee of Lancaster County, told the commissioners that "176,000 Republicans are behind you."

"We expect you to remove the drop box," he said.

The only things the drop box makes it easier to do are "ballot harvest and cause fraud," he said.

Proponents of the drop box vehemently disagreed. Melody Yoder Salim described her husband driving her to the Government Center to deposit her ballot in the drop box when she was under treatment for cancer and said she couldn't have voted otherwise. Other speakers cited long work hours, disabilities and unreliable postal service as reasons the drop box is needed.

Leaders from the Lancaster County Democratic Committee, League of Women Voters and local NAACP branch all asked the commissioners to reconsider. The NAACP considers drop boxes an important option for people who lack access to polls on Election Day and is "deeply disappointed" in the commissioners' resolution, President Blanding Watson said.

Regardless of the motives for removing the drop box, thousands of constituents will perceive it as disenfranchisement, Lancaster City Council President and Democratic state House candidate Ismail Smith-Wade-El said.

Diane Topakian, chair of the Lancaster County Democratic Committee, called the resolution a "sham." Republican votes may have elected you, she told D'Agostino and Parsons, but you serve all county voters, including Democrats.

One speaker on Monday, Dan Medbury of the John Birch Society, asserted, "There has been huge fraud" due to mail ballots and drop boxes, citing the film "2000 Mules." The film, produced by conservative Dinesh D'Souza, makes dramatic claims of voter fraud that are unsupported by the evidence.

Drop box proponents vehemently contested the notion that they facilitate fraud. Such fraud "is not an actual real problem," said Adam Hosey, a former judge of elections and chief equity officer of YWCA Lancaster.

Election experts concur, and the Trump campaign's allegations of widespread fraud in the 2020 election did not hold up in court.

Topakian and Cathy Walker read statements, respectively, from the lawsuit plaintiffs, Jon Foley Sherman and Brian Frey. Both forcefully objected to the notion that the convenience afforded by the drop box is inconsistent with free and fair elections.

The two Pennsylvania counties closest in population to Lancaster County, Chester and Delaware, have 13 and 42 drop boxes, respectively, said Duncan Hopkins, an organizer with progressive group Lancaster Stands Up. Lancaster County should be adding drop boxes all over, he said, calling the removal of the county's sole drop box on the eve of the election "wildly insulting."

Commissioner John Trescot, a Democrat, did not attend Monday's meeting. He was out of the country on a previously planned trip, D'Agostino said. 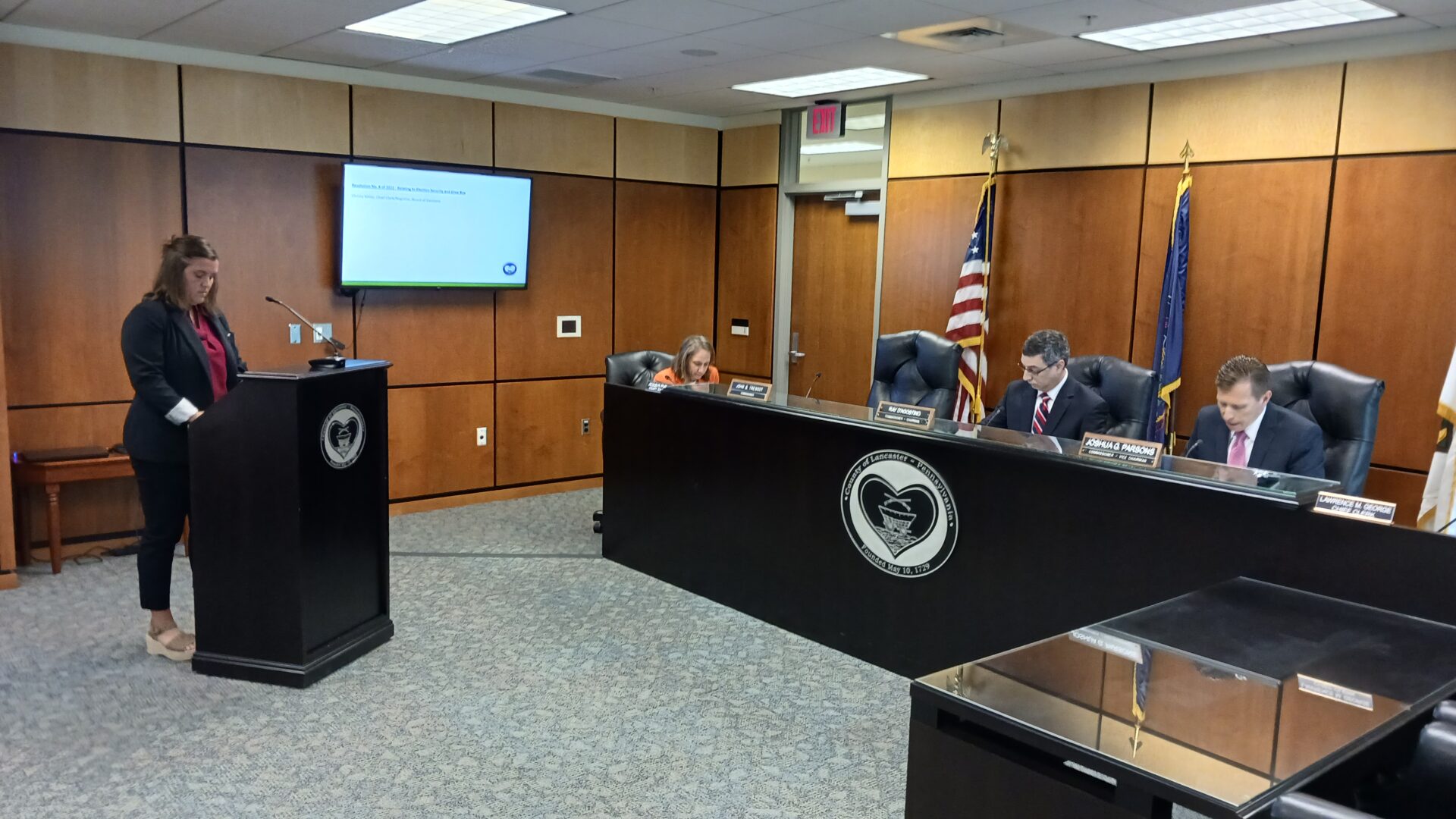 For their part, commissioners D'Agostino and Parsons reiterated the reasons they have given before for removing the drop box: That doing so bolsters confidence in election integrity, and removes an opportunity for individuals to break the law, on purpose or otherwise, by dropping off ballots other than their own.

"Whatever your position is on this, can we all agree that people should not be accidentally criminalized and face potential jail time for something they did not know?" Parsons said.

If someone can drop off someone else's ballot at a drop box or mailbox, that's a weakness in the chain of custody, D'Agostino. The county has no control over mailboxes, but it does have authority over whether to have a drop box, he said.

"I get you all want convenience ... but at the cost of what?" he said.

Besides removing the drop box, the board's resolution (PDF) calls on the state legislature to repeal Act 77, the law that authorized no-excuse mail voting, and to pass voter ID.