This rendering shows the facade of the former St. Joseph Hospital building at the corner of College Avenue and West Walnut Street after its conversion into apartments. (Source: Alexander Design Studio | Lancaster city Historical Commission) 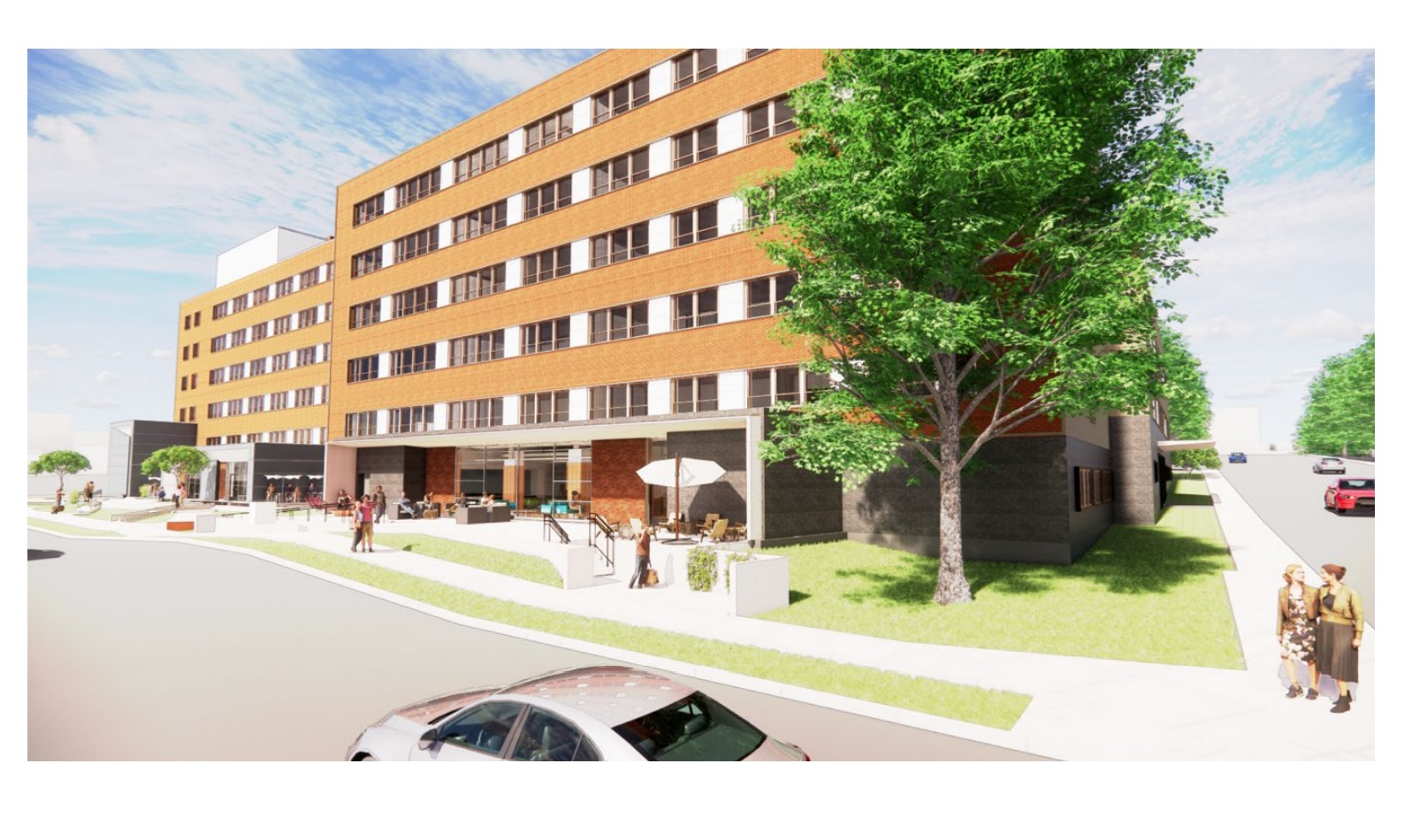 Lancaster city’s Historical Commission gave its blessing to the private-sector components of the St. Joseph Hospital campus redevelopment on Monday.

By a unanimous vote, the commission recommended that City Council approve demolishing some of the vacant hospital buildings, renovating others and allowing the construction of dozens of townhomes on the property’s west side.

The commission’s action moves the matter forward to City Council, which is expected to take it up next month. Council’s OK is a key step in allowing the project to go forward; the developers have to secure other approvals as well, in particular that of the Planning Commission.

If all goes smoothly, construction would start in early 2023, and wrap up toward the end of 2024, said Dominic Wiker, vice president and director of development at Washington Place Equities.

The portion of the hospital complex at the corner of College and Walnut streets is to be converted into a 169-unit apartment complex.

The planned work includes demolishing the hospital’s porte-cochere entrance and several other additions to the original 1952 facade and restoring the latter to essentially its original design. The cross that adorns the top story overlooking the facade is staying “for sure,” Wiker said.

Behind the complex, Washington Place plans to site 53 townhomes, in an area that is currently an abandoned parking lot.

One neighborhood resident, Pamela Stoner of Marietta Avenue, asked the commission to think twice about approving them, calling their design pedestrian and unimaginative.

“Is this truly the best we can do?” she asked.

The Historical Commission voted separately on the two components of the project. Chairman Christopher Peters is the architect for the townhouses; he presented that phase to the commission and recused himself from both votes.

The remaining one-eighth or so of the block is the site of the former hospital’s Delp wing, which nonprofit HDC MidAtlantic intends to renovate into a roughly 30-unit affordable housing complex.

That is a separate project on what is now a separate 0.75-acre property, having been subdivided from the rest of the block; and Washington Place Equities is not involved, although it and HDC are communicating and are familiar with each other’s plans, Wiker said.

The total cost of redeveloping the defunct campus has been estimated at $90 million. Washington Place Equities’ share of that is about $75 million, Wiker said.

The Delp wing is the second of four potential HDC projects in the neighborhood.

Just east of the St. Joseph campus, HDC is moving forward with plans to build The Apartments at College Avenue, a $16.4 million, 64-unit affordable housing project.

Additionally, it has property at 838 Marietta Ave. where it hopes to build 46 to 50 units of affordable housing; as well as a site on nearby Wheatland Avenue, for which plans remain to be determined.

Taken together, the projects amount to the largest commitment to affordable housing in Lancaster in nearly half a century. City Hall advocated for repurposing the hospital campus and surrounding sites as housing and spent just under $1 million to acquire the 838 Marietta Ave. property on HDC MidAtlantic’s behalf.