For all practical purposes, the COVID-19 virus no longer poses a threat to most Lancaster County residents.

New cases have dropped into the single digits – five to eight per day this past week. At month’s end, there were just three people hospitalized with the virus at Penn Medicine LGH and four at WellSpan Ephrata. None were in critical care or on ventilators.

How different that is from just a month ago, when there was an average of 60 new cases and 60 hospitalizations each day. And it was just a half-year ago, at the peak of the pandemic in December, that Lancaster County was averaging 365 new cases and 131 hospitalized patients every day. 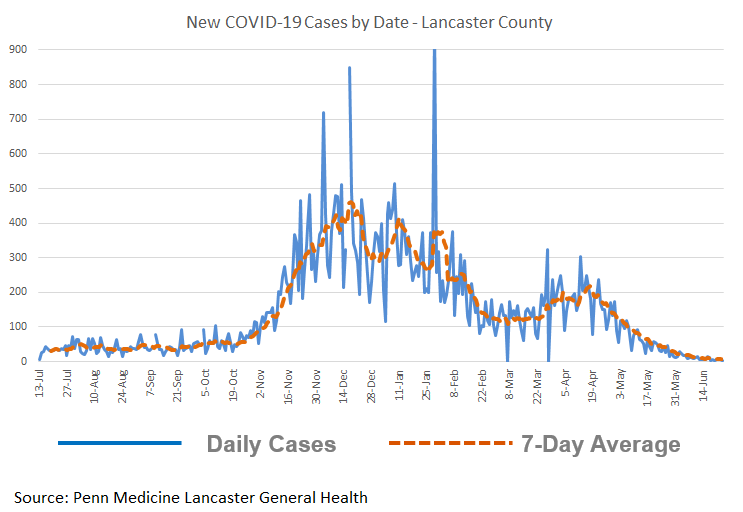 In part, the decline in cases can be attributed to the arrival of warm weather. A year ago, following a pattern typical for flu viruses, infections and hospitalizations fell steeply in June and stayed at low levels through September. That cycle seems to be starting again this year.

But the high rate of vaccination here almost certainly has contributed to the decline in cases. Nearly 60% of the county’s 550,000 residents have now been inoculated. Among the most susceptible to the disease – those over age 65 – more than 90% have been vaccinated at least once and 80%-plus are fully vaccinated.

The decline of the virus has also reduced the number of deaths here. Nine county residents died in June, a sharp drop from 31 deaths in May and 207 in December, according to records from the county Coroner’s Office. Put another way, about six to seven people were dying of the virus every day in December. In June, there was one death about every three days.

Significantly, only one of those who died in June was a resident in the county’s nursing homes, the epicenter of the pandemic during last year. And both nursing and personal care homes reported few new cases among staff or residents, a sign that the low death rate will continue.

With the number of cases, hospitalizations and deaths so low, there is little reason to continue our reporting. This report will be our last, unless there is a new outbreak of the virus.

Our research group thanks the many public information officers who assisted us with our reporting. Among them those of: Penn Medicine Lancaster General Health, WellSpan Health Ephrata, the Lancaster County Information Technology Department, the state Health Department, the state Human Services Department, and the U.S. Centers for Medicare & Medicaid Services. Our special thanks to Dr. Stephen Diamantoni, the county coroner, and his Chief Deputy, Eric Bieber.