All measures of the COVID-19 virus declined in May, signaling that the pandemic may be near its end.

• DEATHS of county residents fell to fewer than one each day, slightly less than in March and April, and substantially below the four to five deaths per day in January and February. Notably, there were no deaths in the last week of May (nor first three days of June.)

• HOSPITALIZATIONS at Penn Medicine Lancaster General Hospital (LGH) and WellSpan Ephrata dropped from 58 COVID patients on May 1 to just 16 at month’s end.

• DAILY NEW CASES in the county plunged eight-fold, from 132 to 16 between the first and last day of the month.

Clearly, the surge in new cases and hospitalizations that occurred in April – following Easter celebrations and relaxation of restaurant capacity rules – has ended, and the decline of the virus that began in January has resumed.

The reduction in serious cases and deaths especially was visible in the county nursing and personal care homes, where already low numbers fell lower.

The Centers for Medicare and Medicaid Services (CMS) reported just eight new cases among all nursing home residents, down from nine in April. (There had been 289 cases in January.) Staff cases fell by half, from 59 in April to 28 in May.

Dr. Stephen Diamantoni, the county coroner, reported three deaths in nursing homes in May, the same as in April. Those deaths were a fraction of the nine deaths in March, 35 in February and 70 in January.

"I think that the number of cases has significantly declined. The number of deaths has certainly declined," Dr. Diamantoni, said today.

"It's hard to know if we're near the end," he added. "If there are more variants, if there are unvaccinated people, we'll still have some cases, but nothing near past levels."

The decline of the virus in the entire county population corresponds to the increase in vaccinations here.

Thirty county residents died in May, down from 34 in April:

Since the start of the pandemic, there have been no deaths here of children or teenagers. There has been one death of a person in his 20s and five deaths of individuals in their 30s, all suffering other complicating medical conditions.

There was an average of 36 COVID patients in LGH and Ephrata hospitals each day in May, not quite half the average of 70 daily patients there in April. In January, the two hospitals were treating an average of 115 patients daily.

The falling numbers have continued into June: In the first three days of the month, the hospitals have averaged only 16 patients daily between them.

Perhaps the strongest sign that the pandemic is fading comes in the number of new cases – people testing positive for the virus.

In April, hospitals, doctors and clinics here were reporting an average 177 new cases daily. In May, that dropped to 63. So far in June, the daily average is just 15.

It is worth remembering that about 40-50% of new cases have no symptoms. About 8% of new cases result in hospitalization and, of those, about 7% lead to death. 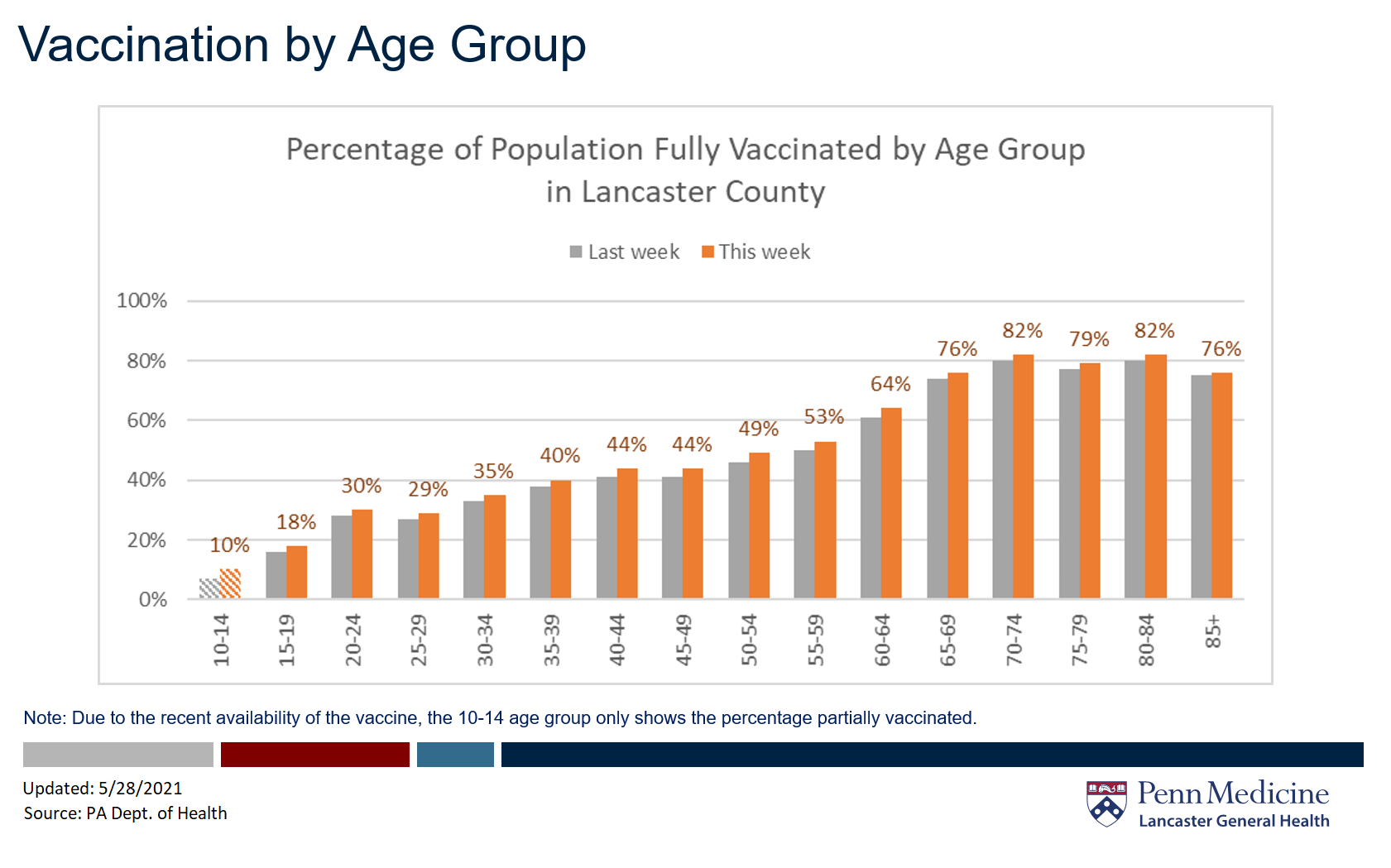 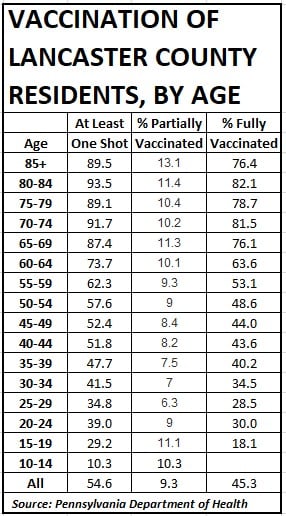 While cause and effect are difficult to prove, the sharp decline in deaths here follows the massive inoculation of the elderly population, those most vulnerable to the virus.

More than 75% of county residents age 65 and over have been fully vaccinated. An additional 10% have had their first shot and should be fully protected in the next two weeks.

There are significant differences in vaccination by gender, race and ethnicity throughout the county. The fully vaccinated numbers are:

Personal care homes reported just two cases in May, the same as in April. There had been about 200 cases in these facilities in January and February. Deaths dropped from a record high of 14 in December to one in May. Cases among staff dropped from a high of 140 in January to eight in May.

Assessing the lingering impact of COVID in nursing homes is more difficult.

Both the CMS and state Health Department reported a low number of cases, eight and 10 respectively, in nursing homes in May. That was a small fraction of the 290 monthly cases at the peak of the pandemic.

But while the CMS reported seven deaths in May, the state Health Department reported just one death. Incomplete state data and delays in reporting deaths to CMS may explain the disparity.

While the mass vaccination campaign appears to be subduing the spread of the virus, the complete re-opening of events and commerce, plus the end of mask/social distancing requirements, may bump up cases in the coming month.