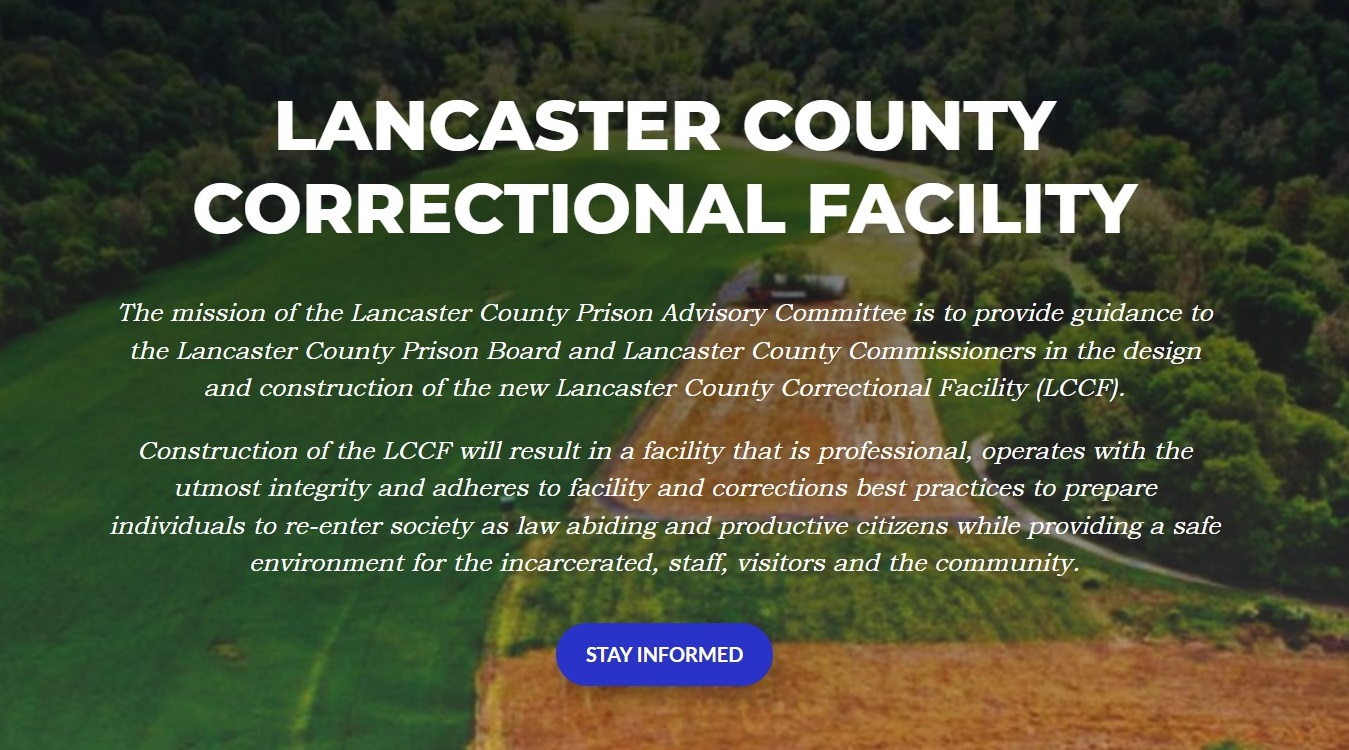 The project to replace the Lancaster County Prison has a website and the planned complex has a provisional “working” name, Warden Cheryl Steberger told the county Prison Board on Thursday.

The website, www.lccf-pa.com, will allow the public to track the progress of what is being called the Lancaster County Correctional Facility. At present, the website includes a timeline, the roster of the project’s advisory committee and an FAQ. There is also a button for submitting comments to the project’s email address, LCCF@co.lancaster.pa.us.

As more information and material becomes available, it will be posted, Commissioner John Trescot said.

The home page prominently displays the advisory committee’s mission statement. In it, the committee pledges to build a facility that provides a safe environment for all while preparing individuals “to re-enter society as law abiding and productive citizens.”

The complex’s working name may or may not end up being its official one. At the August Prison Board meeting, Commissioner Josh Parsons agreed there should be public input before the name is finalized, as local advocates have requested.

The county is working with industry giant CGL to develop the correctional facility on land near the county’s Central Park in Lancaster Township. The first step, a needs assessment, has been under way since the summer. It involves collecting extensive demographic and crime data and interviewing local stakeholders to determine what size and scope of facility to build.

The needs assessment is nearing completion, and the prison advisory hopes to present a draft at the December prison board meeting, Commissioner Josh Parsons said. The meeting is scheduled for 9:15 a.m. Dec 15 at the existing County Prison, 625 E. King St., Lancaster.

The needs assessment will go before both the Prison Board and the board of commissioners. Once it’s accepted and approved, it will be used as the basis for the next phase, programming, in which planners will establish what kinds of space are needed at the correctional facility and how big they need to be.

The question of how many beds the new facility should have is likely to be hotly debated. It needs to be large enough to accommodate the county’s expected population growth in coming decades, but advocates have cautioned against overbuilding, saying that emerging trends in bail practices, diversion programs and so on have the potential to drive prison numbers well below historic norms.

There is broad agreement on the need for ample space for education, treatment and rehabilitation programs. Space is sorely lacking at the cramped and outdated East King Street complex, and prison board members, prison leadership and inmate advocacy groups alike agree it must be a priority in the new site’s design.