The Christian Street Parking Garage rises above the two floors that will be occupied by the Lancaster Public Library. (Photo: Tim Stuhldreher) 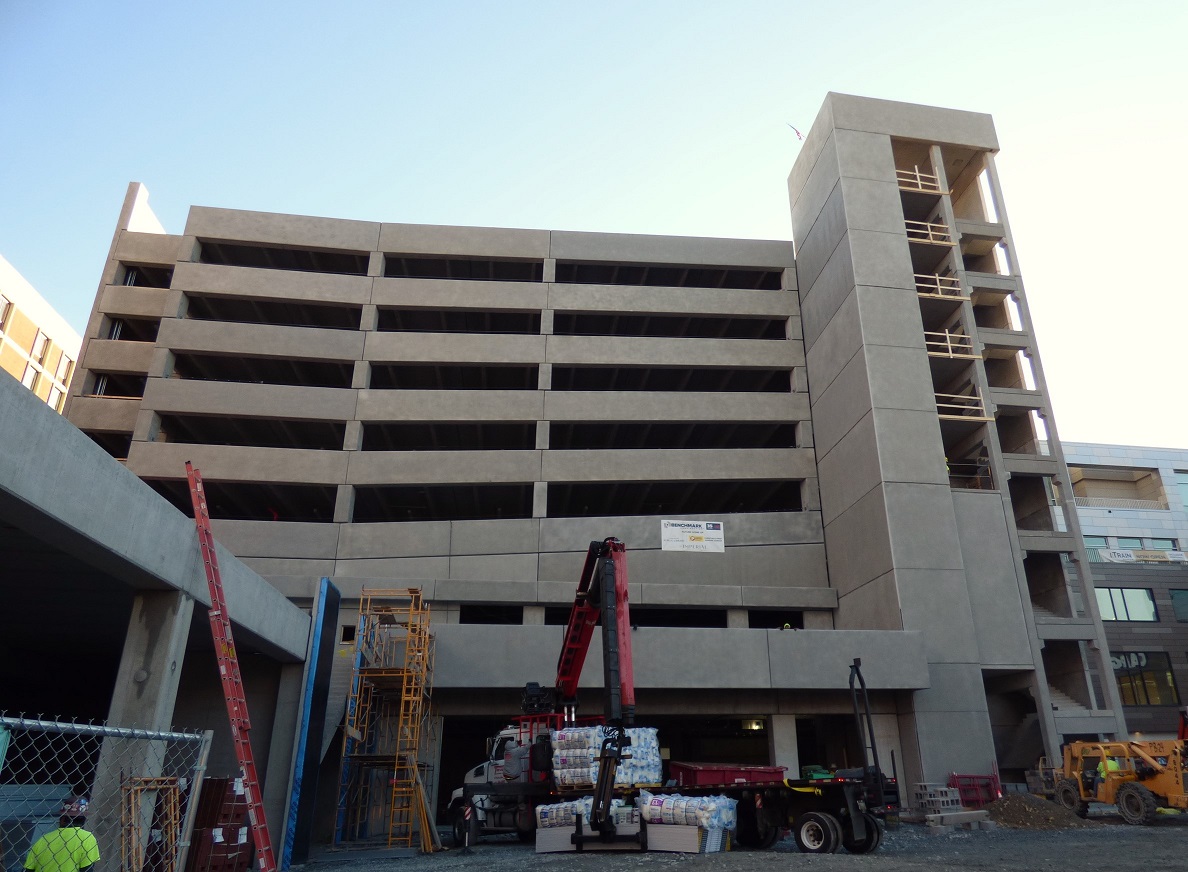 The Christian Street Parking Garage rises above the two floors that will be occupied by the Lancaster Public Library. (Photo: Tim Stuhldreher)

What was it like building the Lancaster Public Library and Christian Street Garage on the east side of Ewell Plaza?

In this case, the pieces were of precast concrete, each weighing tons, moved to the site on flatbed trucks and hoisted into place by crane. The final piece was placed in late August.

Last week, One United Lancaster joined parking authority board members and other guests for a tour of the construction site, hosted by Project Manager Paul Bahn of Hammel Associates Architects, and Andy Gilburg, vice president of higher education and commercial/specialty markets at Benchmark Construction, the general contractor. 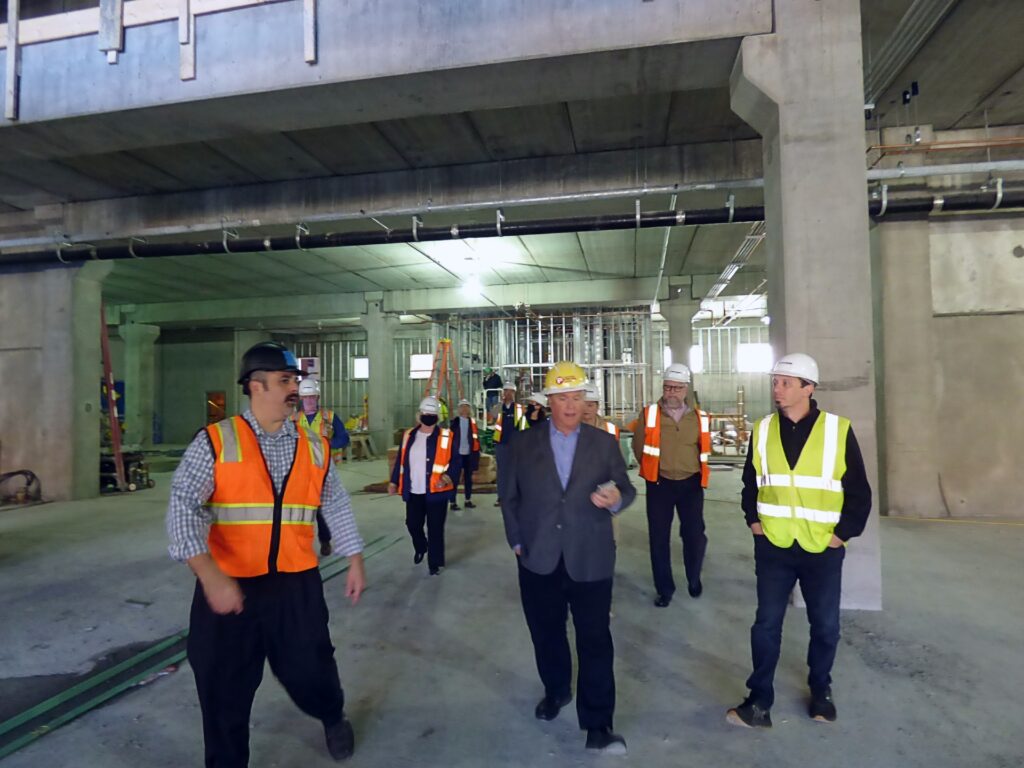 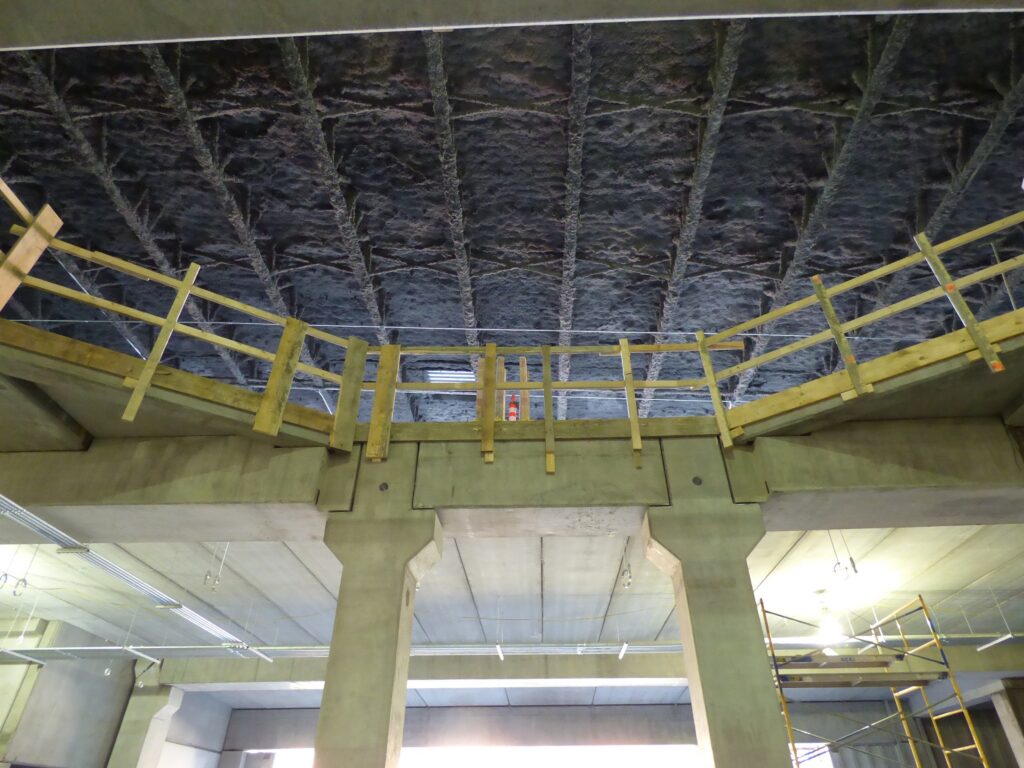 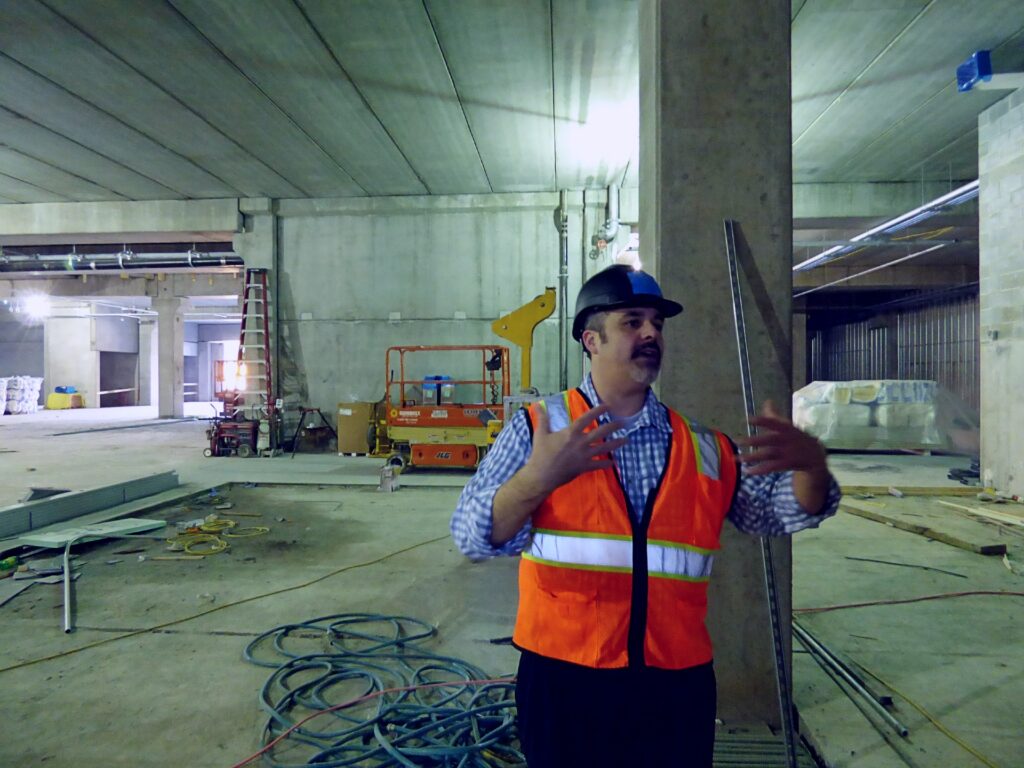 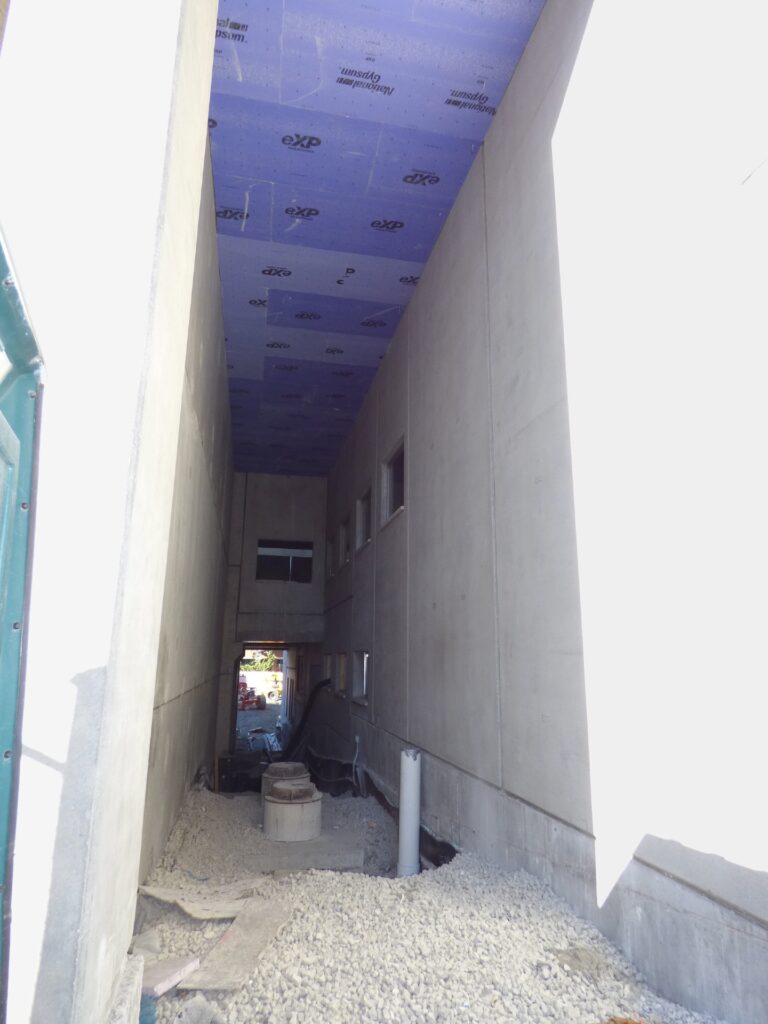 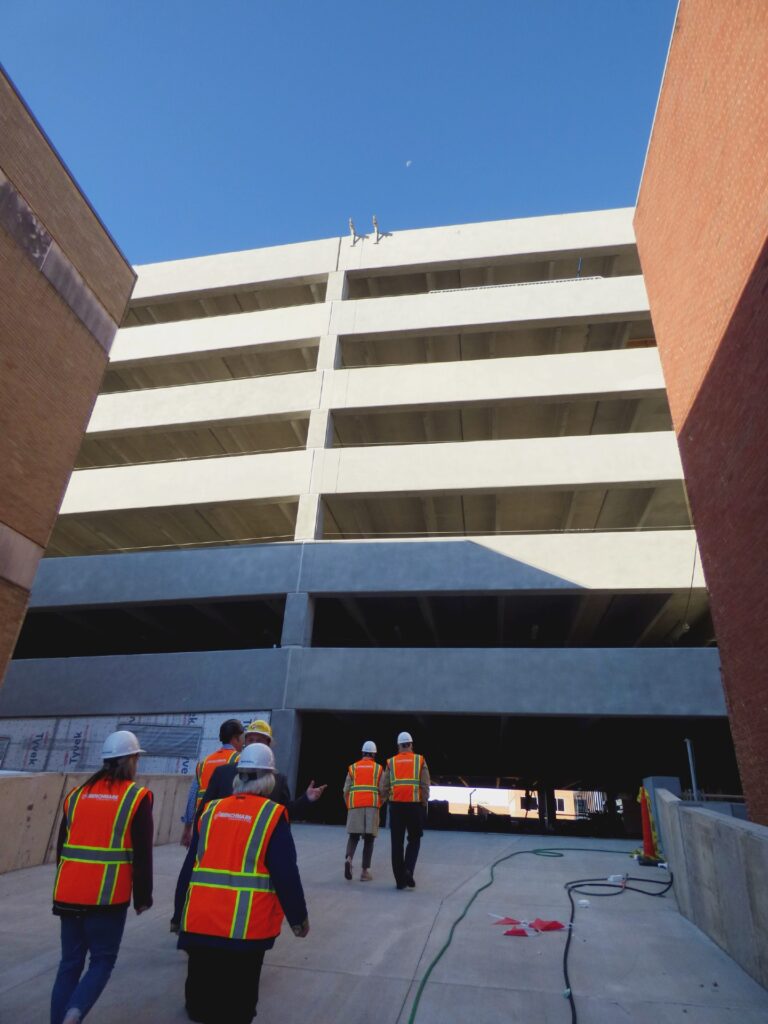 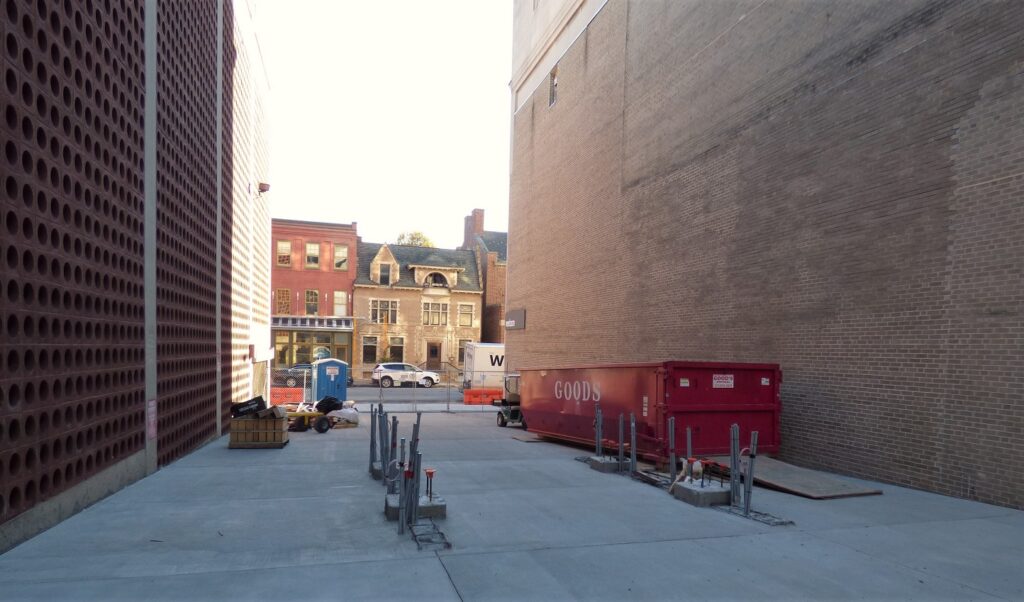 The Christian Street Garage entrance ramp. Note the three lanes: The one at left will be an entrance ramp, the one at right for exiting, and the middle will flex based on time of day and traffic flow. (Photo: Tim Stuhldreher) 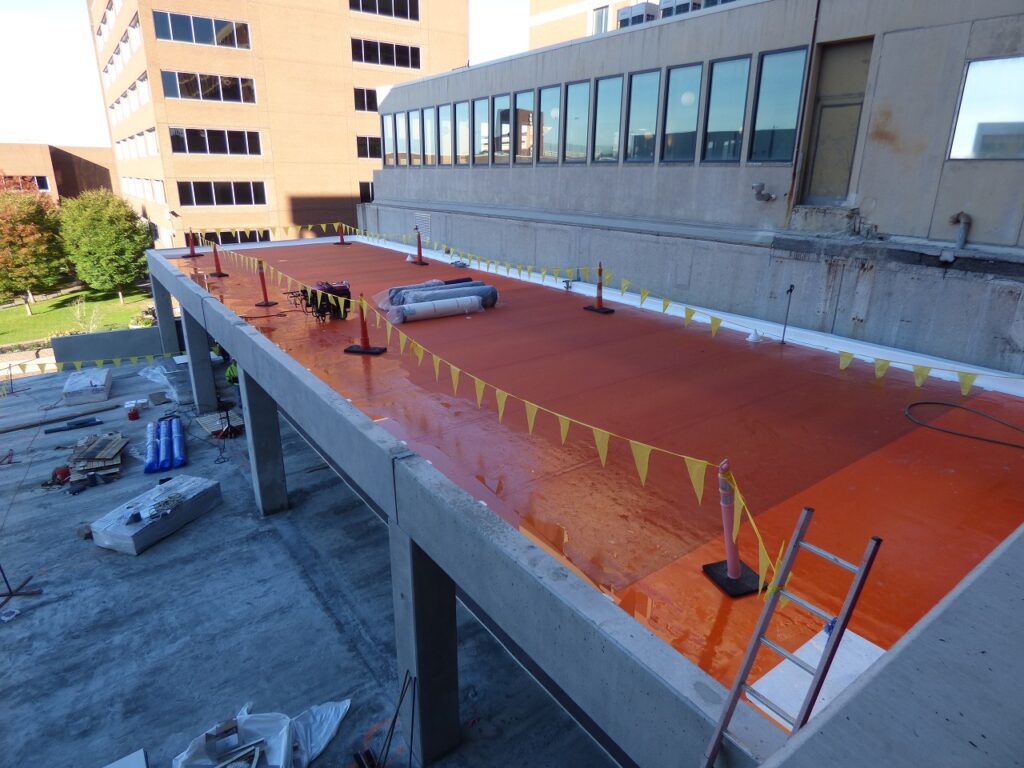 The Holiday Inn Lancaster's terrace facing Ewell Plaza will have a green roof. The orange material is a protective waterproof membrane. Below the terrace is retail space. (Photo: Tim Stuhldreher) 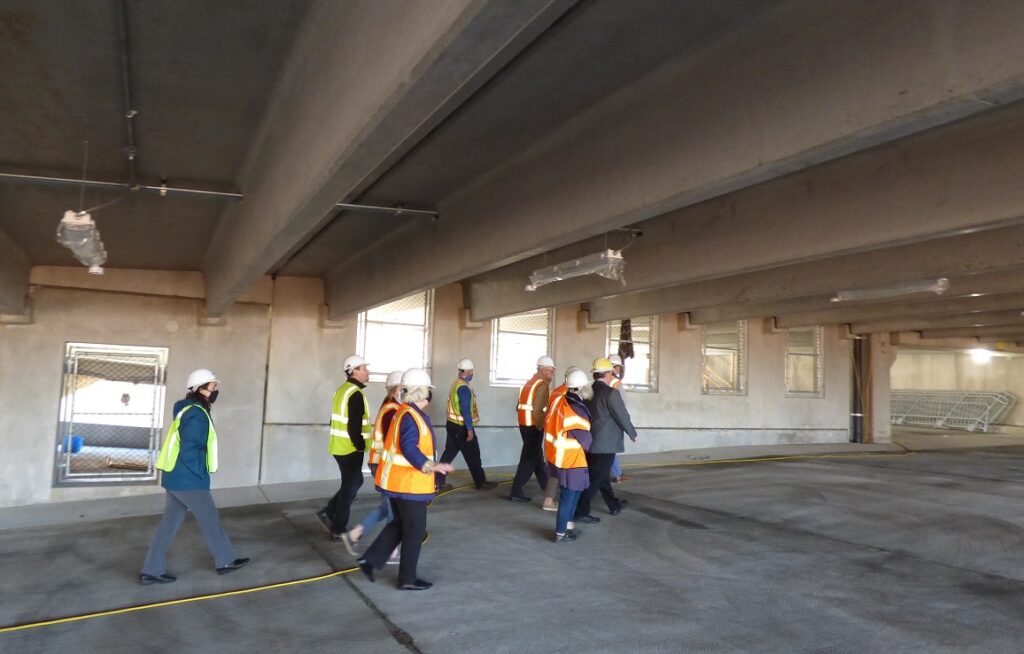 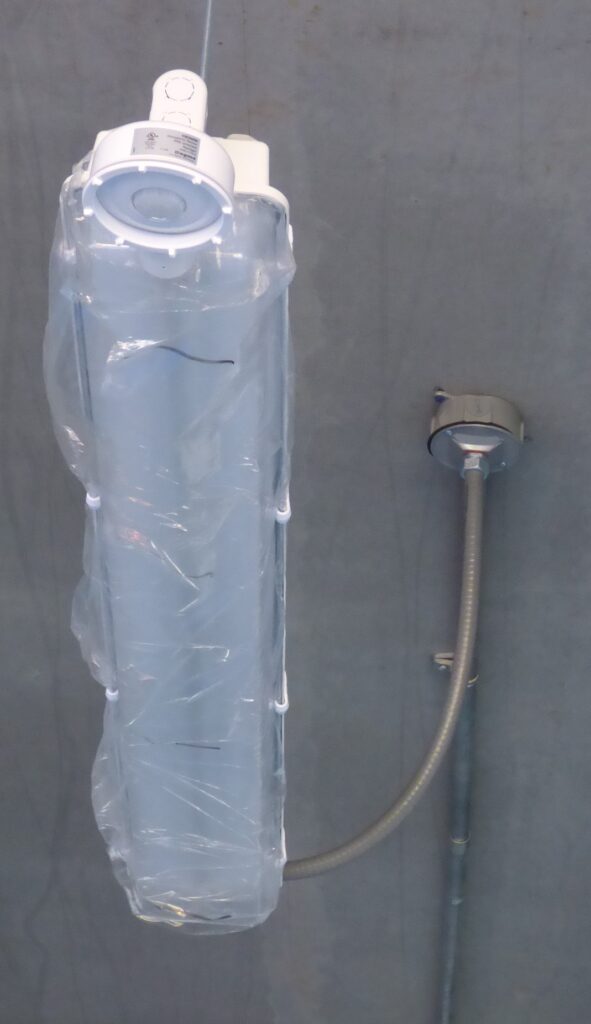 The garage has high-efficiency LED lighting. The circular device at top is a motion sensor, so the light can remain off until it is needed. (Photo: Tim Stuhldreher) 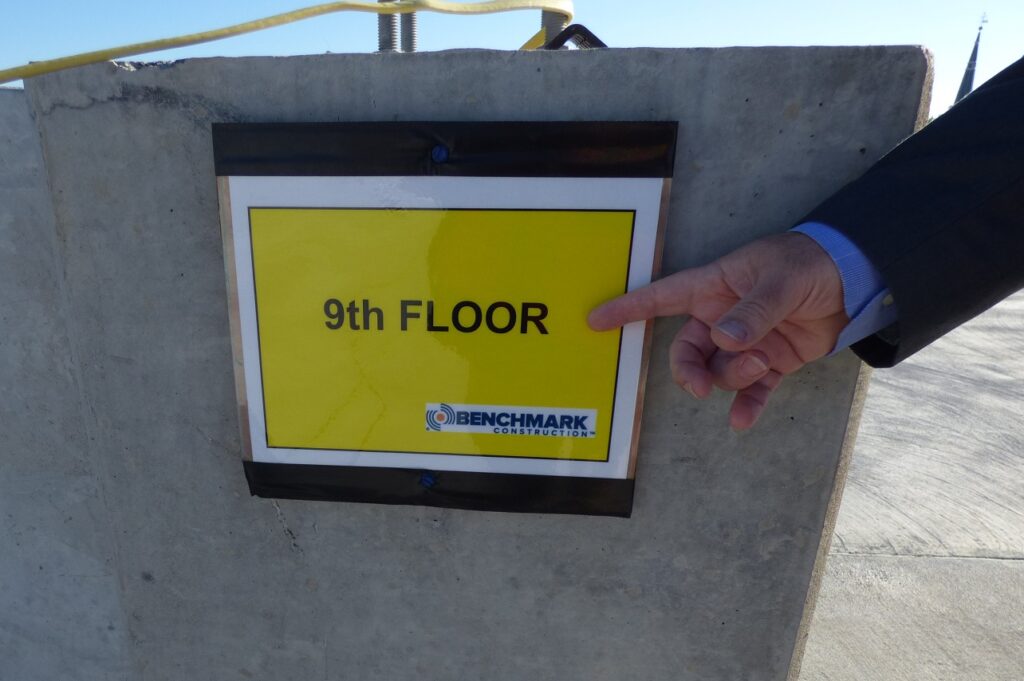 A temporary sign on the topmost deck of the parking garage. The number refers to the total levels in the library-garage project. (Photo: Tim Stuhldreher) 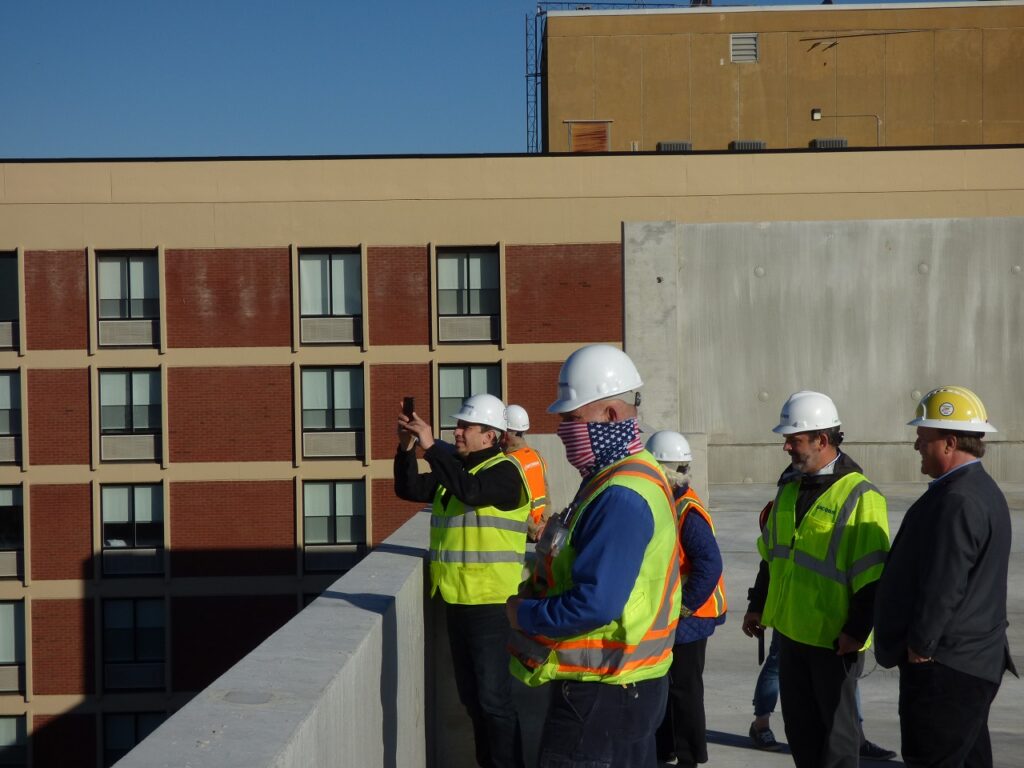 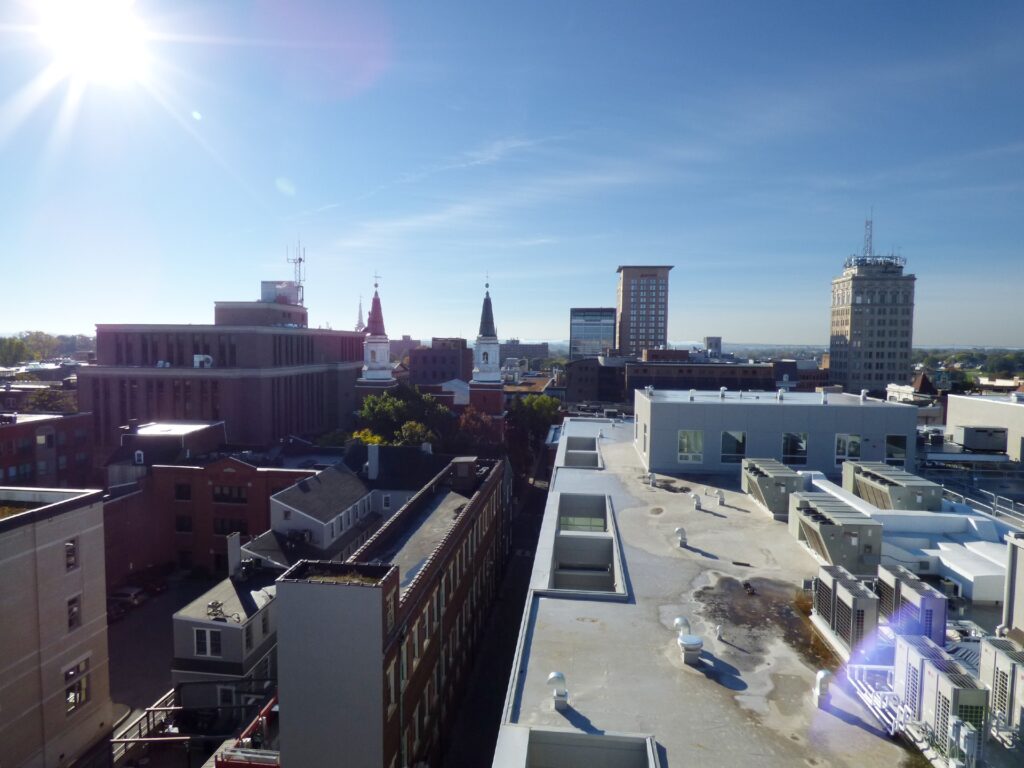 The garage and library project is the penultimate step in the redevelopment of Ewell Plaza, following the renovation of the Holiday Inn Lancaster building to the north and the conversion of the former Bulova Building to the south into the mixed-use 101NQ complex. The final element will be the city's rebuilding of the plaza itself.

The library will lease its two floors, totaling about 40,000 square feet, from the authority at no cost. The arrangement gives the nonprofit a new, up-to-date facility in place of its aging building at 125 N. Duke St., which is plagued by leaks, mold and other costly maintenance issues.

The library is looking at a preliminary budget of $8 million to build out the interior and equip the new space, officials told City Council last month. It is seeking at least $3.25 million in state grants, and is undertaking a local capital campaign. The hope is to open in early 2023.

As for the garage, Cohen said it will open in early 2022. Its 300-plus spaces will serve 101NQ (a connecting doorway will provide direct access between the two buildings), the hotel, library and other nearby properties.

Also part of the work is a one-story shell for retail. It abuts the hotel, with its roof serving as a second-floor terrace. 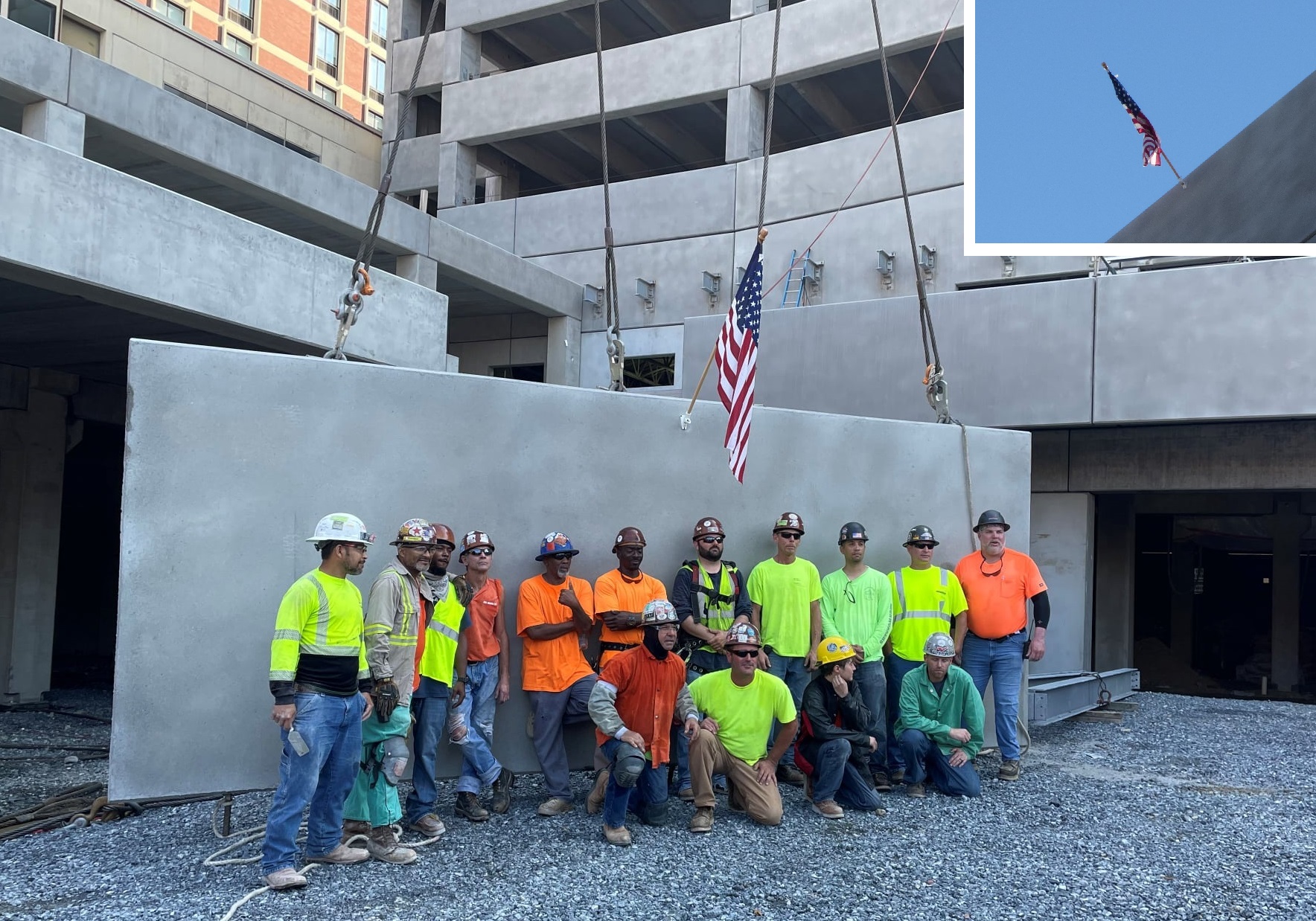 Construction workers pose with the final piece of precast concrete before it is hoisted into place at the Christian Street Garage on Aug. 24, 2021. Inset shows the flag flying atop the garage's southwest stair tower. (Source: Lancaster Parking Authority | OUL)

During the tour of the project site, Cohen, Bahn and Gilburg explained the many challenges involved. Among them: Finding a route through Lancaster's narrow streets to deliver those massive precast concrete slabs, which were staged near the Amtrak station on the city's north side.

The Christian Street Garage had to be carefully designed to fit within its tight footprint. The height of each level was carefully calibrated to keep the overall height within bounds.

Early on, there had been talk about connecting to the Duke Street Garage next door. However, that would have been "incredibly cost-prohibitive," Cohen said: "It just wasn't feasible."

He said the authority initially had proposed locating the library above the garage. Siting it at ground level is better for the library's visibility and accessibility, but necessitated building a garage entrance ramp from North Duke Street to what was now the complex's third floor.

Integrating the two uses also required creating enough separation between them to insulate the library from noise and vibration and meet fire code requirements.

Hopes of opening the garage as early as 2020 were derailed by the Covid-19 pandemic. The pandemic was likely also a factor in pushing construction costs higher.

The total estimated project cost is around $34 million, up from earlier estimates of around $29 million. Revenue for the parking authority's debt service is to come from the City Revitalization & Improvement Zone, or CRIZ, a program that returns locally generated state business tax revenue to the city to underwrite development. In this instance, the revenue will come primarily from 101NQ commercial tenants.

CRIZ funds contributed toward the hotel and 101NQ projects as well.

The garage's Ewell Plaza facade is to be a piece of public art designed by R&R Studios. Local residents voted this fall on three candidate designs. The final decision remains pending.