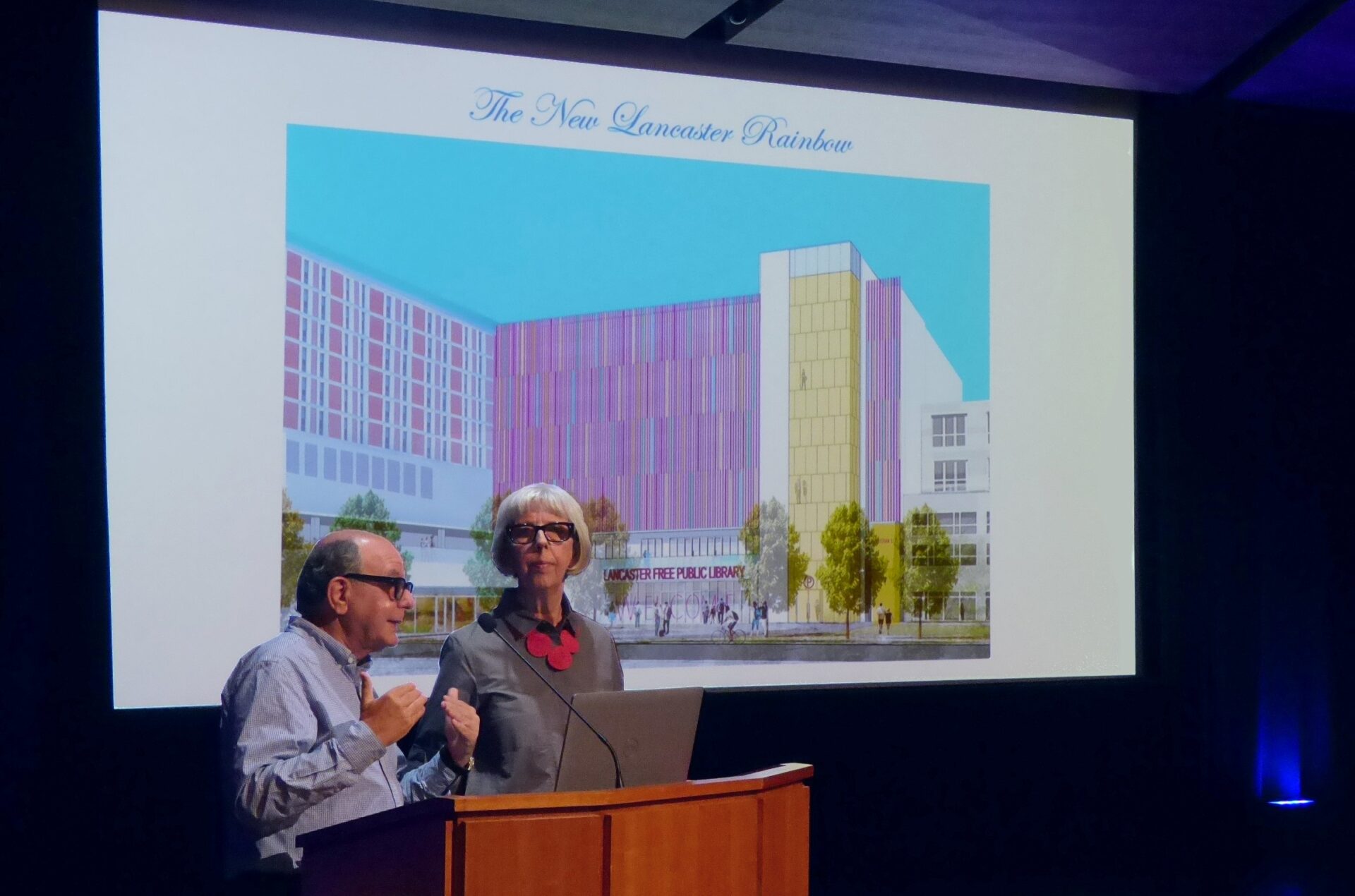 Saying their goal is a piece that embodies the vibrant, welcoming spirit of Lancaster and harmonizes with the surrounding streetscape, artists Roberto Behar and Rosario Marquardt on Friday unveiled their three proposed designs for a large public art installation overlooking Ewell Plaza.

They are dubbed, respectively, "The New Lancaster Quilt," "I Love Lancaster," and "The New Lancaster Rainbow." One of them is to be chosen in October to be assembled out of colored aluminum tubing and affixed to the facade of the library and garage complex now under construction on the plaza's east side. 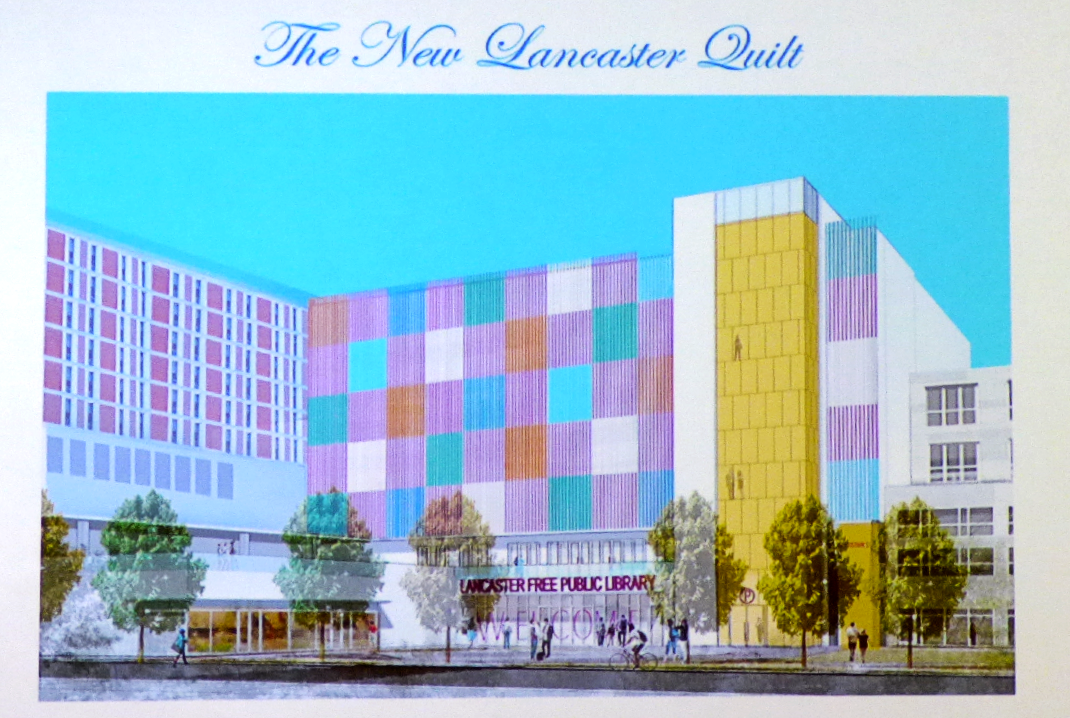 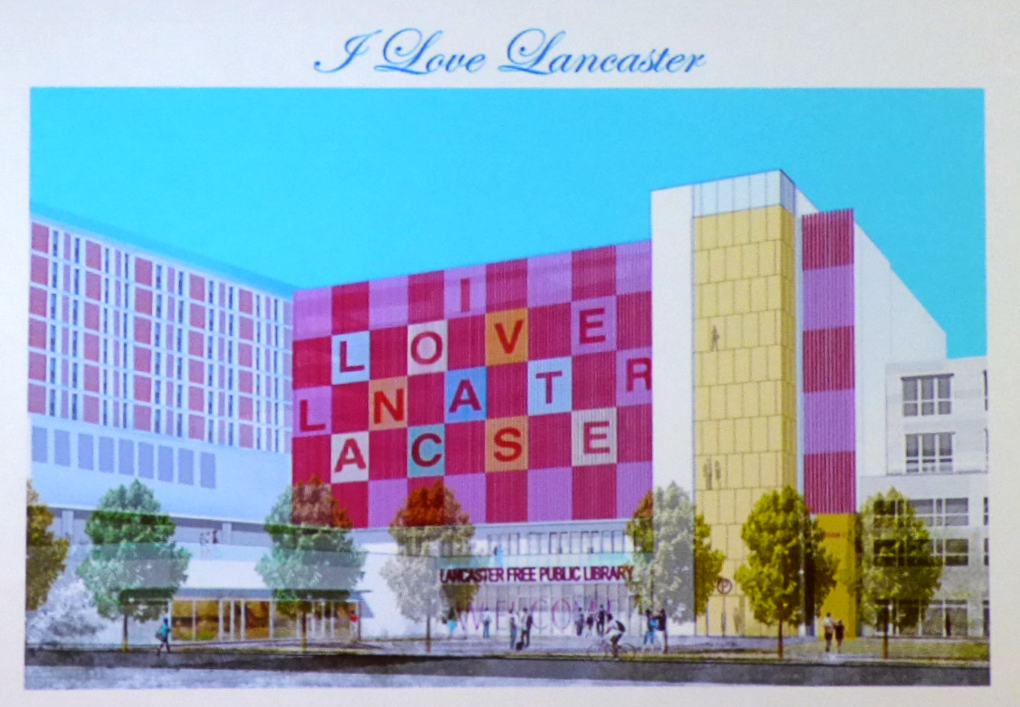 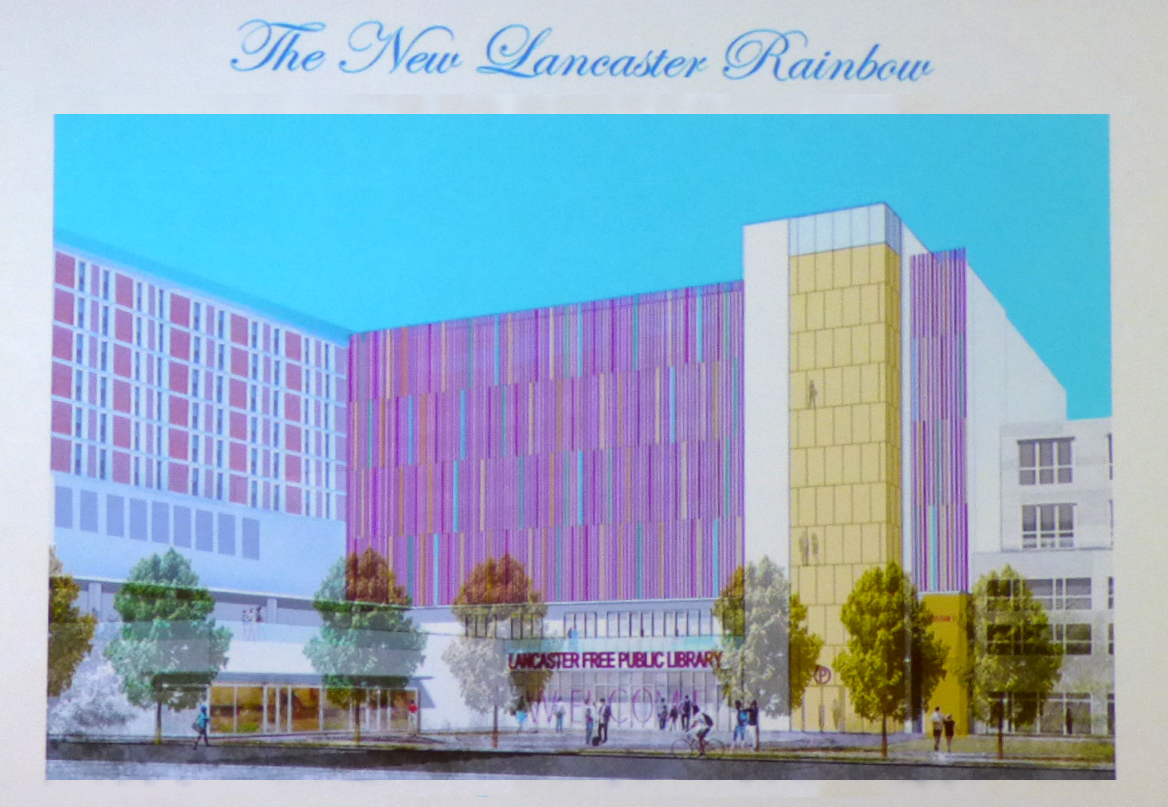 "The colors are built upon the colors we see in the city," with the red of Lancaster's brick row homes predominating, Behar told an audience of several dozen gathered at The Ware Center for the presentation.

"It will look like the character of the city," Behar said.

The tubes would be square in cross-section, with colors other than red painted only on the west-facing side, so the colors will narrow and widen as a viewer traverses the plaza. As Behar put it, "the piece performs for you." 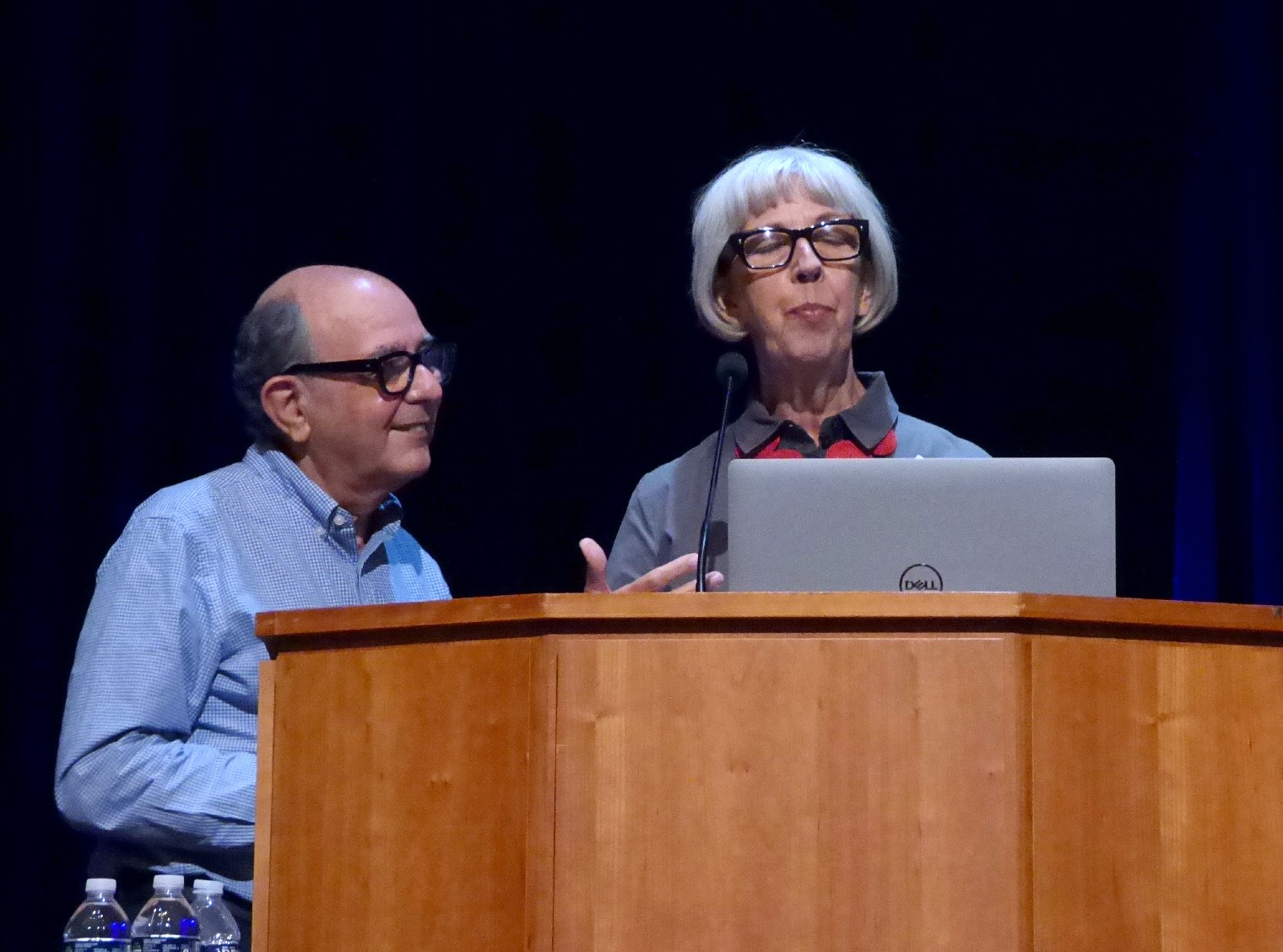 Two years in the making

Behar and Marquardt are the principals of Miami-based R&R Studios. In 2019, a committee selected R&R to develop public art for the facade on behalf of the Lancaster Parking Authority, the project developer. The city's Public Art Advisory Board facilitated the process. 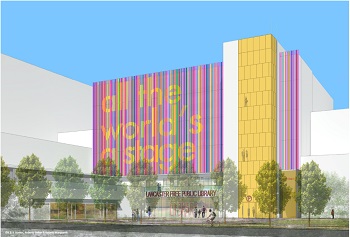 R&R's initial conceptual design, like the three current proposals, featured brightly colored vertical aluminum tubing. The 2019 concept featured a large billboard-style message; it was suggested at the time that the wording could be chosen through a public process.

The project has been controversial, with opponents contending that R&R's candy-stripe, pop-art aesthetic is a poor fit for Lancaster, and that local artists should have been considered. The city Historical Commission recommended against approving the project, but City Council voted to allow it to move forward, on condition that R&R commit to an "public engagement" process, culminating in Friday's forum and the requirement that two to three alternative designs be offered.

Members of the Lancaster community are invited to vote on the city's Engage Lancaster platform for the Ewell Plaza public art option they prefer.

As of Sunday afternoon, "The New  Lancaster Rainbow" was clearly in the lead, with 13 votes. The other two had none.

The vote results will be considered when the Lancaster Parking Authority makes its choice, which it is scheduled to do in October. Construction of the library and garage is to wrap up in November.

"I loved what they said," artist and entrepreneur April Koppenhaver said after Behar's and Marquardt's presentation. However, she added, "For me, good art doesn't need an explanation."

Koppenhaver, founder and owner of Mulberry Art Studios, was part of a coalition of Lancaster residents who unsuccessfully petitioned county court to overturn City Council's decision. She said she doesn't want Lancaster to squander the huge opportunity that Ewell Plaza represents.

Despite Behar's and Marquadt's talk about reflecting Lancaster's uniqueness, Koppenhaver said, "we still keep coming back to vertical tubes. That's where my disappointment lies."

Mimi Shapiro, an artist and member of Lancaster's Historical Architectural Review Board and Shade Tree Commission, said she liked "The New Lancaster Rainbow" the best out of R&R's three designs. The colors, and the way they change as viewers move, effectively convey the idea of Lancaster as a dynamic "rainbow city," she said.

Behar and Marquardt said they, too, prefer the "Rainbow" option. It's delicate yet strong, Behar said, and is the most open to multiple interpretations. He predicted it would become an "instant landmark."

Unlike the 2019 version, all three current options visually divide the facade into several tiers. That helps reduce the scale, Behar said.

The duo effused over Lancaster's historical character, its open, welcoming attitude, and above all, over the level of civic pride here. To the extent that Lancastrians' pride took the form of criticizing R&R, that inspired the duo to work harder, Marquardt said.

They stressed the constraints they faced: Technical and engineering constraints, the need to harmonize with the neighboring buildings and the public plaza, and a fixed budget of $600,000 -- which, although it is the most ever spent here on public art, still limits R&R's options.

Aluminum tubing is durable, lightweight, simple to install, and allows for sufficient air to circulate in the garage, they said. 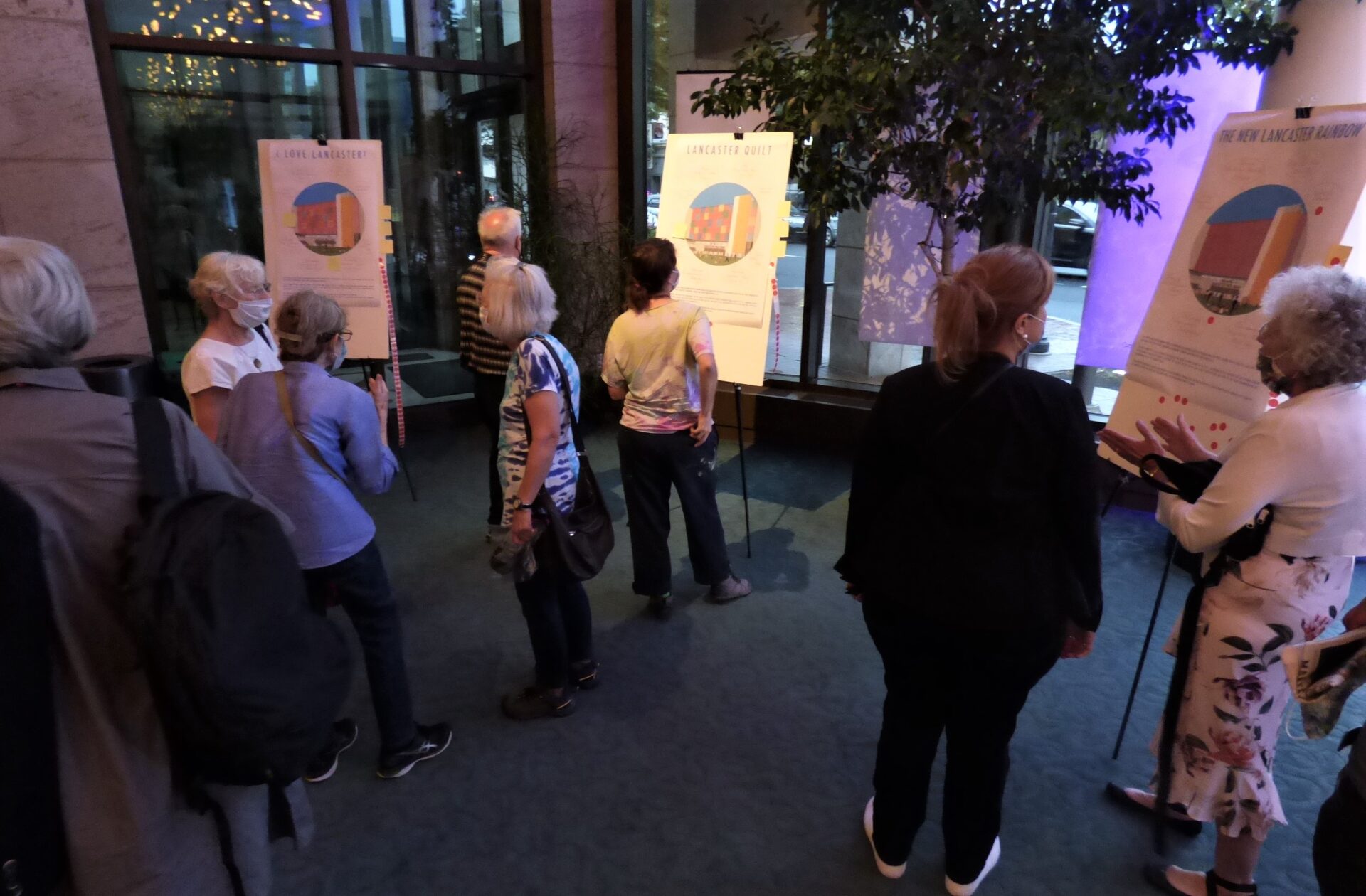