A conceptual drawing shows an example prison footprint on property at 100 Greenwood Ave., Lancaster Township. The drawing was developed to show there is enough acreage for the proposed facility; the actual footprint, if built, could differ dramatically from what is depicted. (Source: Rettew | Lancaster County) 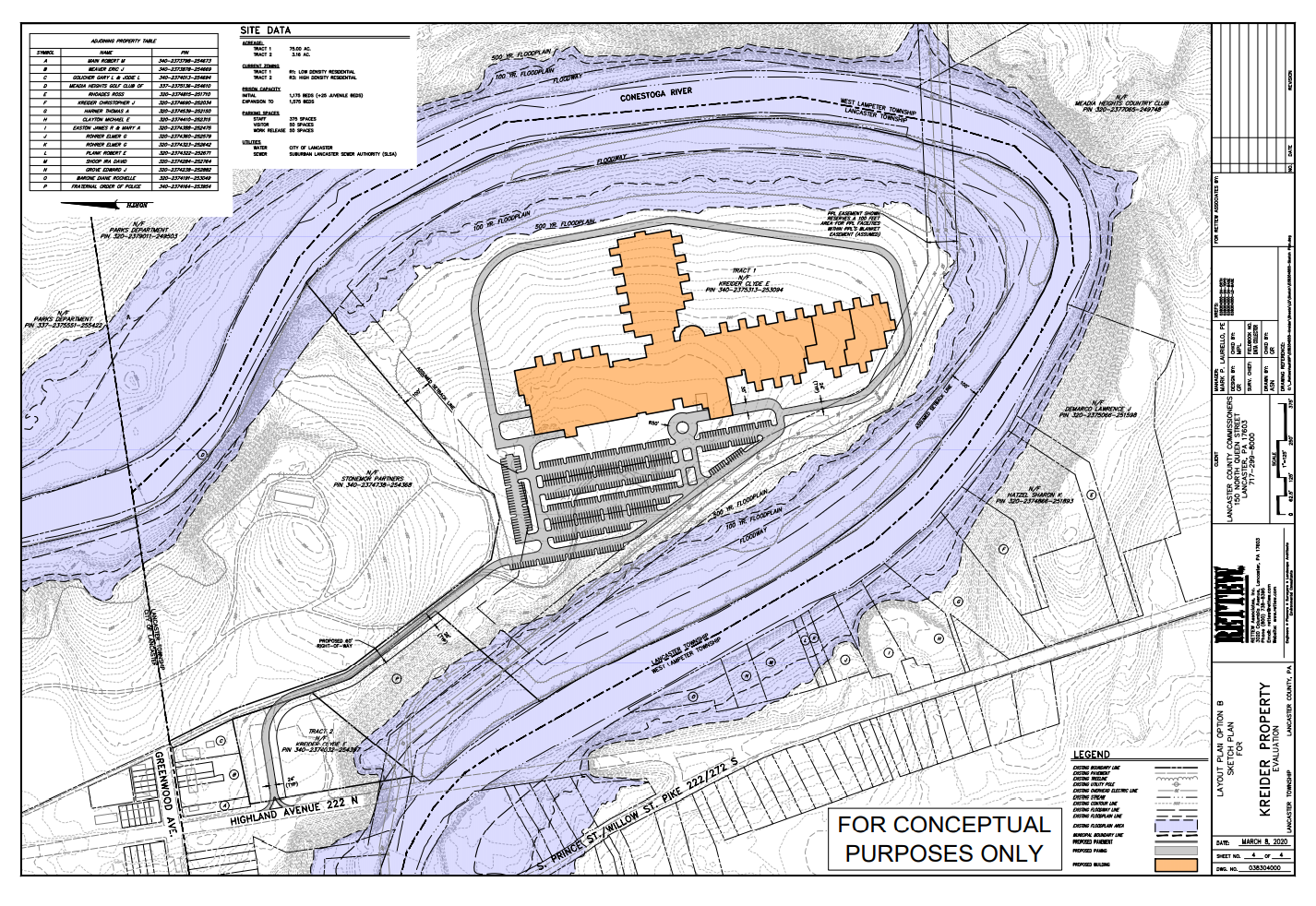 A conceptual drawing shows an example prison footprint on property at 100 Greenwood Ave., Lancaster Township. The drawing was developed to show there is enough acreage for the proposed facility; the actual footprint, if built, could differ dramatically from what is depicted. (Source: Rettew | Lancaster County)

The Lancaster County Prison Board on Thursday unanimously recommended that the county commissioners move ahead on acquiring 75 acres of land in Lancaster Township for a new prison.

The board's resolution sets the stage for the commissioners to discuss the matter further at a work session on Tuesday. They are to vote on the purchase on Wednesday.

All three commissioners have expressed strong support for the transaction, saying a new prison is badly needed and the proposed property is ideal.

"This site meets all the criteria the best," said Commissioner Ray D'Agostino, who led the site selection committee.

The property in question, 100 Greenwood Ave., is a peninsula bounded on three sides by the Conestoga River. It sits just south of Lancaster city next to Lancaster County Central Park. It is owned by Clyde and Shirley Kreider, according to county records.

The county would pay $3 million for the land, a price that meets the "fair market value" standard, based on appraisals of $2.4 million and $3.36 million.

The prison built there is tentatively sized at around 1,250 beds. There has been no estimate of total cost: Previous ballpark estimates have been at least $100 million.

The Kreiders' willingness to sell at a fair price is a strong point in the site's favor, Commissioner Josh Parsons said.

"I hate eminent domain," he said.

The proposal was first unveiled on March 5. On Wednesday, Warden Cheryl Steberger reiterated the case for a new prison: The existing prison at 625 E. King St. in Lancaster, which date to 1851 is obsolete.

Constant maintenance is needed to keep its aging infrastructure working. It lacks air conditioning, and though it has enough space to house its current inmate population, its ancillary spaces such as the kitchen, offices and so on are woefully inadequate.

Building on the current site wouldn't make sense: It's too small, and a prison is a poor fit with the dense urban neighborhood that has grown up around it.

County engineer Mark Lauriello of Rettew said the location will have minimal impact on nearby residential tracts. Still, several neighbors asked the commissioners to think twice before committing to the purchase.

Austin Beiler said he and his wife would not have purchased their house had they known a prison could be built nearby. Meade and Michelle Stoner said the Kreiders' farmland has been a refuge for them, and said they hope the commissioners follow through on plans to make the property surrounding the prison itself a nature trail with public access.

Commissioner Josh Parsons promised the county would do its best to build a facility that looks attractive and fits in with its surroundings, even if it means spending a little more and going the extra mile on the landscaping. These days, he said, prisons are designed to resemble schools, and security improvements have almost eliminated the chance of escapes.

Architect Deborah Stuart questioned whether a prison was the "highest and best" use of the site, given the scarcity and appeal of waterfront properties. D'Agostino, however, said residential developers have looked at it, and concluded it would be too challenging.

The difficulties include rocky geology, the cost of extending water and sewer lines and the need to limit development to the portion of the property outside the flood plain, Lauriello told One United Lancaster. For the county, though, the 45 buildable acres are plenty, and the opportunity to preserve the remainder as a riparian buffer is an added positive.

Commissioner Craig Lehman acknowledged that he was in office when the site was under consideration for a prison previously, more than a decade ago. The current site selection process, however, started from scratch, and he said he had no influence on the process that led to its being picked, a statement D'Agostino corroborated.

A decade ago, officials were considering building a facility with 2,000 beds or more. That the discussion is now geared toward a 1,200-bed prison is testimony to the county's commitment to reducing head count and finding alternatives to incarceration whenever possible, he and President Judge Dennis Reinaker said.

Local advocates for prison reform praised the county's plans and said they hope things move quickly.
The existing prison is an embarrassment, said Kent Kroehler, of Have a Heart for Persons in the Criminal Justice System. He said he hopes to be able to show off the new prison with pride, as a model of enlightened rehabilitation policy.

"Keep a sense of urgency," he said.