For the past few weekends, peer counselors have been standing by in Lancaster County, ready to assist local police departments at incidents involving mental health crises.

The first weekend alone, counselors assisted on seven incidents, including one involving a suicidal individuals on a bridge. Six resulted in referrals to appropriate mental health services.

Gateways will need funding if it's going to be sustainable in the long term and offer support seven days a week, Dreisbach and McCoy said. But they said they are confident it can reduce recidivism and improve community health.

Interim city police Chief John Bey concurred, saying, "This is a service that our community needs."

Dreisbach and McCoy are, respectively, the CEO and the executive vice president of Blue Prints for Addiction Recovery, which offers various addiction treatment services.

A couple of years ago, they launched Second Chance PA, a diversion program that works with police departments. Officers in participating departments can choose not to charge minor drug offenses provided offenders agree to go into treatment. Certified recovery specialists can be dispatched to assist officers on scene as needed.

In about a week, the pilot program, "Gateways," was set up. It launched during the third weekend of March, with counselors on call 24/7. 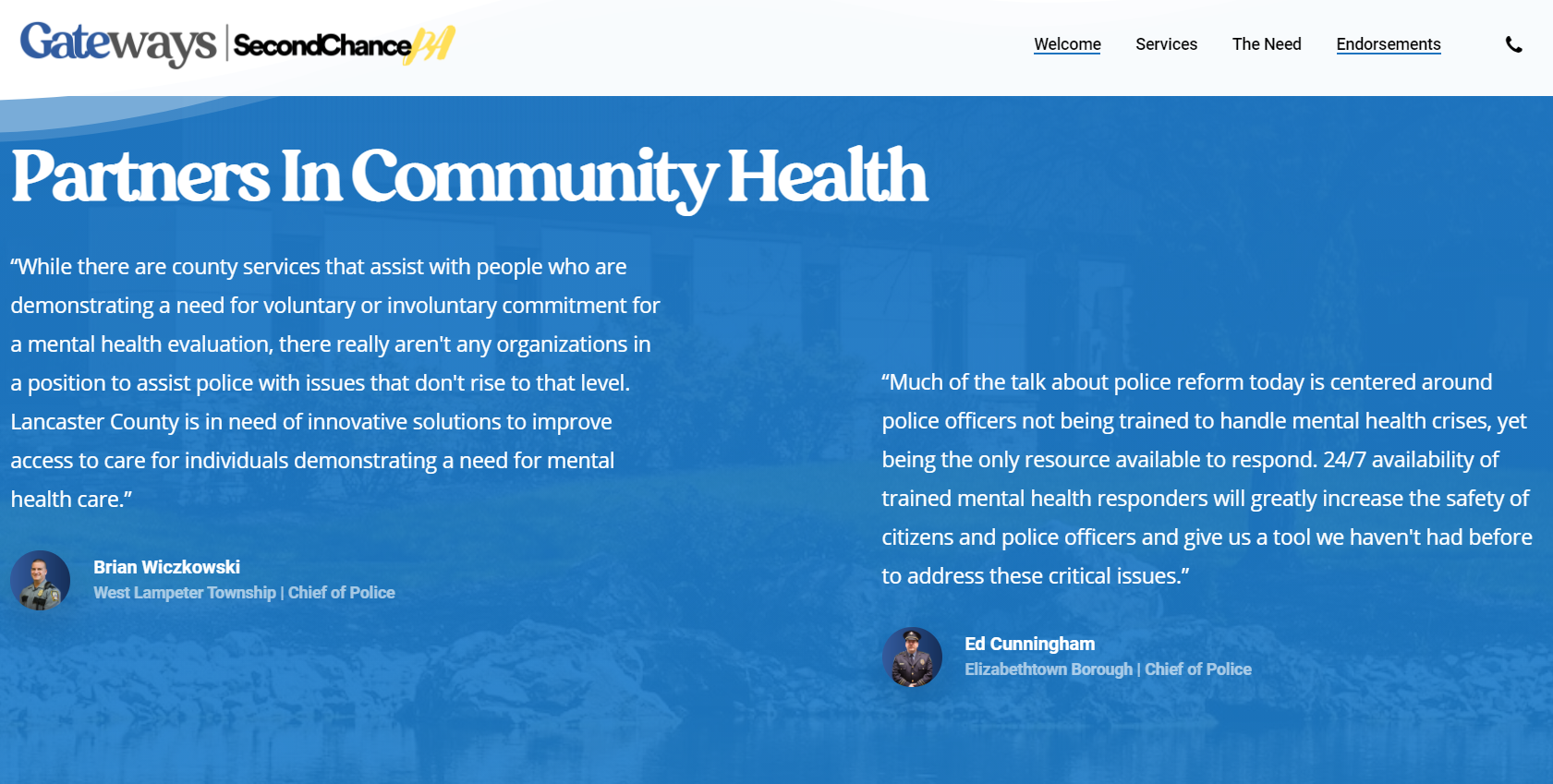 As Gateways approaches the one-month mark, the majority of Lancaster County's municipal police departments are on board.

Few areas have a service this responsive, McCoy said — one that reaches individuals in crisis within minutes and gets them into the appropriate program within minutes to hours.

Local community activists have pushed for such a service, saying that having police handle mental health incidents increases the risk of escalation and violence.

They point to incidents such as the death last September of Ricardo Munoz, 27, who had a history of schizophrenia and bipolar disorder. He was shot and killed by a police officer responding alone to a 911 call. Munoz retrieved a knife as the officer approached and charged out of his mother's house brandishing it.

Lancaster County's Behavioral Health & Developmental Services office has a Crisis Intervention service. However, it's not set up to provide rapid on-scene responses during non-business hours, Dreisbach and Sorace said.

Judith Erb, BHDS executive director, said Crisis Intervention has always been available 24/7 by phone, and has been able to respond on scene "depending on staffing availability" if requested by police.

BHDS and Gateways have been meeting to discuss Gateways' efforts and how best the two organizations can partner.

Erb said Gateways' use of peer specialists makes it "exciting and different ... [T]hese staff can relate to the identified individual on a personal level because of the responder’s own personal mental health or substance use experience."

Asked what Gateways would need to go fulltime, Dreisbach said it comes down to finances. At present, Second Chance PA is absorbing the cost, but that's not viable long term.

City Council President Ismail Smith-Wade-El said he thinks the necessary funding exists.
"We have to find a way to make this the norm for our entire community," he said.