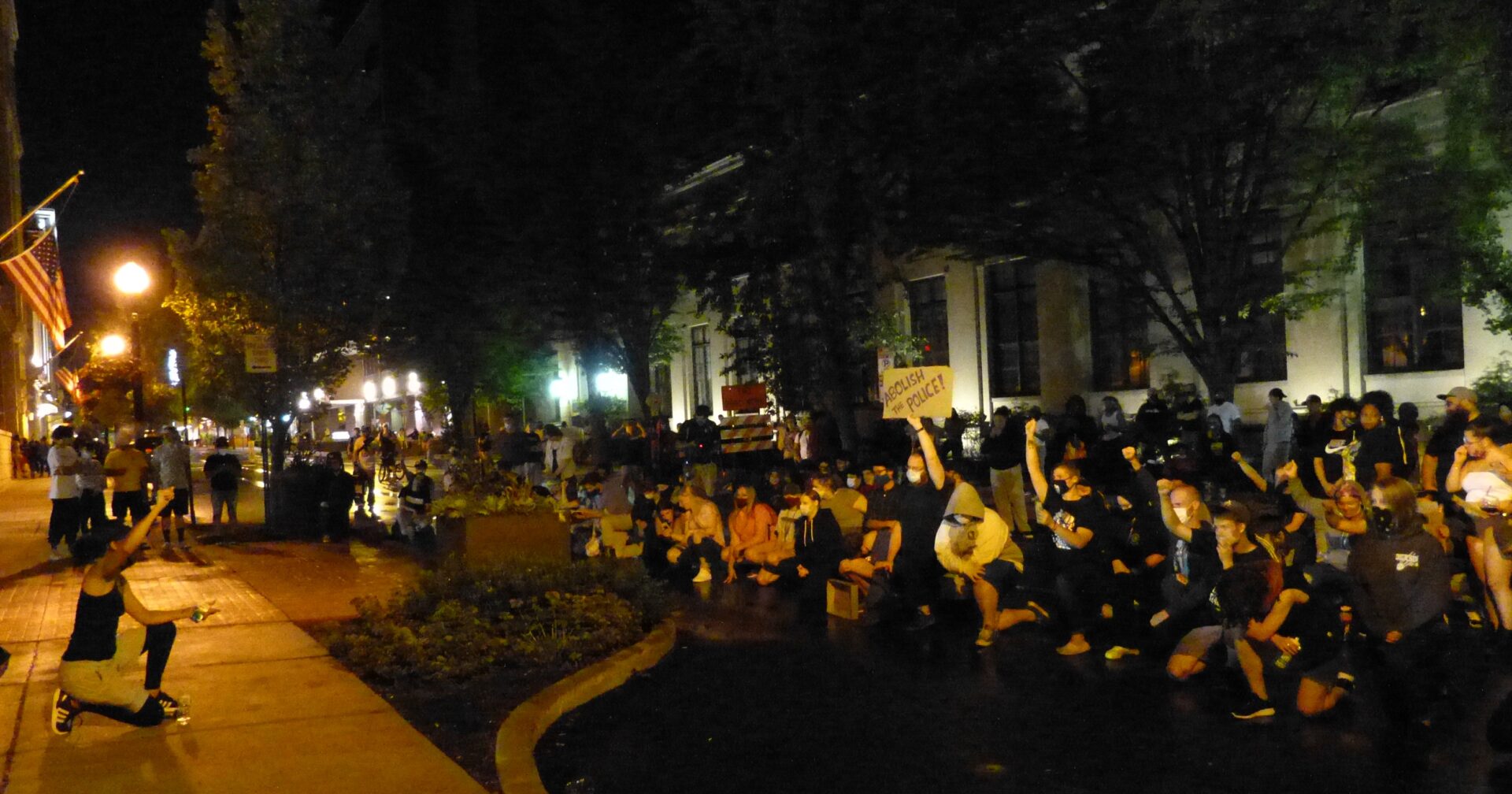 Police said they deployed "chemical agents" after a crowd gathered on the access ramp ignored multiple warnings to disperse. A county vehicle parked on the street was vandalized and bricks were thrown through windows at the police station and the post office across the street.

LNP journalist Carter Walker reported multiple arrests were made. At least twice, protesters built a barricade on the street.

The statement says an initial review of of body camera footage, which the Lancaster City Police Department posted online, shows Munoz "immediately emerges from inside and runs toward the officer, brandishing a knife above his head, in clear view, in a threatening manner."

The investigation is ongoing, the statement said; when it is completed, District Attorney Heather Adams will rule on the use of force. 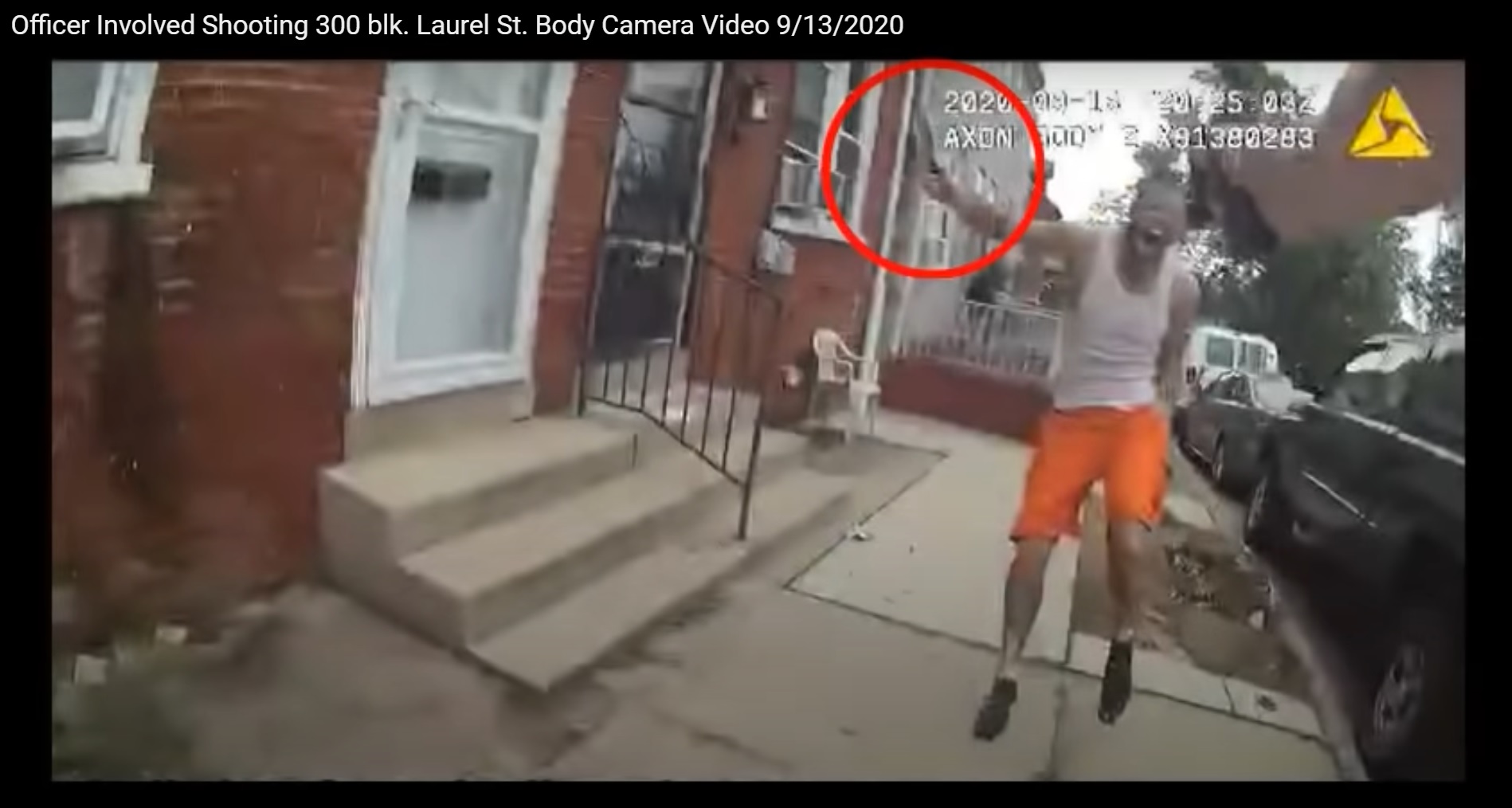 Ricardo Munoz is seen with a knife in this still image taken from bodycam video posted by the Lancaster City Police on Sunday, Sept. 13, 2020.

Officials have not named the police officer, who was placed on leave. Police said he was the only officer on scene when the shooting took place; backup arrived shortly afterward. 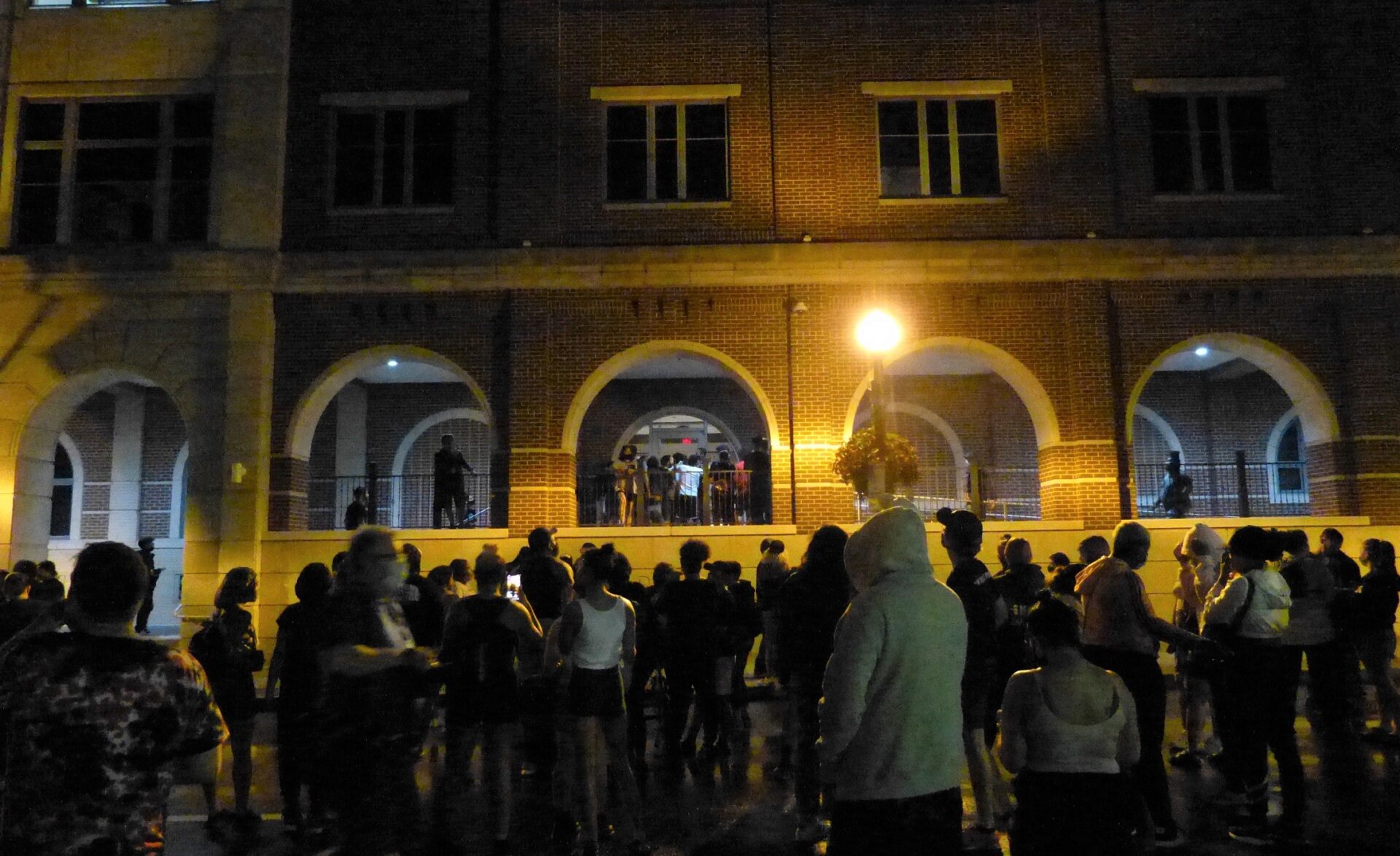 Meanwhile, a crowd of hundreds conducted an emotional protest Sunday night outside the city police station.

Portions of North Prince and West Chestnut streets were blocked to accommodate the demonstrators. Leaders with bullhorns led calls for justice. The mood was tense, and a couple of isolated scuffles broke out at various times.

Hundreds were still gathered at the station as of 11 p.m. Sunday.

In a statement posted on social media, Mayor Danene Sorace said, "This has been a heartbreaking day for our city. I grieve for the loss of life and know there are more questions to be answered as the investigation continues." 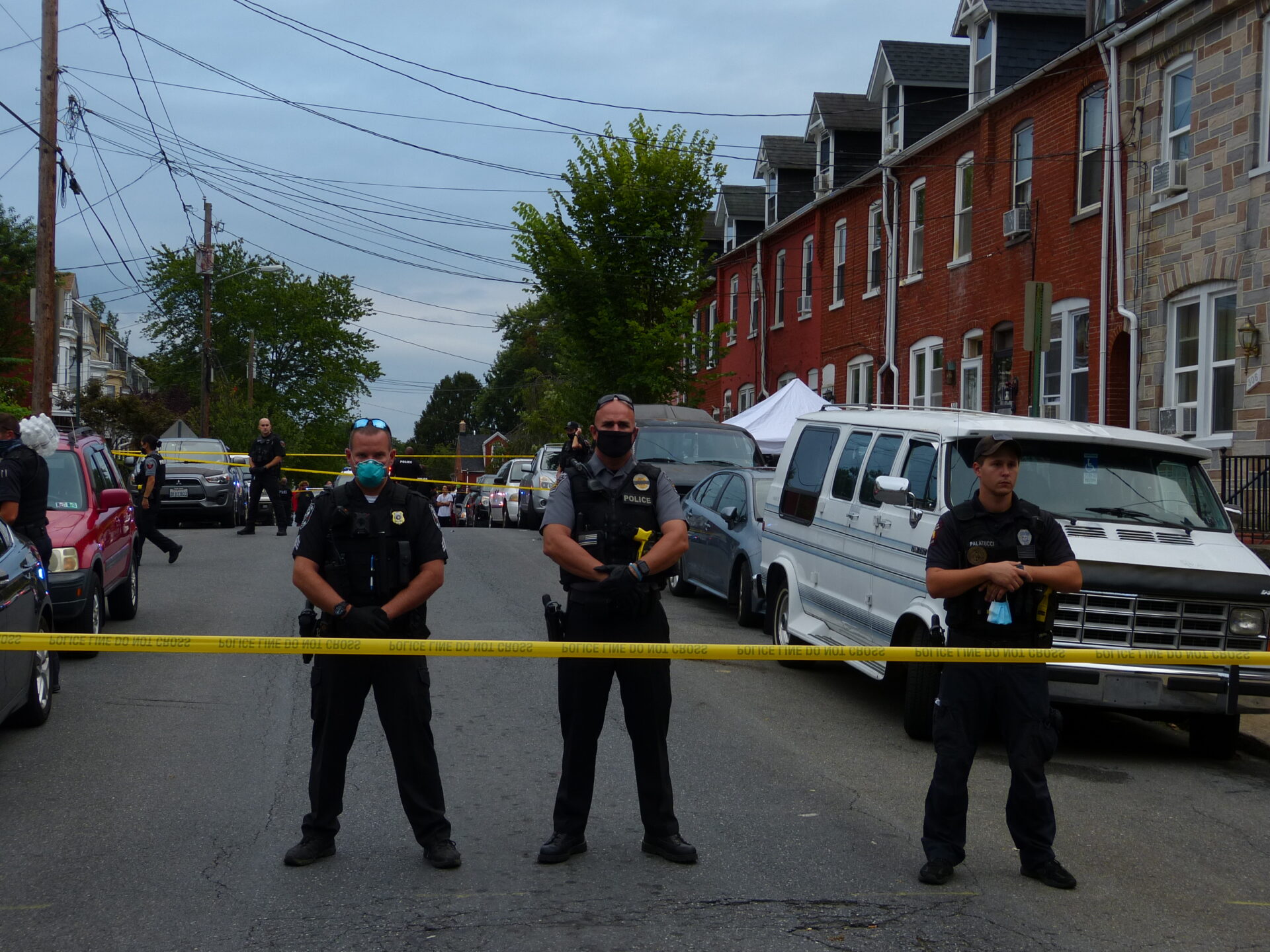 Lancaster city police shot and killed a man Sunday afternoon in the 300 block of Laurel Street, according to a police statement.

Police said they responded to the block around 4:15 p.m. for a call indicating a domestic disturbance in progress.

There was then an "Officer Involved Shooting," the statement said.

Police said an adult male died. He was "reportedly armed with a knife at the time of the shooting," the statement said.

The incident is under investigation by the county district attorney's office, which is standard procedure.

LNP newspaper reported that the shooting was captured on an officer's body camera.

Following the incident, a large crowd gathered outside the police tape on the southeast side of the block, and a smaller crowd on the other side at the intersection with Fremont Street. Many were clearly angry, denouncing the police response and saying officers should have de-escalated the situation or used non-lethal weapons.

Several protesters carried signs, and there were intermittent chants of, "No Justice, No Peace."  The crowd was continuing to build as of dusk Sunday.

More protesters gathered Sunday night outside the Lancaster City Police Station. The station was the scene of extended protests earlier this summer following the death of George Floyd in Minneapolis. 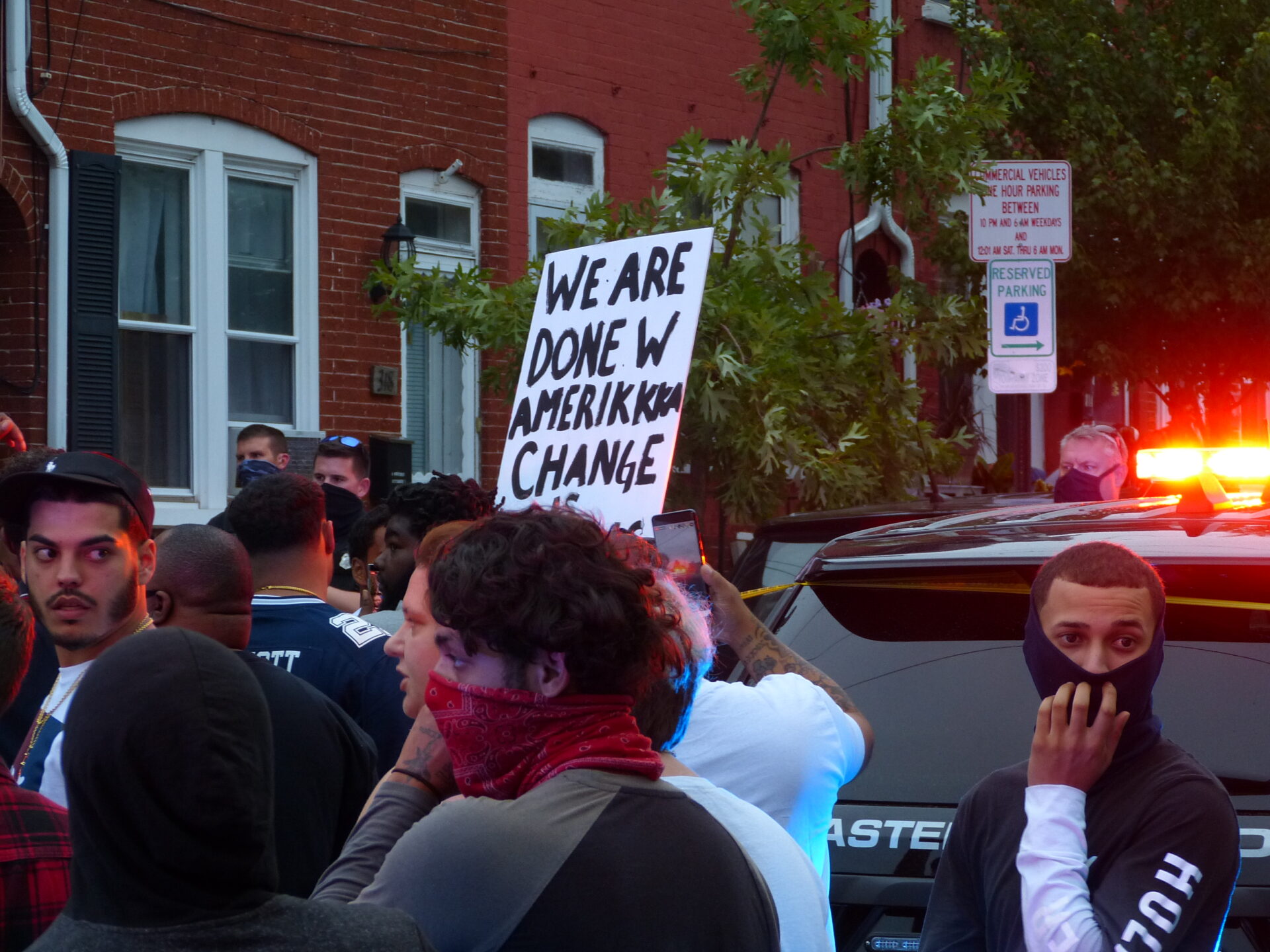 A crowd gathers following a fatal police officer-involved shooting in the 300 block of Laurel Street in Lancaster on Sunday, Sept. 13, 2020. (Photo: Tim Stuhldreher)