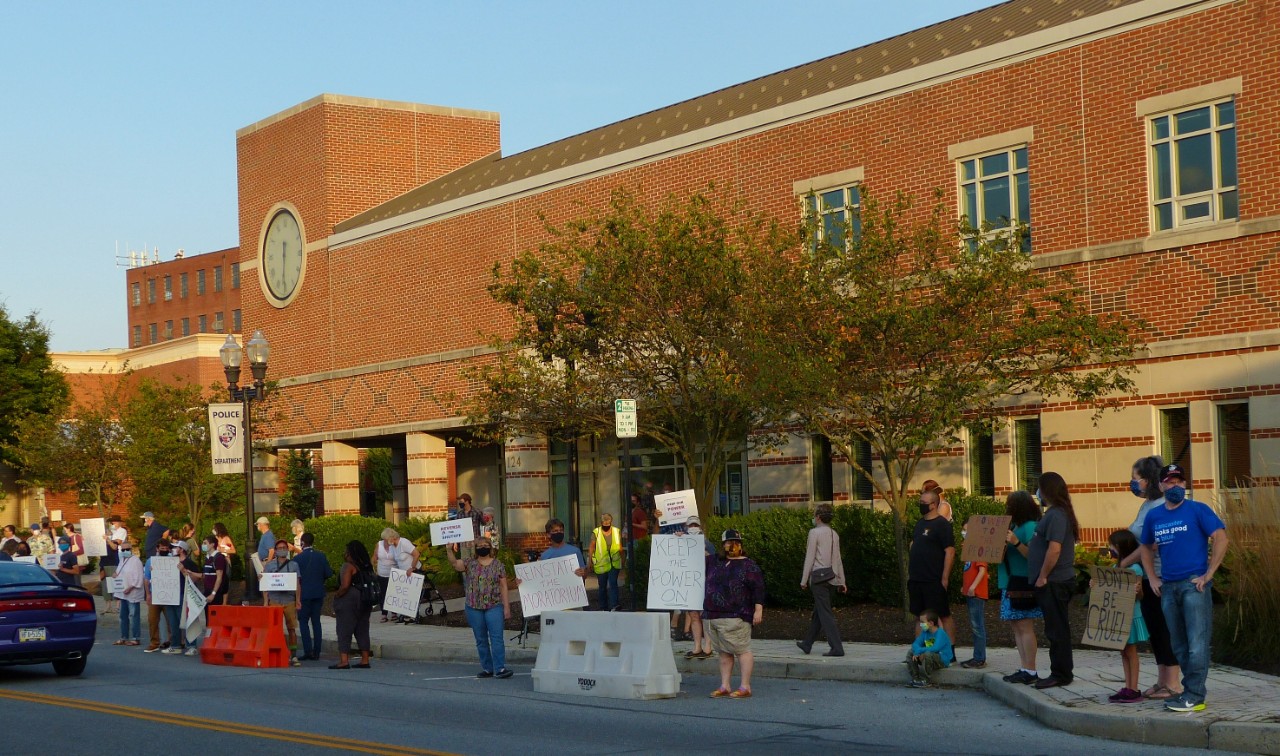 The enforcement effort will continue until the winter shutoff moratorium, and more shutoffs are scheduled for September, October and November, "weather permitting," she said.

She cautioned that customers with payment agreements must adhere to them to avoid disconnection.

"The customers that received partial assistance need to keep making payments.  If they don’t, they’re going to get even further behind," she said.

Ephrata Borough is conducting its third round of utility shutoffs today, two days after council members reaffirmed their decision to end a moratorium on disconnections.

As of this morning, one water customer and 14 electric customers were scheduled for shutoffs, borough office manager Tracy Roseberry said.

They follow just over 50 disconnections in two previous rounds of shutoffs in August. As of this week, 10 of those customers remained disconnected.

At a rally before Tuesday's borough meeting, organized by Northern End Stands Up, protesters called on council to reverse its "cruel" decision, saying families hard-hit by the coronavirus pandemic were being pushed further into crisis.

Council members, however, said the borough is making every effort to be fair, and that all but one of the disconnected customers had been delinquent for months before the pandemic hit.

Borough staff are working with customers on payment plans and directing them to assistance, Councilman Ricky Ressler said. He called the decision to end the moratorium "correct and reasonable."

Joy Ashley is executive director of Ephrata Area Social Services, which has been assisting borough residents at risk of shutoff due to nonpayment.

In the runup to the first two rounds of shutoffs, calls for help came in nonstop, she said, but this time, it's been much quieter.

"I don't know why it is so different," she said.

Ashley's organization is used to fielding calls in the spring, when the borough's winter shutoff moratorium ends. In a typical April, Ephrata Area might disburse $3,500, helping families make good on past-due amounts of $150 or so, she said.

But while families have been helped to avoid immediate crisis, Ashley said they still have balances due and ongoing payments to make. She's worried that leaves them potentially liable to a fresh cutoff notice in coming months.

In a statement this morning, Northern End Stands Up member Jim Sandoe expressed "disappointment" over Council's "callous indifference." Noting Ephrata's electric utility has millions of dollars in its fund balance, he called on the borough to extend the moratorium and work out long-term payment plans for customers.

The organization announced it is planning a second rally before Council's meeting on Monday, Sept. 14.

If you need help

The following organizations can provide access to assistance for those in need in and around Ephrata.