This image depicts a scene from the Ramayan epic, in which the god-king Rama is banished from the holy city of Ayodtha. 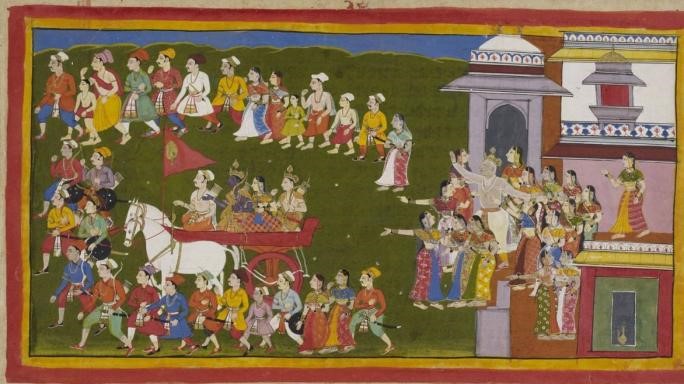 This image depicts a scene from the Ramayan epic, in which the god-king Rama is banished from the holy city of Ayodtha.

(Editor's Note: This article and its companion piece were researched and written by SuJan Upreti as part of the Refugee Youth Journalism Project.)

Many in the Bhutaese-Nepali community in Lancaster follow Hinduism, which traditionally does not approve of LGBTQ+ identities.

However, there is textual evidence that thousands of years ago, a third gender was worshiped as a demi-god.

At one point in the Ramayana, an ancient Indian epic religious poem, the god-king Rama is banished from the holy city of Ayodtha. The entire kingdom follows him into the forest.

The lord Rama tells them to return to the kingdom as he moves on. Fourteen years later, when he returns, he sees that the ”hijars” (transgender individuals) are still waiting for him where he left them.

Rama was pleased and honored them for their dedication, and he took them to his city and welcomed them.

I asked a Hindu pandit (priest) and a few members of the local LGBTQ community for their insights about the story and whether it changed their perception of trans identities.

I had the opportunity to talk by phone with Bhattarai, a 58-year-old pandit who lives in Pittsburgh. I asked him some questions regarding how thousands of years ago people worshiped transgender individuals as demi-gods, who were highly accepted in that era.

Transgender identity is represented in the Hindu texts, but over time its place in society has vanished. I asked Bhattarai, "Do you accept that transgender (individuals were) considered as demi-gods in the Hindu religion?"

He said, “I do accept that transgenders have always been part of Hindu religion, and as a matter of fact, they were high profile in most Hindu texts, especially in the Ramayana.”

In modern times, transgender individuals are often bullied, rejected by their families, and denied access to employment. I asked Bhattarai: Why don’t people value trans identity today, and can there be changes?

Times have changed, he said, and trans individuals have lost their status in Hindu religion. But, he said, we need to keep building as a society and discriminate less.

Transgender people have been discriminated against because there wasn’t support, but Bhattarai believes we are evolving now, especially young people, although the change is slow.

Punam Moktan, an 19 year old student at Millersville University, said, she thinks our society has changed (from its) old religious values. She said it’s hard to see people use religion as an excuse for hate.

"I think it's awesome that transgender (identity) was seen as something godly," she said.

SuJan Upreti, 18, came to the United States at the age of five. His family settled in Lancaster and he haslived here for the past 13 years. He graduated from McCaskey High School in June 2022 and is heading to Temple University to major in broadcast journalism.