Members of the Bhutanese-Nepali community meet with the East Hempfield Police Department to discuss police-community relations at the Lancaster Friends meeting house in November 2021. Officers were gifted traditional Nepali “topi” hats and shaws. The New Americans Leadership Academy is being developed to encourage this and other forms of self-advocacy among refugee communities. (Source: CWS Lancaster) 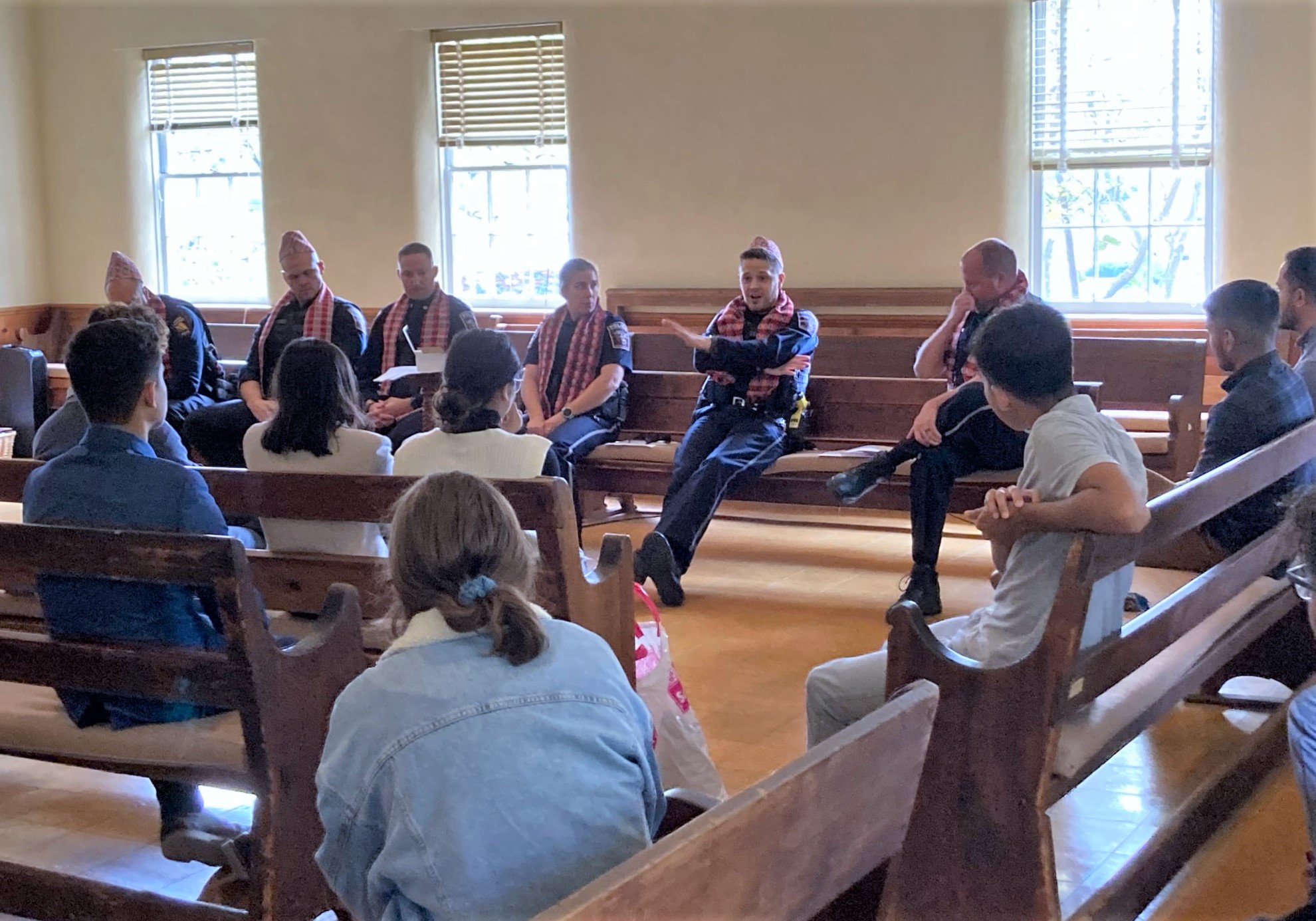 Every year, the cultural navigators at Lancaster-Lebanon Intermediate Unit 13 cultural navigators help hundreds of immigrant and refugee students and families learn about life in the U.S., access social services and lay the groundwork to meet their academic and career goals.

It’s one of the many organizations that help new arrivals from around the world find a home here, sustaining Lancaster’s role as “the refugee capital of America.”

In coming months, IU13 is looking to broaden the program in two ways: It wants to increase its outreach to employers; and to enhance immigrant communities’ self-advocacy capacity through a training and mentorship program, the New Americans Leadership Academy.

United Way of Lancaster County is underwriting the initiatives with a $35,000 Level Up & Launch grant. Lancaster Lebanon Educational Foundation is acting as the fiscal agent.

The initiatives build on previous efforts by IU13 that United Way of Lancaster County has supported. IU13 was part of the “Integration Services for New Americans” collective impact partnership, one of 16 collaborations that were funded when United Way switched to its collective impact model in 2015.

IU13’s community education coordinator is Khem Subedi. A former refugee himself, he has experienced the challenges of integrating into American life first-hand. He’s proud of the capacity IU13 has built up, which includes a roster of multilingual cultural navigators fluent in languages as diverse as Swahili, Pashto and Nepali.

IU13 is planning on launching the New Americans Leadership Academy with an initial cohort of 10 students, either later this year or early in 2023.

“We are looking to train refugee leaders,” Subedi said. “Youth, adults, anyone who is currently acting as a leader in their community, to make sure they have (access to) all the resources of the community.”

The idea came from a Kenyan immigrant, who saw the need for leadership development in the local Swahili-speaking community.

IU13 is partnering with Church World Service, the county’s largest and best-known resettlement agency, and Leadership Lancaster, which develops and conducts training programs to equip individuals for nonprofit boards and other community leadership positions.

“This program recognizes and amplifies the leadership of community members who have not always been reached by our more typical program offerings but who have much to contribute for the good of our community,” she said.

The need to promote cultural navigation services among employers, meanwhile, is one that IU13 has seen for some time.

For immigrants and refugees, the job market is one of the most challenging aspects of resettlement. Some arrive with professional degrees and strong English skills, others with no English and a history of subsistence farming or manual day labor.

They generally start off in low-wage factory and warehouse jobs and many find it difficult to progress, leaving them and their families mired in poverty. The reasons include linguistic and cultural barriers, non-transferability of educational and professional credentials — and, often, employers’ limited understanding of their potential.

Initially, IU13 plans to provide free consulting to 10 companies that hire refugees. In consultation with IU13, they would develop a cultural navigation road map, exploring ways to better communicate company needs and expectations to immigrant staff, and ways to make the company environment as welcoming as possible. IU13 staff would then be available for follow-up support.

The program would be analogous to the navigation services that IU13 provides to schools. IU13 anticipates that the work will lead to additional career pathways for immigrants, said Tim Shenk, community education program director.