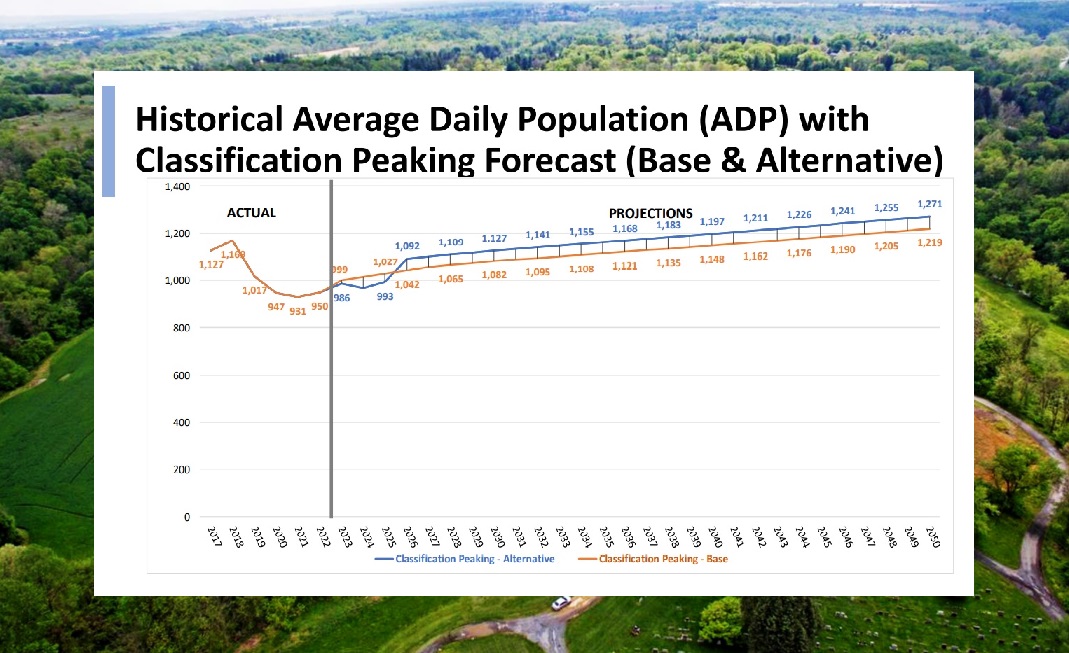 Some of the biggest factors affecting Lancaster County Prison are being seen nationwide, Wendy Ware said.

Facilities everywhere are seeing increases in detainees with mental health and substance abuse issues. And of course, the pandemic’s impact was felt not just nationwide, but worldwide.

Ware, the president of JFA Institute, presented the Lancaster County Correctional Facility needs assessment to the county Prison Board on Thursday morning.

Developed by JFA, the county’s prison design committee and county owner’s representative CGL, the assessment extrapolates from existing data to project potential space needs for the complex the county plans to build to replace the County Prison.

The assessment shows that Lancaster’s population is projected to increase 11% by 2040, to 612,723, a little under the rate for the U.S. as a whole. Males aged 15 to 44 account for a little under 19%; they are the segment considered at highest risk for lawbreaking.

The County Prison deals with two population streams, Ware noted: Central booking detainees, who are usually only there for a few hours, and admissions. The length of stay for admissions rose from 56 days to 74 days between 2017 and 2022; that’s because more individuals with lower-level charges weren’t being detained, Ware said.

The prison’s average daily population declined from 884 in 2017 to 765 in 2022. The difference between average and peak populations ranged from 4% to 16% over that period.

Crime numbers were headed downward prior to the pandemic, and the trend continued in 2020 and 2021. Crime in some jurisdictions has since rebounded Ware said; in others, like Lancaster County, it has not.

Seven out of 10 inmates are awaiting trial, while 30% are serving sentences. Nine out of 10 have been in jail before. More than a third have history of mental illness and a majority, 58%, have histories of substance abuse. A little over half are being detained on violent crime charges, including murder, assault and sexual assault. (They may have other charges pending against them as well.)

On average, individuals awaiting trial remain at County Prison for 33.8 days. For those serving sentences, the average is 153.6 days, or about 5 months.

The assessment’s “base forecast” for future bed capacity assumes that the post-Covid pattern of fewer admissions and longer stays persists, Ware said. The “alternate forecast” assumes a reversion to pre-Covid patterns: More admissions, but shorter stays. That said, “the lines are very similar,” she said.

Crunching the numbers, the needs assessment predicts a need for 1,219 and 1,271 beds by 2050. The numbers are a first step, intended to serve as a framework for discussion, Prison Board members said.

The needs assessment process included analysis of what data the County Prison should be collecting on an ongoing basis, and how to implement that, CGL’s lead planner, Chloe Jaco, said.