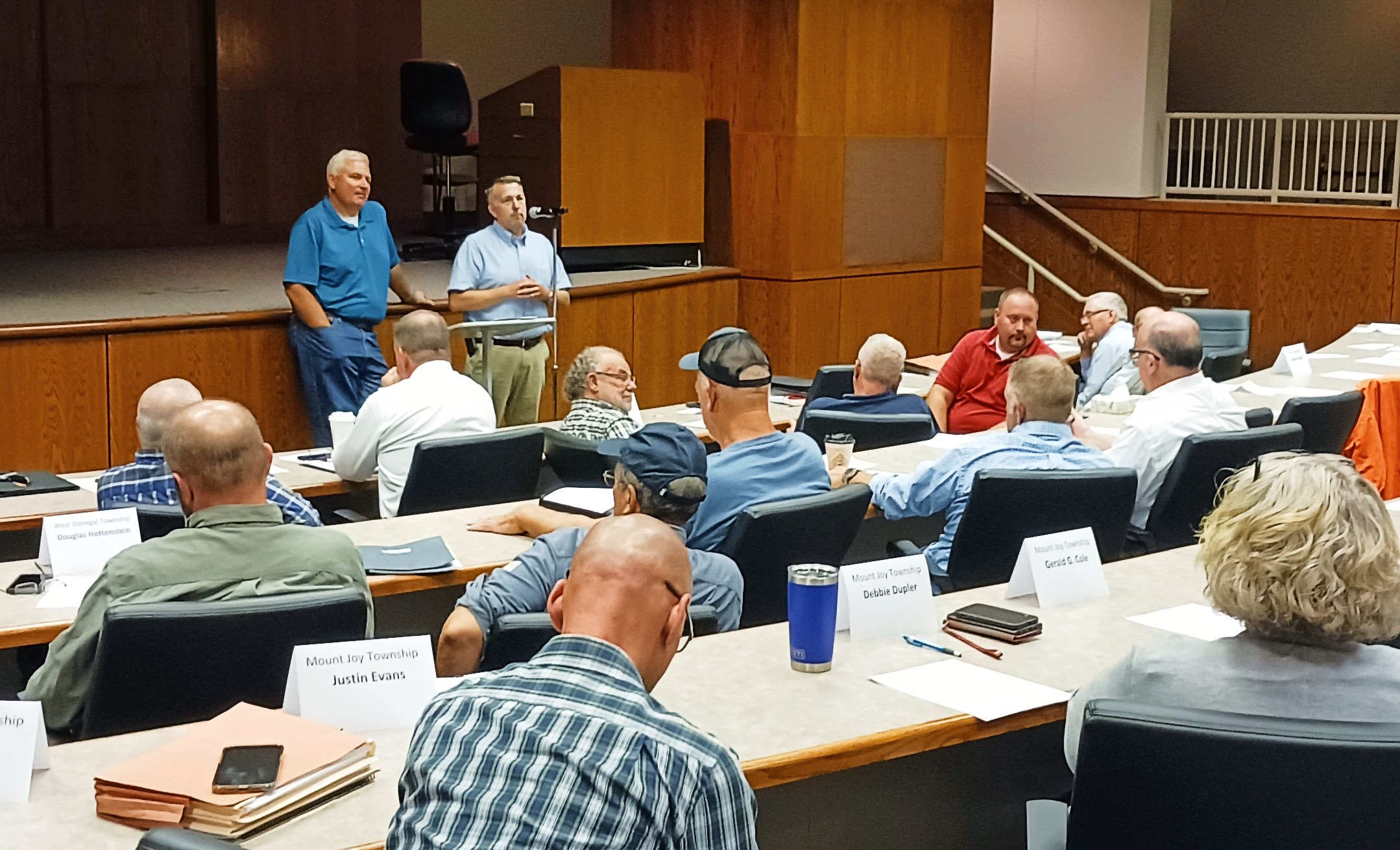 To some extent, the discussion at Wednesday’s special meeting for elected officials on creating an emergency services authority in northwest Lancaster County echoed the comments made at last week’s public hearing.

As before, proponents touted the plan as an innovative and equitable solution, carefully developed over many months, to the chronic funding shortfalls that plague not only Northwest EMS but ambulance services nationwide.

Also as before, its critics assailed both the idea and the way it’s being presented to the community. The committee behind it, they said, is rushing a poorly conceived idea through local governments using scare tactics, rather than giving elected officials and the public a fair chance to offer input or develop alternatives.

If incorporated as planned, the emergency services authority would be the first in Pennsylvania with the power to assess a mandatory fee on all property owners in member municipalities, including nonprofits such as senior care facilities that are exempt from property taxes.

For residential households, the initial fee is estimated at $78 a year, comparable to Northwest EMS current subscription rate.

Lowell Fry, who chaired Wednesday’s meeting at the Masonic Village Conference Center in Elizabethtown, said the goal wasn’t to persuade his fellow officials one way or the other. Rather, with key municipal votes looming in coming weeks, the idea was to make sure they understand the plan and all its facets — that is, “whether you agree with it or not, you at least know it.”

Fry, chairman of the Rapho Township board of supervisors, was joined by Jim Jones, director of business relations at Cornerstone Adminisystems, a specialty vendor for ambulance billing that Northwest EMS uses; and Ben Ried of Mette, Evans & Woodside, the attorney who drafted the legal documents that would bring the authority into being.

Over the course of more than two hours, they fielded dozens of questions and comments, including several heated ones, as they went over Northwest EMS’ financials and call statistics; the structure of the authority; the estimated fees it would assess and the timeline for incorporating it

Here are some takeaways from the discussion:

Is the authority legal? Is it feasible?

Usually, articles of incorporation for authorities are routine, with attorneys having to make only minor changes to boilerplate language, Ried said. This authority breaks new ground, he said, but its structure is solidly grounded in Pennsylvania’s Municipality Authorities Act and case law.

There are provisions to ensure public transparency and municipal control. A two-thirds majority vote and a public hearing would be required to raise the fee above the rate of inflation. More checks and balances are in place than for any other authority in Pennsylvania, Ried said.

“I feel confident that this works and it’ll be proven legal & functional,” he said.

Stephen Mohr, a Conoy Township supervisor, was unconvinced. The authority is bound to face legal challenges, he said, telling his fellow elected officials that if they imagine otherwise, “you’d better think twice.”

How many participating municipalities are needed to start?

Technically, if even one municipality votes to incorporate the authority, it could be formed, Fry said. He said he doubts anyone wants to take unilateral action, but if some municipalities join and some don’t, “there could be a point where some of us are along for the ride,” he said.

Municipalities who don’t join would either have to contract with Northwest EMS or find another provider. The proposed contract fee equals the amount residents would pay collectively if their municipality were participating, plus a 10% surcharge, which Fry described as an estimate of the “imputed costs” of providing contracted services.

The authority would charge other ambulance services for mutual aid dispatches, and would be prepared to be charged in turn, Fry said. Those details remain to be worked out, he said.

The founding municipalities have to coordinate precisely. Can they do so?

To create the authority, the founding governments must enact exactly the same ordinance — which among other things, lists the participating municipalities. If 12 of them are included, but one of them doesn’t enact it, that nullifies the effort, Fry said: The remaining 11 will have to start over.

The vote that really matters is the one agreeing to the legal ad in advance of the ordinance vote. That signals “put us in,” Fry said. The final draft of the ordinance will name only those municipalities that have taken that step, with the implied expectation that they will follow through with approval.

“This is 12 municipalities trying to dance,” Fry said.

Is this the best approach?

Frank Splain Jr., former Maytown Fire Co. chief and past president of the Lancaster County EMS Council, reiterated the complaints he made last week that the committee is rushing things, bullying officials and misleading them. The issue is big enough that it ought to be put before voters in a referendum, he said.

The rationales offered for the authority don’t hold together, he said. He called on its backers to switch gears and launch a grassroots effort to unite all the county’s EMS organizations, as he had tried to do on the EMS Council.

Scott Kingsboro, Northwest EMS’ executive director, enthusiastically agreed: A countywide approach would be a great idea. He suggested the authority could be the mechanism for making that happen.

“We have to start it someplace,” he said. The municipal representatives on the authority will have considerable leeway: They could enact lower fees, or no fees, or a mix of fees and subscriptions, or something else entirely. Once they do, municipalities will have a grace period to exit if they want to.

The authority might take two years to enact a plan, he said, and that’s fine, but something has to be done: “We can’t keep spinning our wheels.”

“I’m in support of this because of the alternative,” he said. “I don’t see anything else being offered … and I see down the road what’s coming. What’s coming is far more expensive.”

Fry acknowledged that many opponents are calling on the committee to slow down, postpone the vote and give the public more time to learn about the authority and elected officials more time to consider what they would be getting into.

That’s doable, he said, but there have to be tangible reasons for going that route, some way in which doing so would be productive.

“My question would be, what would another three months or six months or a year do to your decision?” he said.

By the numbers: The financials

(Return to beginning of main story)

At Wednesday’s special meeting, Northwest EMS provided financial statements covering its past three years, as well as projections covering 2022 through 2024.

Overall, Northwest EMS’ financial trajectory “is not healthy,” said Lowell Fry, chairman of the Rapho Township Board of Supervisors. In 2021, Northwest EMS partly covered its deficit by liquidating some of its investments, he noted.

Still, a deficit of $500,000 doesn’t justify setting up an authority empowered to impose liens for nonpayment, said Bridey Hannold of East Donegal Township. The municipalities in Northwest EMS’ footprint could cover that shortfall with a tax of around $8 per capita, she said, significantly less than the proposed $78 per residential household.

However, that would give tax-exempt entities a free ride, said Marc Hershey, Elizabethown council president and an emergency medical technician at Northwest EMS. It would also require all the municipalities to impose a tax increase in concert, voluntarily.

Much of that is driven by payroll costs, which are projected to rise from $2.88 million to $4.19 million, or 45%. That’s a mix of higher wages and additional personnel to expand service, Fry said.

Its projected 2024 insurance reimbursements total $3.35 million, leaving a gap of $2.82 million to be covered by the fee it levies. Dividing that figure by the number of properties in the member municipalities yields the projected $78 rate for residential households, Fry said.

The committee is still working through the intricacies of how to equitably levy the fee on commercial properties and institutional entities such as schools or nursing homes, so the revenue figures for those categories are speculative, Fry said.

The fee would replace Northwest EMS’ subscriptions, grants and municipal contributions, all of which are zeroed out in the pro forma.