Lancaster city Chief Planner Douglas Smith, standing beneath the display monitor, and RegenAll Climate Strategist Franklin Egan, at Smith’s side, listen to a comment during a session on climate planning at Community Mennonite Church of Lancaster on Thursday, June 9, 2022. (Photo: Tim Stuhldreher) 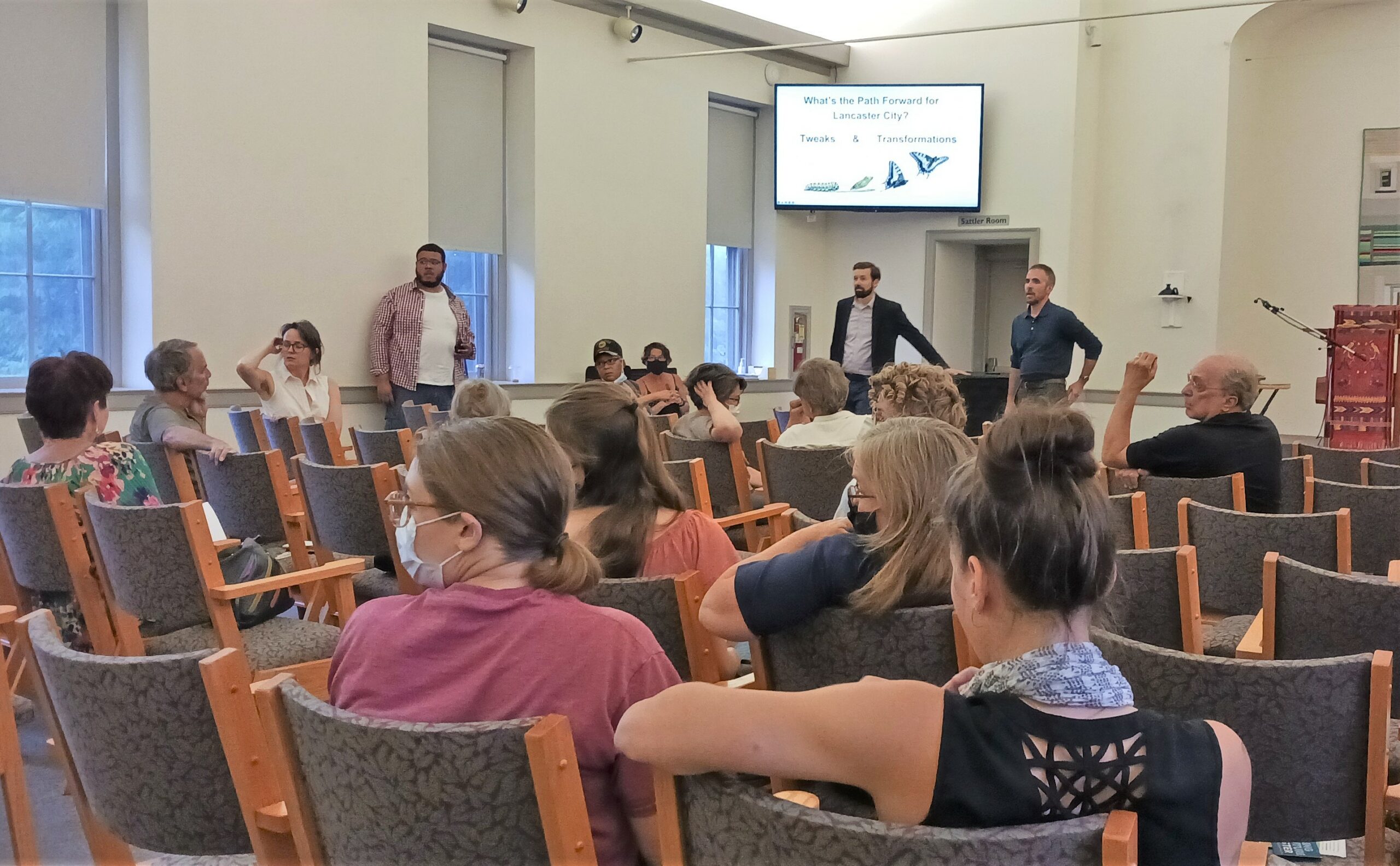 Some two dozen city residents had no shortage of comments last week on proposed ways for Lancaster city to reduce its carbon footprint.

“We’re so grateful for your time and your input,” community organizer Malinda Clatterbuck said at the close of Thursday evening’s Lancaster City Climate Action Session at Community Mennonite Church.

Conducted by climate nonprofit RegenAll, the session was intended to garner community reaction to climate strategies being considered for inclusion in Lancaster’s comprehensive plan, now in development. It was the first in a series of four.

The city released a climate action plan in 2019 that serves as the starting point for the current conversation. Going forward, planners are considering strategies to reduce carbon emissions as well as build resilience for dealing with impacts such as more extreme temperatures and precipitation.

On Thursday, after an introductory presentation on the issue, participants were invited to consider six possible interventions: One minor “tweak” and one major “transformation” in each of three categories, as follows:

Expanding biking will be challenging, given how recklessly and speedily motorists drive in Lancaster, participants said. Nor were they optimistic that a bus service would entice many people here to forego car transportation. Many cited their frustrations with the area’s existing transit service, Red Rose Transit Authority: Its buses run fairly infrequently and often don’t hew to the published schedules, contributing to low ridership.

Regarding a green building code, questions centered on its practicality and what effect it would have on housing prices. Historically, the city has simply adopted the international building code, retired chief city planner Paula Jackson said.

Diana Martin, executive director of the Hourglass Foundation and a RegenAll advisor, expressed reservations about installing large arrays on farmland. Lancaster County’s agricultural lands are a “national treasure” and will only become more valuable as farmland nationwide comes under more stress; they deserve careful stewardship, she said.

The urban gardening proposal generated comments about the decline of pollinators and the potential for disputes between neighbors over pesticide use. As for regional planning, commenters pointed out that the mechanisms don’t exist: It’s been tried many times, Jackson said, but municipalities are entitled to set their own zoning and planning codes, and those that rely on high growth simply opt out when collaborative attempts are made to rein in sprawl.

The climate sessions are one of many public-engagement efforts the city is making as it develops its comprehensive plan. Development of the plan will continue over the summer and fall, with adoption and implementation slated for winter 2022-23.

There are three more Lancaster City Climate Action sessions coming up. Two are virtual and one is in person, as follows: