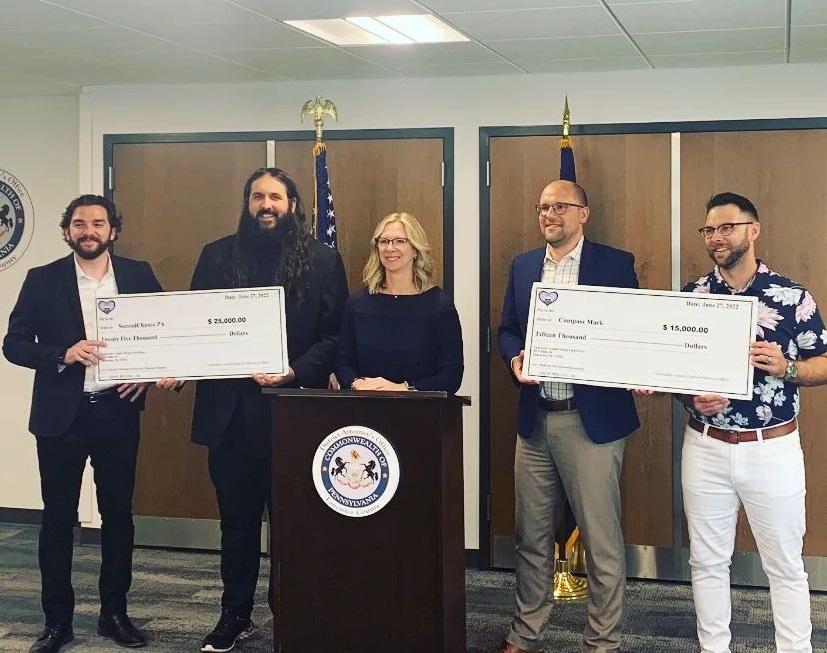 The Lancaster County district attorney’s office on Thursday announced the debut of a “new and improved” program, in cooperation with two local nonprofits, to divert low-level offenders with addiction issues into voluntary drug and alcohol treatment.

“This investment in rehabilitation will lead to greater public safety as participants will ultimately be less likely to reoffend,” Adams said.

Compass Mark will offer access to its “Skills for Life” program, which teaches participants about the consequences of substance abuse and provides training in coping skills, decision-making and goal setting.

In connection with the initiative, Second Chance PA and Compass Mark are receiving donations of $25,000 and $15,000, respectively, from the district attorney’s office’s asset forfeiture fund.

The fund will also be used to underwrite $50 scholarships to reduce the “Skills for Life” tuition cost from $125 to $75. There is also a mandatory $100 Pathways for Recovery program fee.

Building on past efforts

Eligibility for Pathways to Recovery will determined by the district attorney. In general, it will be limited to offenders with minor, nonviolent criminal records.

Participants who successfully complete all requirements will be eligible to have the charges against them dismissed and their records expunged.

Pathways for Recovery builds on earlier diversion initiatives by her office, Adams said. Improvements in the new edition include a shift away from box-checking measures … many of which were behind a paywall of administrative fees,” according to a news release.

In addition, Lancaster County has treatment courts that allow individuals dealing with substance abuse to complete recovery programs as an alternative to criminal sanctions and punishment.

Led by Christopher Dreisbach, a former addict himself, Second Chance PA is an outgrowth of his treatment organization Blueprints for Addiction Recovery. Dreisbach has been an active local voice for addiction and mental health policy reform, setting up Second Chance PA’s partnerships with local police departments and joining with the county to reform its response to mental health crises through a program called “Gateways.”

“Diversion programs are often far too limited and restrictive to affect real change,” Dreisbach said, praising county leadership for empowering stakeholders “to build legitimate programs aimed at decreasing the public cost and waste of outdated policies, reducing recidivism and criminal behavior, and ultimately increasing the rate of meaningful recovery experiences across the county.”

Through Second Chance PA and Gateways, “we’ve been able to turn hundreds of potentially devastating police encounters into meaningful gateways to addiction and mental health recovery,” Dreisbach’s colleague Ben McCoy said. “Pathways to Recovery is the next step.”

Compass Mark, which serves Lancaster, Lebanon and Chester counties, has worked in addiction treatment and prevention for more than half a century.
The organization is honored and excited about its role in offering “an important skill-building component for participants in this promising county-wide diversion initiative,” Executive Director Eric Kennel said.

The county’s asset forfeiture fund has been at the center of several high-profile news stories in recent years.

Adams’ predecessor, Craig Stedman, now a county judge, used a portion of the funds to lease an SUV, prompting a public battle and a lawsuit filed by Stedman against the county commissioners.

Adams subsequently restructured how the funds were used. She also discontinued Stedman’s lawsuit, but a battle over his legal fees continues.

(Editor’s Note: A previous version of this story incorrectly referred to Blueprints for Addiction Recovery as a nonprofit. It is registered as a business corporation.)