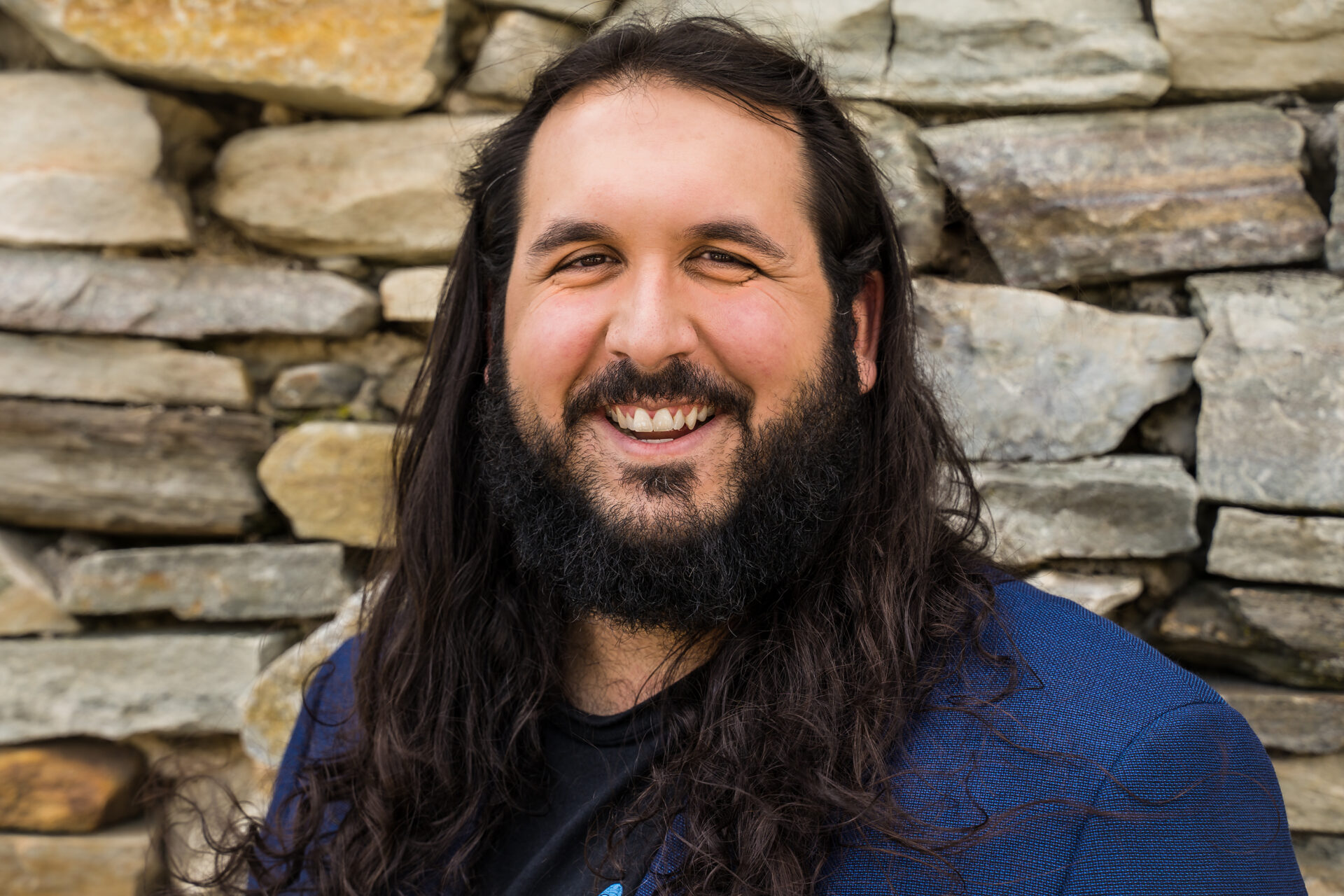 As the owner, executive director or leader of more than half a dozen businesses and initiatives in Lancaster County, Chris Dreisbach is quickly becoming a household name.

Dreisbach says he has dedicated his life to advocating for and serving those struggling with substance addiction and homelessness and those reentering society post-incarceration. He is best known for his work with Second Chance PA, a program that provides addiction treatment professionals to join police officers for substance abuse-related calls.

Dreisbach sat down with One United Lancaster to talk about his professional goals, personal stories and his "favorite thing in the universe."

One United Lancaster: Let's start with your name and job titles.

Chris Dreisbach: So my name is Chris and I'm the CEO and founder of Blueprints For Addiction Recovery, co-founder of Second Chance PA program, co-founder of the Gateways mental health program. I am the owner of Dough Heads Waffles, which is an awesome food truck. Also Arch Duke Investments. I'm a Realtor at Weichert Realtors - welcome home - and co-owner of Red Rose Sports Cards. There's more, but I can't think of them.

OUL: Do you remember your first job?

OUL: Which means that you are how old?

Dreisbach: I am 35 years old, I've packed a lot into these years, at least I tried to.

OUL: What got you interested in your various career paths?

Dreisbach: It's a really interesting story. So when I was younger, I started drinking and using drugs and so on and so forth and eventually found heroin and it kind of spiraled my life off the rails. I ended up getting convicted of felony burglary and different things like that and I got to go to jail a few times.

I spent several hundred days in jail over the course of my age 18-to-21 period. A judge finally shipped me from Allentown, where I'm from, down here to beautiful Lancaster County. And I was very mad that he sent me here because I didn't want to come here, but it was the best thing that ever happened to me because I love it here.

When I got here, I went to The GateHouse, the halfway house in Lititz. They gave me an opportunity and that's really all I needed. Once I got that opportunity I was able to get a job at Lyndon Diner waiting tables. I worked there as much as possible for a couple years and I was able to work off all my debts and everything back in Allentown.

OUL: Then what happened?

Dreisbach: At one point in 2010, I had a bunch of friends at The GateHouse who were about to be homeless at the same time, about 10 of them. So what I did was, I rented a house in Lancaster City and I let them move into that house. I established some rules to help them on their path to sobriety, and seven of those 10 guys stayed sober long-term.

So then more people wanted to come in, so I got another house and another house. I almost didn't want to start a business, but then it kind of happened and took off, so I rolled with it.

After a little while, we had a couple guys with construction skills so we started a construction company called A New Life Painting & Repairs, primarily to give guys trade jobs and purpose, and that really took off, too.

So I did the recovery housing thing for a while and moved it up to 135 or 140 beds. We were bringing people in from treatment, from jail, from wherever they were and housing them and giving them a fresh start.

OUL: Was that housing initiative a catalyst for becoming a Realtor?

Dreisbach: In 2015 I got real tired of waiting for other Realtors to let me in to see houses. I thought it'd be interesting to get my real estate license, but I'm also a convicted trespass burglar guy, so it doesn't really seem logical, right, because I broke into houses and now I want to get into houses legally. It's one of those funny things.

Pretty much everyone told me it was nuts and when I went into the first [real estate office], they laughed me out, which was embarrassing. So I went to another one and got laughed out and went to a third and got laughed out of there too because of my criminal record. Then I finally found Weichert and they said they liked me and what I was doing and agreed to [sign off on my good character]. About six months later, I got my real estate license, and it's worked out really well for the past six years.

OUL: So tell me more about some of your other projects and organizations.

Dreisbach: So in 2016, we opened Blueprints, which started as an outpatient-only facility. We've since moved on to add a residential component, which is really cool because our partial hospitalization program comes with that housing. The housing is apartment-style living with two other people and you learn to grocery shop on a budget, do laundry and all the other things we take for granted as a normal adult. We really push life skills because there's a lot of treatment centers that skip that part, and that's worked out really well.

In 2018 I ran into [police] Chief [Edward] Cunningham in Elizabethtown Borough, and he was talking about how he used to have to Narcan people all the time and really wanted to see what he could do to make the area better from the opioid crisis.

We came up with this crazy idea where, instead of arresting people, we would give people access to treatment instead of incarceration. This was huge for me because I lost several hundred days of my life living in a cage, very much against my will.

I'm just so passionate about keeping people out of prison when they don't need to be, because when you have a mental health problem or a substance abuse disorder, those are illnesses, and getting someone in jail does not treat them right in any shape or form. Second Chance, it's like my favorite thing in the universe.

In 2020, not long after the Muñoz shooting, I was standing outside a crisis intervention training with Chief [Brian] Wiczkowski and he was saying that he never gets much [mental health] help because everything closes at like, 4:01 p.m., and most mental health crises happen after that. He said, "Wouldn't it be cool if we had a 24/7 response just like Second Chance?", and within a week we had launched Gateways, which is a mental health response instead of a substances response.

Now, we're actually merging Gateways with the County Behavioral Health Department. It's not a million percent set in stone, but we did get a grant for it.

Then of course, we opened the card shop and we hire people who are coming out of jail or are marginalized in some way to make up our entire staff.

OUL: Do you know, off the top of your head, how many people you employ at each place?

Dreisbach: I think 90 at Blueprints, I think 15 or so in the food truck and two or three at the card shop. Now that Gateway is separating, there'll be eight to 10 people there and on the real estate side, it's just me. And my little brother flips houses, so it's just us flipping houses together.

OUL: So changing subjects a bit; you mentioned before that you had dogs.

Dreisbach: My dogs are Charlie and Philly. Charlie is 12, he's yellow. He was abused out in Pittsburgh and my ex-wife and I got him in 2009.

Philly is my German Shepherd; I love him. He's 11, about to be 12. He is also a rescue and I just love him so much. They're a little annoying because I have to leave every eight hours to make sure they go outside and all that stuff, but they're just the most loyal. All they want is a Beggin' Strip and some water and some pellets in the morning; that's why I love them.

OUL: So besides being with your dogs, what else do you like to do in your free time?

Dreisbach: When I have any I like to play disc golf. I like movies too, but I don't really do much else. I've kind of integrated all of my hobbies and all of my everything into my businesses. All of the recovery stuff, the sports cards, the real estate, I've just integrated into some kind of business.

OUL: That's great! Tell me more about that.

Dreisbach: We started in 2019, chronicling the two and a half years of Second Chance and all of the people that we've been able to divert from jail into treatment and then follow up on some of the successes.

It was produced by TT Productions, a local group. They're really great guys. And we'll hopefully have it done mid-2022 and premiere it at Penn Cinema or Zoetropolis, depending on what happens with the pandemic.

OUL: That's actually a good segue into my next question. What has working in the Covid-19 pandemic been like for you?

Dreisbach: Wild. Real estate stuff was just interesting, but in recovery stuff specifically, there's so much value in the one-on-one human interaction and to go from hopeless to living a life of purpose, it requires a lot of human bonding. A lot of things went to telehealth and tele-psychiatry and all of that. It was a little difficult in the beginning, but I think everyone adapted pretty well.

OUL: Do you foresee telehealth continuing even after the pandemic?

Dreisbach: I hope to God it does. For a lot of people it's much more convenient. One of the biggest problems in outpatient treatment is that a lot of people who are popping out of jail or popping into treatment don't have cars and they don't want to go on a bus. It makes it a barrier to treatment and telehealth kind of broke that barrier.

All of these types of barriers can be broken, we just have to find a solution. The problem is that people don't want to find solutions unless the problem impacts them directly and that's what I run into a whole lot.

OUL: What kind of goals do you have for your projects right now?

Dreisbach: I'd certainly love to see some of the laws changed surrounding substance abuse disorders. I would love to work on pushing more toward the Portugal model. The country started this things where they decriminalized all drugs and whenever someone is found to have a problem, they go in front of a little council of a few people and are asked if they want help that day. And if the person says no, they say, "All right, please keep us posted, whenever you're ready." It's just so open and caring that overdose rates have completely tanked because it's not taboo; there's no shame.

There's so many people in our community in their 20s, 30s and even 40s that don't have to die from this thing, but they don't know any other way out.

OUL: How can people support you in your work?

OUL: Is there anything else you'd like people to know?

Dreisbach: If you or anybody that you know is struggling with substance use disorder or mental illness or anything of that nature, don't be ashamed. Don't be afraid to reach out for help because help is available. We're all ready to help 24 hours a day.