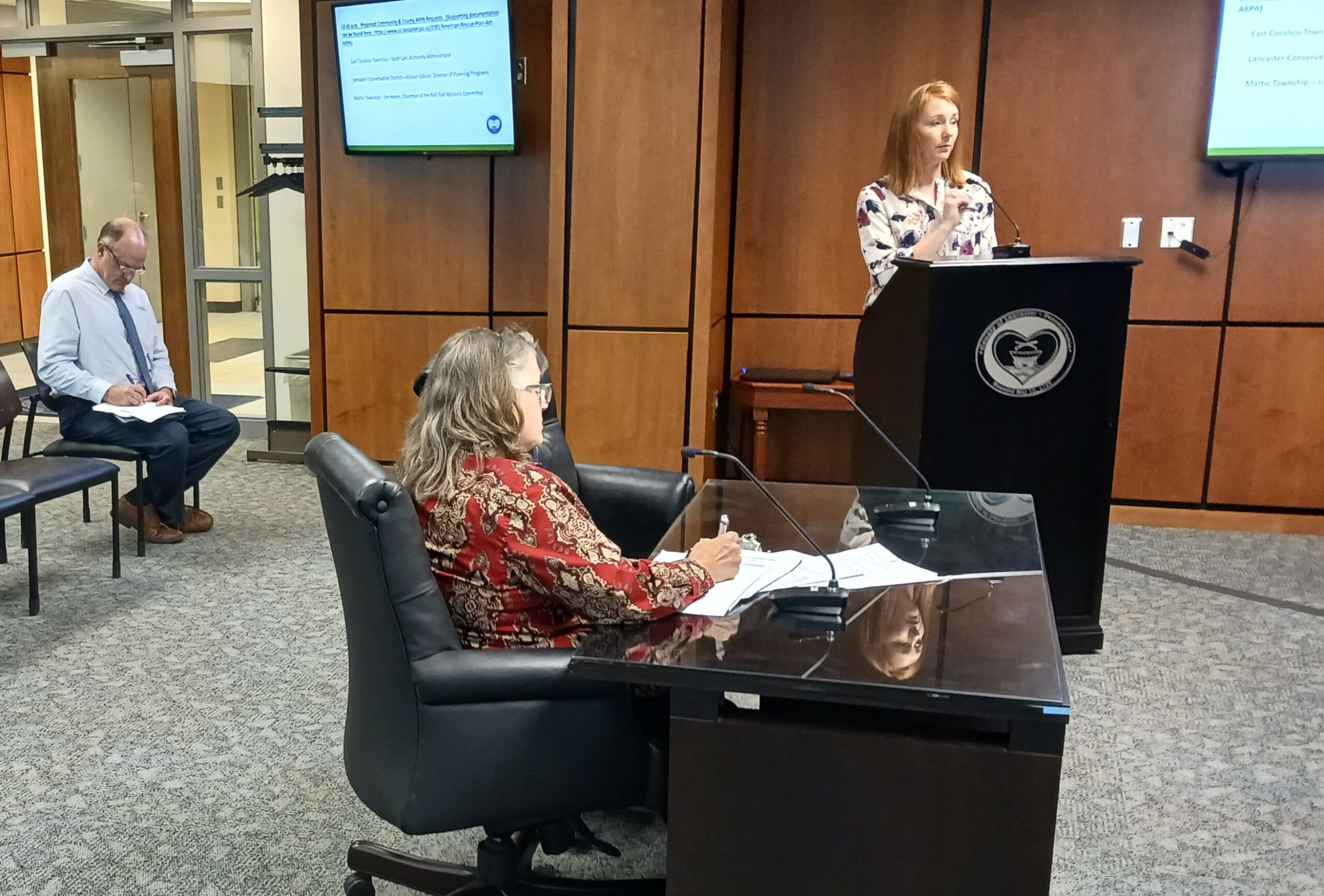 At their work session Tuesday, the commissioners discussed four of the 30 community applications received to date. All four have been reviewed by the county’s ARPA working group and determined to be eligible for funding. They are:

All three commissioners expressed support for the rail trail project. The requested amount is small and will support a project, the rail trail, that involves multiple municipalities and is a regional recreational resource.

They expressed support for the Clean Water Partners’ project as well, but commissioners Ray D’Agostino and Josh Parsons had reservations about providing the full $4.6 million right out of the gate. Not knowing what future requests might come in, it would be hard to allocate that much, Parsons said.

The $4.6 million is a “priority” subset of a larger request that totals $27.5 million. Clean Water Partnerships’ Director of Strategic Partnerships & Programs, Allyson Gibson, said the group ranked its projects based on the rubric in the Countywide Action Plan, giving highest priority to those that would reduce pollutants the most and involve the greatest level of collaboration.

That was coupled with an analysis of which ones were the most shovel-ready and hewed closest to the county’s objective that ARPA fund long-term transformative projects. If Clean Water Partners receives less funding, it will rerun its analysis, Gibson said.

Chris Thompson, district manager for the Lancaster County Conservation District, said the projects would build on Clean Water Partners’ existing work and that the partners will monitor stream data to document improvements, he said. The funding, he said, would be an investment in “Keeping Lancaster Lancaster.”

Commissioner John Trescot, the board’s sole Democrat, suggested he would be open to providing the full $4.6 million. The projects are well documented and would have countywide benefit, and the ARPA funds would leverage about $8 million in additional funding, he said.

As for East Cocalico Township’s two infrastructure projects, the commissioners agreed to defer action, saying they wanted to see what infrastructure projects other municipalities might bring forward. Trescot and D’Agostino also suggested that the projects are the sort of normal maintenance that should be covered by revenue from ratepayers.

Discussion of four projects led to a larger conversation about the county’s ARPA priorities. D’Agostino said preliminary calculations indicate the county has a claim to about half of its $106 million from ARPA: $18 million spent to date, plus about $35 million in future uses, or $53 million total.

That leaves the other $53 million for potential allocation to community partners. He suggested allocating $20 million during the county’s first ARPA round, which ends Aug. 31, leaving $33 million for later.

He also questioned if the county truly needs to retain half the funds. Much of that is coming from ARPA’s “revenue replacement” calculation, but the county has actually lost very little revenue due to the pandemic, he said.

D’Agostino pushed back, saying that county government’s primary goal for ARPA is, and should be, ensuring the health of its own finances and infrastructure. Bringing ARPA funds into the county general fund can free up other funds, he said.

Echoing comments by Parsons’ last week, he noted that Congress may amend the ARPA law to loosen the rules on infrastructure spending, potentially allowing the county to put ARPA money toward building its new prison.

It’s hard to argue that spending ARPA funds on such an important infrastructure project isn’t a legitimate use, he said: “It’s a matter of how much.”