Lancaster County is aiming to have its new prison built, fitted out and occupied by late 2026, according to a tentative timeline unveiled at the county commissioners' work session Tuesday.

The timeline allocates about two years for the design and regulatory approval process, followed by another two years for construction. 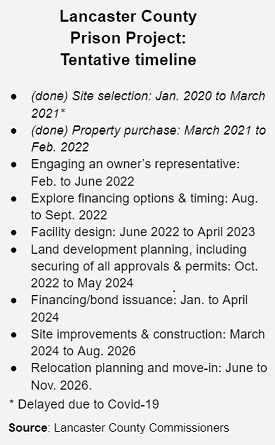 6 may seem like a long way off, but for a project of the prison's size and complexity, it isn't, Commissioner Ray D'Agostino said.

The timeline shows nine phases in all. The first two, site selection and purchase, are finished: The county completed the latter last month with the settlement of its $3 million purchase of 78 acres of open land at 100 Greenwood Ave. in Lancaster Township.

On Wednesday, the commissioners will vote on allocating $500,000 from the county's Capital Improvement Reserve fund to cover an assortment of initial costs at the property, including, signage, security and preliminary site development.

In response to commissioners' questions, Budget Services Director Patrick Mulligan said he couldn't immediately provide more specifics, but "anything we need to spend out of it, we'll bring to your attention." The allocation should be enough to cover costs through late fall or early winter, he said.

Meanwhile, D'Agostino said the next step is to hire an "owner's representative," a professional firm charged with overseeing the project from inception to completion on the county's behalf. The county is working on a request for proposals and hopes to have a company selected by early summer.

Owner's representatives are firms with expertise "in all aspects of project management," according to a handout provided by D'Agostino. Their familiarity with procurement, coordination, regulatory approval and so on helps bring projects to a successful conclusion on time and on budget. 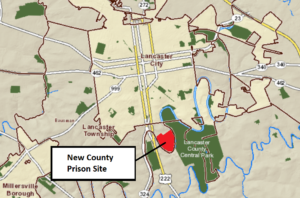 The prison project is well beyond the facilities department's normal scope of work, Devonshire said. An owner's rep, he said, will ensure the county gets a state-of-the-art facility that incorporates nationwide best practices and yields the "best bang for our buck."

Pennsylvania law bars local governments from hiring a general contractor and making that entity responsible for subcontractors, Pfursich said. Instead, they must issue separate prime contracts for major building systems such as plumbing and electricity: Without an owner's rep, that creates potential management and coordination issues.

The commissioners emphasized that the tentative timeline is just that — a tentative plan subject to revision. Parsons noted the ongoing disruptions in world markets and supply chains:

Hopefully things will have calmed down by the time construction is scheduled to start, but "we're going to have to be flexible," he said.

The commissioners have said there will be abundant opportunity for public input during the design and planning of the prison. In response to a question Tuesday from One United Lancaster, D'Agostino reiterated that commitment, though he said the details of that public engagement process have yet to be decided.

There has been considerable public involvement already on the site selection and land purchase, D'Agostino said, and "that level of transparency will be maintained, if not more."