(Editor's note: This article is part of One United Lancaster's Responding to Covid series.)

The coronavirus pandemic is both a health crisis and an economic crisis. And as millions of workers were laid off and fell behind on their rent, it threatened to become an urgent housing crisis as well.

Nationwide, nearly a third of all renters failed to make on-time payments last spring. By September, the National Council of State Housing Agencies estimated that 240,000 Pennsylvania households could face eviction by January.

Fortunately, thanks to unprecedented levels of federal support, housing displacement here and nationwide has been held to lower levels, at least so far, than advocates feared.

In Lancaster County, the effort to keep families in their homes has been led by the Eviction Prevention Network in cooperation with the Lancaster County housing and redevelopment authorities.

Through the EPN, they developed know-how, organizational relationships and a model that could be scaled up to meet the challenges of the pandemic, said Mike McKenna, Tabor's president.

The following interview with McKenna has been edited for length and clarity. As he makes clear, even with the EPN serving as a head start, coping with the pandemic was a herculean task:

McKenna: In the aftermath of the pandemic coming to Pennsylvania and Lancaster County, we anticipated major fallout, with all of the shutdowns and job losses. We knew that for the scale of the need, we needed to expand.

We got Lancaster Cares funding first. Then the CARES Act passed, and funding became available through HUD (the U.S. Dept. of Housing & Urban Development) to counties and cities later that spring and early summer. So that's when we had a chance to get funding for "EPN 2.0," which was the expanded network.

We used the EPN model for those new funding sources. We had all the checklists, we had all the forms, we had all of those elements that it took to evaluate for eligibility, to disburse the funds, to communicate with potential beneficiaries. ... It helped us to be ahead of the game when Rental Relief launched.

Rental Relief was Pennsylvania's eviction prevention program, which operated last summer and fall using $150 million from the CARES Act. Unfortunately, its application process was cumbersome, and it capped assistance at $750 per month per lessee — less than market rent in many parts of the state.

In Lancaster County, the county commissioners provided supplemental local CARES Act funding so Rental Relief could reimburse landlords in full. That was a "game-changer," McKenna said, and helped the program assist a total of 530 households. But the application process remained a hurdle.

McKenna: The requirements for supporting documentation were a challenge. If we didn't have all of those pieces, it made it very difficult to make a determination that led to an assistance payment. Ultimately, there was simply not enough time to support everybody.

Now it has suspended that program to make way for the Emergency Rental Assistance Program, ERAP. Offered through the county housing authority, it makes nearly $36 million available for rent and utility assistance.

Around 500 applications poured in just in the first three days. EPN members and other nonprofits are providing case management and other administrative assistance. 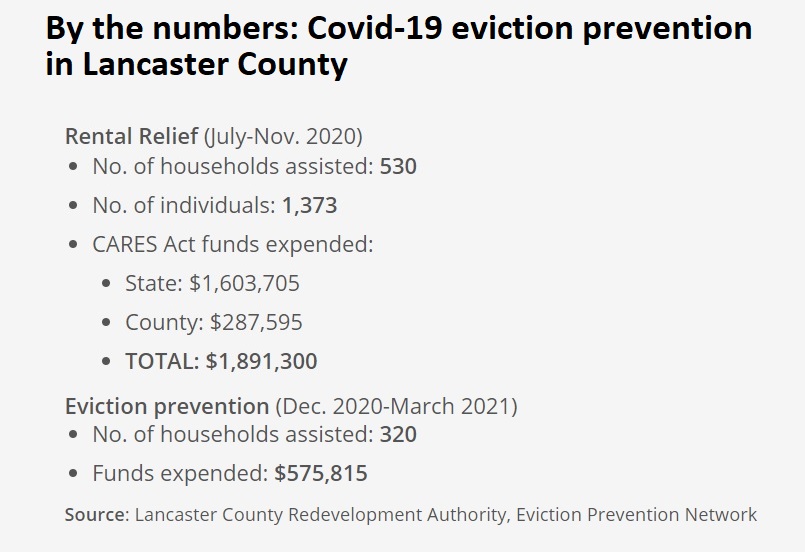 McKenna: We were fortunate in that we could pivot very quickly. "OK, Rental Relief has sunset, now we're back to EPN, and we're going to leverage our CDBG money."

Now we're in a position where, after some really busy months of EPN assistance, we're poised to serve a very large number of households through ERAP. We are cautiously optimistic in the design of this program that we're accounting for some of the administrative complexities that bogged down Rental Relief.

We're staffing up considerably at key agencies. Plus, we have a broader access network, additional sites around the community who are going to be offering application assistance on site. So people can find a place close to where they live, and technology, hopefully, isn't a barrier.

They'll have someone they can talk to at the site if they don't know how to answer a question. If for some reason the person who's on site isn't sure, there's a help line they can call where they can get additional guidance on how to complete the application. Some of the partner sites are also able to do follow up with clients to make sure that we're receiving all the supporting documents.

We've been doing a lot of outreach to landlords, tenants and utility companies, to make sure they know the program is available.  It may take some time to get the initial batch processed, because there is a prioritization component to this, but help is on the way through this new program, and the scale of the resources is massive.

Meanwhile, the federal eviction moratorium is scheduled to expire March 31. There are 362 landlord-tenant actions pending in the Lancaster County court system, administrator Russ Glass said, though not all are necessarily subject to the moratorium.

McKenna: I think it would be smart to pair the assistance funding with an extension on the moratorium. It would give, both on the tenant side and the landlord side, peace of mind while this new program (Emergency Rental Assistance) is being released to the community. You have significant arrears, but you know within the next few months you will be made whole.

There's a  public health dynamic. It's still a very serious pandemic. There's been progress, thankfully, but we still have a long way to go. For people to be at risk of displacement, losing their home, having to double up or having to move into congregate living in a shelter environment, that would be very risky from a public health standpoint. …

McKenna expects the post-pandemic recovery to be uneven. Some people can go back to their pre-pandemic jobs; for others, however, those jobs no longer exist.

McKenna: Especially in the near term, households that have really been struggling and who have a large amount of arrears, to be able to clear that out and reset from a budget standpoint on their rent, utilities, late fees et cetera, I think it's going to be huge. …

One of the things I've had conversations with the city and county about is that we need to preserve an eviction prevention safety net in Lancaster County. We can't go back to any scenario where priorities change and we say eviction prevention doesn't matter.

Eviction prevention in our community started as a pilot project. It was a demonstration project, essentially, and now it's considered, as it should be, a mainstream service. I  think, to everyone's credit, they're very receptive to that conversation. Because the benefits to landlords and communities are being seen.