Speaking from the audience during one of the panel discussions, developer Ben Lesher succinctly articulated one of the themes of the "Lancaster 2040" summit.

Held Thursday at the Ware Center in downtown Lancaster, the forum brought together leaders from government, business and nonprofits to discuss Lancaster County land use and policy. Building on the county's comprehensive plan, Places2040, the event was dedicated to pushing "beyond boundaries," whether conceptual, municipal or ideological.

Lancaster County has 60 municipalities, each with its own administration and zoning code. Pruning those thickets of red tape and promoting cooperation would make it easier to tackle many of the county's challenges around affordable housing, economic development, farmland preservation and environmental health, summit panelists and participants said.

Joshua Druce, president of the Coalition for Smart Growth, one of the organizations behind the event, said he was impressed at how prominent the themes of Places2040 were in the discussions, and by attendees' eagerness to join forces with each other. Organizers will spend the next several weeks going through the feedback they receive and figuring out their next steps, which could be a follow-up summit or events based around specific issues, he said.

"It's great to see this level of enthusiasm," said Scott Standish, executive director of the Lancaster County Planning Department, which developed Places2040 and helped set up the forum.

Following an initial plenary session and keynote speech, the capacity crowd split up for three sets of breakout sessions, each with five topic areas. Here are some of the takeaways: 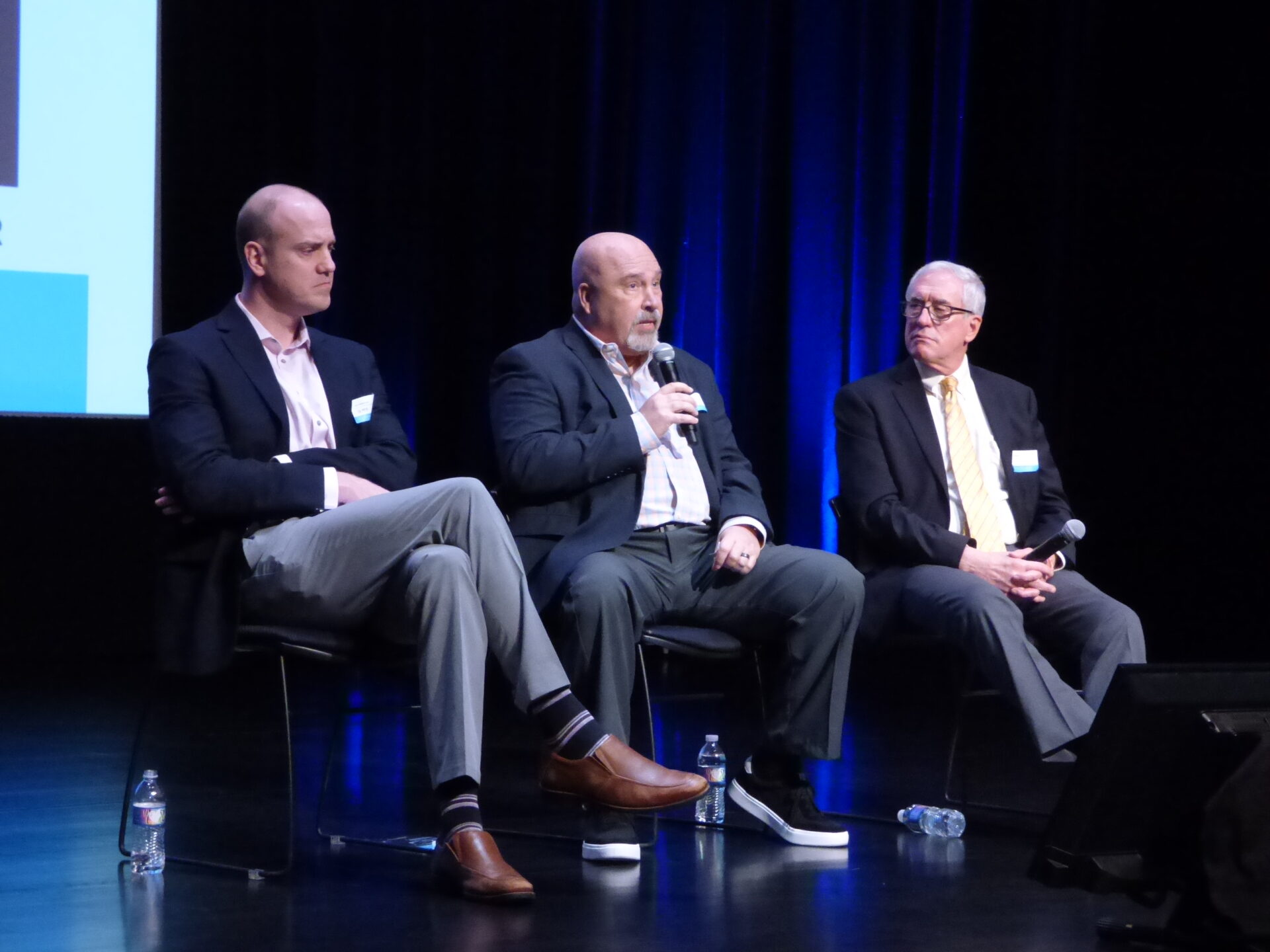 Housing studies indicate Lancaster County needs around 18,500 more rental units affordable to households making less than half the local average income — or 1,850 new units a year for a decade.

Exclusionary zoning provisions often preclude affordable projects, as do prevailing-wage laws and other conditions that come with government funding. The latter can raise costs up to 40%, leading to development costs of around $300,000 per "affordable" unit.

Lesher, the developer of Stadium Row and a planned project at the Lancaster Stockyards, said he's hard pressed to find parcels of land anywhere with rules that allow multi-family development at reasonable cost.

Just sorting through each jurisdiction's rules is expensive and time-consuming, participants said. That complexity favors larger developers that can afford to lawyer up, and shuts out smaller players, said Ethan Demme, an East Lampeter Township Supervisor.

It would pay dividends beyond lowering costs, panelists said. It would be easier for farmers to set up home-based businesses legally, supporting family farming and Lancaster's Plain community. More flexible zoning would allow people to live closer to work, as would including workforce housing requirements when offering economic development incentives to companies.

Changes can be experimental and incremental, they said. Try tweaking something; if it doesn't work as hoped, try something else.

The law should reflect realities, such as people who live in hotels long-term due to the housing shortage, said Angela Cuthbert summarizing the discussion she moderated between Demme and Jen Koppel, former director of the county homelessness coalition.

"Make it legal to help our neighbors," Cuthbert said. 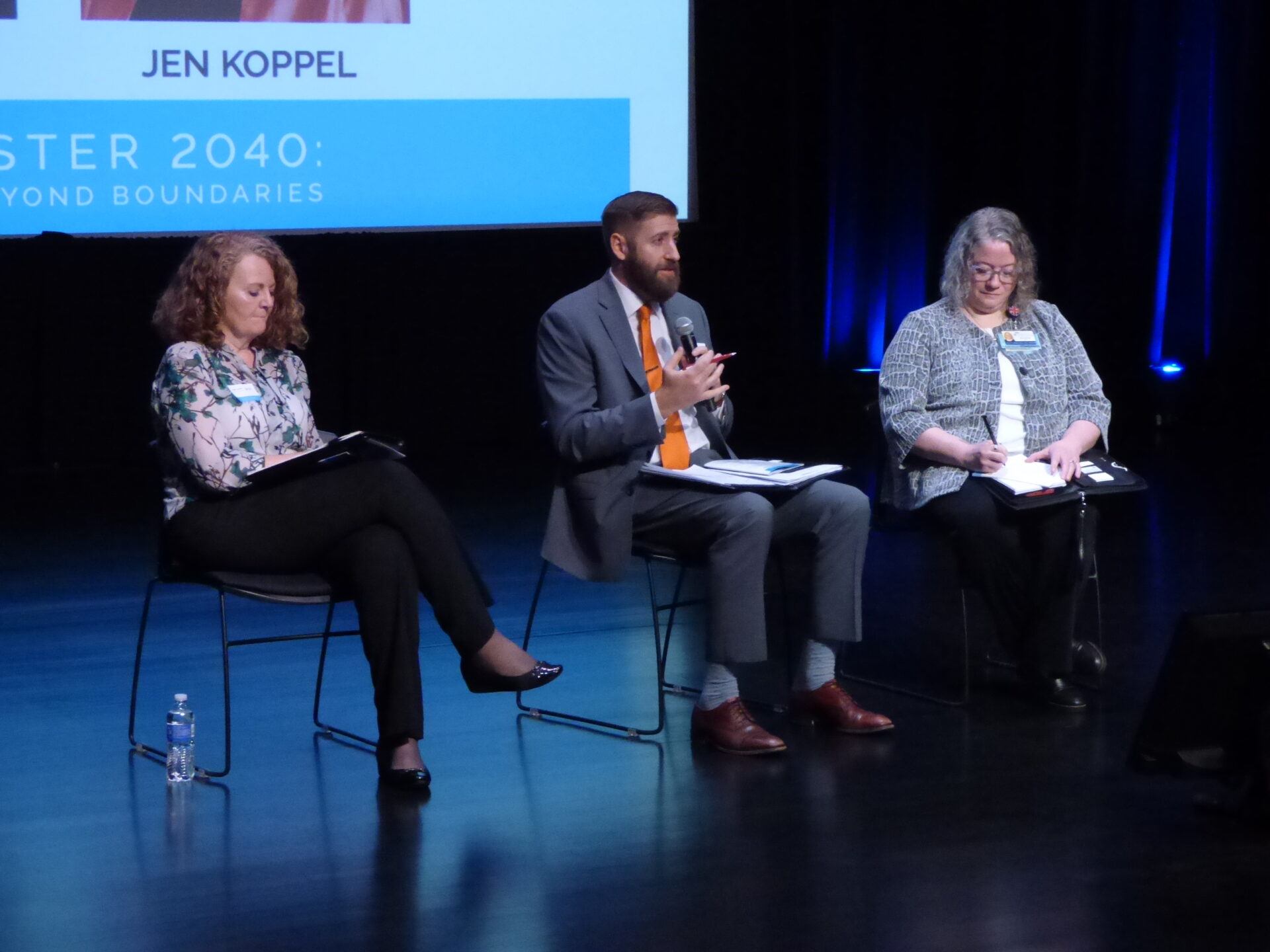 Surprisingly, given the consensus that Lancaster County has an affordable housing crisis, 2020 Census data indicates that the growth of housing units here exceeded population growth: 6.7% versus 6.5%. Panelists said they need to dig deeper into the details of those findings to figure out the implications.

Smart-growth advocates see building more housing where it already exists as essential to improving affordability and preserving Lancaster County's prized rural character. One of the biggest challenges, Druce said, is to build grassroots support among residents for the regulatory changes needed to make that happen.

That involves changing perceptions, forum participants agreed. People need to understand that affordable housing projects fit into neighborhoods like other developments, they said; and that their tenants are everyday people: senior citizens and "bus drivers and teachers and service workers." 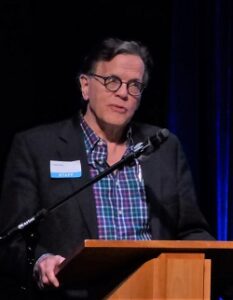 Give people plenty of ways to interact, and listen to what they say, said Bob Shenk, a Lancaster2040 co-chair, who moderated a panel on the Bridgeport Crossroads multi-municipal initiative: "You'll get a better outcome."

Similarly, a session featuring former state Sen. Gib Armstrong and former Lancaster Rick Gray called for reducing partisan divisions by fostering regular dialog across party lines and focusing on the greater good of the community as a whole.

When all is said and done, officials and politicians are accountable to their constituents, Druce said. When grassroots opinion supports smart-growth policies, officials have more leeway to approve it.

Multiple speakers urged their audience to get involved locally, noting that most people only turn up at public meetings when they oppose something. 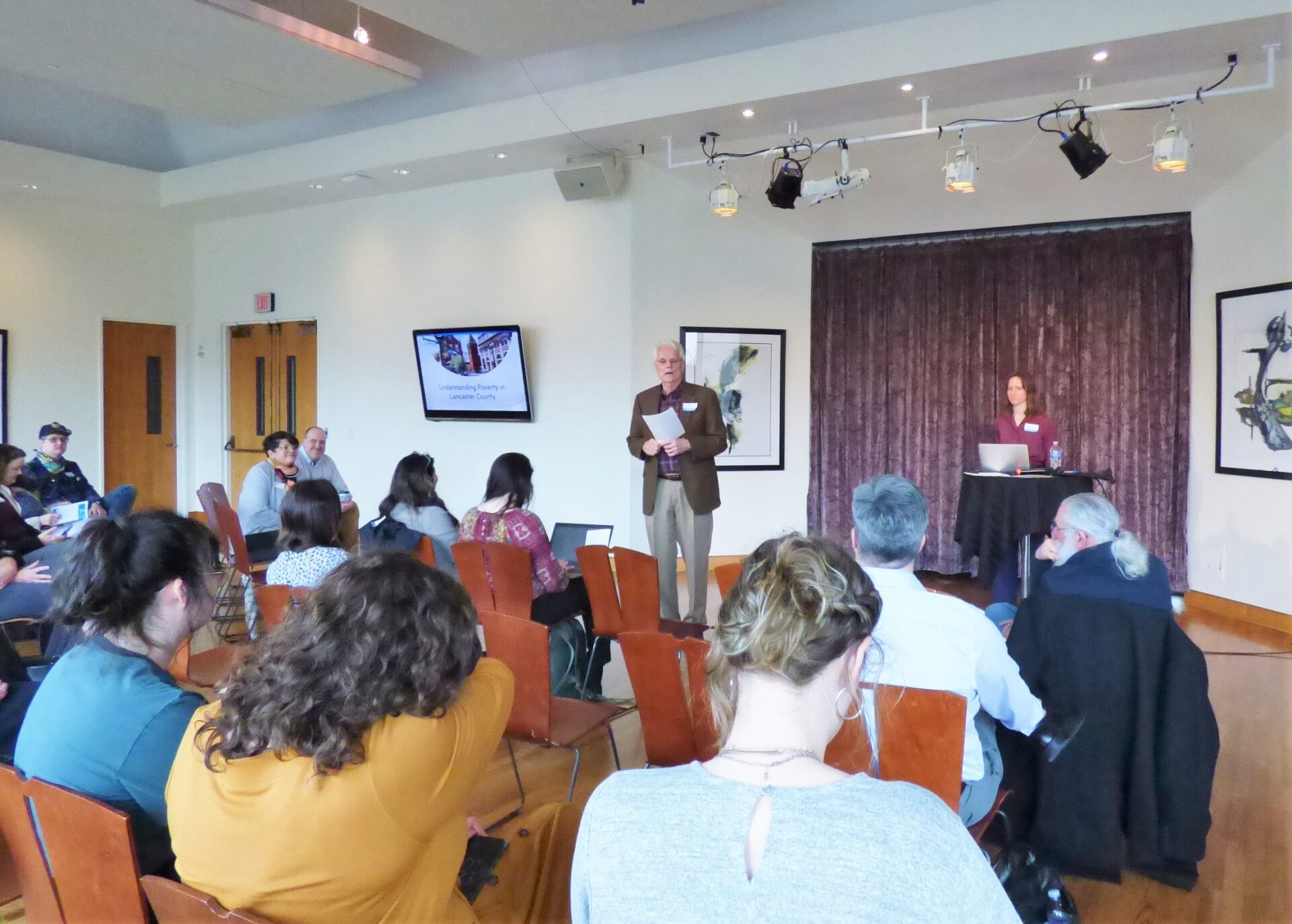 Bob Thomas, standing at center, and Rachel Luehm, at center-right, kick off a session on poverty impacts during Lancaster2040 at the Ware Center in Lancaster on Thursday, March 31, 2022. (Photo: Tim Stuhldreher)

Better planning and cooperation would have positive impacts well beyond housing and land use, panelists said.

Eric Sauder, director of the environmental consulting nonprofit RegenAll, challenged Lancaster County to become carbon-neutral by 2040. Not only would it show other areas how to lead on climate change, it would help local organizations and households wean themselves off the roughly $2 billion they now spend on fossil fuels each year. Millersville University is funding a grant program with the proceeds from the clean energy generated by its Lombardo Welcome Center, President Daniel Wubah said.

The Susquehanna National Heritage Area is working to create a unified tourist experience that spans Lancaster and York counties. It could generate an extra $100 million in visitor spending, President Mark Platts said. 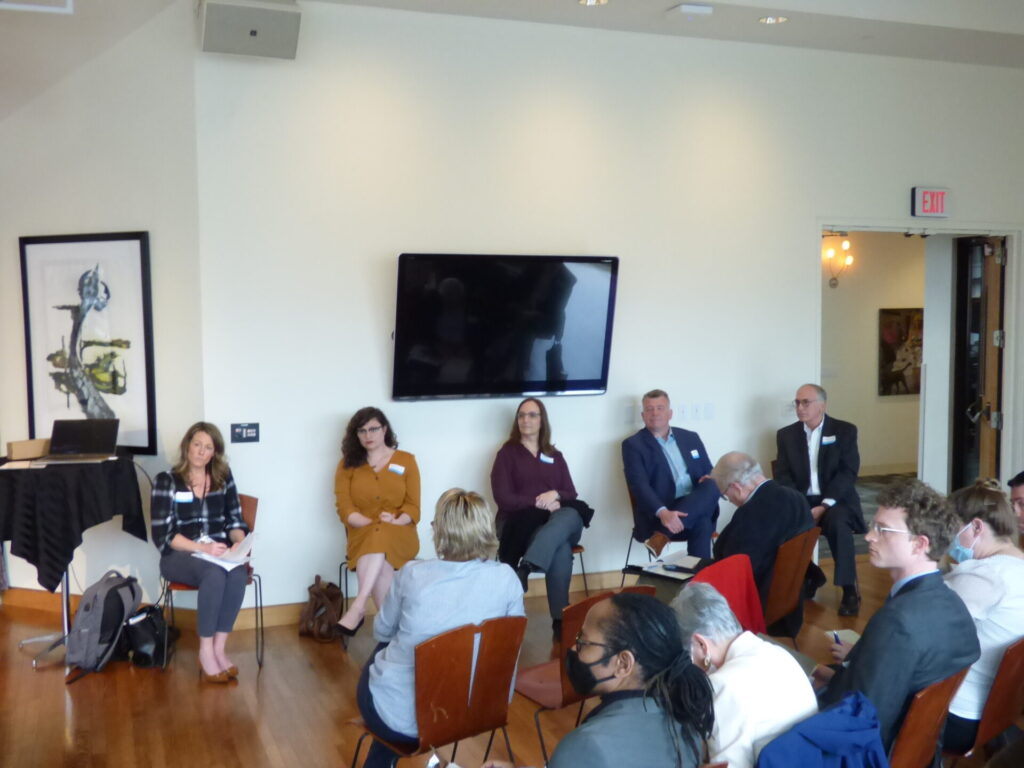 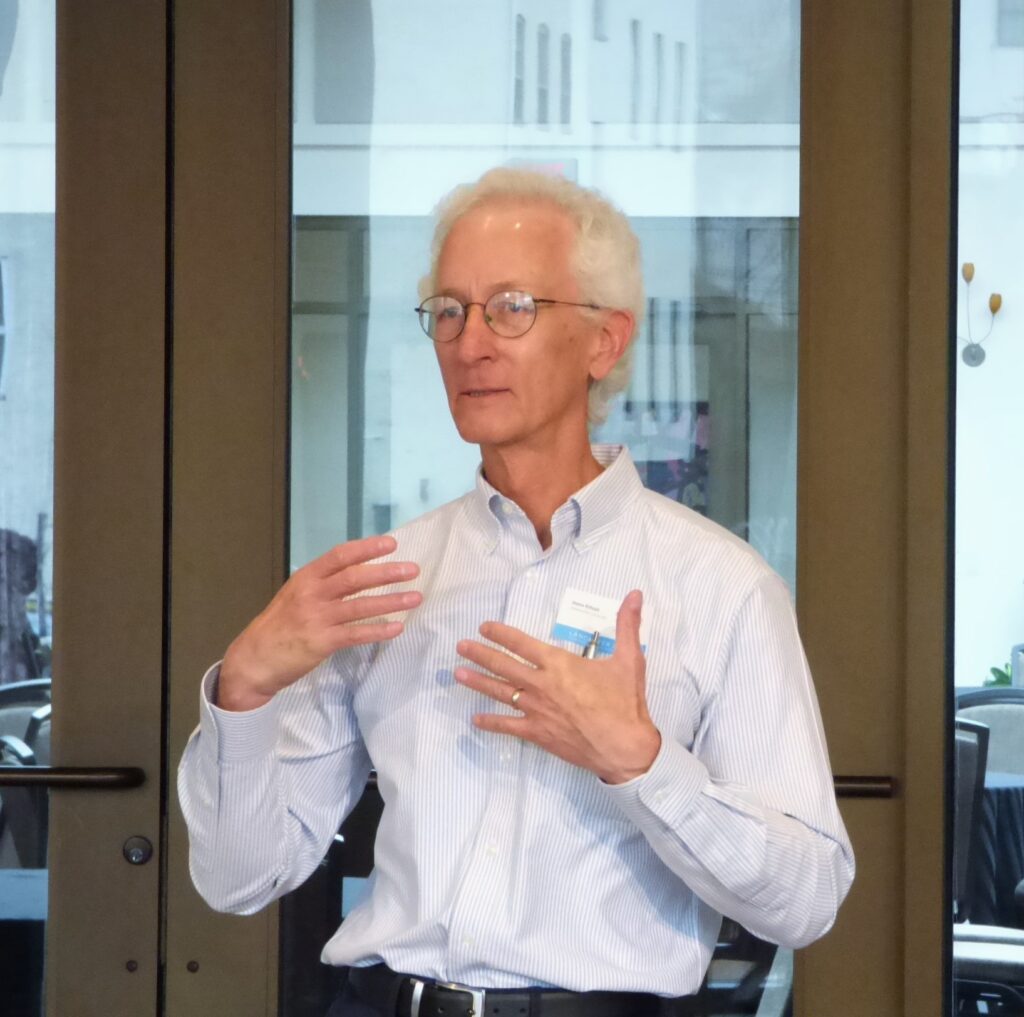 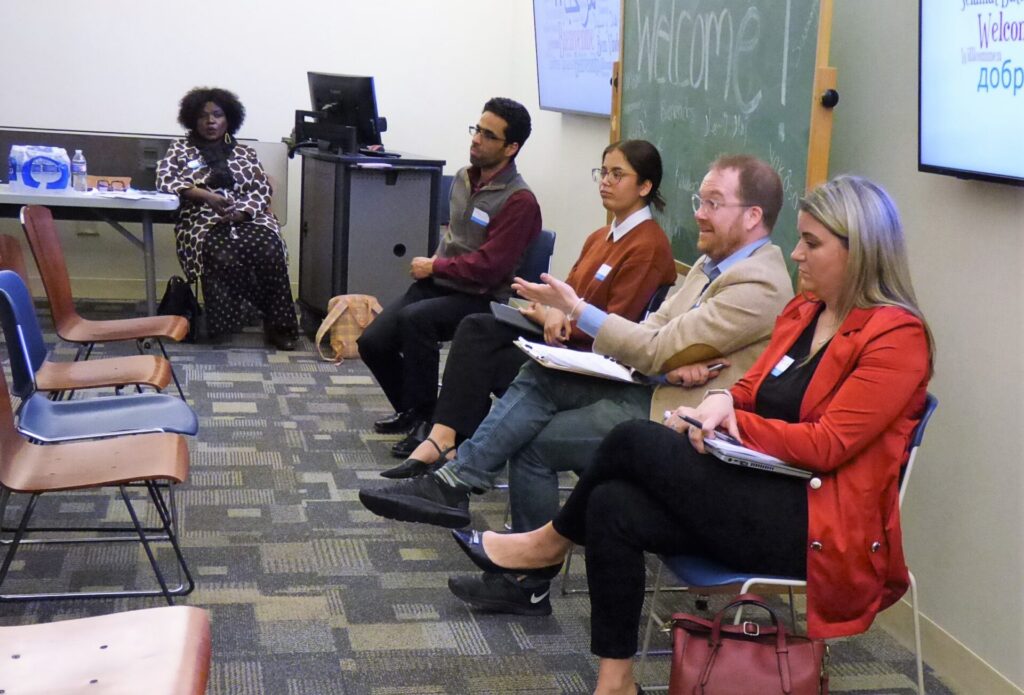 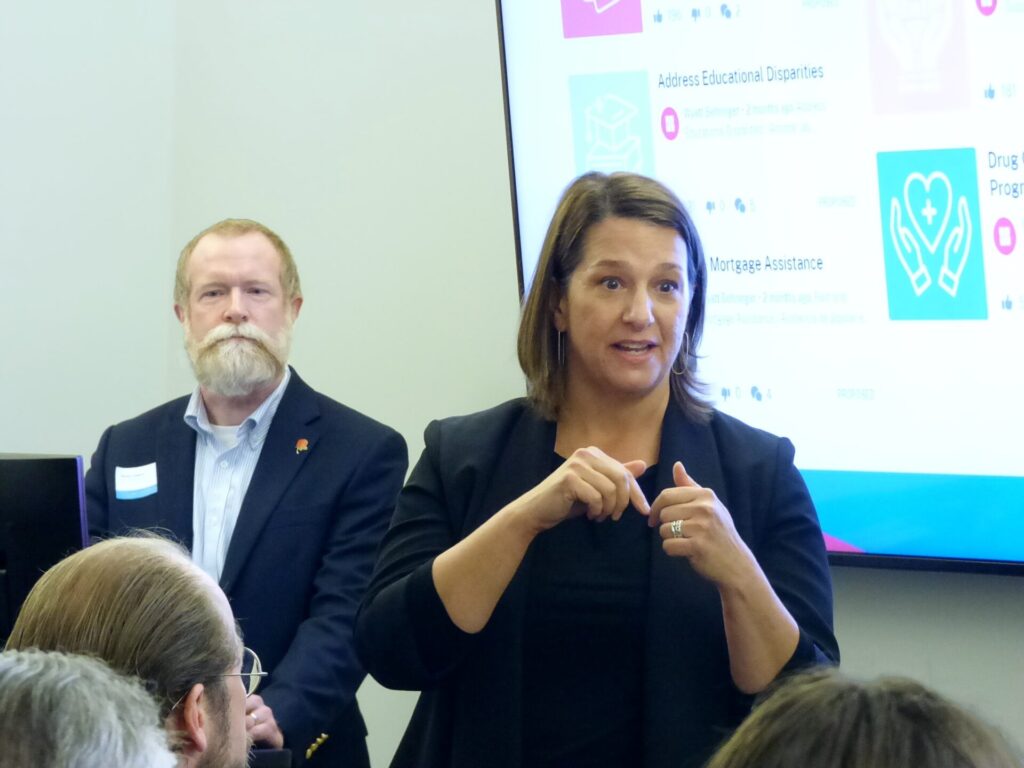 Lancaster city Chief of Staff Jess King, right, and Director of Administration Patrick Hopkins in a session on the American Rescue Plan Act. 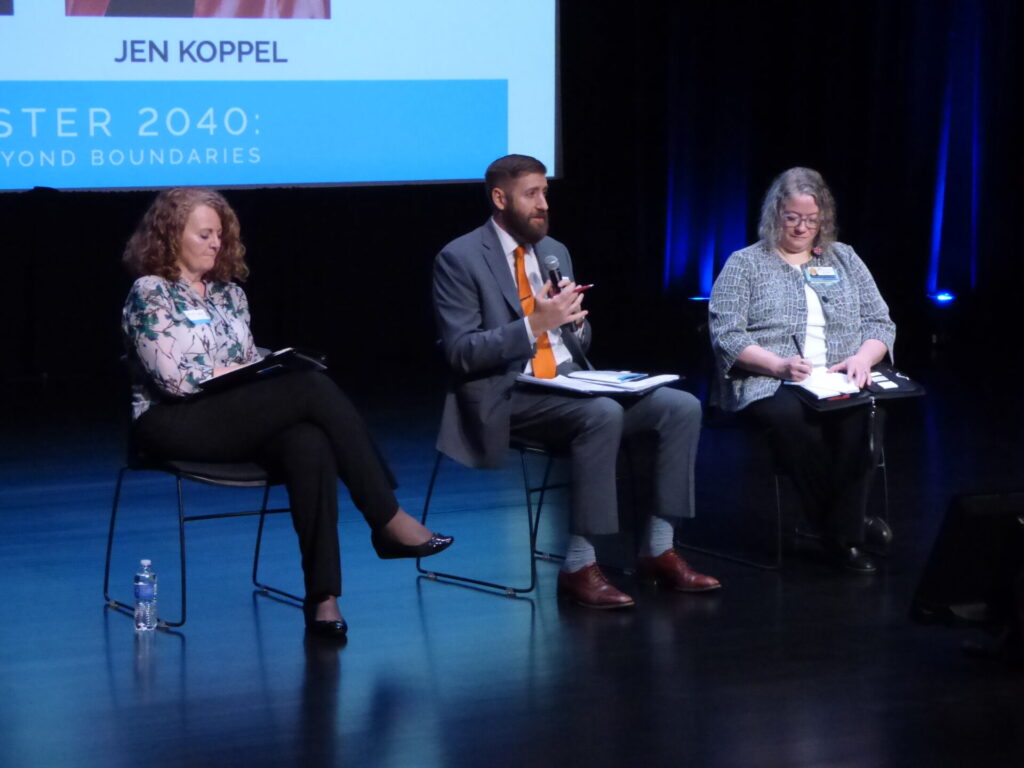 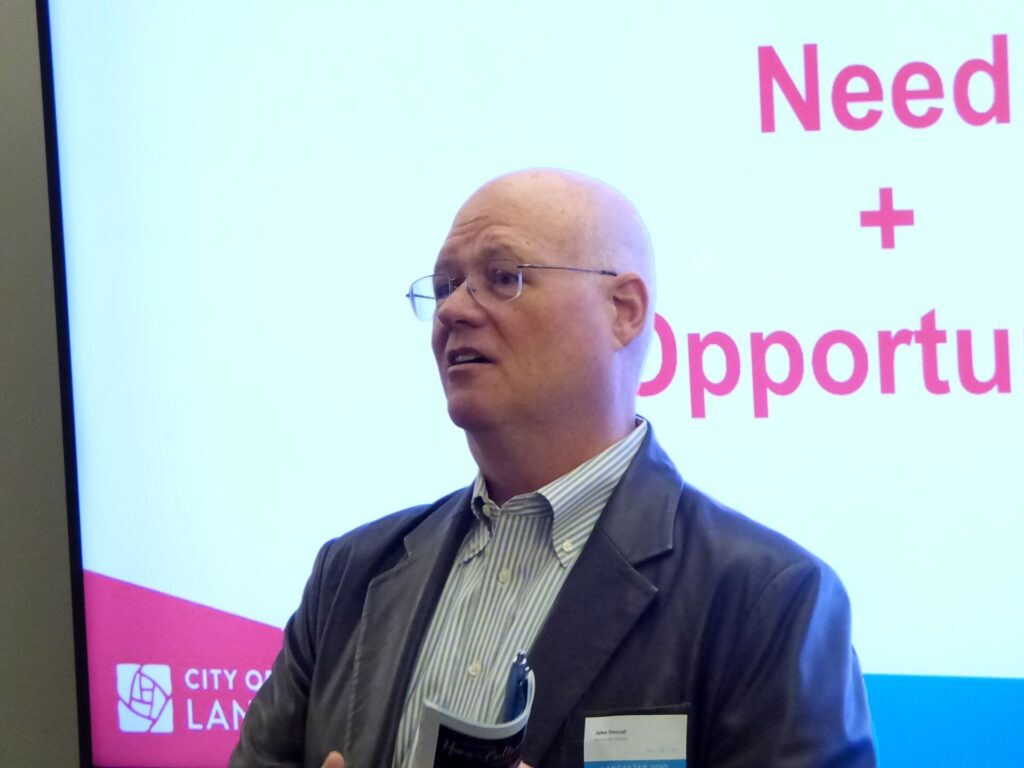