One for $241,600, will allow BHDS to underwrite two hours of therapy on behalf of individuals in crisis who lack any other means to pay, such as private insurance, Medicare or Medicaid.

The grant has been awarded, and is for one year, Deputy BHDS Director Julie Holtry said. The county is in the process of identifying four outpatient clinics to partner with, she said.

Appointments will be offered during business hours on weekdays, and should be available on a next-day basis, she said. If Crisis Intervention encounters a patient over the weekend who would be eligible, the appointment could be offered as early as Monday, she said.

The second grant, for $90,000, is for two years, and would fund a "warmline," Holtry and BHDS Executive Director Judith Erb said.

It would be staffed seven days a week by peer specialists from Recovery InSight. Operating hours are tentatively 2 to 10 p.m. Individuals who call in would be able to talk through whatever is bothering them, "so they don't feel so alone," Holtry said.

The term "warmline" differentiates the service from hotlines, which are geared toward emergencies and generally staffed 24/7.

The grant has not been awarded, but Lancaster County has been conditionally approved and is likely to get it, Holtry said. Assuming it does, the warmline would begin operating later this year or early in 2022. 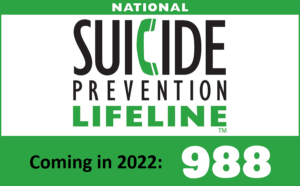 Meanwhile, BHDS is working with its state government counterparts and the National Suicide Prevention Lifeline to implement the 988 initiative, Erb said.
The Suicide Prevention Lifeline is a national network of suicide prevention centers, accessible by dialing the toll-free number 1 (800) 273-8255. As of July 2022, callers nationwide will instead be able to dial 988, an easier-to-remember number patterned after 911.

Currently, calls can be routed anywhere in the state: A call from Lancaster, for example, might be be answered in Pittsburgh or Bethlehem. The goal is to remedy that as part of the changeover, Erb said, so callers are directed to the resource closest to them.