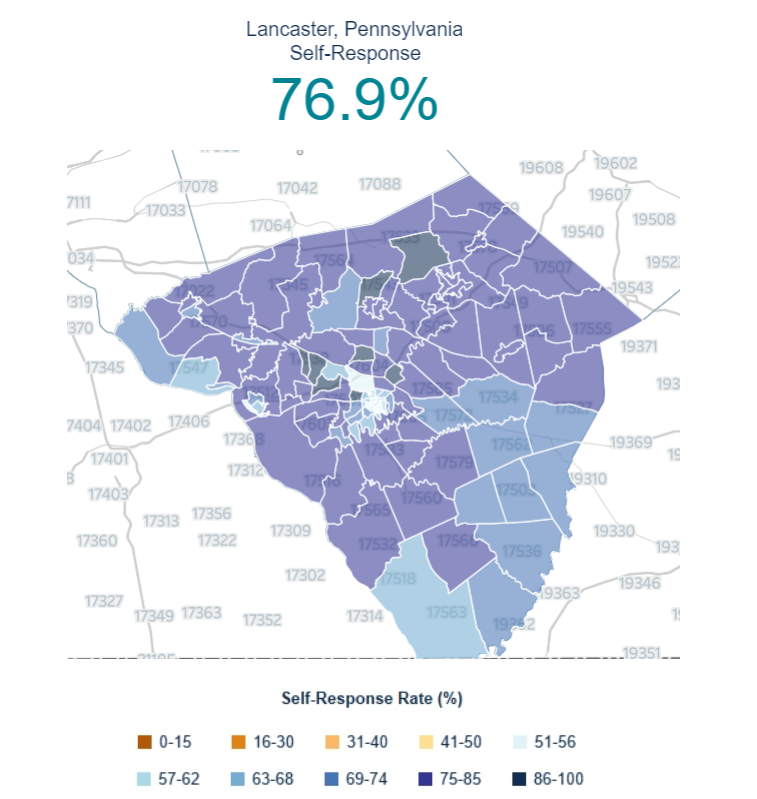 Only a few days remain until the Sept. 30 deadline for U.S. Census reporting, and Lancaster officials are sounding the alarm.

“We are in a state of emergency with this census, and we can’t express that enough,” said Milzy Carrasco, director of neighborhood engagement for Lancaster city.

All this month, enumerators will be going door-to-door, seeking responses from those who haven’t done so on their own.

Millions upon millions of dollars are at stake. With every person left uncounted, thousands of dollars get sucked away from repairing roads, funding schools or keeping Lancaster General Hospital up and running.

In fact, for every person who fails to complete the census, $2,000 less in annual federal funding comes to Lancaster County, or $20,000 per person over 10 years, said Kevin Ressler, CEO of the United Way of Lancaster County.

Countywide, 76.9% of individuals have filled out their census forms. While that’s among the best in the state, officials still want it to be as high as possible.

Moreover, some areas are underreporting. Lancaster city’s current response rate is about 10% below the final numbers from 2010. In the city’s southeast, the current rate is under 60%.

This year’s census was the first one offered online, in addition to the phone and paper options. Officials were then thrown a curve when the global coronavirus pandemic broke out.

All of this made the census’ partnerships with local organizations all the more important. Cue the nonprofit leaders of Lancaster.

The city of Lancaster formed a Census Complete Count Committee to work on shrinking the census response gap. It organized the census count into six subcommittees:

Within each of these, there were two leaders who helped organize outreach to county constituents through business and nonprofit events.

Juan Valencia, a partnerships specialist with the Lancaster office of the U.S Census Bureau, describes the United Way as “the chamber of commerce for the nonprofit world.”

Relying upon community relationships and resources, it identified groups that could help promote the census and led a 211 text message campaign instructing residents how to fill out the form.

Nonprofits working to bridge the gap

Other Lancaster nonprofits, too, went above and beyond the call of duty to try and close this year’s reporting gap.

Carrasco commended WLCH-FM, Lancaster city’s most popular Spanish radio station, for its radio announcements in Spanish encouraging people to fill out their census and telling them how to do so.

Other nonprofits supporting the Complete Count initiative include CASA in Action, an organization that works to support Latino and immigrant families along the mid-Atlantic; Church World Service (CWS), a faith-based organization committed to resettling immigrants; and the Boys and Girls Club of Lancaster.

CASA assisted the census office in knocking on doors and calling constituents. CWS created instructional videos in 16 languages to help people understand how to complete the census and the Boys and Girls Club hired community members to canvass neighborhoods door-to-door.

It is more important than ever for everyone to complete the census, Carrasco said.

By doing so, they are providing for “our most vulnerable, which are our youth, our children in the city,” she said, ensuring they receive full funding “to improve their education and their future.”

Valencia thinks one possible reason for lower response rates is immigrants’ fear that their answers to census questions about their legal status could be turned over to the U.S. Immigration and Customs Enforcement (ICE).

But Emma Hamme, a senior county planner who serves on the Census Complete Count Committee, emphasized that confidentiality is guaranteed. According to Title 13 of the U.S. Code, “confidentiality of individuality” is a mandate. The U.S. Census may only report statistics, like the age distribution of an area, not individual data.

To keep updated on the 2020 Census response in Lancaster, visit the Lancaster city planning website or the U.S. Census Bureau website to complete the census online.