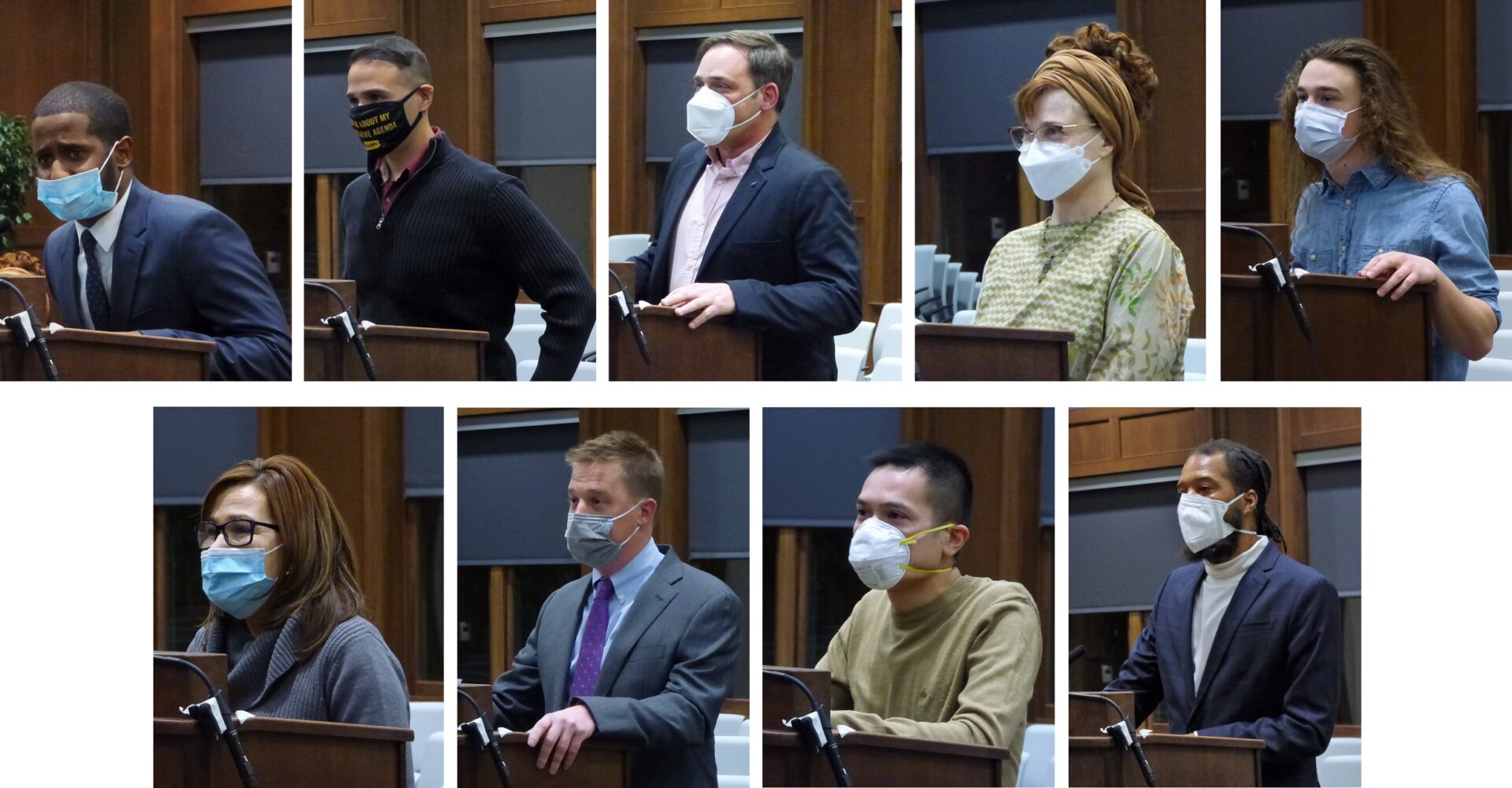 The first nine applicants for Lancaster City Council's open seat made their case Thursday evening to the six sitting council members they hope to join.

One by one, they stood at a podium, made opening statements, then fielded questions on the issues and challenges facing Lancaster, the experience they would bring to bear and what they love most about the city.

They are hoping to replace City Councilman Xavier Garcia-Molina, who stepped down after the Jan. 11 council meeting. Just before his departure, Garcia-Molina was appointed chair of council's Public Works Committee; his replacement would assume that role.

Eight more applicants are scheduled for interviews at 6 p.m. Tuesday, Feb. 1. City Council is planning to vote on Garcia-Molina's successor at its regular meeting at 6:30 p.m. Tuesday, Feb. 8. Both meetings are at City Hall, 120 N. Duke St., and will be livestreamed on the city's Facebook page and YouTube channel.

Born in a refugee camp, Ahmed arrived in Lancaster with his family in 1997. That background is what motivates his volunteer service and activism on behalf of the refugee community, promoting Lancaster as a welcoming place to all, he said.

In response to questions, he cited affordable housing as the city's greatest challenge: Lancaster can't continue to welcome new Americans if they can't afford rent here. The city's diversity, he said, is helping to drive its revitalization, while other small cities stagnate.

He advocated taking steps to mitigate house flipping and to make more efforts to extend downtown's economic development into neighborhoods, especially the southeast and southwest. He said the city should do more to combat homelessness and stop viewing it as a criminal matter.

Outlining his background as a community organizer and public policy advocate, Almodovar said he is passionate about working on behalf of marginalized communities: "Anything about them without them really isn't for them."

In response to questions, Almodovar said his top concerns are affordable housing and environmental sustainability; and that if the city administration proposed something that the community at large opposed, he would vote for the community's preference.

He said he has developed vast networks of contacts in the course of his career, noting he gained direct experience with individuals dealing with housing insecurity in three years of work at the Transitional Living Center; and that in Allentown he was part of advocacy work that led to that city banning gay conversion therapy.

Coon said he has adopted Lancaster as his home city since moving here a little over four years ago and wants to do anything he can to help the community. He said he believes strongly that change happens at the local level, and that his experience in the 2020 Neighborhood Leaders Academy taught him the importance of approaching public service with humility and being willing to listen and learn.

He said Lancaster's most significant challenge is overcoming disconnections and bringing together its many diverse communities; other concerns include homelessness and linguistic and other barriers to accessing public services.

He said he combines and outsider's perspective with an eagerness to learn and would bring a different perspective to council.

Craddock has been active for decades as a nurse, holistic healer and community health activist and said she has taken an interest in politics all her life.

She helped set up a health clinic in Haiti after the 2010 earthquake as well as an emergency care and midwifery training program. She is a founding member of Diversifying Doulas, and serves on the Lancaster LGBTQ+ Health Care Equity Coalition and a task force on sexual abuse in the Plain community.

Craddock said she would bring the perspective of the health care community to council. Asked about her main concerns, she pointed to the county's lack of a public health department; other concerns include lack of access to mental health care and the county's affordable housing and homelessness crises. She said her interest in clean water and clean energy would serve her well in heading the Public Works Committee.

Dastra ran for City Council in 2021 and said his interest in the seat now is a continuation of that effort. He said he is deeply concerned about the environment, education, health care, the breakdown of trust in government and the struggles so many people face to provide for themselves and their families.

He acknowledged that at age 22, he has limited life experience, but said he is invested in Lancaster and cares deeply about the city he taht is confident will be his home forever. He said the world has gone through one crisis after another during his lifetime and wants to see governments do much more to prepare, especially for the climate crisis.

He wholeheartedly endorsed diversity, saying it enhances sustainability and resilience in any domain: "Diversity makes us all stronger."

Elias said she looks forward to being able to use her skills as a social worker, her cultural background as a Panamanian and "everything I have" to help the city, saying being a council member would be an extension of the social services work she does already.

She said she is concerned about homelessness, housing, drug addiction and lack of access to services. She said her background would make her effective, and that being on City Council would afford greater opportunity to to address those problems.

Born in Laos, Hongvanthong owns and operates a photography studio and has called Lancaster city his home since 2008.

Hongvanthong said he would like to see Lancaster put the same effort into recruiting and retaining small mom-and-pop operations that it does with large employers. He said there is a lack of engagement with Lancaster's Asian community that as a City Council member he could begin to remedy.

He said he loves the resilience of Lancaster's families and business community and wants to give back to the community for supporting his passion for photography. He said the city's most significant challenge is its structural deficit: "It's the elephant in the room that no one is talking about."

Heinle, an orthopedic surgeon, was born and raised in Lancaster and returned here 7 1/2 years ago. Besides medicine, he has a background in economics. He serves on the boards of the Lancaster Public Library and Lancaster Assembly, volunteers at Water Street Mission and has taken part in medcal missions to Haiti.

His concerns include affordable housing, city finances, economic growth, the environment and education. He said he would bring a unique perspective to council, thanks to his medical and economics training and his time in other cities, where he saw "what has and hasn't worked."

He stressed his commitment to having an open door and taking constituent concerns to heart. He praised Lancaster's diversity as one of its strongest aspects, adding multiple cultural perspectives and offering greater opportunities for growth.

Lupton ran for City Council in 2017 but has refrained since then to focus on his media business. He said it felt like a missed opportunity not to run last year, so he was "ecstatic" when the opportunity to apply arose: "I feel as though it's the right time."

He said City Council appeals to him because it's the public-facing part of government, directly affecting people's lives. He acknowledged not having a background in public works but said he would speak with Garcia-Molina and department director Stephen Campbell to get up to speed.

He said he loves Lancaster's evolution since the 1990s: "It's kind of cool now to be from Lancaster. ... People that come from McCaskey, you feel and you hear that pride."

Asked what he considers Lancaster's most significant challenge, he cited access to opportunity, saying he struggled to find a well-paying job here despite having a master's degree. In Philadelphia, he said, he saw people being able to work their way up. City Council will need to have "tough conversations" with business owners to make sure opportunity is available here, he said.