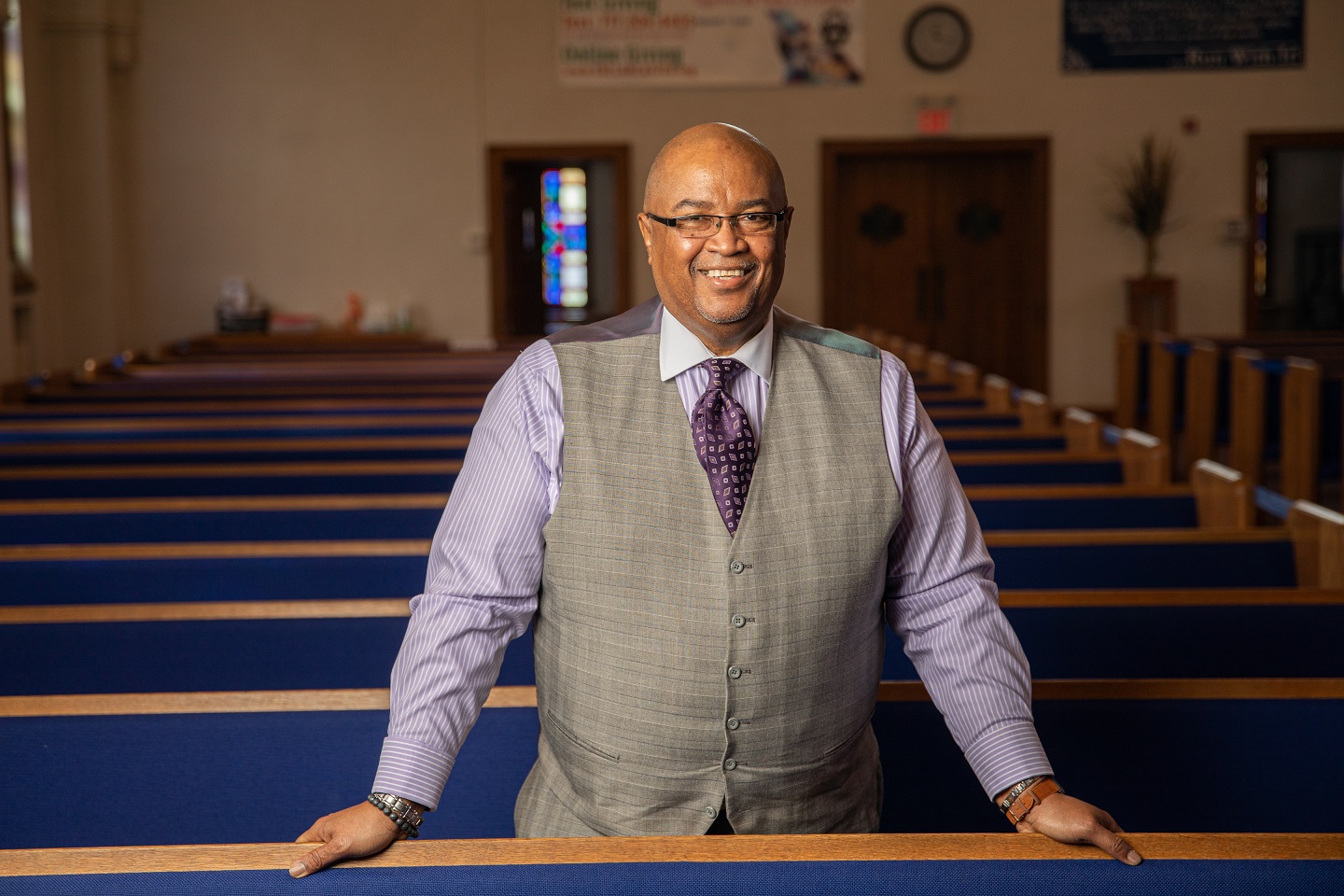 Growing up in the civil rights era of the 1960s, the Rev. Roland Forbes says he watched race relationships in America as they shifted and evolved.

Now 64, he remembers the hope and the frustration of those days, the progress, the setbacks and the turmoil.

He sees parallels with current events, and says he's optimistic about the potential for today's social justice protests to bring about meaningful change.

"I think society is now positioned at least to start the conversation on race, on poverty, on the issues that have meaning to the average person," he said.

Forbes was born in Norfolk, Virginia. His grandmother raised him for a while when his parents moved to Hartford, Connecticut, then he joined them once they established themselves.

He stayed in Hartford after high school, graduating from Trinity College and Hartford Seminary and beginning his career in ministry.

In 1990, he came to Lancaster to become pastor at Ebenezer Baptist Church. He and his wife, Sandra, have been here ever since.

Ebenezer Baptist Church is Lancaster County's oldest Black Baptist congregation and is deeply committed to community outreach. It offers multiple free meal programs, on its own and in cooperation with nearby nonprofits. Forbes likes to quote a former professor of his: "Ministry begins outside the walls of the church."

The church feeds hundreds of people every Thanksgiving, and every Christmas, it hosts a full-course dinner for children staying in homeless shelters, complete with a visit from Santa Claus and a gift giveaway. Last year it partnered with city police and firefighters to distribute Thanksgiving meals to homebound individuals. It hosts the Rebel Cause overnight homeless shelter on the lower level of its building at 701 N. Lime St.

A person can't help but be influenced by those who love God and are motivated to help others, Forbes said.

Forbes is a member of Lancaster city's Community Police Working Group, an initiative to improve trust and cooperation between law enforcement and the public.

One United Lancaster recently spoke with Forbes at his church office. This interview has been edited for length and clarity. 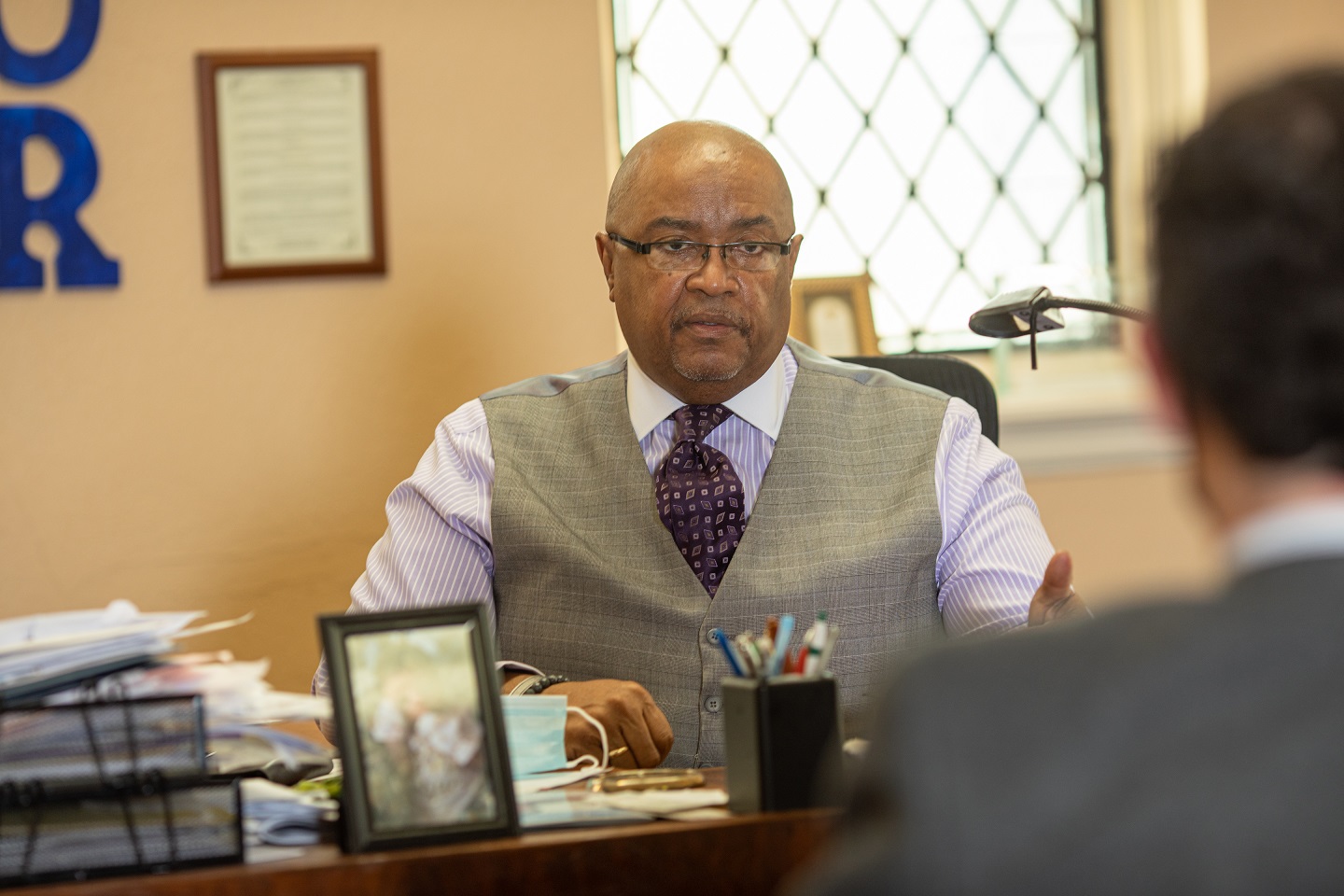 The Rev. Roland Forbes speaks during an interview at his office at Ebenezer Baptist Church in Lancaster on Friday, Feb. 5, 2021. (Photo: PhotOle Photography)

One United Lancaster: What drives you? At what point did you say, 'This is my life's work'?

Forbes: It's my calling, I guess. Maybe it's because of my grandmother that I developed a compassion for people. ...

She had rules. You never get too grown not to go to church. If you lived in her house, you had to go to church. She was compassionate, she took people in. That weighed heavy on me. That developed my life's work.

OUL: How would you compare and contrast the 1960s' social movements with today's?

The (Martin Luther) King era was one of nonviolent confrontation, which was powerful; but you also had, in the 1960s, those who said, "We're not going to take any more." There was an anger that grew out of that. People such as Huey Newton, Bobby Seale, the Weathermen, Abbie Hoffman. ...

OUL: Can you talk a little about the Community Police Working Group? How did it respond suring situations like the Ricardo Munoz shooting?

Forbes: I can recall that day clearly. ... People were angry. Part of their anger stemmed from social media and their understanding of the circumstances and the situation. There were all kinds of stories out there. ... 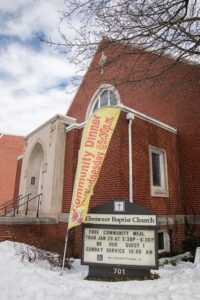 Our challenge was to try to bring some truth to the crowd. We were the recipients of anger. People thought we were on the side of the police, when all we wanted to do was to bring some truth and stop people from being arrested. Stop the violence, and also at the same time offer some comfort to the family.

We wanted to get involved. We wanted to help (the protesters) gather their thoughts and present their agenda, so we can all work together.

OUL: Going forward, what is the group hoping to accomplish?

Forbes: We want people to hold us accountable to our strategic plan. We want measurable goals. (For example), we want a police department that's reflective of the city of Lancaster and its minority makeup, its Black makeup. We're now working to help the mayor and the city find a new police chief.

I think in a year or two, you'll see measurable accomplishments, and we'll develop new goals out of that that we can work toward

OUL: Has the Black community in Lancaster changed during your time here?

Forbes: I think people are more involved now. Back then, there were groups like DADD (Demonstrate Against Drug Dealers), led by Calvin Duncan and others, guys like Chet Stewart. You had Nelson Polite. You had Ron Ford (a Ebenezer Baptist member), who became a county commissioner. We haven't had an African-American commissioner since.

I guess people thought that (level of engagement) would disappear, but I don't think that that's the truth. You're seeing people like (City Council President) Ismail Smith-Wade-El. You're watching Hispanic and African-American youth walking together, confronting issues. You have more young people involved, more voices involved. You have a generation that's willing to see it to the end.

OUL: Are there any trends in the current movement that concern you?

Forbes: I would caution the leaders of today to have a conversation with those they feel are antiquated, because there are some lessons all of us need to learn and share.

I think I shared this with a group during the George Floyd protest: There's a difference between a moment and a movement. Moments come up all the time. Movements are sustainable.

You can have these moments where anger arises. A movement builds with anger, and then seeks to change the results of the moment.

OUL: What do you like to do when you have free time?

Forbes: I love spending time with my family. I love traveling. You haven't had shrimp until you've had it in New Orleans. Chicago pizza. A hot dog in Detroit. Jamaican beef patties. ...

I love laughing. Because of the tragedies I work with, I find solace in stupid things. My favorite movie is "Coming to America." I can tell you every line. Stuff that makes you laugh, that will take your attention away from things that will cause you to cry.

Forbes: I'm grateful for the opportunities that are afforded me. I don't consider myself to be special in any sense. But being able to write articles or op-eds, be able to talk on TV, be able to meet in the halls of justice, I'm very appreciative of that. I've been blessed to do that.