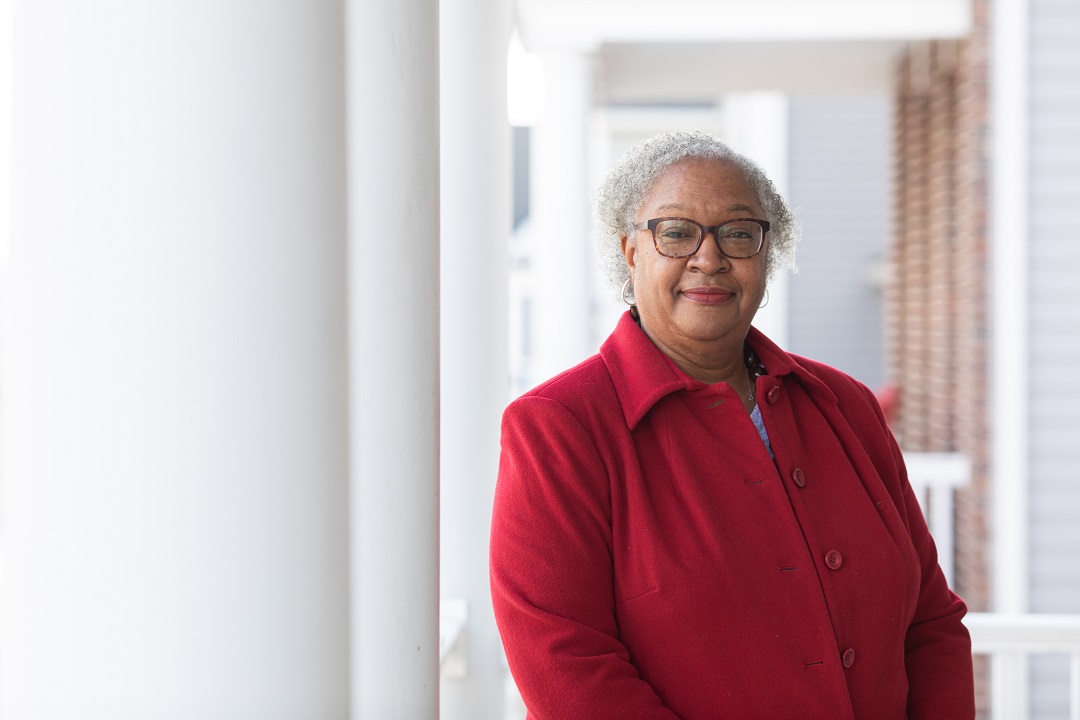 Born and raised in Dauphin County, Deborah Wilson Gadsden has worked in child welfare for nearly half a century. In December, she became the first Black woman to chair the YWCA Lancaster board of directors.

When granted the opportunity to chat with her, I began by asking what her greatest passion was, personally as well as professionally. The short answer: working toward race equity.

But Gadsden's path to getting there was not a direct one, nor where she saw herself heading as a young girl.

“I had my son at 15, but my mother being an educator, there was no question about finishing school or moving forward,” she said. “I just had to do it in a different way.”

This meant entering the field of child welfare at 17, right out of high school. Gadsden went on to work her way through college. She received an associate’s degree from HACC, and later earned two master’s degrees.

Early in her career as a licensed social worker, Gadsden realized there were few case workers of color in her field, even though Black and Brown families were disproportionately represented in child welfare.

“I always felt there was a need to champion for families of color. When I have had a family of color assigned to me, I’ve really tried to do right by them, because I know they’ve been mistreated prior to my becoming involved with them,” she said.

“Among the first of my cases was a direct, outspoken woman of color. None of the white case workers wanted to take the case due to her aggressiveness, so she was assigned to me. Her first words were, ‘Finally, a Black worker,’ and I thought ‘Ok, I’m here for a purpose. I’m here for a reason.’”

Deborah was able to assist the client and her family with a number of pressing issues that included addiction, homelessness, prostitution, health issues and getting much-needed support for her children.

“We found resources for her kids. She went to a long-term drug treatment facility for eight months, but unfortunately once she was released, she came back to the city and overdosed. Her children were in a place with people they knew, so despite the tragedy, they were in a good place.”

I asked Gadsden if she considered this to be her epiphany moment, the one that made her realize she needed to get involved in the push toward racial equity.

“My epiphany moment to be doing this work came after working with the mother and her children,” she said, “but the opportunity to do so didn’t present itself until much later. I’ve been on that journey ever since.

"I was also a trainer and consultant through the University of Clemson around school bullying prevention, so I’ve worked with a number of schools and individuals around that. I’m also trained in workplace bullying. Bullying behavior is wrapped up in that need to oppress and subjugate someone for your own interests, so there are ties between those two things.”

In 1990, she moved from Harrisburg to Lancaster.

“As a person of color, coming to Lancaster from Harrisburg was a bit of a shock for me,” Gadsden said. When she first started working for her agency, “There were only three people of color serving the whole of Lancaster County. My work with that first mother and her children got me wondering why there weren’t more people of color working in this field, with the families that most often needed help from these agencies.”

Gadsden’s work as a caseworker led to her being a caseworker supervisor with the Statewide Adoption & Permanency Network in 2000. In 2008, she became a training specialist involved in creating and delivering curriculum and training staff to become trainers — work she has continued to do for the past dozen years or so for the Child Welfare Resource Center’s annual Diversity Task Force event.

Gadsden joined the YWCA board in 2014. She felt one purpose was to be a champion for equity in work that was already being done, to give it a face and a voice. When the YWCA approached her about training, she accepted. 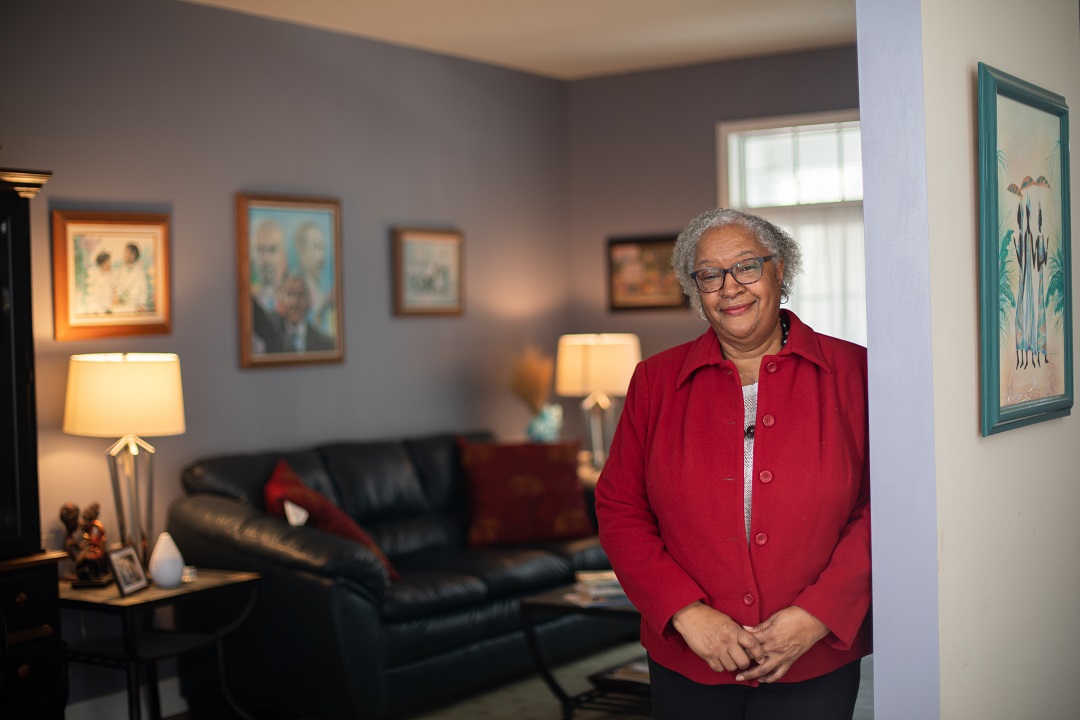 Deborah Gadsden is seen in the living room of her Mount Joy home. She and her husband, Nathan, have a blended family that includes five children, 12 grandchildren and one great-grandchild. (Photo: PhotOle Photography)

In 2016, as Gadsden was approaching retirement, a member of the Pennsylvania Office of Children, Youth & Families (now the Bureau of Child & Family Services), “asked to tap into my knowledge and expertise and asked me to do a keynote for the state on a topic I really had a passion about. Disproportionality in the system was my passion: What can we do about it? Why weren’t we addressing it? Why wasn’t the state working on it? Why don’t more people know about it?

"So, in January of 2017, I did a keynote for the Statewide Adoption & Permanency Network, which I had started working for in 2000.”

Following the keynote opportunity, she worked with some of her colleagues and presented a number of trainings for companies statewide on these topics. In 2019, she worked with a team of 22 individuals, all of whom had trained future individuals in race equity work through Cultural Bridges to Justice.

The original trainings started as 45-minute sessions, but due to the high volume of interest Gadsden was asked to do a longer session. She spent this past summer working on a six-hour version and traveling across the state to deliver it to different areas, with the help of a team of seven trainers. People have wanted still more, and this has led to the in-process development of a six-part series on various issues, taken from the six-hour training, and all with a vision of related work for Lancaster County.

“We knew we needed to provide this same information to the Lancaster community," Gadsden said. "We now have the Racial Equity Institute available to businesses and individuals, and I’m working part-time doing these sessions between the other things I do.

“I’ve come to believe that work in child welfare has been a calling all my life, and that’s why I’ve been able to have the longevity in it that I’ve had. It’s usually unheard of to find that someone’s worked in this field for nearly 50 years, but with different changes and responsibilities, I’ve been able to maintain this focus. It’s been a very satisfying journey.”

I asked Gadsden what Black History Month means to her.

“I am a child of the 1960’s and 1970’s," she said, "having been born in 1955. When I was coming up, as a person of color, I was mostly invisible to mainstream America. Because I was raised in a middle-class household, I had many more privileges than my peers, but I was still Black.

"I lived through the eras of the Black Panther movement and the rise of the Black Muslims. There was always a struggle to be seen, to be appreciated and to matter. So, I remember the onset of Black History Week. It was a week that Whites believed they sacrificed for us and for our voices to be heard.

“But my mother was an educator and she taught us our history every day. We were exposed to the accomplishments of people of color historically and in the moment. I vividly remember, when a Black person would come on television on one of the three channels available to watch (ABC, NBC, and CBS) there was a call throughout the house to come and watch. We counted the number of times we could watch others who looked like us — Sidney Poitier, Diahann Carroll, Leslie Uggams and only a handful of others. The airing of "Roots" was major television for us in the late 1970’s.

“Then Black History Week was turned into Black History Month and by then I was resentful that I only mattered one month out of the entire year. But from a generational viewpoint we learned to be grateful for any airing of who we are and how we helped to shape American life. We had to fight to be portrayed in positive ways.

"The truth be told, people of color have contributed more than can ever be expressed, for many of the inventions and innovations we created were stolen from us and the credit given to Whites. The stories were hidden and not made a part of the history books. America was built on the backs of slaves and other oppressed groups. Yet, you had to take a Black studies class in college to learn those things.

“So, today my opinion of Black History Month is that if the white supremacy culture would just see people of color as fully human, full citizens, and full partners in American life, there would be no need for Black History Month. We would celebrate the contributions of all people all the time and it would be reflected in the history being taught to children from day one. The true history, not the whitewashing of events to provide salve to Whites suffering from White guilt and shame. It is time to get beyond those things and dismantle the smoke and mirrors and shaded renditions of the truth.”

In parting, I told Gadsden that she seemed to be still very much in the thick of her mission and asked what her plans were going forward.

“I’m of retirement age,” she said, “but have no plans for it, because I’m enjoying the work and it’s very necessary. So, I’ll just keep going.”

Heather Hutsell
Administrative Assistant at United Way of Lancaster County
Heather E. Hutsell began writing stories at age eleven. Her first—a murder mystery—won her an award through the Young Authors program, as did two more detective mysteries in as many years. Already set on becoming an author, she published her first novella, Awakening Alice—a sequel to Lewis Carroll’s Alice in Wonderland—in the collaborative work Ghost on the Highway, in 2006. She went on to self-publish an illustrated version of Awakening Alice along with its sequel, A Ticket for Patience in 2007. Heather has since written and self-published eleven more novels, two novellas, and four short story collections. Her works include romantic horror, absurdist fiction, dystopian tales, dark comedy, and a Steampunk mystery series. She has also written two historical documentary series for Lionheart Filmworks. Her blog and more information about her work can be found at www.heatherehutsell.com.