Housing shortfalls by state as of 2019 (Source: Up for Growth) 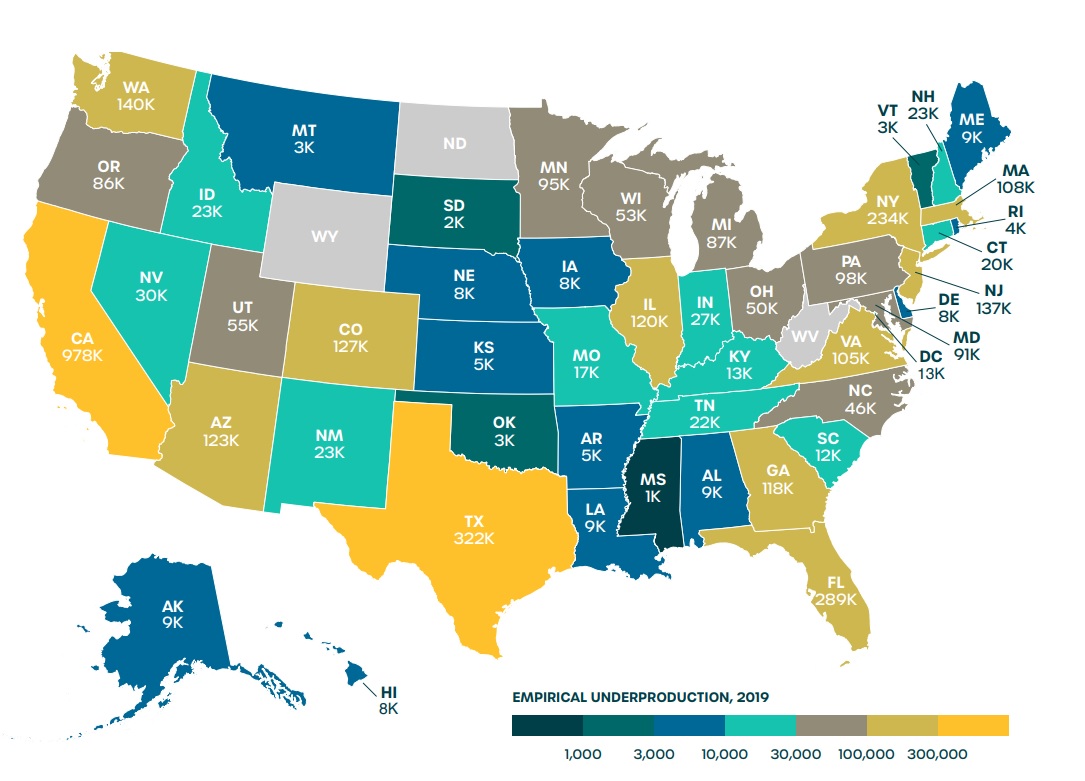 Lancaster County is more than 8,200 housing units short of the inventory it needs for its growing population, according to a new report on the U.S. housing supply by the advocacy group Up for Growth.

Those missing houses amount to 3.9% of the county’s housing stock, Up for Growth calculates. As a raw number, that puts Lancaster County at No. 61 out of 169 metro areas ranked by their housing shortfalls. (The remaining metro areas still have balanced housing markets or a surplus.)

A U.S. Department of Housing & Urban Development study cited by local advocates suggests the county needs to build 1,150 affordable housing units a year, or 18,500 units over 16 years, to meet demand.

Up for Growth’s report is titled “Housing Underproduction in the U.S. 2022.” The country’s underperformance has reached “an extreme state,” it says, with the overall shortage increasing from 1.65 units in 2012 to 3.79 million units in 2019.

Unsurprisingly, Up for Growth found the largest shortfalls in the largest metro areas, led by Los Angeles-Long Beach-Anaheim, with 388,874 fewer units than it needs, or 8.3% of its housing stock. It’s followed by the New York and Miami conurbations.

As a percentage, Lancaster County’s 3.9% shortfall is middle-of-the-pack, in a range that goes from as high as 11.5% in Gainesville, Georgia, to as low as 0.1% in several metro areas, including State College.

Sky-high housing costs have long been a feature of the U.S.’ world-class cities, but shortages and price spirals are spreading rapidly, Up for Growth says. Numerous metro areas that had a surplus of units a decade ago now have deficits.

In an article spotlighting Up for Growth’s research, the New York Times attributes the shortage to a complex interplay of factors, including employment losses in the construction industry during the Great Recession that were never made up, land and materials prices, tighter lending criteria and burdensome, exclusionary local zoning regulations.

Housing shortages exacerbate economic and racial inequity, homelessness, environmental degradation and the stress on government budgets, Up for Growth says. In Lancaster County, it has led to a roughly 20% rise in property value from 2012 to 2019 and to 45.7% of county renters being cost-burdened, paying more than 30% of their gross income on rent.

Changing course “is central to resolving the most urgent and important social economic and environmental issues of our time,” Up for Growth says.

It proposes what it calls “a better foundation,” an approach that would moderately increase housing density in “high-opportunity neighborhoods.”

“[W]e can choose to adopt a new approach to building homes that addresses not only availability and affordability, but also has positive impacts on equity and inclusion, economic vibrancy, and climate change,” it said.