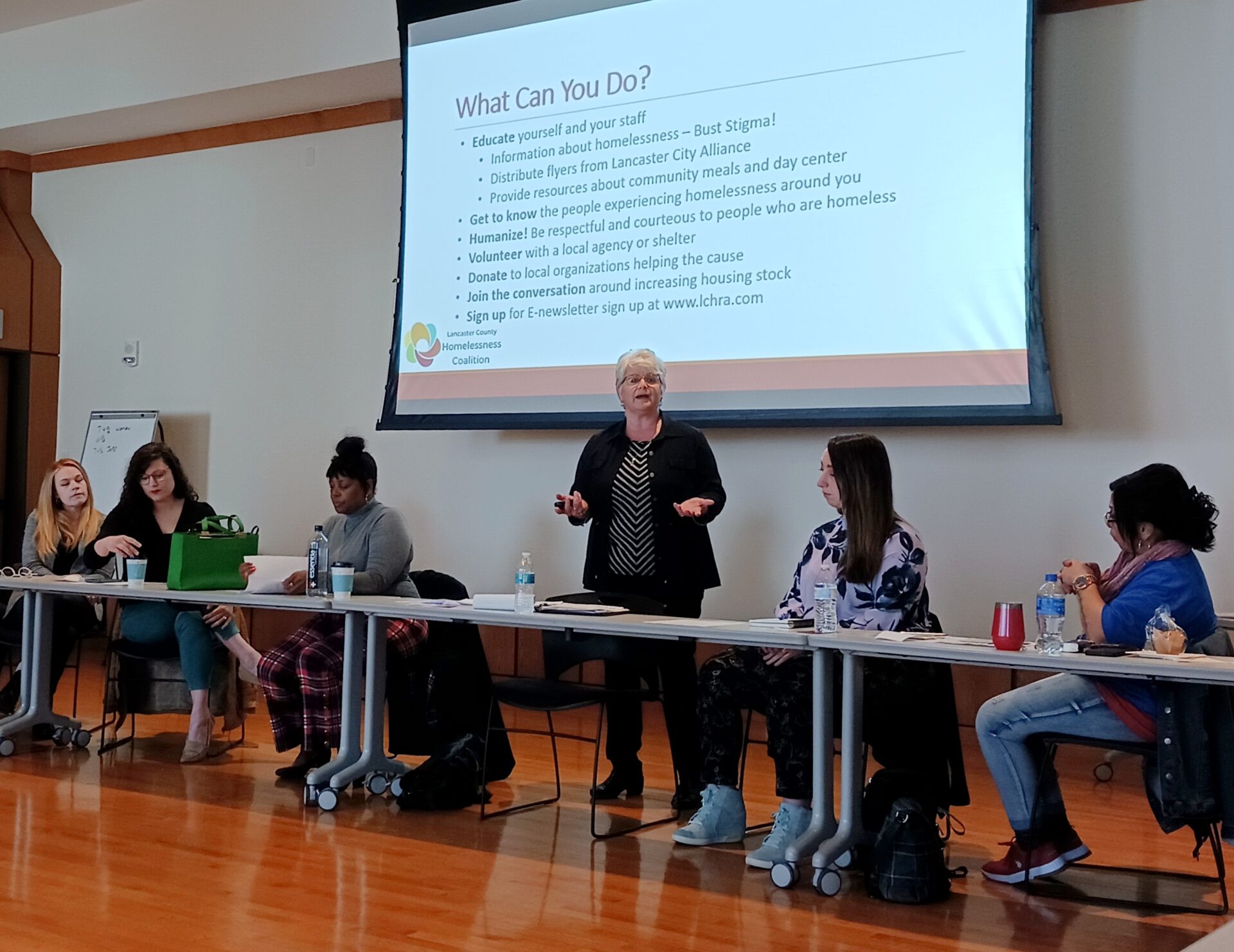 Lancaster County reduced its homeless population by half between 2007 and 2017, according to its annual point-in-time census, or "PIT count."

But since then, the numbers have rebounded, eliminating about half of that reduction.

Each year, organizations serving the homeless throughout the U.S. take stock of local conditions by conducting a PIT count, a census of everyone who is in an emergency shelter, transitional housing or is unsheltered altogether.

This year's took place Feb. 23. Starting before daybreak, volunteers fanned out to conduct the tally. The result: 472 individuals, up 5.6% from last year.

Staff at the county homelessness coalition say they want to make sure they don't rise any further.

The programs offered by the coalition's member organizations "are essential to keeping that number where it is," said Ismail Smith-Wade-El, the homeless coalition's data analyst. (Smith-Wade-El is also Lancaster City Council president and a Democratic candidate for the state House.) 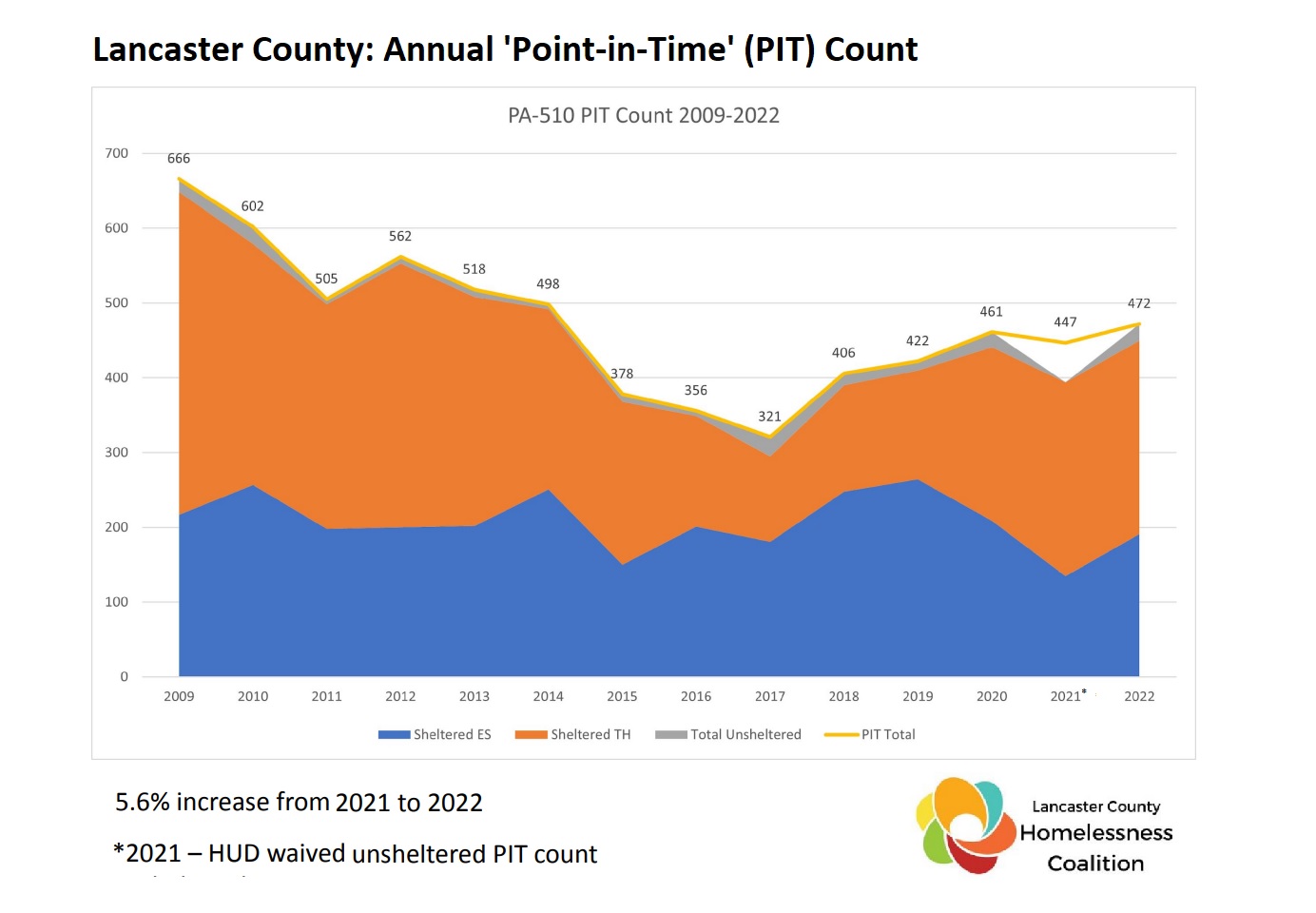 Trends in Lancaster County's Point-in-Time count. Click to enlarge. NOTE: Initially, a transitional housing facility was inadvertently omitted in the 2021 count. The count was subsequently revised to include it, raising the total from 394 to 447. (Source: Lancaster County Homelessness Coalition)

The majority (55%) of the people identified in the PIT count were in transitional housing, and just over 190, or 40%, were in emergency shelters. The remaining 23 individuals, or 5%, were unsheltered.

That's normal, Smith-Wade-El said. The unsheltered count varies the most from year to year, from less than a dozen to more than two dozen depending on weather conditions and the like.

In 2021, the unsheltered component of the count was waived due to the pandemic. Given the variability of that number in past years, the coalition chose not to make an estimate.

In 2020, advocates feared the pandemic's economic shutdowns would lead to a wave of evictions and homelessness would soar. Large-scale federal programs, including enhanced unemployment and the Emergency Rental Assistance Program, or ERAP, appear to have been effective in preventing that outcome over the past two years.

However, enhanced unemployment has ended and ERAP is winding down, and low-income renters are facing a daunting landscape with soaring rents and very few vacancies.

At a presentation at the Lancaster City Alliance's downtown merchants meeting last month, Jones and others working on homelessness locally said the county is a leader in some of its approaches. But they also pointed to the area's ongoing affordable housing crisis as a major cause for concern. 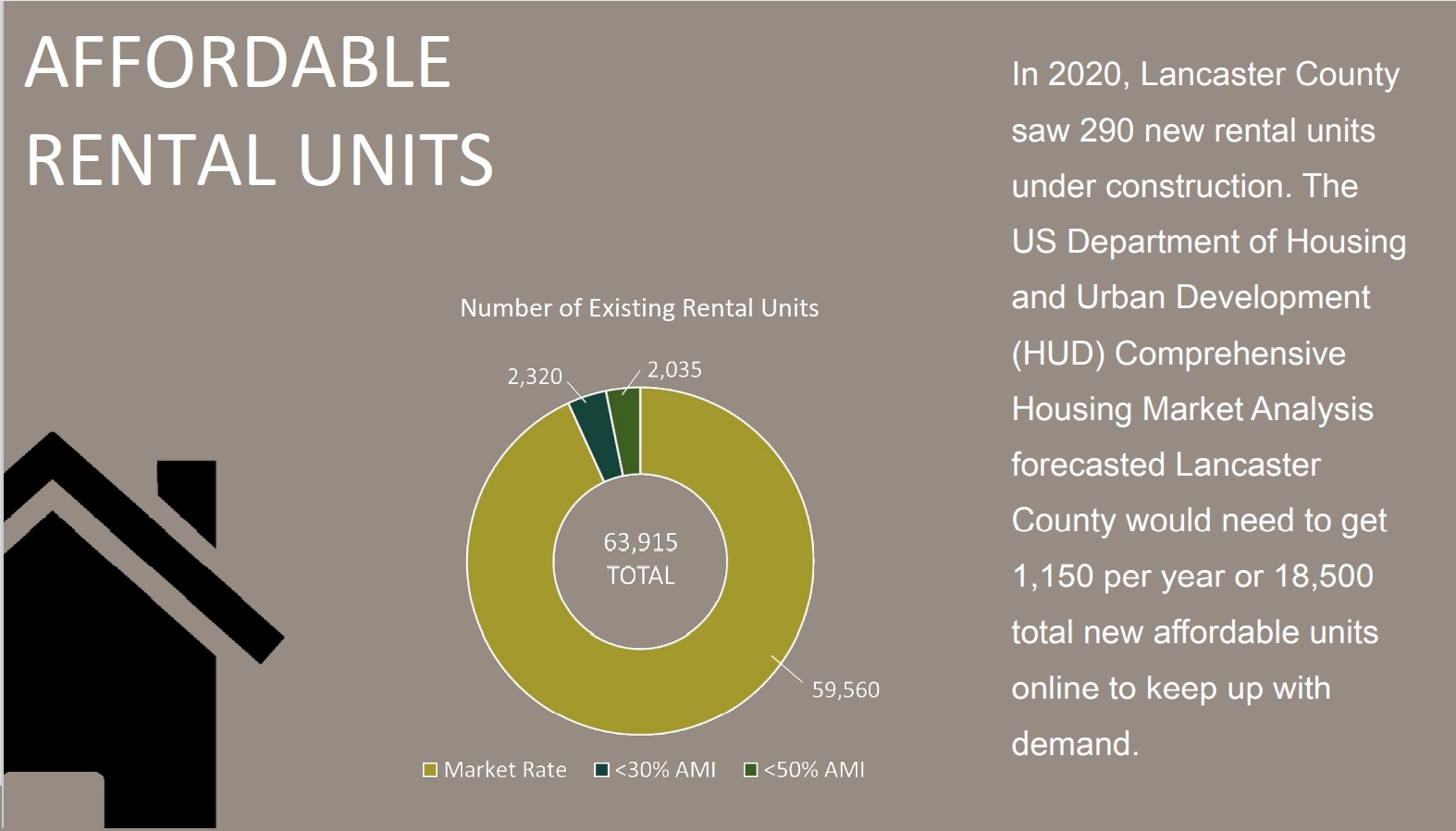 An "affordable" unit is defined based on income levels: A household making 50% of local median income ($41,500 for a family of four) or 80% ($66,400) should pay no more than 30% of its monthly gross income on housing. Lancaster County's affordable housing deficit is split about 50-50 between the 50% and 80% area median income levels.

Officials are hopeful that an influx of federal relief funding in the wake of the pandemic will help reduce the shortfall, filling the gap between the cost of construction of affordable rental properties and the income stream they produce.

In the meantime, they're pushing ahead with other initiatives, including subsidized repair programs for rentals and partnerships with developers to include dedicated affordable units in their projects.