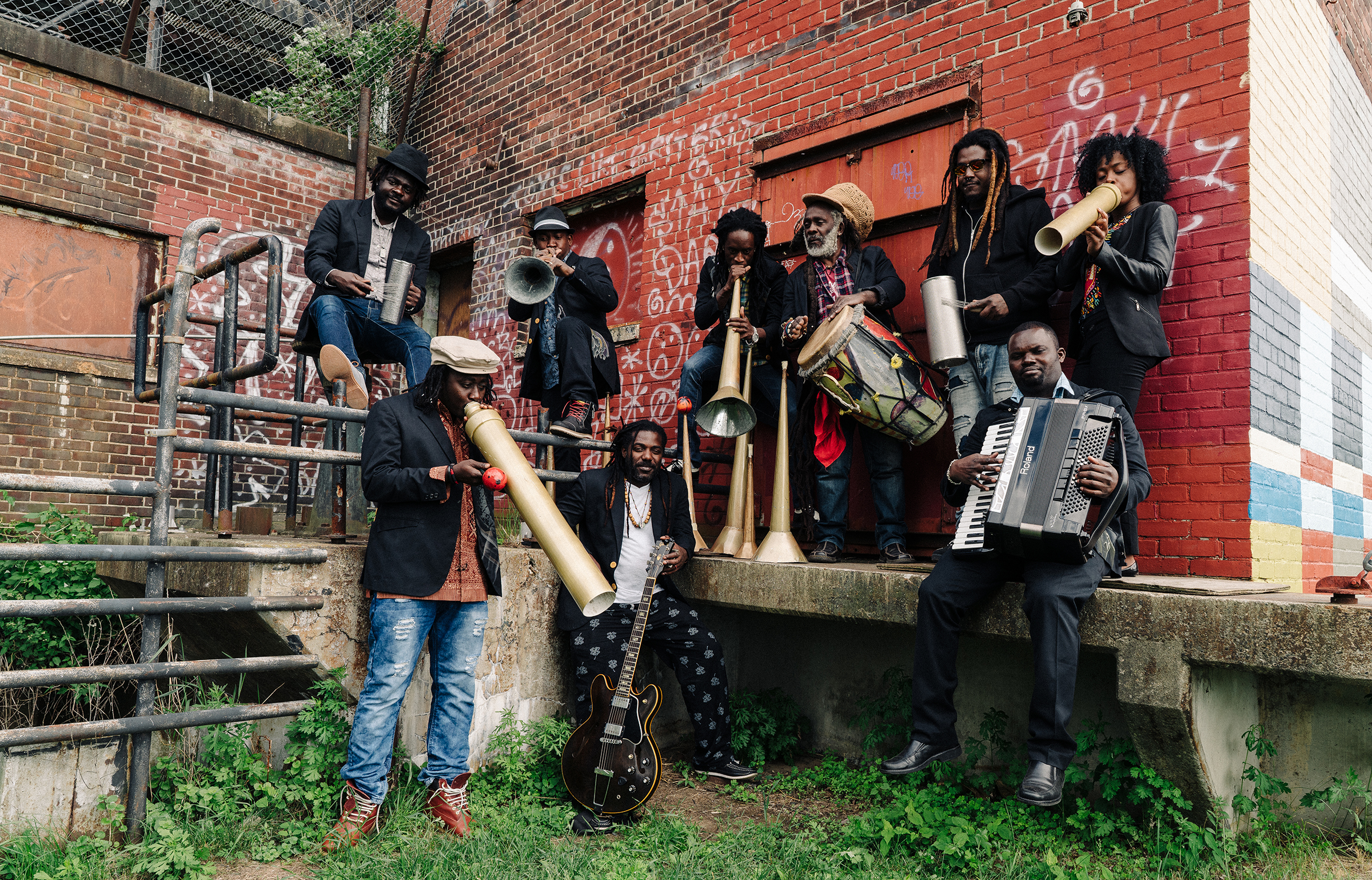 (Editor’s Note: This article on the band Lakou Mizik’s upcoming visit to Lancaster was written for One United Lancaster by Herve Dorsainvil, a Haitian-born journalist and communications professional who lives in Lancaster. Click here to read Dorsainvil’s article in Haitian creole.)

The band Lakou Mizik promises to introduce Lancaster to the richness of Haitian culture in all its forms during its artistic residency here next week.

Lakou Mizik will be in Lancaster from Sunday, June 12, to Saturday, June 18. The band will offer musical performances infused with the culture, roots, and identity of the Haitian people.

Lakou Mizik is a “multigenerational collective” of musicians who came together in the aftermath of the country’s devastating 2010 earthquake. Its members will play the role of ambassadors of the Haitian culture through various activities, including workshops on drumming techniques, dance and the rhythms of traditional Haitian music.

The band’s visit will culminate with a performance Friday in Binns Park in downtown Lancaster in honor of Immigrant Heritage Month in June and World Refugee Day on June 20.

Sponsors and hosts of the residency include Church World Service Lancaster, Music for Everyone, WXPN, the Lancaster County Community Foundation, Eastern Mennonite Missions and the city of Lancaster.

• Monday, June 13, 6:30-8:30: “A Night of Music, Food & Conversation with Lancaster’s Haitian Community,” at Hub450, 450 N. Prince St., Lancaster. The free event is open to the Haitian community and allies; it will be conducted in Kreyol (Haitian creole) with English headphone interpretation.

• Wednesday, June 15, 10-10:45 a.m. and 2-2:45 p.m.: Drum workshops, offered as part of the Arts Smarts Camp at the Ware Center, 42 N. Prince St., Lancaster. The weeklong camp sessions are for children from kindergarten through 5th grade; for more information or to register, visit artsmu.com.

Lancaster and southcentral Pennsylvania are home to thousands of Haitian-Americans. Matt Johnson, strategic community partnerships officer with Church World Service, said this week of cultural exchange and celebration aims to connect the Haitian community to its roots, to recognize Haiti’s cultural richness and heritage here in Lancaster, and to express solidarity with Haitian immigrants here and throughout the United States.

For at least five years, Church World Service has been organizing cultural festivals to celebrate immigrants from all over. Johnson said he is pushing to have the Haitian flag raised outside City Hall for Haitian Flag Day, May 18, beginning next year.

City Councilman Lochard Calixte, who took office in January, is Lancaster’s first Haitian-born council member. He said he is thrilled that Lakou Mizik will be here and is confident the week’s events will open the door to more effective communication and collaboration with the local Haitian community.

Meanwhile, the Lakou Mizik musicians, who are on tour in the United States, can’t wait to come to the city with their Legba-loaded jackets full of beautiful music and songs.

Steeve Valcourt, the band’s maestro, guitarist, and singer, along with fellow musician Sanba Zao, a member of the band, and a teacher at the National School of Arts in the Haitian capital, Port-au-Prince (ENARTS), expressed their pride and excitement at soon being in Lancaster.

Zao said he is working on formalizing the Haitian drum techniques, in writing solfeggio. He says he will unreservedly share the rhythmic riches of playing Haitian drums with the workshop participants.

Zao cites rhythms such as Ibo, Nago, Petwo, Yanvalou and more that will be on the menu. According to the ENARTS instructor, this approach will open the understanding of his fellow drummers in America to the Haitian musical language.

Valcourt and Zao said Lakou Mizik will convey a message of love to Haiti and to the Haitian community in Central Pennsylvania through a mix of traditional and popular Haitian song forms.

Songs will be selected from their first album titled “Wa di yo” ( You Will Tell Them), and from the album “Haitian No La.” The “Haitian No La” album is the result, according to Valcourt, of a cultural blend of Haiti, New Orleans, and Savannah. It is an album of cultural mixing that connects Haiti and the United States. The artists believe that this alliance will please the public.

Lakou Mizik aims to convey the Haitian concept of Lakou, which pertains to the idea of ​​unity, brotherhood, and unity in the Haitian community.

This week of activities dedicated to the Haitian heritage in central Pennsylvania will provide an opportunity for conversation to spread about Haiti’s culture and traditions. Audiences will have the opportunity to learn much about Haiti through its music, songs, and dances. It will be an occasion to get acquainted with the rich Haitian Creole cuisine as well.

As Dr. Jean Price-Mars stated, Haitians are a people who sing and laugh, despite misery and sorrow. The reality of Lakou through music, audience, food, and mutual respect is what defines the Haitian people. Lakou Mizik will bring the Haitian music to “Lakou” Lancaster for the pleasure of the ears, heart, and soul.

All Haitians are invited to attend these “Sware Plim Poul” (birds feather nights: nights of pleasure). For friends of cultural diversity, too, this is an opportunity not to be missed.