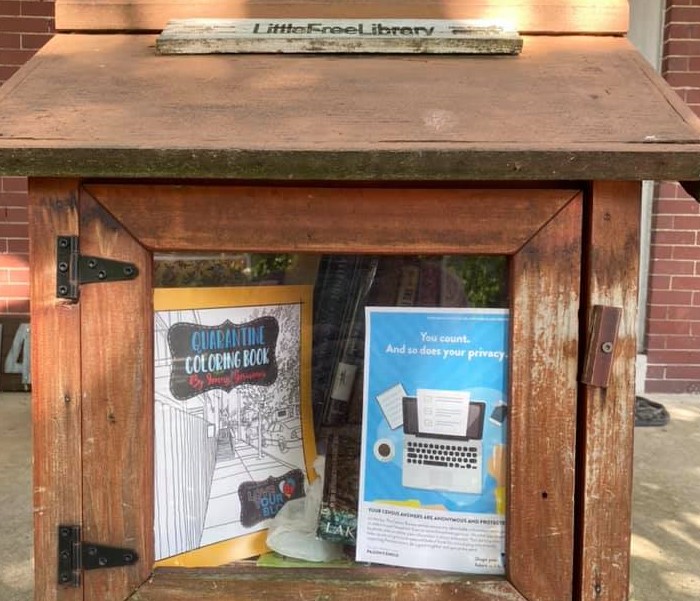 Jenny Germann's city-centric coloring books were just one of the Love Your Block funded projects this spring. (Source: Jenny Germann)

If the pandemic has proved anything about people, it is the familiar adage “necessity is the mother of invention.”

Lancaster experienced this creative spirit in the spring projects of Love Your Block program, a grant-funded Lancaster City program.

Jenny Germann, a woodburning artist and executive director of the Manheim Township Educational Foundation, used some of her time this spring creating coloring books.

The project began with Germann posting drawings of her daughter on her Facebook page. When the drawings began picking up traction with her followers, she put out a call to the community to send her pictures from their own lives.

The unexpectedly positive response sparked an idea to incorporate the drawings into something more concrete. Soon after, she heard that Love Your Block was accepting applications for alternative grant proposals and decided to apply.

Love Your Block’s past

Love Your Block has been funding neighborhood beautification projects since 2018, utilizing volunteer labor and community ideas on how to improve neighborhood blocks of the city.

Pre-pandemic, community projects were proposed by the neighborhoods themselves. Requests to install public trash cans, repaint facades and plant window boxes were often included in grant proposals. Once approved, the winning neighborhood groups performed the beautification work themselves.

“Residents have the opportunity to take ownership and leadership in their neighborhoods,” said Christian Cassidy-Amstutz, one of the 2019-2020 AmeriCorps Volunteers In Service To America (VISTA) in charge of Love Your Block.

The coronavirus shutdown necessitated that Love Your Block operations innovate. Unable to do group service work, Cassidy-Amstutz and fellow VISTA Renee Addleman shifted their focus to individual projects like Germann’s.

“Our basic need to help and connect with one another really came out during Covid,” said Milzy Carrasco, the director of engagement for the city of Lancaster and Love Your Block’s program supervisor. 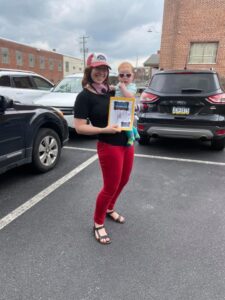 Germann and her daughter, Til. (Source: Jenny Germann)

Germann redrew photos submitted by Lancaster residents as black and white coloring pages and posted them to Facebook. With Love Your Block funding, the pages were printed and bound into 150 coloring books, bagged with coloring supplies and placed in Little Free Libraries across Lancaster City.

Besides creating the pages for her own enjoyment, and to physically distribute across the city, Germann is also an advocate for “making sure art is accessible for all.” Accordingly, the pages are available as a free digital download on her website.

Germann said seeing the blank pictures of her coloring pages completely colored in is one of her favorite parts of this project. Seeing photos of other people making the pages their own and sparking good conversation was special, she said.

Germann’s grant joined a collection of others awarded to efforts invested in improving the lives of others nearby, such as:

Love Your Block was initially funded through a $25,000 “Cities of Service” grant from Bloomberg Philanthropies.

The grant was used for two years of community projects across the city, primarily helping to improve the look and pride of blocks. All of the projects were proposed by neighborhood residents, guaranteeing that the proposed work was what they wanted for themselves.

Love Your Block was such a success in Lancaster that when the $25,000 ran out and 2020 began, the High Foundation, a philanthropic nonprofit organization in Lancaster, contributed additional funds to keep the program going.

“We saw early returns and found a highly valuable opportunity for us to continue our initiatives in support of neighborhoods in Lancaster City, especially in these difficult and challenging times,” said Robin Stauffer, the foundation’s executive director.

The program continues into the next calendar year with proposals being accepted and under review now for 2021, said Cassidy-Amstutz. Fundraising has already begun to provide for future grants.

According to Carrasco, the city remains enthusiastic about supporting “community-led initiatives,” and she looks forward to the coming year’s projects.

Check out Love Your Block’s webpage for pictures of past projects and more information about grant proposals.

Olivia Smucker
Olivia Smucker is a staff writer for OneUnitedLancaster. Previously, she was the arts editor at Goshen College's "The Record" and reported for Mennonite Creation Care Network.