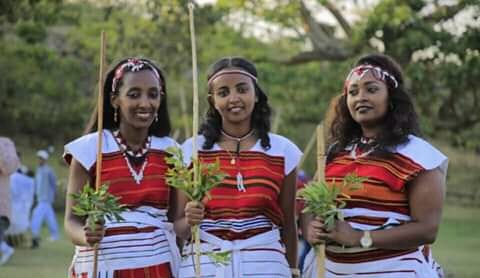 (Editor's Note: This story and its companion piece were researched and written by high school student Gifti Galdi as part of the second session of the Refugee Youth Journalism Project.)

“I told them, it’s time for me to take charge,” Iftu Gemeda said.

Iftu has served her church in Lancaster for decades. She is Oromo: An indigenous ethnic group native to Oromia, the largest region in Ethiopia.

Related: Oromo female identity: From homebound tradition to a 'mini-revolution'

Iftu (the name is a pseudonym to protect her identity) saw that few Oromo women were exerting power in the church realm. Questions were never raised, because of the unspoken ground rules passed from Oromia to the United States, keeping women from having positions of power.

Taking charge meant deciding to make a change in the church by planting a women’s group that has served the church for many years in upholding voices for women, hosting events, and bringing them together. She believes, “Women are no longer held back from achieving their greatest potential.”

According to EthnoMed, in the early 1980s to 1990s, thousands of Oromo people relocated to the North American continent, with the largest number in Seattle.

I, myself am Oromo, born in the United States to immigrant parents. My Oromo heritage is quite important to me and I take pride in the indigenous traditions passed down for years. In being a second-generation immigrant, I’ve learned to fluently read, write, and speak in my language.

My love for the community has led me to take on roles of preparing and teaching Bible lessons to the children in the Oromo church, in both English and Afaan Oromo.

Traditional Oromo society is “patriarchal,” according to sociology professor Kuwee Kumsa. As the number of Oromo women in positions of social power in the US increases, however, the traditional gender dynamics of the culture have started to change in the face of that new reality.

As those immigrants assimilate, many strict traditions have gone by the wayside. In rural parts of Oromia, girls get married around age 15, and “blind” arranged marriages are common. In North America, those marriages would be illegal in some states and provinces. Accordingly, women are marrying later and blind marriages have practically died off.

The emphasis on virginity as the key symbol of virtue and the key contribution of women in Oromo culture has diminished, as young Oromo girls attend college, find work and live more independent lives.

But old habits die hard, and according to many sources, the surveillance instinct is alive and well. Parents still keep close tabs on their girl children, as I witnessed in a friend, who was preparing to go out with a few friends when her mother asked if any guys were to be there. Her dad then had to remind the mom that they should be able to trust their daughter’s whereabouts.

Parents insist their motivation has changed. Strict rules regarding curfew, location, and the company of children still exist, but parents say it’s about keeping their children both male and female safe in a vastly different culture than they grew up in.

This is evidenced in my life by persistent texts from my mom, including “where are u” and “wil u get home before dark?”

Women’s growing influence in the church

According to Refworld the dominant religious traditions in Oromia are Islam (55%), Christianity (40%), and close to 15% practicing other religions. The region of Wollega, where most Oromo people in Lancaster emigrated from, is majority Christian.

Oromo women are the backbone of the church. They prepare the communal meal of daboo (a type of bread) and coffee that brings fellowship after the service. They are responsible for Bible recitation and ensuring that newcomers feel welcome. They also represent well over half of the members of the congregation.

Yet they’re not able to hold the positions that gave them the power to influence important decisions. Men hold almost all the positions of power in the church. It is very rare, if not impossible, to see a woman pastor.

Iftu feels strongly that women are shaping the future of the institution. One example she cites is choirs. “Music is a vital component of the church service,” she said.

She oversees her church’s choir, whose membership and leadership are entirely female. The fact that choirs are run by women in the church, means that the women use the power of singing to amplify their voices.

The choir sets the tone for the church and without them, the church would not feel like home.

Another example is a group called Mabarra, a women’s group held once a month run by Iftu. This group is created where women are able to present new ideas, give personal opinions, and discuss issues about the church. Through Mabarra, women are now able to hold positions in the church in which their voices are heard and strengthen the Oromo women community.

As women grow more influential in the church, they are seen differently by men. They are seen as the light who brings ideas, the right hands of the church, and more women can forward and break this cultural barrier.

To this day, Iftu still attempts to exercise power and influence the direction of the church by less direct means. The question of whether the relocation of Oromos in America changed their lifestyle remains, in which Iftuu notes, “Adaptation to other cultures is growth in our own.”

By Iftuu’s thoughts, Oromos came from another country driven by only one way of lifestyle and culture, so by creating allies and expanding our way of thinking we are not only embracing other cultures and sharing ideas but producing a brighter future for Oromo women.

Education as means to equality

More than any other factor, education is the key to the changing of gender roles in Oromo-American culture.

Education is equally encouraged for both men and women. This is a result of cultural advancement in which when the parent leaves their own country for a new one, they naturally want the best for their child regardless of gender. Oromos residing in different countries allowed for them to obtain a new perspective on women attending school.

I, a first-generation immigrant, have a mother who is insistent that I attend a 4-year college, to achieve my aspirations of entering the medical field.

Education is so important to my mother that she was willing to work extra hours and save to send me to a private school so that I had the best chance of landing in a competitive college.

“I want my daughter to reach all the goals I was unable to reach,” is what she says when asked why she does all she does.

This is a common work ethic of foreign parents. They would go to any extent for their child to live a dream they could never achieve.

Gifti Galdi, 17, is a rising senior at Lancaster Mennonite High School. Her mother came to Lancaster from the Oromia Region of Ethiopia in September of 2001. Gifti plans on majoring in a pre-med track in hopes of pursuing a career in the medical field.