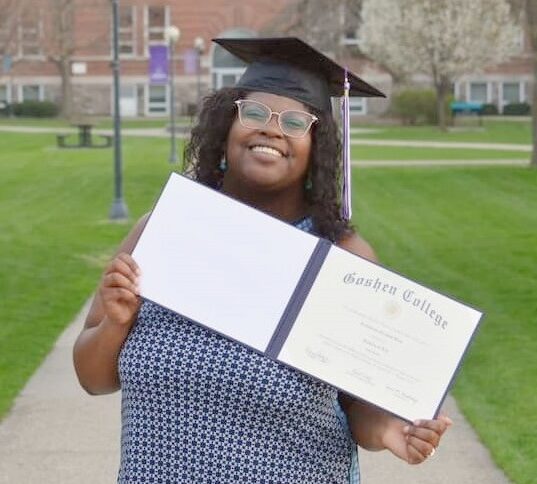 Rachaelann Yoder Klink, 24, may have only been a Lancastrian for a few months, but she’s already putting down roots and getting involved in many ways.

Yoder Klink, 24, is from Chambersburg, but her husband hails from Lancaster. They moved here in April, and Yoder Klink recently started a job at the Lancaster County Clerk of Courts office. She identifies as bisexual.

One United Lancaster recently sat down with Yoder Klink to talk about her role in the Lancaster County court system, what makes Juneteenth worth celebrating and why she decided to be openly herself.

The following interview has been cut and condensed for clarity.

One United Lancaster: Tell me a little bit about who you are and what you do.

Rachaelann Yoder Klink: I did my undergraduate at Goshen College in Indiana, with a double major in History and Peace, Justice and Conflict Studies (PJCS) with a Bible minor. Then I went on to get my master’s in Criminal Justice from Michigan State.

I work as a clerical specialist [at the Clerk of Courts office] and am really enjoying that so far. Essentially, all of the background paperwork and information that gets passed between judges, attorneys and the DA [district attorney] comes through our office and it’s our responsibility to issue a lot of that. We sit in on court and different trials to record the verdict and any conditions that come along with that, then we make sure that gets sent out to the appropriate parties.

Yoder Klink: I think that we as a country have not done a very good job of just acknowledging literally how this country began and what propelled this country. We’re a young country and we’re a superpower.

How did we become a superpower when we’re only about 300 years old? We did that by systematically destroying the previous population that lived here and then using free labor and the bodies of Black people to build this country. I don’t think the U.S. has ever fully acknowledged that in a way that allows us to move forward.

We have people who always want to say, “It was so long ago, why do we still have to talk about it?” Well, because we’ve ingrained it into all of our systems so we don’t have to think about the way it’s still affecting us.

I know that when they decided to have Juneteenth become a federal holiday, it was kind of a big deal because people were saying, “Why do we need this? This doesn’t mean anything to me. Slavery was so long ago and we had a war to sort that out.”

OUL: And yet slavery was still happening two years after the Civil War ended – hence Juneteenth – and discrimination has continued.

Yoder Klink: What we’ve done is come up with these codified ways of keeping discrimination alive and well without actually having to say the quiet part out loud.

OUL: My understanding of Juneteenth is that it’s also a celebration of heritage, culture and freedom. Do you celebrate Juneteenth at all and if so, it what ways?

Yoder Klink: If there are events going on, I like to attend those because it’s nice to have a part of Black history that is a celebration because so much of it is tied in with this incredible amount of sadness and despair.

I think that Juneteenth is profound because it’s the day of true freedom and that’s something you can celebrate.

For me personally, listening to music or doing my own reading up on somebody or watching media that celebrates and uplifts Black people is just something that I like to ground myself in.

I was listening to WXPN and they were doing music from different Black artists and they had interviewed some of them who were alive and doing their music during the ’60s. So they were talking about MLK and meeting him and about Vietnam and all that stuff. It was really interesting to hear their take on history from the sidelines, like performing in and then having to immediately leave different events because things were segregated.

I think that music in a lot of ways is something that I identify with and try to listen to a lot. I like a lot of ’60s music and Black artists.

Yoder Klink: In the U.S. specifically, race is kind of that forefront issue so because you kind of think of the LGBT community as more of a “White people thing” and there are so many other things affecting me as a Black person and Black women, I used to think, “I don’t really have time to get into this whole other issue.”

But then it became apparent that this wasn’t just a White person issue and there is a heavy presence of people of color in the LGBT community and a lot of times, those are the people facing the worst discrimination or danger just because of that intersection.

That’s always something that weighed on me because I didn’t want to make myself more of a target. I think in recent years, it’s been clear that none of this is a choice and I am tired of trying to make myself small to fit in when all it does is make you sad.

I think I found a place where I can celebrate it while acknowledging the issues and the steps that we still have to take.

OUL: When you say that you’ve found a place, is that a place within yourself or within an organization/community space?

Yoder Klink: Emotionally, but I’ve also found different online communities that I really connected to during the height of Covid. I felt like I really needed to get out of my head a little bit and I found a lot of Discord communities of Black women and women in general who represented many sexual orientations.

I think I’ve found a community physically, but also a place of peace within myself. I am who I am and I’m not taking any notes about it from other people.

OUL: What do you think helped you get to that place of peace?

Yoder Klink: I think sometimes when bad things happen, you think that it’s because they know something about yourself that you don’t want them to know. But that’s not actually true. When people do bad things to you, they’re just doing it because of whatever perception they have of you.

I realized that people were still being racist or homophobic or bigoted in some way whether or not I was being out and open about myself. I obviously can’t hide my skin color, but I’ve always been worried about taking up too much space. But I realized that that racism and homophobia and worry about gender conformity was happening regardless of if I made a statement to the world.

I thought to myself, “Well, if they’re saying it anyways, why am I making myself miserable?” So now I just be who I want to be and that’s that.