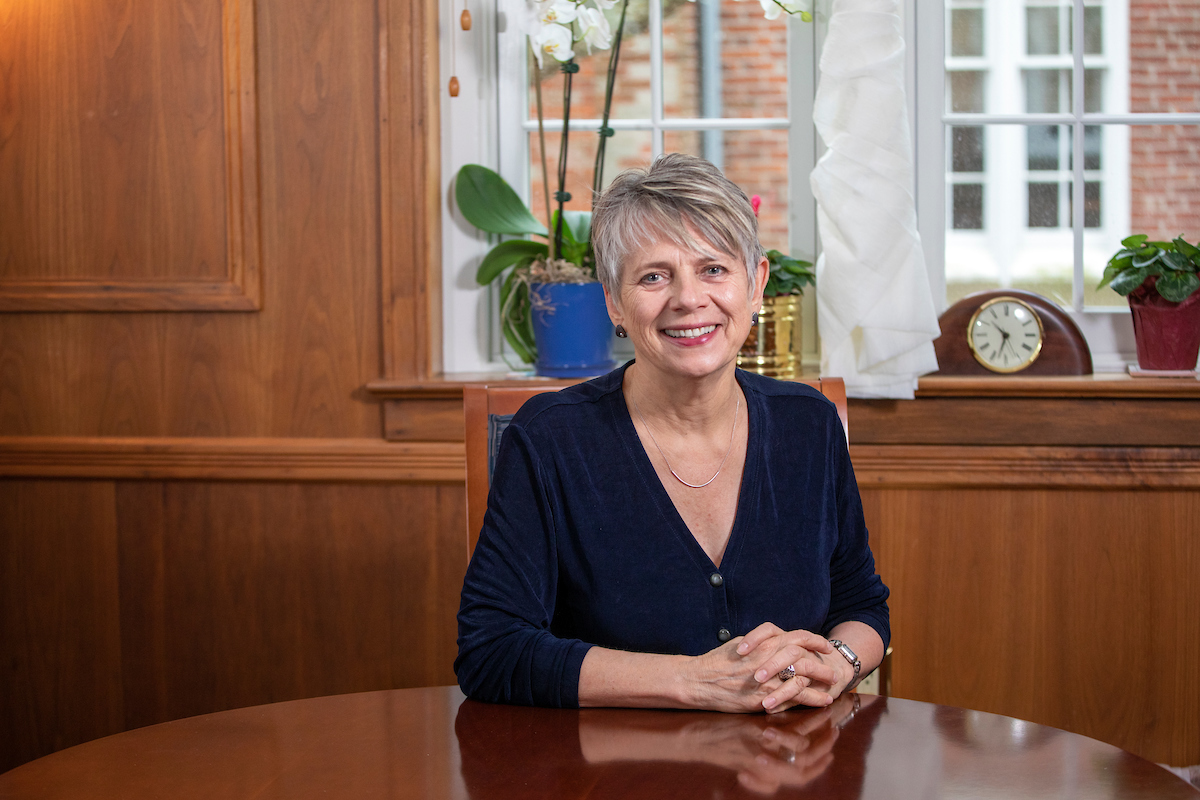 Barbara Altmann is the 16th president of Lancaster’s Franklin & Marshall College and the first woman to hold that position. Appointed in August 2018, she has been enjoying the college and the Lancaster area for the past four years.

Trained as a professor and researcher in Medieval French Literature, she taught in the department of Romance Languages at the University of Oregon for more than 20 years before moving into administration.

From there, she became provost at Bucknell University, “which is what brought me to Pennsylvania,” she told One United Lancaster. “And then, when the presidency at Franklin & Marshall opened up, I couldn't resist, and so I threw in my hat.”

F&M, an exclusively undergraduate institution, is one of the largest employers in Lancaster, with 600 to 700 staff on payroll. Its on-campus enrollment is about 2,300 students.

In 2020, in response to the pandemic, F&M had to move 550 classes online in two weeks’ time — a monumental victory for faculty and IT staff who worked night and day to make it happen. “It was great to discover a skill that we weren't even sure we had,” Altmann said. With most first-year and international students studying remotely due to the coronavirus pandemic, about one-third fewer students were on campus during the 2020-21 academic year.

This year, the goal was to return to a more normal in-person learning experience, and Altamann is happy to report success on that front.

“That's been a real joy,” she told OUL. “It's really complicated to run a residential institution when there's a pandemic, so it's been a huge exercise in good crisis management. We've actually done extraordinarily well and got through the pandemic just about as well as we could have. It's been because we've paid really close attention to national and local guidelines. We followed the science.”

F&M made masks optional beginning the week of March 14. “That's a big, positive change, although we do ask people to respect others’ preferences and to mask if requested,” Altmann said. “This may change. … We have had to change day by day, week by week, month by month, and that's really good for an institution to learn. We've mustered a lot of creativity, a lot of ability to adapt quickly.

“One of the biggest things we've learned is that our terrific faculty have figured out that they can teach really well [virtually]. It'll never replace in-person classes, but it gives us some options to add some hybrid teaching. It means we can be more creative about what happens in what format, and it will allow us to broaden our offerings so that F&M students can take classes during the summer without having to be on campus.“

Recognizing Altmann's pioneering position as F&M's first female leader, One United Lancaster spoke with her for Women's History Month. The following has been edited for length and clarity.

OUL: Now that F&M has had success with this transition and is looking at expanding options for its students, how can Lancastrians assist F&M to achieve future growth?

Barbara Altmann: I really appreciate that question and there are several different answers. One is that I really want Lancastrians to know that we are Lancaster's liberal arts college, and we want families and their college-bound children in the area to think very seriously about attending F&M. We're a terrific school … We really love our students, so I just ask that smart, motivated, college age kids think about coming to F&M. It may feel like it's a little close to home for some of them who want an adventure away, but we are a residential college so they can move in on campus, and they don't actually need to see Mom and Dad if they don't want to. That's one thing.

Another is we're so grateful to be so closely tied to the community and we would ask local employers to continue to look for employees among our grads. We produce extraordinarily well-trained students who are very adaptable and can help fill the gap in the workforce needs here. ...

Lancaster is actually our third biggest alumni branch after New York and Philadelphia. So we have a very large number of graduates working right in and around the area.

Many F&M students volunteer in the community through the Ware Institute, including in the Center for Sustained Engagement with Lancaster, part of F&M’s research branch where faculty and their students work on their research. One of these projects focuses on abating lead hazards — a major concern for local government and health officials.

OUL: How do you see the Center for Sustained Engagement growing over the next couple of years?

Altmann: Our researchers in those areas have pretty strong connections with the city, with other partners in the community. It's currently grant-funded (by Endeavor Foundation in New York City) and the grant funding will run out after about two more years. When that ends, we're going to have to figure out whether we can continue with that initiative or whether we're going to need to sunset those programs. That's something we'll be thinking about in the coming year.

After being delayed due to the pandemic, F&M has completed a new strategic plan and will implement it starting next year.

Altmann: It comes with some great new curricular developments (and) increased engagement with the community. How we interact with Lancaster is really important. We know we can continue to be one of the top 50 liberal arts colleges in the country, and that we need to be responsive to shifts around us.

There will be fewer college-bound graduates in the Northeast and in the Mid-Atlantic. That's a demographic shift that's happening right now, so we're striving for higher visibility — locally, so that Pennsylvania students and students in adjacent states know about us and take us seriously as an option for a fabulous undergraduate education; (but) we also want to make sure that the rest of the country and beyond know about F&M. 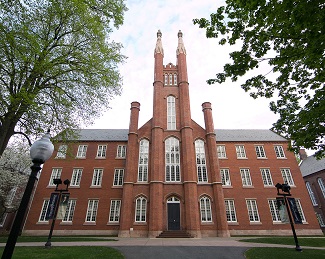 Altmann: I have to say that reconnecting F&M to the community has been one of my top priorities. It's really important that we're deeply embedded in the fabric of this city and of the county. We're so privileged to be located in Lancaster. It is an enormous asset for us, and it's an asset for our students, for our faculty. For our professional staff to be located here is just very unusual for a college like us. ... We have a responsibility and a deep desire to be real contributors to the wellbeing of Lancaster.

OUL: What about your work motivates you?

Altmann: I tried several other things before becoming a professor, and I just kept getting sucked back into the world of universities and colleges because it was by far the most interesting thing I've found to do in life. I'm an educator by nature, and I spent a long time in a research-intensive university training graduate students.

It was really when my children hit college age, or started thinking about it, that I realized what the power is of a really terrific undergraduate education. I trained a lot of master's and Ph.D. students, but then I saw my boys go off to college and learned I'd never been to a liberal arts college. I'm Canadian and there are very few colleges like this up in Canada. ... Watching my older son go to one of our peer schools was an extraordinary, eye-opening experience for me, both as an educator and as a parent. I saw what that kid learned and how we learn to think over four years.

I remember the exact moment I stood on the quad of his college and said, ‘If I get the chance, I want to help lead this kind of education. Because the way these young graduates enter the working world, they are so skilled in analytics and adaptability; in figuring out how to ask the right questions, in putting together teams across disciplines; to take on all of the biggest, hardest problems.’

I actually think that this kind of education is the best hope for this country and globally. We need people who think this way. So I decided to throw in my lot with a powerful undergraduate school and I couldn't have been happier when I had the chance to come here. I'm really at this stage in my career — I want to be providing the most powerful undergraduate education we can possibly give a generation of really impressive young people and give them the skills they need to flourish and help us bring the world back to a better place.

OUL: What activities or interests do you enjoy outside of your work?

Altmann: I do all of my paid work with my head, so when I have free time, I like to get into the dirt, and I like to cook. In order to keep body and soul and mind all pulling in the same direction, I also stay very active. Cooking, gardening and staying active are the things that help balance a lot of hard thinking.

I love to go to Central Market and get the best local product produce at any given moment of the season and then see what I can do with it. I like to experiment. (As for gardening) I like nothing better than a homegrown tomato, so I do tomatoes, but mostly I'm interested in building perennial beds that will flower at all seasons and be a bright splash in the neighborhood.

OUL: Anything you'd like to add about family life? You mentioned your sons.

Altmann: They have taught me an extraordinary amount and they have taken me on adventures into places and areas and fields of thinking that I would never have explored on my own. …

They are really remarkable young men. The older one is an engineer who's a musician in his free time, and the younger one is a musician professionally, and then does other endeavors to pay the rent, so they meet in music. They are multilingual. They introduced me into their generation and the way they think, and they've just been the joy and delight of my life.