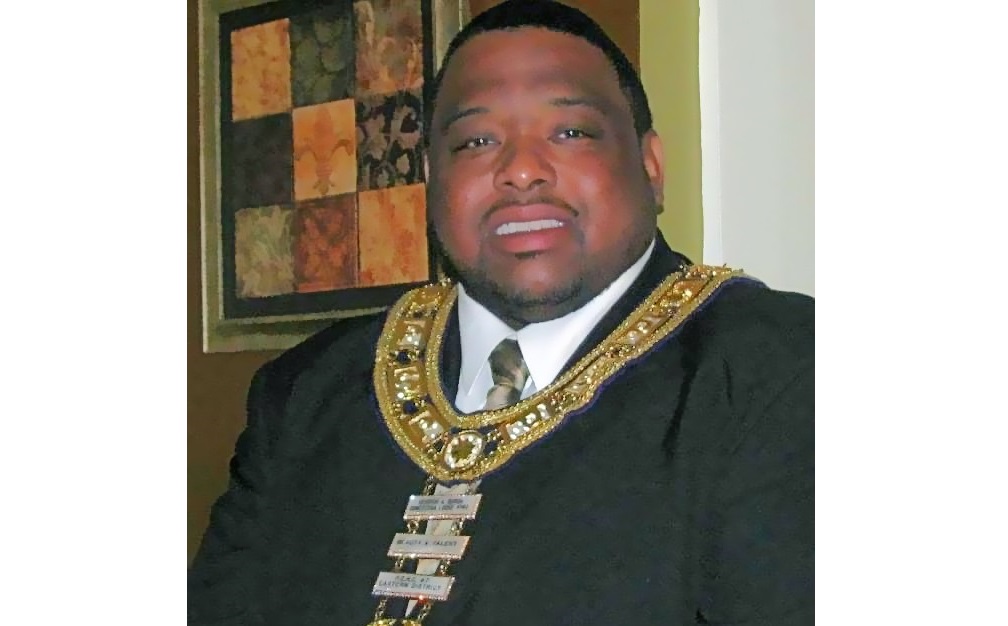 Derrick Burch is passionate about connecting with others and creating a web of collaboration within the community, as evidenced in his decades-long career in community engagement.

Burch is the Community Engagement Coordinator at The Mix, a community hub in southeast Lancaster city. It offers after-school and summer programs for local youth, educating and empowering them and their families.

One United Lancaster recently sat down with Burch in the lobby of The Mix to talk about the importance of community engagement, his family's legacy of service and a well-deserved upcoming trip to Dubai.

One United Lancaster: Tell me a little bit about yourself.

Burch: I'm a lifelong resident of Pennsylvania. Here at The Mix, I serve in the capacity of the Community Engagement Coordinator. That encompasses a lot, from making connections with other groups doing the same type of work, to stakeholders that we deal with across the city and county. I'm also the grant writer here, so it's a 50/50 job, but it all goes hand-in-hand.

I've been helping as a consultant for about eight to 10 years; helping with grant writing, trying to find research and align services and bring everyone to the table. I just try to connect the staff that are already here with anything we're trying to do.

OUL: How did you get into this specific role?

Burch: About two years ago, we realized that we don't need a full-time development director for a small agency such as this. At the time, our budget was only $180,000 to $200,000 per year. So, we tossed it around and decided that we needed to have just one part-time person to do both community engagement and development. Then as we discussed the job descriptions, I said, "I could do both of those," and that's how it came about.

So basically what I do is connect people and make sure that our people are at the table for those conversations happening about our youth and be proactive.

We try to train everybody to always be bringing partners in, because a lot of times a partnership might not look like you wanted it to look, but it's always better to bring partners in.

OUL: Have you always been interested in community engagement work?

Burch: I worked at Crispus Attucks Community Center for about 15 years, and I've served on several boards throughout that time. I was on the steering committee for United Way's First Class and Project Blueprint and I talked to Kevin [Ressler] about bringing that back. [Project Blueprint, an initiative to increase diversity in nonprofit leadership, is returning to United Way of Lancaster County this year, under the direction of Aiza Ashraf, United Way's director of equity.]

I also served as director of Inner City Group, which was an Economic Development Corporation in the southeast that was formed in 1996. Four or five agencies in the southeast decided to form a partnership so that instead of having five applications for $100,000 go to Harrisburg, why not send one application and get $1 million for all of us?

That became a pilot program that turned into the "Weed & Seed" initiative under Gov. (Mark) Schweiker. They ended up taking our model here and brought it to different agencies all along the Route 220 corridor.

OUL: Did you do a lot of things within the community as a kid?

Burch: I grew up going to the Boys & Girls Club and the Crispus Attucks Community Center. They instilled being community-oriented into the youth: Get out and clean up your neighborhood and be involved in it. During snow times, we would go around and shovel snow for the elderly. So as a youth, I was taught about leadership and engagement. To be a good leader, you have to get dirty sometimes.

We have a leader like that with Kyonna [Bowman]; she is hands-on everything. She will never be in a meeting where someone brings up something about her agency that she didn't already know about.

OUL: How many people work at The Mix?

Burch: I think it's around 17 to 20, but there's always five main people. My office is upstairs and I work from home a lot, so there's always new interns and workers that I see when I'm here.

We have about 60 to 80 students a day for the after-school program, which runs from 3:30 to about 6:30. It's all enrichment programming like STEM, music and the arts and stuff like that. I don't work with the kids, so over the last couple weeks I've been sitting in on different sessions with the enrichment providers and I was like, "Wow, I'm amazed."

I think that's important for my grant writing too because it's better when you know what's actually going on but also key to see that everybody's still doing what they need to with the grant money because we want to be good stewards of the funds that we receive.

OUL: That makes sense. Besides that, what other parts of your job do you look forward to the most?

Burch: The most important part for me is the community engagement piece. Sometimes I come in and I don't make it to my office for hours because different people are coming in and there's conversations going on about some new resources or new programs we want to initiate.

I probably put in 50-60 hours per week, but I'm only billed for 20 because it doesn't seem like work all the time because what I've always done is work in the community and try to connect the dots.

Besides that, I love seeing the smiling faces on the kids and parents. We're really intentional on the holistic approach to family; even the siblings that don't come to our programs. We include them every time we give gifts, anytime we have meals, we always make sure we bring families together to enjoy the activities that the kids have done.

OUL: Speaking of family, tell me a little bit about yours.

Burch: I was born and raised in Lancaster and I come from a large family. My dad was the principal at McCaskey [High School} and my stepfather was the superintendent for the School District of Lancaster. My mom works for SACA [Spanish American Civic Association] in development and has been there for 40 years.

My grandfather owned a barbershop that is now on South Duke Street, right around the corner, and my cousins and nephews still cut hair there. So, we've all worked in the community and lived in the same neighborhood.

I'm not married, but I have two adult daughters and five grandchildren.

OUL: Besides spending time with your family, what else do you like to do in your free time?

Burch: Sit home and watch "Law & Order," Westerns and the news. I like to sit down and relax in my free time because I run a catering business as well, DD Catering & Event Planning. This year will be 36 years, but my plan is to start cutting it off in June.

I stopped taking large jobs like weddings and stuff about a year and a half ago because every year I said I was going to quit and then I'd look at my calendar and I'm already booked out two years in advance. So in June, I'm going to decide if I want to stop or just be selective. I don't take vacations often, so that's what I plan to do.

OUL: If you could visit anywhere in the world, where would you go?

Burch: I'm going to Dubai in August. I have a cousin who lived there for about 10 years and his wife's from Dubai, so they're planning on going at the same time so they can show me around and I can meet her family. I'm excited to just relax, but also for the nightlife and the new culture.

I don't really do trips anymore, so I wanted to go big. Up until about 10 years ago, every year we would go down to the Dominican Republic because my stepmother's from there and we would go spend two weeks with her family. We would always take 25-30 people from here to visit her family there and connect.

OUL: What other plans do you have in the works, either personally or professionally?

Burch: There's a project called the 7th Ward Project and it's a written and oral history of the southeast (neighborhood). We've been doing tours of prominent homes in the southeast, neighborhoods of significance and explaining who our heroes were and our leaders in the community. I've received grants from LancasterHistory.org to be able to capture all of the history through oral testimonies and interviews with White and Black people who lived in the southeast.

For example, outside [The Mix] is North Street, but it's also named Nelson Polite Boulevard, because he was born and raised eight houses down from this building. We have signage in front of different locations throughout the southeast that explains who lived in this house, what the family was about and how they were involved in the community. We just got done with that project; putting up the stations throughout the last two months.

Related to that, I just started an initiative that's still in the planning stages. My stepfather grew up in this neighborhood, over on Green Street, and there's a house that we want to do a mural on of four or five community leaders that grew up on that block of the neighborhood. We're going to repoint the wall because it had bad damage and [the owner] was getting water in, so this will also help her out, too. We're trying to do a couple different murals around the neighborhood, like the Legacy Mural outside the building.

Community projects like this really bring people together, from the planning to the implementation of it to enjoying it when it's done. Creating a space for people to come and sit and visit is what neighborhoods are all about.

For example, we created Martin Luther King Plaza along South Duke Street, which is a granite wall, but it's a lower wall that you can sit on top of and gather. And it has a symbolic meaning for the neighborhood because it's named after a hero of ours. Art brings people together. It's a conversation piece and it's about culture. We have to implement things that will keep our Hispanic and African American culture alive.

OUL: From what I've seen, part of Black History Month is about celebrating that African American culture and history. What does this month mean for you and your work?

During Hispanic Cultural Month, the kids learn about South America and all of the Latin countries all month long. We brought in speakers every week to talk about their cultures, we gave out books by Latin authors and some folk dancers came in and it was amazing.

That's what I think Black History Month is all about, connecting the dots and telling the stories.