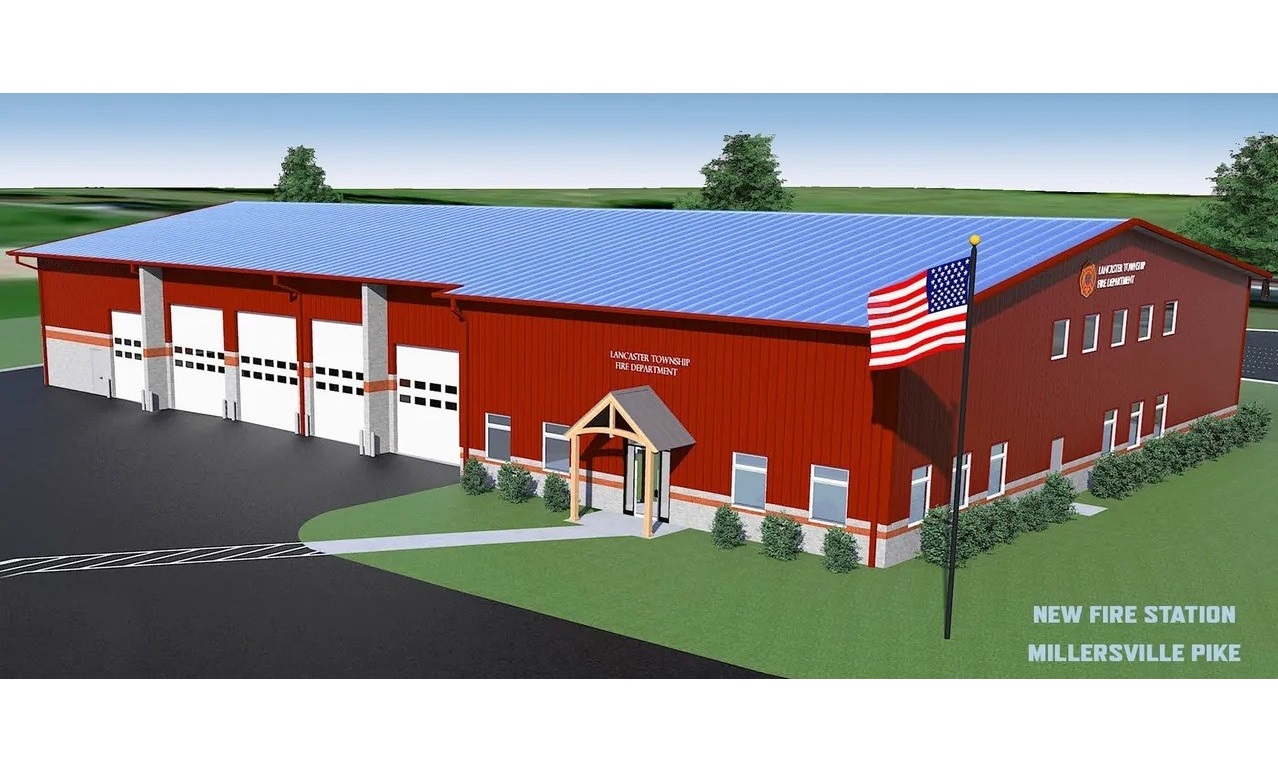 At their Wednesday morning meeting, the Lancaster County commissioners will consider contributing some of the county’s Covid-19 relief funds toward building the Lancaster Township Fire Department’s new fire station.

The volunteer department is seeking $680,000 in county American Rescue Plan Act funding, or 13% of the $5.1 million project cost.

The station is planned at 1275 Millersville Pike, across from the Manor Shopping Center. It would replace the fire department’s existing stations at 1250 Maple Ave. and 125 Fairview Ave.

They are both on the township’s western side, and are aging; the new facility will be up-to-date and 1275 Millersville Pike is a more central location, improving response times.

The land is owned by the School District of Lancaster, which is leasing it to the fire department for a nominal $1 for 99 years.

The project had been budgeted at $3.7 million and was ready to go in early 2021 but it stalled due to the pandemic and supply chain issues. Since then, costs have ballooned to $5.1 million, township fire Chief Steve Roy said at the county commissioners’ work session Tuesday.

The department has pledged $2 million of its own funds to the project, which has been slightly scaled back, and has arranged a low-interest loan for $2.4 million with the U.S. Department of Agriculture, which provides funding for rural fire departments. The $680,000 that the department is requesting is needed to meet the requirements for the USDA loan.

There’s a good case for supporting the project, although perhaps not the full $680,000 requested, Commissioner Josh Parsons said. The county’s new prison will be within the department’s core service area and the township has been a “willing and helpful” partner on that initiative.

Moreover, fire departments frequently respond to each other’s calls to provide additional support, so the fire station will have an impact beyond the township’s borders.

Broadly speaking, capital projects like fire stations aren’t eligible for ARPA funding, but allocations under $1 million can be made if projects fall under another ARPA eligibility category — in this case, public safety.

The fire department’s ARPA funding application is one of eight received by the county to date that fall under that heading. All of them were presented and discussed at Tuesday’s work session.

The others, submitted by municipalities and emergency response organizations, range from the replacement of emergency radios, vehicles and the like to the construction of a sidewalk. The commissioners are deferring action on them for the time being.

Echoing comments they’ve made before, the three commissioners said that in general, they don’t think ARPA should go toward routine maintenance or operational costs. Nor, they said, should it go toward projects with limited local impacts, since municipalities have their own ARPA funds that can be used.

On Tuesday, they added that they’d rather see municipalities band together to make joint applications, rather than applying for county funding piecemeal. Doing so would give projects the kind of broader impact that the funding is intended to support and could help reduce costs through bulk pricing.

Two of the proposals did not meet eligibility guidelines, deputy county clerk Tammy Moyer said. Lancaster Emergency Medical Service’s request for funding for three power lift stretchers does not meet the county’s requirement that county ARPA dollars not be the sole funding source; and West Lampeter Township’s proposed sidewalk isn’t an eligible use under federal guidance. Instead, the township may be able to access other funding through the county’s Metropolitan Planning Organization, which oversees transportation planning.