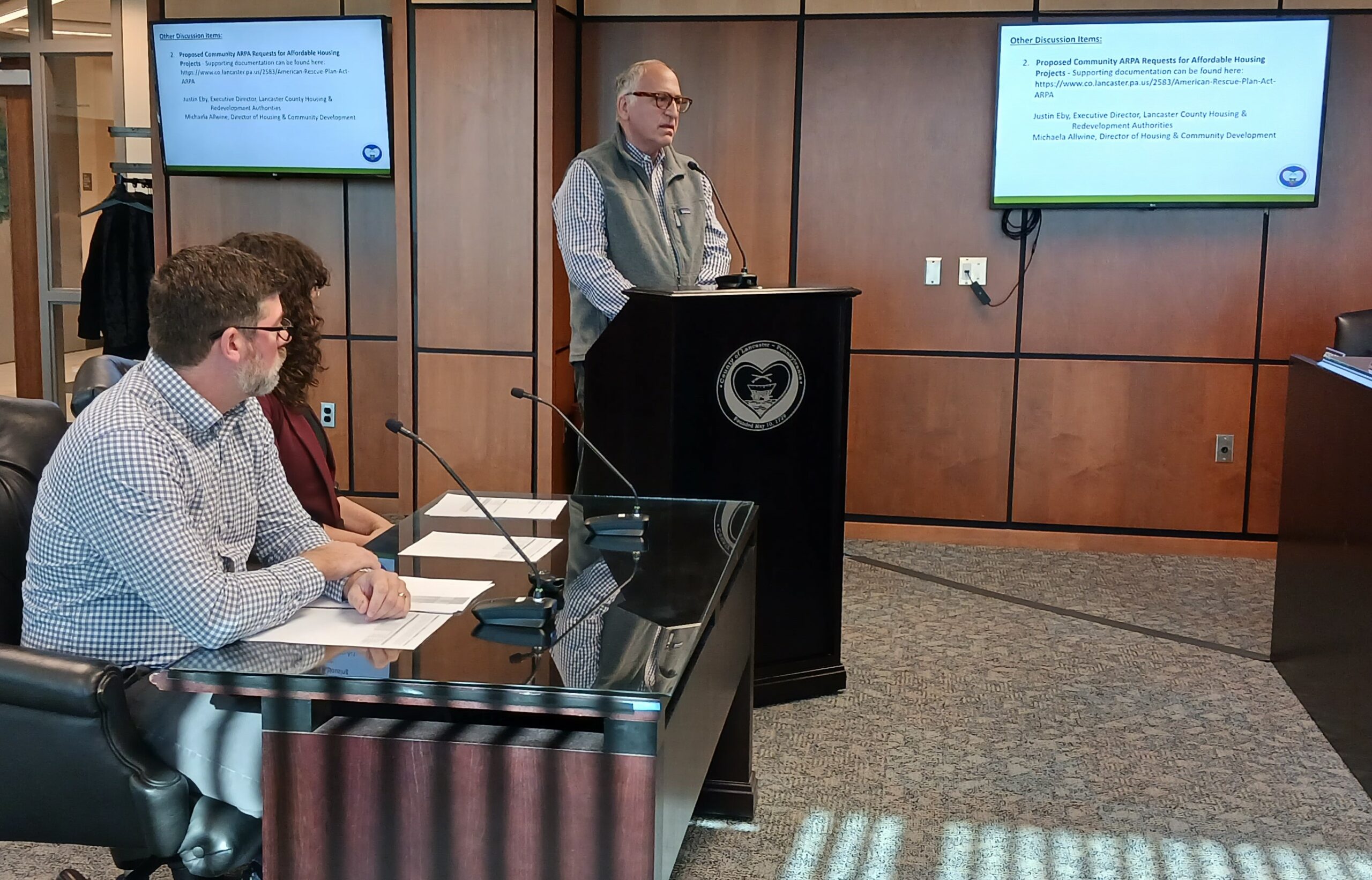 As they did with water, sewer and stormwater infrastructure, the Lancaster County commissioners are going to take at least a week to think about it before they make any decisions on allocating American Rescue Plan Act funding for affordable housing.

At Tuesday’s work session, the commissioners heard details on seven affordable housing developments seeking ARPA money. They range from a $365,000, two-unit nonprofit project in Elizabethtown to a private developer’s $59 million, 226-unit project at the former Lancaster Stockyards. (In the latter case, 45 of the units would be officially classed as affordable.) In all, the applicants are seeking nearly $14 million in ARPA funding. They are as follows:

The Lancaster County Redevelopment Authority reviewed them. It recommends awarding a total of $8.35 million to six of the projects. It recommended against funding the Rebmans project, saying the proposed rents there don’t meet affordability standards.

Commissioner John Trescot said he would vote for the requests made by HDC MidAtlantic, YWCA Lancaster and Real Life Community Services.

Commissioner Josh Parsons said he would back the two smallest requests, Real Life’s and the United Churches Elizabethtown Area, but that he would need further convincing to support grants for any of the others. They’re likely to move forward whether or not the county gives them ARPA money, he said.

Commissioner Ray D’Agostino said he wants to “dig a little deeper” before supporting any of the projects.

He and Parsons both expressed reservations about government-designated affordable housing as such — that is, units that are publicly subsidized and restricted to certain income levels.

D’Agostino acknowledged there is an affordable housing crisis, but said: “We are not going to fund our way or build our way out.” That, he said, would mean a “government takeover” of housing, something he adamantly opposes.

Much of the affordability problem, he said, stems from over-regulation of housing at all levels: local, state and federal. That has to change, he said.

He and Parsons both said they favor encouraging homeownership, and that it’s problematic when individuals and households remain in affordable rental housing year after year. D’Agostino said he would want projects funded with county ARPA money to include programs that help tenants to achieve financial independence and homeownership.

Leaders from five of the developers were on hand to make their case. They emphasized the scale of the demand they’re attempting to meet, the challenges of assembling the financing they need and their readiness to move forward sooner rather than later. (The two organizations not represented were United Churches Elizabethtown Area and Oz Fund.)

“I hope you fund them all,” said Ed Kaminski, director of Landis Quality Living at Landis Communities.

The redevelopment authority did not review six other affordable housing ARPA applications submitted to the county. Three of them were withdrawn, and the other three didn’t provide the information needed for the analysis.

(Editor’s note: This article was updated Dec. 27 to correct the number of units at The Apartments at College Ave.)