Lancaster Chamber President Tom Baldrige, top center, is flanked by the six featured speakers during the chamber’s online State of the County presentation on Monday, March 22, 2021. 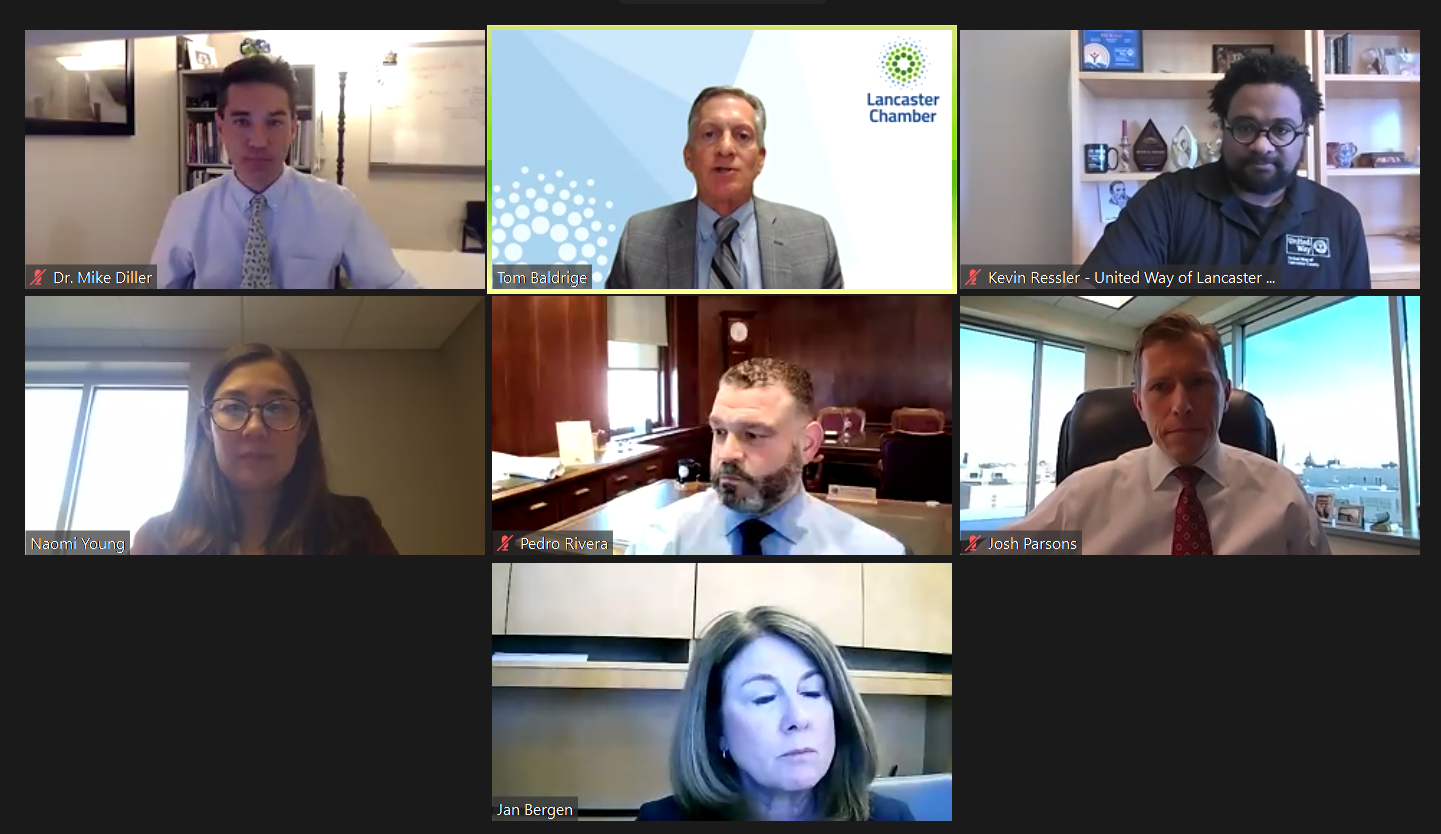 Lancaster Chamber President Tom Baldrige, top center, is flanked by the six featured speakers during the chamber's online State of the County presentation on Monday, March 22, 2021.

Lancaster County has to develop a robust public health capacity so it can deal with future pandemics and other health challenges in a "unified, coordinated way," Jan Bergen, outgoing President & CEO of Penn Medicine Lancaster General Health, told the online audience Monday during the Lancaster Chamber's State of the County presentation.

But developing that capacity need not necessarily involve setting up a public health department, she and Commissioner Josh Parsons said.

Bergen and Parsons were among the six speakers at the chamber's virtual event, which was dominated by discussion of Covid-19's social, economic and health impacts. The pandemic has revived a longstanding local debate over setting up a health department; Bergen's and Parsons' comments Monday echoed those they have made previously.

Parsons said the key questions are whether a health department would be a "determining factor" in lowering, infection rates, deaths or hospitalization rates. During the Covid-19 pandemic, Lancaster County has compared favorably on those metrics to Pennsylvania's other counties, including those with health departments, its lack of one notwithstanding.

The law on health departments dates to the 1950s and Parsons said it would require millions of dollars to set one up. He suggested the county might be able to gain the same benefits by another route.

When all is said and done, the decision needs to be made "in a way that takes the emotion out of it and actually uses facts and data," he said.

Bergen concurred that the state's health department law is outdated. What matters to LG Health is readiness, and "there may be lots of different ways to get there," she said.

Joining Bergen and Parsons as featured speakers were:

Ressler said it's important to have a health department or comparable "nonbiased coordinating entity" that thinks broadly about community health — addressing not just infectious disease, but environmental determinants such as air quality and lead paint in housing stock, and doing so from a public-welfare standpoint.

Young said the county is seeing a "K-shaped" recovery: While a large portion of the local economy is trending upward, there is a portion that is not.

When the pandemic hit, people shifted their spending toward goods and away from services. Until Covid-19 is vanquished and life returns to normal, the service economy will remain in a "holding pattern," she said, with ongoing effects on businesses and jobs. 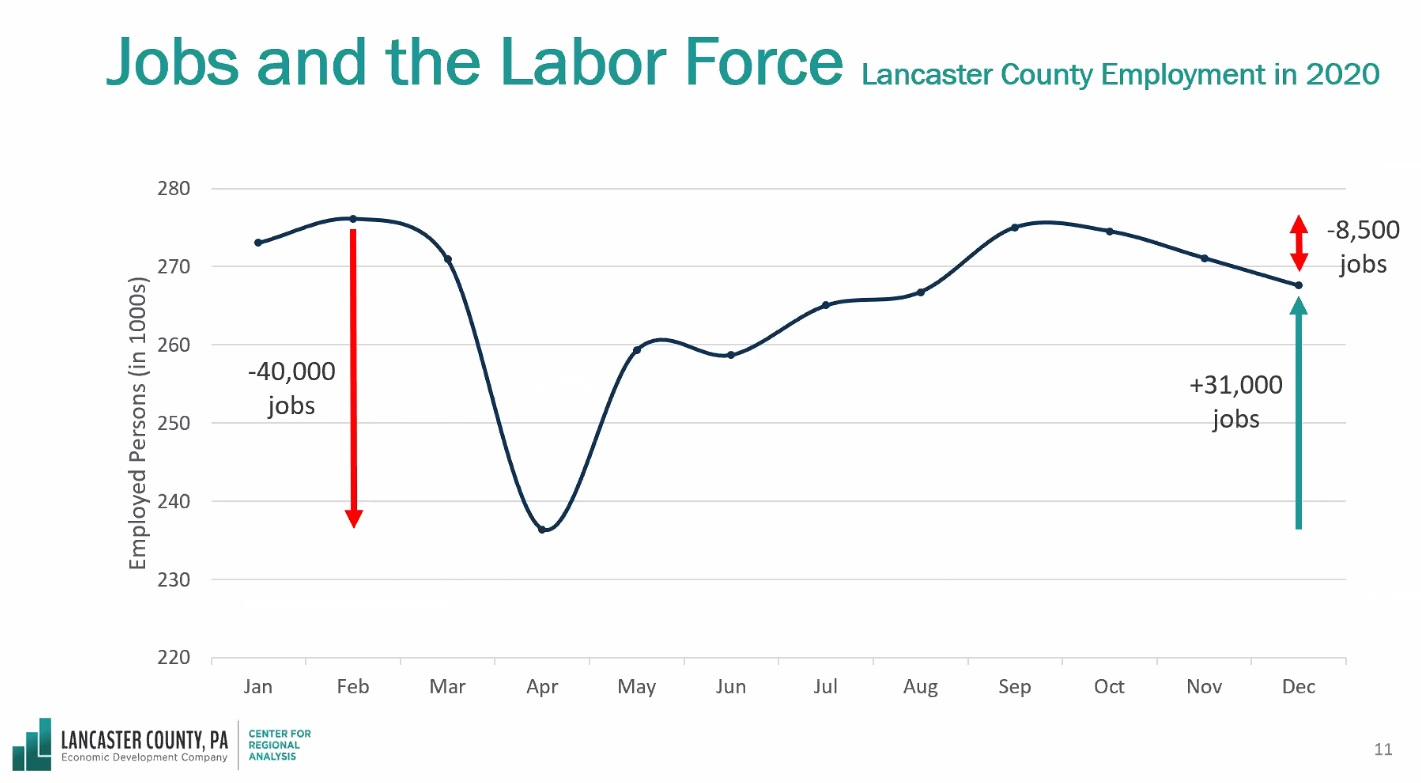 This slide presented during the Lancaster Chamber's State of the County shows the dramatic changes in labor force numbers during the pandemic. (Source: Economic Development Company of Lancaster County)

Young, Ressler and Rivera all mentioned the disparate impact the pandemic has had on vulnerable populations. Poorer households and Black and Brown communities have all faced greater likelihood of unemployment and financial losses, and have had more gaps to bridge to obtain access to health care, education and social support.

Still, Lancaster County's record of tackling social issues collaboratively has paid off, Rivera said: Thanks to those earlier efforts, it was able to pivot in the pandemic much more rapidly than other Pennsylvania communities.

Parsons said the county's track record validates the approach it took, which sought to protect lives without shutting down the economy. With vaccination accelerating, there should be no excuse not to return fully to normal by late spring or summer, he said.

Diller's presentation focused on the pandemic's significant mental health impact: Reported symptoms of anxiety have tripled and symptoms of depression have nearly quadrupled. He urged everyone to embrace "a culture of caring" and take advantage of community mental health resources.

Ressler highlighted both the generosity of the Lancaster County community — as exemplified by the success in raising $1 million for local Covid-19 relief through the Lancaster County Community Foundation's and United Way's joint Lancaster Cares initiative — and the mismatch between the nonprofit community's resources and the scale of the social problems it's tasked with solving.

"We continue to look to you all to help us accomplish large goals," he said. In Lancaster County, he added, "'Good enough' can't be good enough. We want to be great."

Bergen, who has been LG Health's CEO for more than five years, is retiring this month. Her successor is John Herman, a health executive who comes to Lancaster from the Ochsner Health System in New Orleans.