On Sept. 13, Ricardo Munoz, a 27-year-old Lancaster man with a history of schizophrenia and bipolar disorder, waved a knife as he charged at a police officer, who shot and killed him.

Cases like Munoz' are all too common: Around 25% of police shootings involve a person with a mental health disability, according to the Washington Post. In late October, police in Philadelphia shot and killed Walter Wallace Jr. during a mental health crisis.

U.S. Sen. Bob Casey, D-Pa., believes many of those incidents can be avoided. Today, he is introducing reform legislation in support of that goal: the Human-services Emergency Logistics Program (HELP) Act, and the Safe Interactions Act.

The HELP Act would allocate funding to improve existing state 211 systems so that non-emergency 911 calls can be routed to them routinely, freeing up 911 to focus on its core mission of dispatching police, fire and ambulance services.

The Safe Interactions Act would provide grants for training police to interact safely with people who have mental illness or other disabilities.

Making the changes that are needed won't be easy, Casey said Wednesday in an online media briefing on the legislation, "but we've got to try." 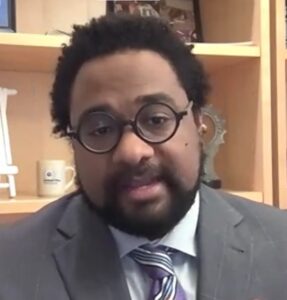 Kevin Ressler, President and CEO of the United Way of Lancaster County, speaks during a virtual press roundtable on Wednesday, Dec. 9, 2020.

Joining Casey on the call were advocates for reform, including Kevin Ressler, president and CEO of the United Way of Lancaster County, which oversees the 211 system for Lancaster County and six neighboring counties.

Munoz fatal encounter with police "should never have happened," Ressler said. After all, the young man and his battles with mental health had been known to law enforcement and counselors for years.

"It failed the officer, who arrived with the intention to help and not harm; and it failed us as a community by adding to the community tension between trust and distrust of institutions of authority.

"How do we better respond? By responding before the moment of crisis."

The starting point should be 211, Ressler said. It's not a replacement for 911, but with more funding and better coordination with 911's operations, it will be better able to head off crises before they occur.

The 211 service helps individuals in need find local resources and assistance, including food, housing, mental and physical health providers and more. It is the most comprehensive source of locally curated social services in the U.S. and also serves much of Canada.

In 2020, 211 was more needed than ever. Calls to 211 East, the Lancaster County-based service, rose 40%. Since the pandemic began nearly 40% of calls have been Covid-19 related, and the number of people seeking help with rent, food and utility bills has increased dramatically.

Nationwide, 211 is on track to log 20 million calls this year, about twice as many as usual.

Having such tools "is crucial to our everyday duties," he said. Also crucial, he said, are arrangements that allow for "warm hand-offs," the transfer by police of individuals directly to the social services that they need.

Casey acknowledged the bills face a steep uphill climb in Congress, but he said there is bipartisan recognition that reforms such as those he is proposing could save lives.

Asked whether 211 might be brought under local government control — like 911, which is a county service — he said there could be different solutions in different places. The main thing, he said, is building up the service, making 211 "a national effort, not just a patchwork."

(Editor's Note: The United Way of Lancaster County is the sponsor of One United Lancaster.)