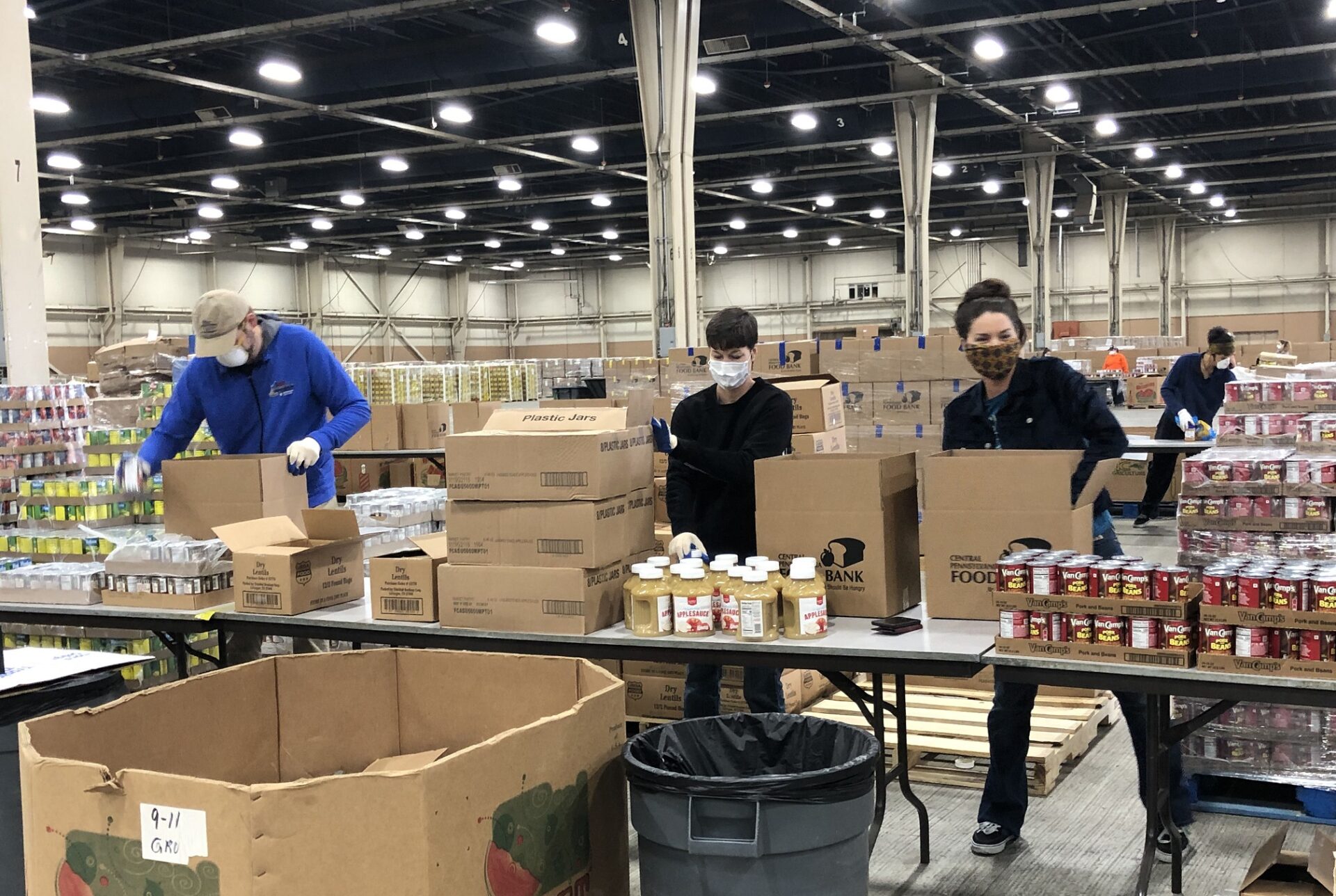 (Editor's note: This article is part of One United Lancaster's Responding to Covid series.)

As the coronavirus pandemic spread across the Pennsylvania in spring 2020, it quickly became clear that the Central Pennsylvania Food Bank's distribution hubs in Harrisburg and Williamsport were too small to handle what was coming.

It was impractical to reconfigure them for social distancing. Besides, "we had our own Covid scare early on," executive director Joe Arthur said.

The individual in question ended up testing negative, but two dozen people were idled for more than a week until the test result came back.

"That convinced us to look for bigger space," he said.

Fortunately, one was available: the Giant Exposition Hall at the state-owned Pennsylvania Farm Show complex. The Food Bank was able to move in and set up there in April. Rent was paid through a Federal Emergency Management Agency contract with the state; the Farm Show made its equipment available and its staff provided housekeeping services.

For the food bank, the arrangement was "an absolute game-changer," Arthur said, enabling it to provide a record-setting 50 million meals' worth of food to front-line agencies in the 27 central Pennsylvania counties that it serves.

One United Lancaster recently talked with Arthur about the Food Bank's work over the past year. The following has been edited for length and clarity.

Arthur: Being at the Farm Show allowed us to ramp up the amount of crisis response boxes that we were able to put together. The problem was, we didn't have enough food, because the food system went haywire, as we all know.

So, we had to work quickly with big friends like Giant Foods and Weis Markets and other suppliers and convince them to divert truckloads of food to us, even as they were trying to wire in their supply lines for their stores. It probably took till June before all of that stabilized.

Fortunately, most of our partner agencies stayed operating through the pandemic. To serve people, they did it in new safe ways — curbside pickups, no touch service. ...

We were able to really lean on our network. We're so thankful that the vast majority stayed up and running. That was immensely important.

We did have a change in the mix of volunteers. Some of our older volunteers opted out, which we understood. Fortunately, we were able to maintain enough volunteers through the pandemic.

By mid-summer, the disruptions in the food system seen in the spring had worked their way through, and things had stabilized. Arthur says he thinks of what followed as "the new abnormal."

Arthur: Around June, we had reached the height of about 50% more demand in food flow relative to the prior year. Then it started to moderate to more reasonable levels, but then in October, it started going up. November and December were off the charts, 50% to 55% higher than the year before.

Since the holidays it has moderated, not to pre-pandemic levels but to a point where we've been able to build up our inventory, and be ready for anything that happens.

Around the holidays, if you remember, some of the big federal relief plans had kind of waned by then, so we had people that were coming off of those benefits and struggling to get by. ... Then, late in December, there was the passage of additional stimulus. That started to help people pretty quickly, so we think that was a big part of January and February being more reasonable.

Now we're seeing the latest, the American Rescue Plan which is huge. We think that's going to be really helpful to the people that rely on us. At the same time, there's still a lot of need, because there's so much pent-up economic damage to household finances and businesses. 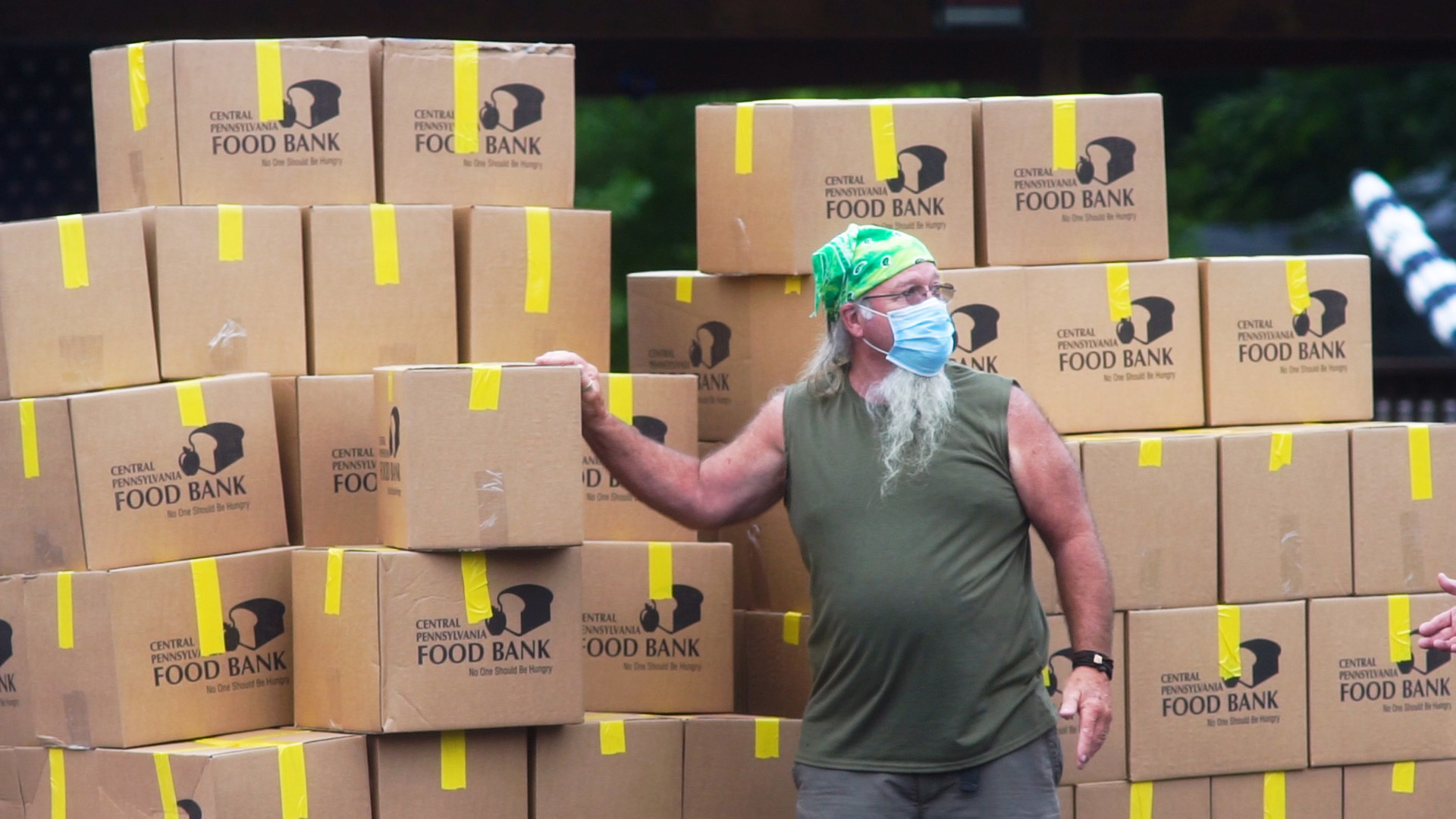 While two years sounds like a long time, a recovery to normal levels within that time would in fact be unusually fast.

People need to find jobs and they have to be jobs that pay enough so they don't need us. Going into the pandemic something like 55% to 60% of the families we serve were working families. They had jobs. It's not enough just to get a job back. It's got to pay enough, it's got to have enough hours and benefits and all of that.

The Food Bank hopes to stay at the Giant Exposition Hall at least through June. But it will move out eventually, and it's already laying the groundwork.

Arthur: Fortunately, we exist in an area that has lots of logistical space for dry goods. We were able to lease a very modern 50,000 square-foot facility. We're already storing inventory there and preparing for day when we get the notice (to vacate the Farm Show).

We hope to be back in our hubs with volunteers later in 2021, depending on how this all goes. Hopefully, by the fall.

The pandemic taught the organization a lot, both about its own practices and about the broader environment in which it operates.

We learned that our food systems have vulnerabilities, so we're going to be working on some food sourcing strategies that make us a little bit less vulnerable to that. We think additional local sourcing throughout our territory is an area to look closely at. We think there's an opportunity to do more with local producers and support our partner organizations in those efforts.

Certainly we learned a lot about how to avoid flus. Colds and flus are a challenge every year during flu seasons. So we're going to retain some of those practices that keep everybody healthy.

Another thing we learned is, it doesn't take it a lot to push thousands of people into instability. I think we'll be better prepared in the future for shocks. Whether it's a natural disaster, whatever it might be, we now know we can scale up and get the job done, but we'll be more prepared.