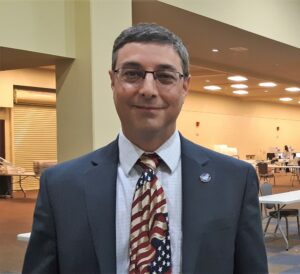 "We're going to be working all night," he said.

Volunteers spent Tuesday opening around 80,000 mail-in ballot envelopes, and those were being scanned in on Tuesday evening. Meanwhile, polling places were forwarding their in-person results.

As of 11:30 p.m., preliminary returns were showing lopsided wins for Republican candidates — though the state's election dashboard indicated the majority of Lancaster County's mail-in votes remained to be tabulated.

In the Presidential race, President Donald Trump was leading Joe Biden in Lancaster County 66% to 32%, with the remaining 2% going to Libertarian Jo Jorgensen. U.S. Rep. Lloyd Smucker was leading challenger Sarah Hammond 69% to 31%.

In state races, State Sen. Scott Martin had a solid lead over his challenger, Democratic City Council member Janet Diaz. Incumbents in the county's state House races were either unopposed or solidly ahead.

Turnout in Lancaster County 2016 was around 75%, he said. This year, preliminary reports suggest it might be around 80%.

Having such an energized, enthusiastic electorate is "fantastic," he said.