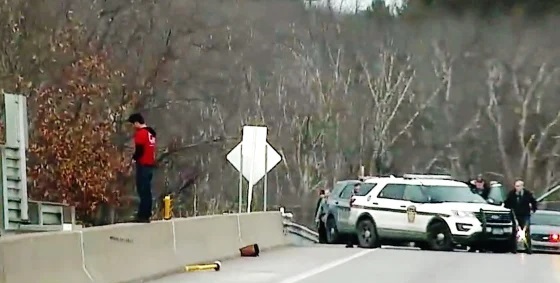 In this image taken from police video, officers confront Christian Hall as he stands on the ledge of an overpass on Dec. 30, 2020. (Pa. State Police | Spotlight PA)

• Father, his accomplice and abducted girls die in apparent murder-suicide: A days-long manhunt ended Thursday with police chasing a car off the road in Maryland. Seeing smoke inside the vehicle, they found the bodies of Robert Vicosa, 41; his daughters, Aaminah, 6, and Giana, 7; and accomplice Tia Bynum, 35, all dead of apparent gunshot wounds. Vicosa had kidnapped the girls in York County over the weekend after allegedly holding their mother captive and raping her. (Source: Fox 43)

• Teen killed by state police had his hands up: Video shows Christian Hall had a pellet gun in one hand when police shot and killed him on an overpass near Stroudsburg in December 2020, but he does not appear to have pointed it at officers. Hall's parents are seeking an independent review of the incident. (Source: Spotlight PA)

• Pa. House prepares vote on election law changes: The proposed law would implement voter ID, change various deadlines and allow pre-canvassing. It could be voted on in mid-December. (Source: WITF)

• Top execs at school pension system to leave posts: The Pa. School Employees Retirement System's executive director Glen Grell and chief investment officer Jim Grossman will be transferred to adviser positions at the same rate of pay, $227,000 and $485,000, respectively. PSERS is under investigation by the FBI and Securities & Exchange Commission. (Source: AP)