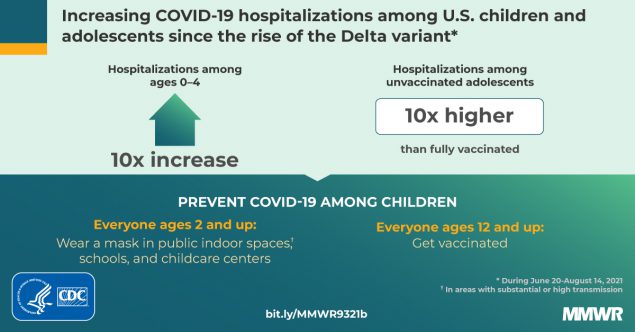 Two studies posted Friday on the U.S. Centers for Disease Control & Prevention website shed new light on the risk to children from Covid-19.

In one, researchers analyzed hospitalization rates for children and adolescents for Covid-19 as recorded in a database covering 99 counties in 14 states.

They separated out admission rates by age bands, finding that ages 5 to 11 are at lower risk for hospitalization than ages 12-17, or than ages 0-4, who currently are at the highest risk.

The researchers also determined that hospitalization of young people for Covid-19 has jumped nearly 500% since late June, owing to the rise of the Delta variant. Lastly, they found that for adolescents aged 12 and up, who are eligible for Covid-19 vaccines, hospitalization rates were 10 times higher among unvaccinated individuals.

The other study examined states' rates of childhood and adolescent Covid-19 emergency room visits and hospital admissions. It found that hospitalization rates last month were up to four times higher in states with low levels of vaccination.

According to Katelyn Jetelina, an epidemiologist at the University of Texas who blogs as "Your Local Epidemiologist," the studies answer "two huge questions": Whether risk of hospitalization varies by age, and whether Delta is more severe for children than other variants.

That's why the second study matters, she writes: It shows that community transmission can be slowed by widespread vaccination, as well as by mitigation measures such as masking, distancing, and school ventilation (as evidenced by the results of other studies).

"Your decision not to get a vaccine or implement public health measures in schools or the community is directly impacting the health of kids," Jetelina concludes. 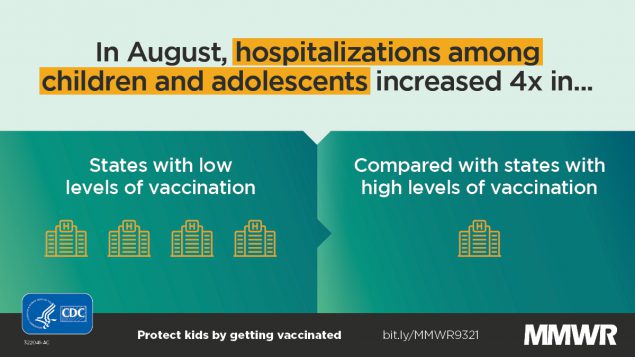