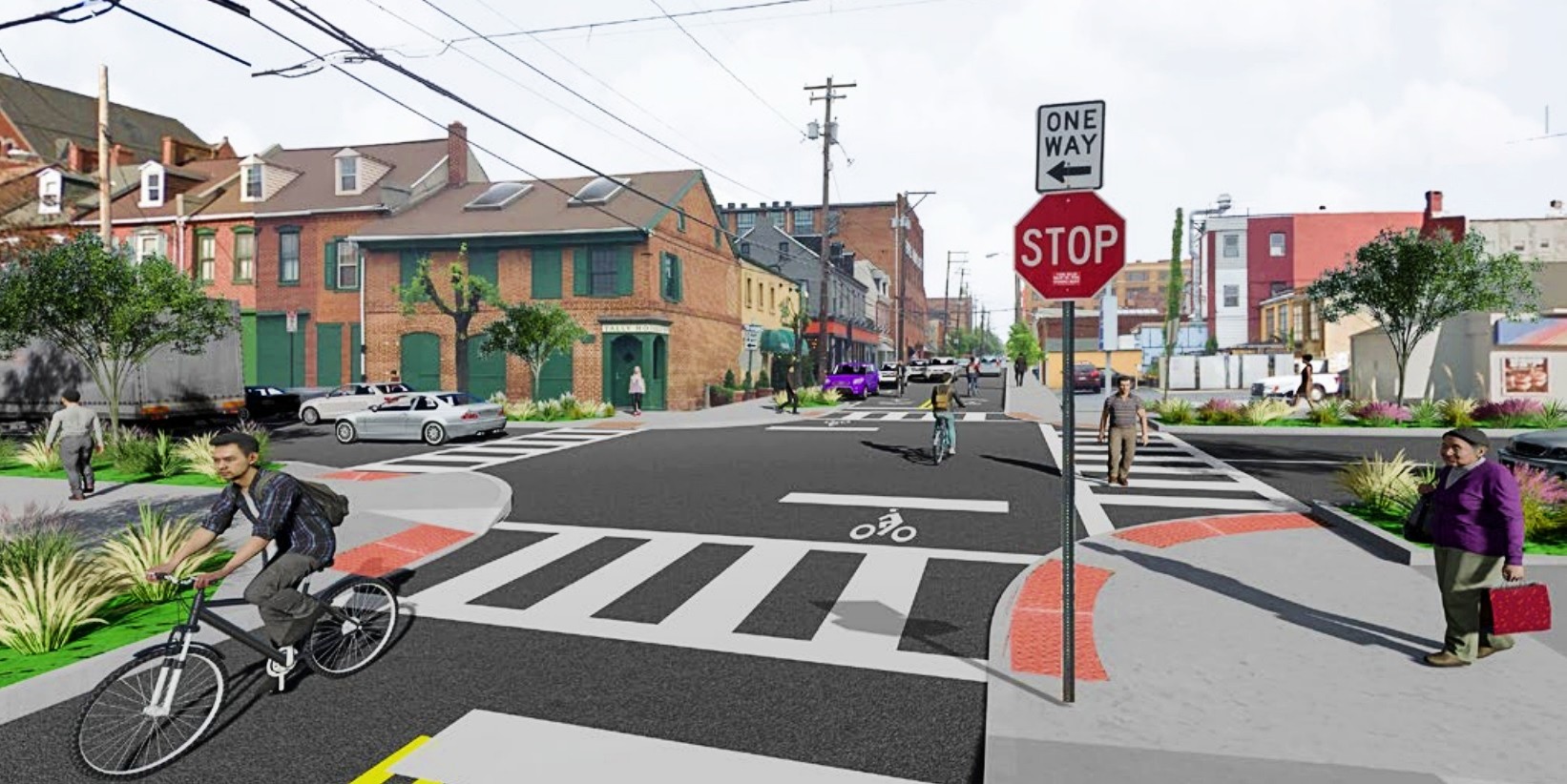 This rendering shows how Water Street would appear looking north at the intersection with West Orange Street after the implementation of a planned "bicycle boulevard" project. (Source: City of Lancaster)

"We really want this to be a people-centered corridor," said Laura Ahramjian, an associate planner at Kittelson & Associates.

Ahramjian was speaking at a public meeting earlier this month about the Lancaster city government's plans to convert Water Street into a bicycle and pedestrian boulevard. The idea involves adding raised intersections, rain gardens, new signage and other alterations to make the street as welcoming to non-motorized traffic as it is to cars.

Begun more than two years ago, the project is shifting from the preliminary to final design phase, with construction tentatively planned in 2024 to 2025. The current budget estimate is $4 million, with a little over $3 million coming from federal grants, Deputy Public Works Director Cindy McCormick said. 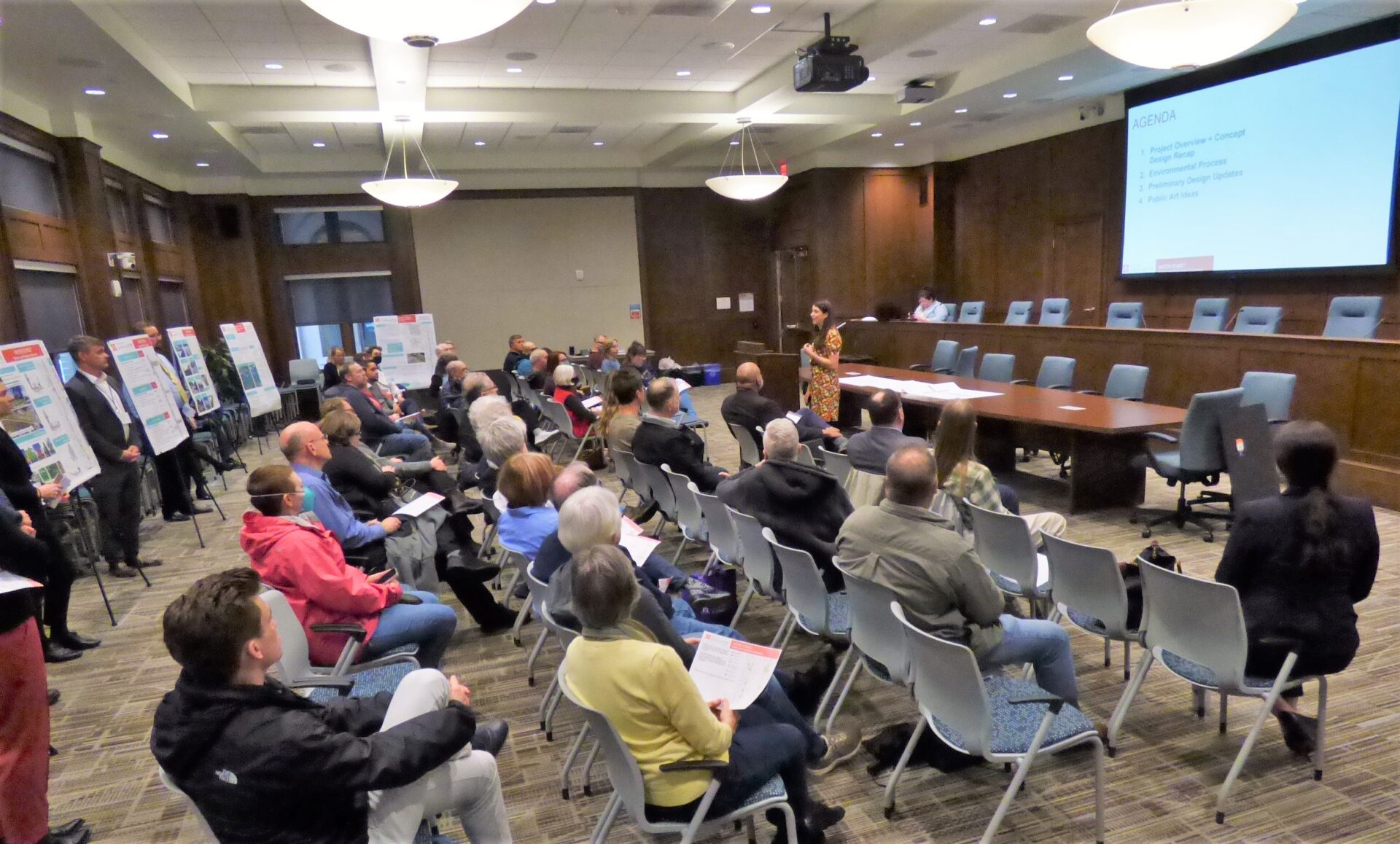 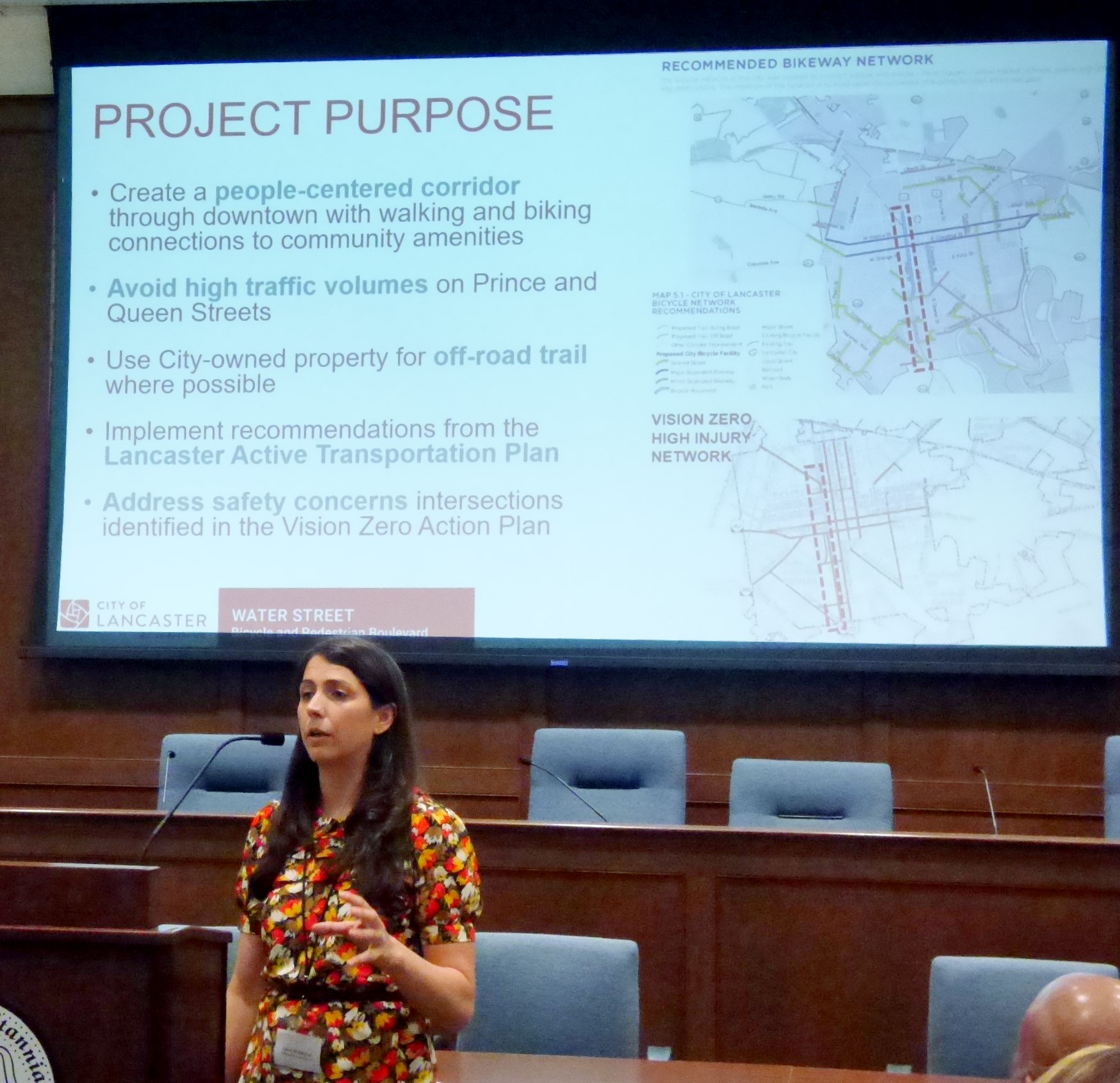 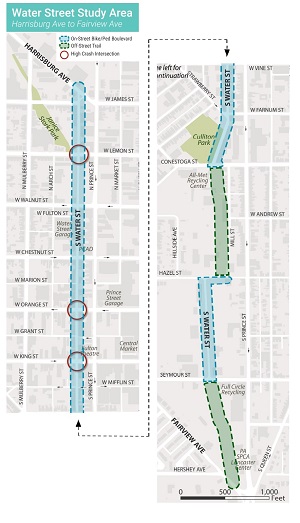 The proposed work extends along Water Street from Harrisburg Avenue to Fairview Avenue. Click to enlarge. (Source: City of Lancaster)

Kittelson & Associates is the lead consultant on a team that includes experts in transportation, environmental engineering, stormwater management and more. On April 7, they showed the outcome of their preliminary planning to an intensely interested audience at City Hall.

Work is planned along the full length of Water Street from its north end at Harrisburg Avenue to its south end at Seymour Street. From there, a bicycle and pedestrian path will continue south to Fairview Avenue, one of two off-street segments that are planned. The other is between Conestoga and Hazel Streets.

The team envisions lowering the speed limit on Water Street to 20 miles per hour, and encouraging slower travel with speed bumps and curb bump-outs abutted by rain gardens at intersections. The rain gardens will absorb stormwater, a component of the city's efforts to comply with a federal consent decree to limit overflows from its sewer system.

Crossings will be overhauled with the addition of raised tabletop intersections, high-visibility piano-key crosswalks, bicycle lane markings and pedestrian and bicycle signals. 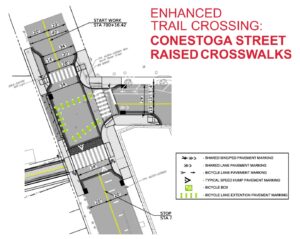 Proposed changes at the intersection of Water Street and Conestoga Street. Click to enlarge. (Source: City of Lancaster)

The changes are expected to reduce the number of vehicle crashes on Water Street, of which there were 131 from 2015 through 2019. Though none were fatal, 55 resulted in injuries. Three Water Street intersections — the ones at Orange, King and Vine streets — are among the city's most frequent crash sites.

The two off-road segments are envisioned as park-like corridors with lighting, benches and bike racks. The team is seeking input on the "style palette" for those component, with possibilities including, traditional, modern or industrial.

Crash reduction is an ancillary effect of the main goal, which is creating a comfortable, safe and accessible corridor for everyone, no matter their mode of travel, said Stephen Campbell, city public works director.

In general, audience reaction to the plans appeared positive, though one man raised questions about the cost, and Tracy Artus, owner of Miesse's Candies, worried about truck access and the effect on business if Water Street closes more frequently for events. Mostly, speakers made suggestions, such as designating the corridor as "local traffic only," promoting it as a retail destination, ensuring good signage and connectivity with the rest of the city's network of bicycle lanes and installing a bicycle repair station or two.

The city continues to solicit public feedback on the plan at the Engage Lancaster website.