The COVID-19 pandemic sharply increased its impact on Lancaster County residents in the past week, sending a record number of patients to area hospitals. New infections also hit their highest level since the beginning of the pandemic in March.

But, in contrast to some cities and counties in other states, Lancaster County hospitals still have sufficient drugs, equipment and – most importantly – hospital bed capacity. Their greatest challenge is maintaining adequate staffing levels.

The number of hospitalized COVID-19 patients has more than doubled in the first three weeks of November.

Between Nov. 1 and 21, the number of patients hospitalized at Penn Medicine Lancaster General Health and Wellspan Health Ephrata increased 150% from 40 to 101.

The low point in hospital cases occurred Sept. 20, when just seven patients were in the two hospitals.

The previous high was 56 hospitalizations on April 28.

At a LGH board meeting Thursday, Dr. Michael Ripchinski said the hospital used the lull in past months to build stocks of pharmaceuticals and personal protection gear so that it has adequate supplies for this new wave of illness. The hospital also has contingency plans to provide additional beds beyond those in its current COVID-19 units, should the need arise.

His remarks on preparations echoed those of Ryan Coyle, a spokesman for Wellspan Health Ephrata, who last week said that hospital is prepared to double its ICU beds, if needed, and can shift patients among its six regional hospitals if a localized outbreak pushes any one hospital to capacity.

The county’s third hospital, UPMC Lititz, has not been willing to provide information on the number of its COVID-19 patients. Spokeswoman Kelly McCall did say the hospital is seeing an increase in COVID positive patients, but fewer needing ICU care. The UPMC system has “robust” plans in place to increase capacity, using transfers of patients, if necessary, among its 40 facilities, she said.

A further indicator of the ability of county hospitals to meet the surge in COVID-19 patients comes from the state Health Department. Today its dashboard shows that 119 medical beds, 11 ICU beds and 14 airborne isolation beds remain available in the county, according to filings it receives daily from county hospitals.

Still, the death toll is already more than double the rate in September, when the pandemic had receded and just 13 died in the county during the entire month.

There were no virus-related deaths in 43 (54%) of the county’s 60 municipalities.

The risk of catching the virus and dying from it remains very low for those under age 80.

HOWEVER, if a person does catch the virus, the risk of death increases significantly. Since March, there have been 13,920 confirmed cases of COVID-19 and 475 virus-related deaths here.

In other words, about 1 in 30 individuals (3.4%) who tested positive for the virus subsequently died from it.

To complete the case rundown:

The Lancaster ZIP code areas had per capita rates ranging from 7.7 to 8.3 per 1,000 residents.

The landscape of treatment and recovery for COVID-19 patients had changed substantially in the past nine months.

In April, when most patients were going to LGH, the patient count in that hospital rose from 25 to 39 in the first three weeks of the month. During that same time period, 112 county residents died, most of them in nursing homes who never got to the hospital.

In the same time span this month, the patient count has risen to 101, 2½ times the April caseload and yet the death toll is about a quarter of what it was in that first full month of the pandemic.

That dramatic change illustrates how much doctors and nurses have learned about treatment of the disease in the past eight months.

Former patients have been generous with plasma donations, Dr. Kontra said, and the hospital has more than 100 units stored for future use.

Is the COVID-19 virus greatly different from seasonal flu of past years?

County and national statistics suggest that it is.

In the 2019 Lancaster County Coroner’s Report, Dr. Stephen Diamantoni reported that 89 area residents died of all respiratory illnesses, which would include flu. In the 10¾ months of this year, 475 have died just of COVID-19.

In comparison, since March, an estimated 257,000 people have died in the U.S.

In spring, nursing and personal care homes were the epicenter of the pandemic. Scores of residents died as nursing personnel and health officials struggled to come to grips with a new virus especially harmful to the elderly.

Now the status of area congregate homes is much improved.

So far this month, nursing homes reported only three new cases – and no deaths – among their residents. There were, however, 36 new cases among staff members.

This positive picture, however, may be distorted by the absence of some facility reports on the state Health Department website. This week, the state site indicated that eight of 32 nursing homes had not filed a report:

Reports for four facilities have not appeared on the state website since the pandemic began: Manorcare, NewPort Meadows, Rose City and Susquehanna Valley Nursing.

Nate Wardle, a spokesman for the state Health Department, said health officials are working with nursing homes to ensure that they report accurate, cumulative data on their residents.

Some facilities have had issues using the state’s data reporting system, he acknowledged, adding that department officials “are continuing to work to get as many facilities as possible reporting.”

Note 1: The full board meeting of Penn Medicine Lancaster General Health can be viewed here. The COVID-19 discussion begins at 33 minutes, 45 seconds.

Note 2: The data charts of county deaths, hospitalizations and cases maintained by researcher Erica Runkles can be viewed here. 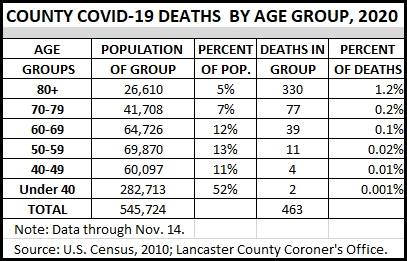 The number of hospitalized Covid-19 patients – the second most important index of the pandemic’s health impact –has nearly doubled in the first two weeks of November.

Between Nov. 1 and 14, the number of patients hospitalized at Penn Medicine Lancaster General Health and Wellspan Health Ephrata rose from 40 to 77. (As of Monday, Nov. 16, there were 80.)

The number of patients at LGH alone – 66 – is higher than at any time since March. The previous high was 56 hospitalizations on April 28.

According to state Health Department, the county has 80 medical beds, 18 intensive care unit beds and 11 airborne isolation, a total of 109 beds. If the health department’s report is accurate, county hospitals were at about 70% of capacity for COVID-19 patients on Saturday (73% on Monday).

Those numbers, however, appear to reflect the hospitals’ traditional, pre-pandemic capacity and do not include measures the facilities have taken since March to provide additional beds for COVID-19 patients.

Ryan Coyle, a spokesman for Wellspan Health, said Ephrata hospital in fact has 122 acute care beds, including 10 critical care (ICU) beds. If necessary, the hospital can expand those 10 ICU units to accommodate 20 critically ill patients. WellSpan Health has six hospitals, he added, and if one hospital reaches capacity, patients can receive care at any of the others.

John Lines, a LGH spokesman, was asked to confirm that facility’s capacity for COVID-19 patients. We will update this report if and when that information becomes available.

Whatever the LGH response, it appears clear that hospital capacity here is significantly above that reported by the Health Department.

Lancaster County hospitals, clinics and doctors reported 2,164 positive COVID-19 tests during the first two weeks of November, more than the total in October (1,968) and September (1,279).

Shane Weaver, president of Lititz borough council, said he knows of no obvious reason for the rising number of cases in that town. People wear masks in the shopping district, he said, and there has been no report of an outbreak. One possibility, he said, might be cases at the five nursing homes that are within the Lititz postal area.

Nursing and personal care homes also may account for the rise in cases in other towns, but state Health Department reports on those facilities are incomplete, making such a determination impossible.

To complete the case rundown:

For perspective, in all these areas, about three to five residents out of every 1,000 (fewer than 1%) tested positive – during the past two weeks. And, as Dr. Anthony Fauci, the CDC’s top pandemic expert, has stated, about 80% of those who test positive do well without any specific medical treatment.

This report has been compiled from records of the Lancaster County Coroner’s Office and the state Health Department by researcher Erica Runkles, sociologist Mary Glazier and journalist Ernest Schreiber. The data chart maintained by Erica Runkles can be viewed here.