More county residents than ever contracted COVID-19 in December, and more than ever were hospitalized.

But unlike in previous surges, fewer deaths occurred last month, a positive trend that suggests improving hospital treatment and vaccinations are reducing the most serious consequences of the pandemic.

Similarly, the number of county residents ill enough to require hospital care also reached a record high in December. An average of 165 people were under treatment daily at the county’s three hospitals throughout the month. That case load was well above the previous high of 152, recorded a year ago in December 2020.

In contrast, however, the 133 COVID-19 deaths here last month were substantially below the 207 deaths that occurred in December 2020.

What accounts for increased case numbers and lower deaths cannot be known for sure. Vaccinations, designed to reduce the incidence and severity of cases, almost certainly played a role. (An analysis of 569,000 cases by the Centers for Disease Control and Prevention in September showed vaccines reduce the likelihood of death tenfold.)

The Omicron virus variant also may help explain the trends. It reportedly spreads rapidly but is less severe than past variants. That would account for higher case numbers and relatively fewer deaths.

But the high number of hospital cases suggests that the more lethal Delta variant still is active here. If the mild Omicron variant had taken over entirely, hospital cases should not be rising to a record level.

At Lancaster General Health, the county’s largest hospital, about 80% of new COVID-19 cases detected at its lab have the gene pattern suggestive of the Omicron variant, spokesman John P. Lines said Tuesday.

The CDC estimates that the Omicron and Delta variants comprised about 60% and 40% respectively of new COVID-19 cases nationwide through Christmas week.

The fact is health officials in most communities – Lancaster included – do not know for certain the extent to which Delta and Omicron variants are infecting their patients. Few hospitals have the facilities or expertise to conduct genetic sequencing, the test that determines variant types.

That lack of certainty complicates treatment because each variant requires a specific, different antibody drug.

What we do know is what we’ve known for months – that, whatever variant is active, the virus continues to attack the elderly most severely, while the young continue to escape the most serious health consequences.

Of the 133 who died in December, along with 14 previously unreported deaths,

In other words, these county coroner statistics indicate, about 80% of deaths occurred in patients aged 60 and above, and 16% were in their 40s or 50s.

No child of school age, under 20, has died here from COVID-19. (Neither hospitals nor the state Health Department makes available the number of children hospitalized with COVID-19.)

But it is notable that, for the first time in many months, two individuals in their 20s succumbed to the virus, raising the total in that age group to four. Previously, one person in their 20s died in March 2020 and one in October 2021.

In broad terms, looking at the county as a whole, the risk of death for the individual during the December surge seems small.

So, combining those factors, a quarter of one-tenth of 1% of the county’s population died from the virus in December. On an annual basis, that’s three-tenths of 1% of county residents.

But, because age is a primary mortality factor, it’s more useful to look at risk for each age group. This chart shows that risk based on deaths of county residents since the beginning of the pandemic in March 2020: 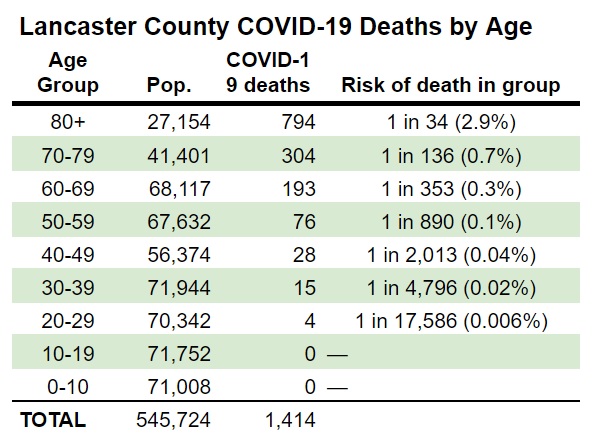 This analysis is not intended to downplay the seriousness of the illness or its effects on some who suffer long-term from the virus. But it does put into perspective the most serious consequence as a guide to both the young and old on the risk they face during this pandemic.

Judging by case numbers, the December surge has hit two ZIP Code regions of the county – the northeast and northwest – especially hard, while touching the south only lightly.

The high-end regional case counts per 1,000 residents were:

The metropolitan area was impacted moderately. The ZIP code areas of Lancaster city and its suburbs ranged from 19 to 22 cases per 1,000 residents.

It’s likely that the low case numbers of the southern county are attributable to the preponderance of Plain Sect families in these areas. Whether the low numbers there reflect lack of interest in COVID tests or natural herd immunity in the community is unknown.

The state Health Department reported 506 children, ages 5 to 18, tested positive for the virus in the last week of December. That’s up substantially from 280 weekly in November.

Across the 17 school districts of Lancaster County, those cases averaged about 30 students per district each week.

Since the beginning of vaccinations, a year ago, 294,537 county residents, 58%, have been fully vaccinated. Another 7% are partially vaccinated.

The county has the 24th highest vaccination rate among the Commonwealth’s 67 counties. Montour County is highest with an 86% rate. Fulton County, at 33%, is lowest.

There are significant differences in full vaccination rates among age groups, races and genders, although not ethnicity: 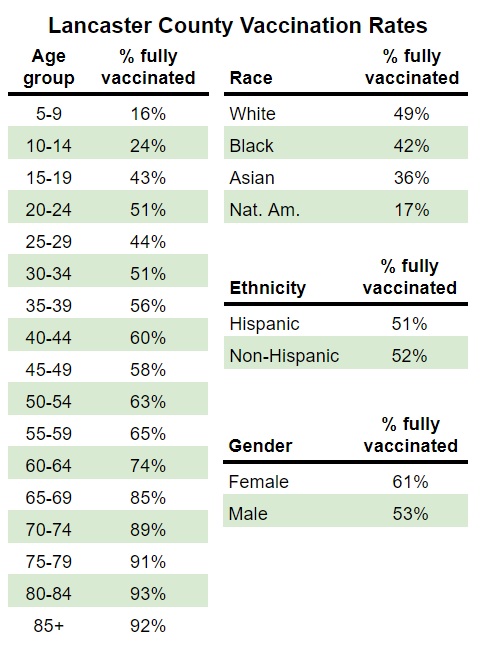 The surge patterns reported here have continued into January. There has been an average of 188 COVID-19 patients in area hospitals during the first five days of this month. Seventeen deaths residents have died of the virus in that time, 15 aged 60 and above.