The COVID-19 pandemic continued its slow, steady decline in the August.

The virus took the lives of 29 county residents during the month, down from 35 in July and less than one-sixth the number of victims – 183 – who died here in April at the height of the pandemic.

As throughout the pandemic, the virus attacked the elderly most harshly. The age ranges of all 413 victims from March through August, according to the Lancaster County Coroner’s office, are:

Those percentages are identical to a month ago and little changed from the outset of the pandemic.

In August, it is interesting to note, there were 15 days with no deaths. But there were three mini-spikes – strings of several days when seven or eight individuals died as the virus swept through care homes that previously had escaped infection.

Persons age 70 and over accounted for 26 of the 29 deaths last month. One victim was in his 60s and another in his 50s. There were no deaths under age 50.

“No one young and healthy has died,” Coroner Stephen Diamantoni said.

The few victims under age 40 who died in the early months of the pandemic had other health problems without exception, he said.

The bottom line: Among the vast majority of county residents – those who have no major health problems and live outside personal care or nursing homes – there have been no deaths.

The number of patients treated for COVID-19 at Penn Medicine Lancaster General Health and WellSpan Health Ephrata dropped slightly in August. The daily caseload for the two hospitals averaged 26 patients in August, down from 31 in July.

Not surprisingly, most of those hospitalized with COVID-19 infections were elderly. The average age of these patients at LGH was 77. (WellSpan Ephrata does not report ages.)

For the second month in a row, it is important to note, the decline in deaths has occurred while hospital cases remain steady. Those trends suggest that local hospitals continue to improve their care of COVID-19 patients and save an increasing percentage of them.

As a side note, national media briefly focused a week ago on the use of convalescent plasma as a treatment for COVID-19 patients. It’s a treatment that has been used here, with positive results, throughout the pandemic.

To date, about 70 patients have received the treatment, she said.

Because convalescent plasma is most often used with other treatments, the benefit of plasma by itself is difficult for any one hospital to determine, Eckard said.

“However, national data from over 50,000 COVID-19 plasma recipients have demonstrated a reduction in the death rate when given early in the hospitalization,” she said.

Plasma has been used to assist in treatment of a wide variety of illnesses over the past century, including diphtheria, measles and the Spanish flu.

At present, the blood bank at LGH has a supply of convalescent plasma, Eckard said. But, because the pandemic continues, more plasma will be needed.

Any patient recovered from a documented case of COVID-19 who has been symptom-free for several weeks can help save lives by donating blood, she said. The hospital’s plasma donation office can be reached at (717) 588-1145.

Lancaster County hospitals, clinics and doctors reported 1,206 positive tests for COVID-19 during the month of August, up from 1,083 in July, according to the state Health Department.

The four ZIP code areas with more than 100 cases were, according to daily Health Department reports tracked by researcher Erica Runkles:

On the bright side, six ZIP code areas had no cases in August: Bainbridge, Bird-in-Hand, Holtwood, Pequea, Smoketown and Terre Hill.

Fourteen others had minimal cases during the month:

The 1,206 total cases here are equivalent to one-fifth of 1% of the county’s 545,700 population. Dr. Anthony Fauci, the CDC’s top pandemic expert, has estimated that about 80% of those who test positive do well without any specific intervention. About 20% get seriously ill.

Throughout the pandemic, nursing and personal care homes, many located in the Lancaster metro area, have accounted for a preponderance of deaths and hospitalizations. More recently, the county prison has become a source of a significant number of new cases (91 since Aug. 20, according to LNP), adding to the already high case numbers in the 17602 ZIP code area.

As college students return to campus, it is conceivable that further surges of new cases may occur in the Elizabethtown, Millersville and Lancaster areas, where colleges are located.

Spotlight PA the investigative consortium of Philadelphia, Harrisburg and Pittsburgh newspapers, has reported that the state Health Department still has not given the public complete reports on COVID-19 cases and deaths at nursing homes in the Commonwealth.

It found: “Weekly reports released by the Department of Health are consistently missing data for more than 100 of the state’s 693 nursing homes. In at least one case, those omissions obscured a deadly outbreak from the public. While the specific facilities missing data varies each week, 42 have not shown anything for more than two months.

It’s not clear why, week after week, some facilities are still missing the counts.

Finally, all residents of one ZIP code area continue to escape infection, at least so far as testing shows. No one in the Smoketown area, population 129, has tested positive.

Note 1: This summary of the pandemic in August was delayed six days to include the county coroner’s mortality report for the full month. That office’s results from COVID-19 tests typically are not available for two to five days.

Note 2: Erica Runkles' data for August 2020 is below. The original spreadsheet can be viewed online here. 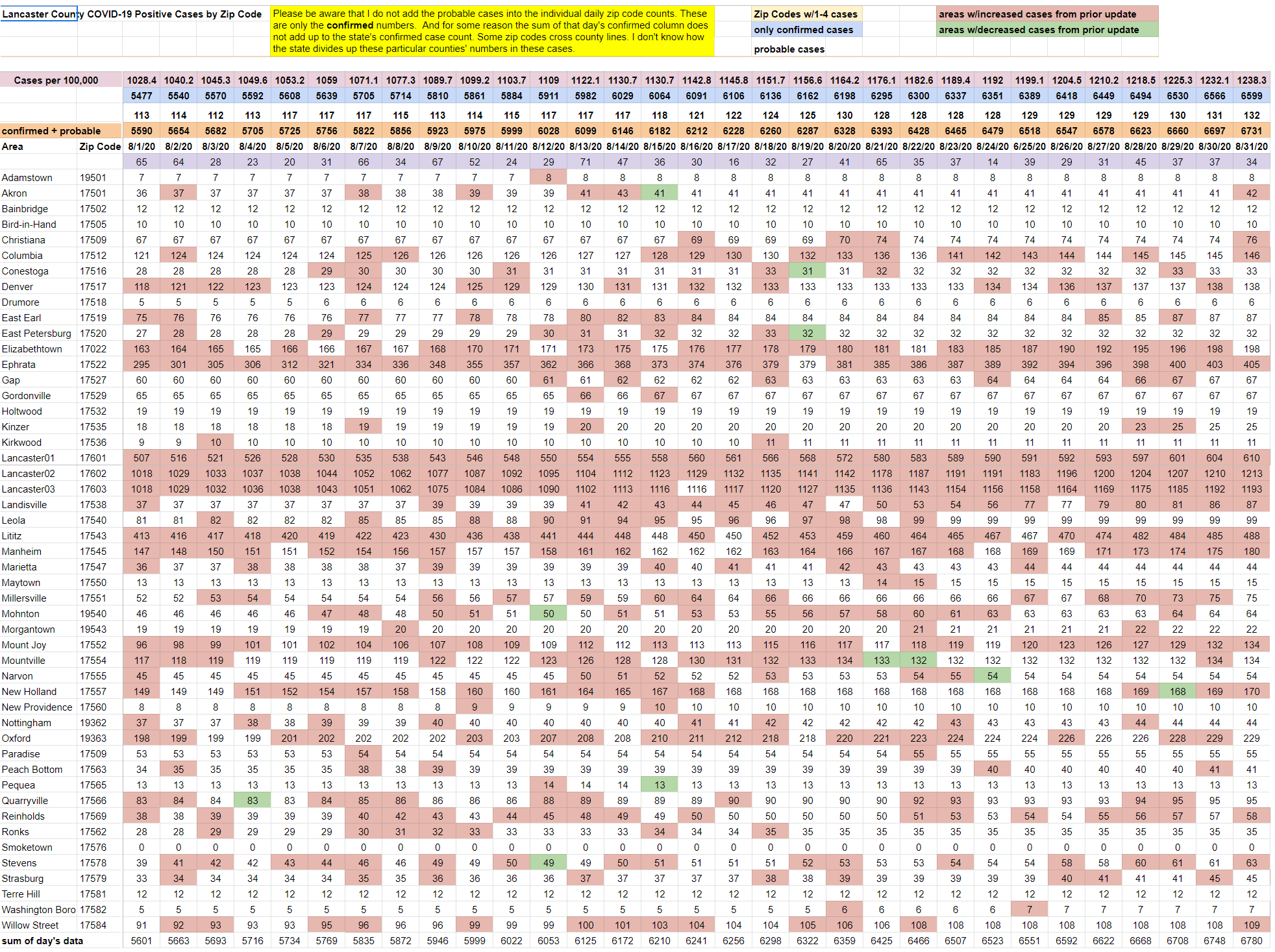