The COVID-19 pandemic escalated in Lancaster County during November, sending a record number of local residents to the hospital and taking the lives of 59 victims, more than doubling the previous month’s fatalities.

Since the pandemic began, 507 county residents have died, nearly six times the 89 people who died of all respiratory ailments in 2019.

In past years, about 10 to 12 county residents died of flu alone, Dr. Stephen Diamantoni, the county coroner, said.

As throughout the pandemic, the COVID-19 virus struck hardest at those age 70 and older. About half (29) of the 59 deceased residents were age 80 and above. Nineteen were in their 70s, seven in their 60s, three in their 50s and one in his/her 40s. No one age 40 or under died in November.

According to the state Health Department, 12 of those who succumbed live in the Denver area, where an outbreak hit a Stevens area nursing home. The residences of the other victims were:

There is no question that the virus continues to strike hardest at the elderly while sparing the young from its deadly consequences. 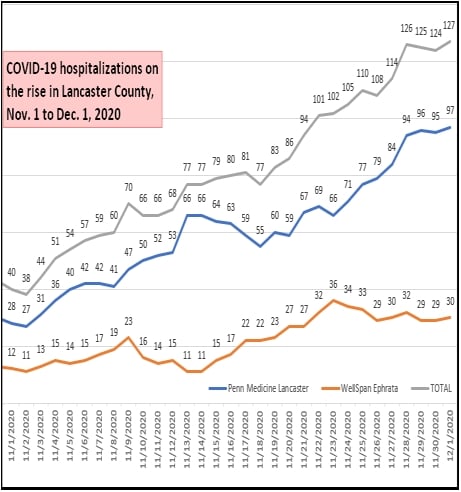 The number of hospitalized COVID-19 patients tripled in November from 40 on the first day of the month to 124 on the last. In September, the number of county patients had dropped to its lowest point, with a total seven patients at Lancaster General and Ephrata hospitals.

Still, although the number of serious COVID-19 cases continues to rise, hospitals here do have available beds.

The state Health Department reported 63 medical beds, 12% of the total, remain open. In addition, there were 13 intensive care unit beds still available, 17% of the total.

It should be noted that the 124 hospitalizations do not include any patients at UPMC Lititz. That hospital, without explanation, has declined to provide the public with its COVID-19 patient count, despite multiple requests.

The risk of death has been low for those under age 70 during the past eight months of the pandemic.

But the risk of dying from the virus has been significantly higher for older persons – roughly 1 in 500 for those in their 70s and 1 in 77 for people age 80 and older. 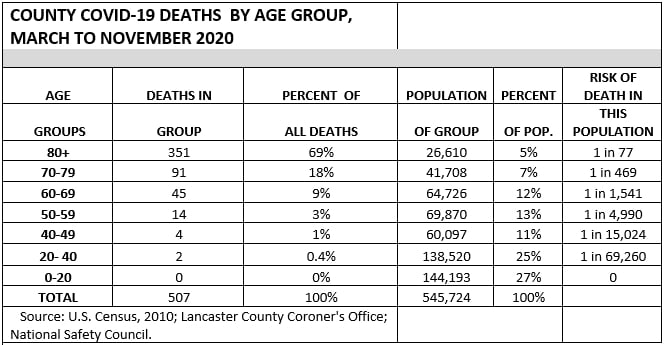 Those measures of past rates of mortality should not be taken as certain indicators of the future. The arrival of colder weather and participation in holiday events are new factors that could change future rates of infection and serious illness.

And, although the risk of catching the virus and dying from it remains low, when a person does become ill from the virus, the risk of death rises considerably.

Since March, there have been 16,702 confirmed cases of COVID-19 and 507 virus-related deaths here.
In other words, about 1 in 33 individuals (3%) who tested positive for the virus subsequently died from it.

Dr. Diamantoni said he believes a certain complacency has set into the county population.

People think that because they don’t know anyone who has gotten very sick or died from the virus, that it doesn’t really affect them, he said.

Hospital and clinic testing sites reported that 6,559 county residents tested positive for COVID-19 in November. That was the largest one month gain of the pandemic. Slightly more than 40% of all pandemic cases this year, 16,226 of them, occurred during the past 30 days.

The top five areas for new cases in November were:

Two small towns, however, saw the largest per capita number of new cases:

Those relatively large infection rates are more an indication of the towns’ small population than the severity of the pandemic in their communities.

In broad terms, excluding those two exceptions, about 0.5% to 1.5% of the population in every area of the county contracted the virus.

Most county nursing homes reported few new cases, one to three, during November, according to the state Health Department.

The major exception was The Gardens at Stevens, an 82-bed nursing home that had successfully kept COVID-19 out of its facility from March through October.

In November, however, the virus swept through the home, as it had done in many other homes this spring, taking the lives of 12 residents, Dr. Diamantoni said.

He described the residents as “very elderly, very frail.”

Cumulatively, 34 staff members at the home tested positive since September. The virus did not reach residents, however, until November and then, by the end of the month, 65 residents contracted the virus, according to state health records.

(The state does not provide exact numbers when case counts are under 5.)

There were 14 staff cases and four resident cases at area personal care homes at the end of the month.